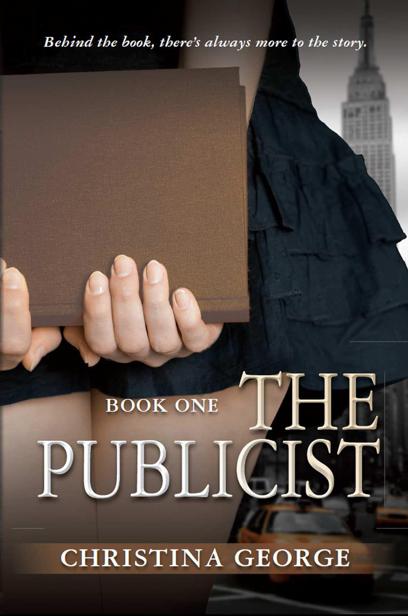 To Grace, for getting me
through the dark days

Katharine Mitchell studied the printout in front of her when her phone buzzed.

“Kate, we have an emergency on our hands! Haley is on a roof and threatening to jump.” It took Kate a minute to absorb what the caller was telling her. Haley…suicidal?

“Oh Jesus,” she mumbled. The air seemed to get sucked out of her lungs. Suddenly she couldn’t breathe. Grabbing her purse, she raced out of her office and through the hall. She should have seen this coming. The news hadn’t been good. Haley was fragile. This must have been all it took to push her over the edge.

Outside, Kate waved her arms frantically until a cab came to a screeching stop.

“Fifth and Broadway,” she said, out of breath. Kate’s deep, brown, wavy hair tousled in the wind. We’ll never get there in time, she thought, staring into a sea of cars. Midday midtown traffic was in full swing. Kate’s purse buzzed. She pulled her iPhone out of its pink leather case. A gift from her ex-boyfriend. She made a mental note to replace it. She tapped a key, “Yes?”

“Kate, it’s Pete. Where are you? The police called again. She’s screaming your name and crying, they brought in a negotiator but it seems like it’s only made things worse.”

“Can you speed this thing up?” Kate yelled over the foreign music that blasted from the cabbie’s radio.

He looked over his shoulder and shrugged, “I try.”

“Someone’s going to die if you don’t! If she jumps, it’ll be on your head. You’ll have crappy karma follow you around for the rest of your life.” That was the ticket. The cab driver slipped down a side street and soon they were speeding toward Haley. Kate hoped they wouldn’t arrive too late.

“Pete, tell the police I’m on my way. If they wanted me there quicker, they should have sent a freakin’ helicopter.” Kate shoved the phone back in its case. Pete bugged the crap out of her. Like he even cared what happened to Haley, she thought, as she watched the cabbie make record time through the streets of Manhattan.

Suddenly the cab came to a grinding halt. “We’re here,” the taxi driver announced out of breath, as if he’d been running beside the cab instead of driving it.

“But we’re not anywhere near the building!” Kate insisted.

“Look!” The man pointed ahead of him to the police barricades that blocked the streets, “We go no farther, you get out here.”

Kate tossed a twenty dollar bill over the seat and jumped from the car. She headed straight for the police cars, ran through the crowd, heading past the onlookers and straight into the arms of a New York City police officer.

“Ma’am,” the officer said, gripping her arm, “this area is closed off. We have a situation on the roof. You’ll have to go around.”

“I know you have a situation! Someone called me to tell me the girl who’s threatening to jump asked for me; I’m Katharine Mitchell.”

“Just a minute.” The officer clicked on his radio, calling to someone named “Jim” on the roof. Kate had a hard time hearing what was being said over the street noise, but a minute later the officer was pulling her through the crowd and escorting her up to the roof. Then she saw Haley. She looked frail and alone and perched dangerously close to the edge of the roof.

“Haley dear, it’s me, Kate. They say you’ve been asking for me.”

A pair of sleek new Prada pumps turned and Kate could see Haley had been crying.

“I can’t believe this happened!” she wailed.

“I know Haley, but we’ll get past it, I promise.” Kate noticed that even in her darkest hour, Haley was still impeccably dressed. Her sleek Channel suit wasn’t even creased. If Haley did jump, she wanted to look her best. How does one decide what to wear to a suicide? Kate pondered.

“I’ll never get past this—I’m ruined! Oprah canceled on me! No one will ever speak to me again!”

“Haley listen, it happens. It’s not your fault; certainly your friends will understand that.”

“You don’t know my friends,” Haley sniffled, “I’ll be the laughing stock. One minute I have a book that Oprah’s selected for her new show and the next I’m cast aside, discarded by some lowlife producer and replaced by some bleeding heart novelist.”

Kate rolled her eyes, Jesus, this girl. If she wasn’t so close to the edge of the roof, Kate would rush over and give her a good wallop. Oprah was off the air but her name still sounded like magic to many authors. Despite the failing ratings of her network, she still forged on and Haley was supposed to be part of a new show the network was rolling out. The trade heralded it as Oprah’s comeback.

“Haley, the guy Oprah picked rescued like a hundred orphans from potential genocide in Africa.”

“So?” Haley snorted indignantly, “I wrote a good book too, a great book, probably better than his.”

Yes, she had written a good book, a very good book. Despite her obvious shallow side, Haley could most definitely write. But her sugary-sweet chick lit novel was no match for bravery in South Africa.

“Haley, listen, there will be other shows. We can keep pitching the book. It’ll be ok.”

“No it won’t!” she screamed. “She’ll never reschedule, will she?”

“But I bought Armani!”

Kate was silent for a moment, a line of officers standing behind her. She wasn’t sure what Haley was talking about.

“I bought Armani for the show. An outfit, you know,
clothes
?” Her sarcasm was dripping and it was all Kate could do not to slip her foot in front of one of Haley’s expensive shoes and topple her off the roof. Kate thought for a moment about leaving Haley on the ledge and walking over to the nearest bar to watch the rest on TV while she sipped a Cosmo. But she didn’t, she stayed. She couldn’t, after all, let Haley jump.

“Haley, listen. I have a plan, one that will get you right back on top. There’s a movie premier here next week I think I can get you invited to. We’ll get you photographed with George Clooney. You’ll be on Page Six and probably on
Entertainment Tonight
. I can shoot for Piers Morgan, we can talk about your glamorous life, your exhilarating writing career; it’ll be great.”

Haley turned to face her now, taking a step away from the ledge, “A movie premier, really? And Piers, too? I like him. Can we do
The View
too?”

Kate bit her bottom lip, she knew better than to make promises but she needed to get Haley away from the ledge, “Yes, of course we can. Won’t that be fun! All those women fawning all over you, chatting up your book?”

Haley’s eyes got a far-off look and Kate knew she was already picturing herself on the show, being adored by Baba Walters. Suddenly Kate wanted to hurl.

“Come on, Haley, let’s go back to my office so we can plan this.”

Haley hesitated for a moment and then gradually started moving toward Kate. Instantly the police surrounded her, guiding her to safety.

“Thank you, Kate.” Haley smiled, she was in her element surrounded by a bunch of men in uniform, “I’m tired from all of this. I’m going to head home. Will you let me know what you’ve booked for me? You can call me later.”

And with that she was gone, being hustled away. Kate stood on the roof for a moment, contemplating a jump herself. God, that girl was a piece of work, she thought.

“Miss?” a tall, handsome police officer leaned into her, “you were great, you really knew what to say to calm her down.”

“Thank you.” Kate said in almost a whisper.

“May I ask who you are? Her friend, sister, lover?”

“None of the above.” Kate’s mouth turned into a slight smile, “I’m the publicist.”

“So, I hear Haley’s a jumper.” Pete’s lips curved into a sarcastic smile.

“In case you didn’t hear, she did not jump.”

Fuck you, Pete, Kate thought as she walked into her office and slammed the door. Unfortunately Pete was right. It was all over the news. “The publicist who saved the crazy, suicidal author”—that’s how
Entertainment Tonight
had headlined the story the night before. Both Leno and Letterman had devoted most of their monologue to it and Haley had even made the high-brow NPR.

Kate slumped in her chair, not sure what to do next. In her ten years of being a book publicist, she’d saved a number of books from ruin, but Haley’s might just be too far gone. Sure, they’d sell a few thousand from people wanting to read a book written by the “crazy, suicidal author,” but after that it would be over and unless she did something fast, Haley would be nothing more than a cocktail party joke. “Hey did you hear the one about the author who jumped off a building?”

Kate’s phone buzzed but she didn’t answer; she knew without checking the caller ID that it was Haley’s agent calling to see what her brilliant plan was. “Brilliant” Kate said to a still ringing phone, “I have no idea how I can rescue this one.” Kate spun around and faced her floor-to-ceiling window. A view that overlooked Central Park was one she normally enjoyed, but today it was nothing more than a bunch of green and people buzzing about. Kate was certain if she didn’t get Haley a gig on a reputable show, Haley’s career as a writer would be over. By reputation, Kate knew that
The View
was off the list—they’d pull Haley limb from limb. Though Katie Couric’s new talk show might be a possibility. Though the ratings were still underwhelming, Katie was climbing in popularity.

Suddenly, Kate reached for her phone and punched in a number.

Kate took a deep breath, “Tom, Kate here, how are you?” She tried on her best Mary Poppins’ cheer. Tom wasn’t falling for it.

“Kate, if you’re calling to see if I’ll put your jumper on Piers Morgan, you can call someone else. Piers isn’t interested.”

“She’s not a jumper, Tom and it’s a good story. I mean think about it: Piers could focus on the pressure of the business, the dark side of publishing. We could have James Frey on there, I’m sure after Oprah went off on him, he could say a thing or two about this topic, he would probably tell Haley on live TV to stay as far away from Ms. O as she can, wouldn’t that make for great TV?”