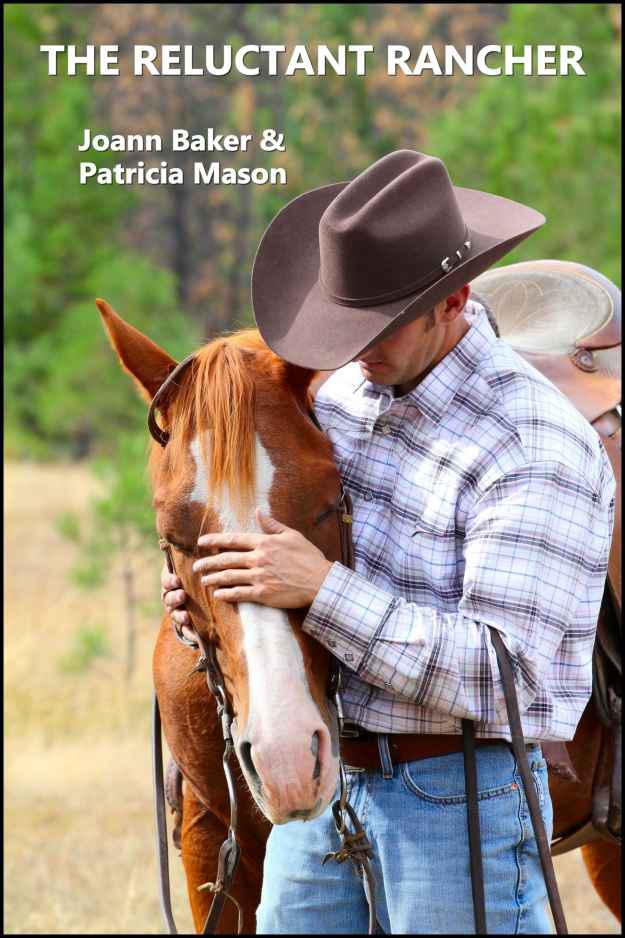 This eBook is licensed for your personal enjoyment only. This eBook may not be re-sold or given away to other people. If you would like to share this book with another person, please purchase an additional copy for each recipient. Thank you for respecting the hard work of this author.

This book is dedicated to the two women

who give us unconditional love, now and forever,

Mary Carter finished her exam of the two month old infant and handed the beautiful baby girl back to her mother.
“She’s doing great, Jennifer, but how’s Mommy?”
A registered nurse and the owner of a home health agency, she had provided assistance a
fter her best friend had
came down with a nasty case of the flu just days after giving birth. Today marked her last official visit to the Talbot household.

“
I’m fine,
”
Jennifer assured her.
“
But I don’t know how I would have coped if you hadn’t been here, especially during those first few weeks.
”

Mary smiled and packed away her stethoscope in an old-fashioned black doctor’s bag
that
Jennifer had given
as a present to
her last Christmas. Moving to
Fiddler Creek
,
Wyoming
, had proven to be best thing she’d ever done. N
ot only did she have her
best
friend close at hand
,
but the town and its people felt like home. It would be the end of her world if she had to leave.

She
tried to push her worries to the back of her mind
as she w
atched Jennifer smile and coo at her daughter as
she placed the baby back in her wooden crib
. She knew her business would succeed, but she needed an influx of money – and fast. And her plan to get that money literally had her shaking in her boots
.

“
Much as I love you and Jessica, I did come here with an ulterior motive.
”
Mary grimaced as she spoke.
“
My car is in the shop again and I need to borrow yours to drive out to the Tanner ranch.
”

“
The Tanner ranch!
”
Jennifer exclaimed loudly, startling the drowsy infant.
“
Whatever for?
”

“
Why do you think? Money.
”
She continued quickly before Jenny could utter the words Mary knew she wanted to say.
“
I don’t have much of a choice. The banks won’t loan me money and my application has been with the Small Business Administration for months now. My hands are tied. If I don’t get some working capital, and soon, I’ll be out on the street and everyone who works for me will be out of a job.
”

Even though
patients were plentiful
, reimbursement from insurance companies came in slowly. And with all
of
the start-up costs inherent to a new business, some weeks she barely made payroll. She couldn’t remember the last time she’d received a full paycheck. To make matters even worse, last week her landlord had cal
led and raised the rent on her office building
. No way did she have the money to pay more rent. Because of her cash flow problems, the small space already doubled as her office and home. Thank goodness it had a small
efficiency
apartment upstairs.

The higher rent, intermittent payments
,
and unexpected expenses meant taking out a loan until the business
began operating
in the black, something Mary predicted happening in just under a year. Yesterday the banker at United Trust had politely, but firmly, put paid to the idea of a conventional business loan. So that left only one alternative – Luke Tanner, the richest man in the valley.

“
Mary, are you sure you want to ask Luke? You know how he gets when people ask him for things.
”
Jennifer’s expression said it all. Many good citizens of Fiddler Creek had felt the sting of the rancher’s razor sharp tongue after approaching him for help with one community project or the other. When it came to charity, Luke really only tolerated Mark, Jennifer’s husband, and his notorious do-good deeds.

“
Remember the summer camp for kids?
”

“
Don’t I ever?
”
Last year the reclusive rancher had grudgingly allowed the county to run a camp for underprivileged kids on an unused parcel of the Circle T. Far away from the main house. When the counselor had suggested Luke come out and give riding lessons he’d refused, saying he had better things to do than teach a bunch of smart-assed juvenile delinquents how to be horse thieves.

It said something, though not much, that the man allowed the county to use the
land free of charge. And loaned his own
cowboys to give riding lessons. But then, maybe the rich rancher just needed a tax write-off. Not that her proposition could be deemed a charity case, Mary thought quickly. Hers was a legitimate business venture which would prove very lucrative given time. But time was a luxury she could ill afford.

Mary’s stomach tightened into knots just contemplating asking the meanest, orneriest man in the county for a big chuck of change. And based on what? The fact that she, Mary Carter, thought she deserved it? She had never thought herself worthy of anything in her life, never ‘up to standard’. S
he always felt s
omeone prettier or smarter or just plain better always lurked in the shadows ready to step into her shoes.

And d
espite Mark’s steadfast friendship with the man and the small amount of evidence to the contrary, Luke Tanner was a mean son-of-a-bitch by anyone’s standards. Plus it didn’t help matters that she had a full-blown crush on the hard-nosed rancher.

She sighed, remembering how disappointed she’d been
last summer on the rare
occasions Luke had graced the camp with his presence. Naturally, he’d overlooked her just like
most
every other man ever had. Not that she’d expected fireworks and rockets and an instant proposal of marriage. She’d long ago accepted the fact that she would never be one of those small, dainty women that everyone seemed to find so attra
ctive. She stood five-foot-five
in her stocking feet and carried more weight on her frame than recommended by the height and weight charts. As she
’d gotten older, she ha
d finally found a semblance of peace with her size
,
but not before spending many long, lonely years.

Not that she could be called a slouch in the romance department by any means. In fact, before she moved to Fiddler Creek she’d had a very active social life.
E
ven though she didn’t have the waif-like figure of a runway model, Mary was
n’t
an
un
attractive woman. Regardless of what the media touted, there were men out there who loved big, beautiful women. She’d had her share of romantic adventures, but they had been just that - adventures. Nothing that ever made her long to stay around for the happily-ever-after, or even for the night. She, like every other woman in the world, large or small, just wanted to meet the man who made her feel beautiful
and special
.

But it wo
uld have been nice if there had been
some flicker of awareness – and dare she even hope – attraction
from Luke Tanner. She hadn’t even told Jennifer about her feelings for the man. Her friend would have ranted and raved
,
saying Mary deserved someone better. But Mary knew who she wanted, not who she deserved. But that, too, was just some hopeless, romantic fantasy.
Sinfully rich
Luke Tanne
r
could have any woman he wanted. And that woman would never be someone like Mary. It never was.

“
Oh, Mary, I didn’t know things were so bad. You know Mark and I would help if we could.
”

Jennif
er’s soft voice broke into her musings
and she smiled, glad for the distraction. That was enough wallowing in self-pity for one day.
“
I know. But you have the boys and this little one to think of.
”

Mary moved across the room, pulling back the pink gingham curtain
s
to look outside. Jennifer and Mark’s house overlooked the valley floor giving her a spectacular view of Fiddler Creek. Again, she thought what a wonderful place she’d found to live and how heartbroken she’d be if she had to leave. For the first time in her life, she finally felt at home, at peace with herself. Not judged on anything but her skills and abilities.

Her childhood had been a constant state of upheaval with a military father who had been transferred every few years. Her brothers and sisters had relished the vagabond lifestyle, but not Mary. The constant moving combined with a weight problem had made her childhood difficult. Made it hard for her to join in, be one of the ‘crowd’. She had always longed for a place of her own. A place to call home.
Now she’d found it.

Mary let the curtain drop back into place and joined her friend at the door.
“
That’s not a good idea, Jenny. If he says no, I don’t want this to come between your family and Mr. Tanner. I’m a big girl and I can take care of this myself.
”

Despite his hard-as-nails reputation, both women knew Luke Tanner provided the house the Talbots lived
in free of charge and made
generous
—and what he thought to be—
anonymous donations which ensured
that
Mark received his salary from the church every month.

With one last look at the now sleeping infant, the women tiptoed from the room.
Mary took note of her friends drooping shoulders.
“
Y
ou look
like you could use a nap
. While you’re sleeping I’ll whip up a batch of my world famous, double-fudge, chocolate brownies.
”

Mary laughed at her friend’s groan of despair at the mention of the calorie-laden treat. Both women knew Jennifer would not be able to resist the chocolate temptation. Or change Mary’s mind about going to the Circle T.

Luke Tanner swipe
d at the stray lock of
hair that had fallen across his brow. Picking up a precut post from the pile stacked neatly against the corral, he wa
lked to the fence line. He frowned
as he caught sight of an old pickup making its way up the long winding road that led to his ranch.

With an approving nod he noted the slight dust trail the truck kicked up. Released from the bitter cold of winter, the rich
Wyoming
soil prepared itself for the renewal of life once again.

But h
is eyes narrowed as he watched the truck approach. Because
of his less-than-welcoming
reputation, not many people deliberately made their
way to the Circle T. H
e could afford to be that way, being one of the richest men in
Wyoming
and the richest man in the little town of Fiddler Creek. Heaving the post in place, he packed the soil firmly around the treated lumber with the heel of his work-worn cowboy boot.

Who knew what the visitor wanted this time? When someone came to call it usually meant he should get out his checkbook and make a donation to the latest fund-raiser, offer the use of his land for some community hoopla
,
or hire some down-and-out drifter looking for a job. Always something. No one ever came to see him, to see what th
ey could do for him. He laughed bitterly. T
he self-pitying thoughts
were
not his
usual style but
lately he’d been
unable to stop them
. He’d felt
out of sorts a lot
lately. Used. Taken for
granted. Put upon.