The Retribution of Mara Dyer 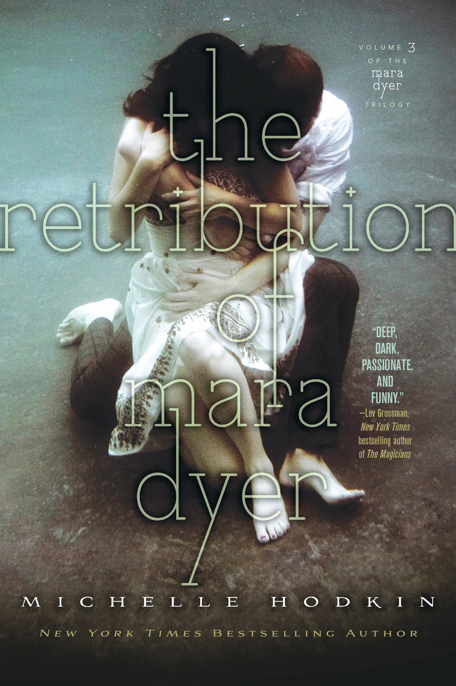 For the bad girls, and the boys who love them

“What is done out of love always takes place beyond good and evil.”

—Friedrich Nietzsche,
Beyond Good and Evil

KELLS: Hello, Mara. My name is Deborah Kells, and this is Mr. ____. We’re here because your family says that you have agreed to residential treatment at the Horizons Residential Treatment Center for Behavioral Health on No Name Island,
Florida, just off No Name Key. Is that correct?

KELLS: How much Amytal did you give her?

KELLS: And the midazolam?

MR. ____: Fifty milligrams. Same as the others. She won’t remember any of this.

KELLS: God, she’s like a zombie. Mara, Mara—are you awake? Do you understand me?

KELLS: Great. Thank you. Is it correct that you agreed to being treated here?

KELLS: Thank you. Now, if at anytime you don’t understand what I’m asking you, just let me know and I’ll try to make it clearer, okay?

KELLS: Now, you’ll notice that there’s a video camera in the room here with us. We want to record this just so we have a record. Is that okay with you?

KELLS: Excellent. Okay, Mara. Let’s start with the basics. What is your full name?

KELLS: And how old are you?

KELLS: Where were you born?

KELLS: Where is that?

KELLS: Thank you. Can you tell me a little about why you’re here?

KELLS: She’s struggling with the open-ended questions. Can we counteract the Anemosyne?

KELLS: Well, she’s not exactly cooperative now, is she?

KELLS: No, let’s see where she goes. Mara, who did you hurt?

KELLS: What was her name?

MR. ____: Her file says that her teacher, Christina Morales, died of anaphylactic shock in reaction to fire ant bites on [date redacted].

KELLS: It’s okay. Take your time. Just tell us what you remember.

KELLS: What else is she on?

MR. ____: The hundred milligrams of Zyprexa, as prescribed prior to intake. It shouldn’t interfere.

KELLS: What did she say?

KELLS: Is she on anything else?

KELLS: Is she on anything else?

KELLS: Does she have a history of epilepsy?

KELLS: Well, do you think or do you know?

KELLS: Turn off the camera.

KELLS: What did you say, Mara?

KELLS: Don’t call anyone. Turn off the camera. What, Mara?

KELLS: TURN OFF THE CAMERA.

T
HE FIRST FACE I SAW
when I opened my eyes was my own.

The wall in front of the iron bed was mirrored. So were the walls to my right and left—there were five mirrors, or six maybe. I smelled nothing, heard nothing, saw nothing but me.

During the past several months, I hadn’t spent much time looking in mirrors, for reasons. Now that I was forced to, I couldn’t quite believe that the girl I was seeing was me. My dark, thick hair was parted in the middle, and it hung limp and dull over thin shoulders. My lips were almost the same color as my skin—that is to say, white. There were angles to
my face that I’d never noticed before. Or maybe they hadn’t existed before. I was looking at a ghost, a shell, a stranger. If my parents saw me, they would never know who I was.

But they never did see me. That was part of the problem. That was why I was here.

But I hadn’t spoken. My lips hadn’t moved.

I bolted upright, looking at my infinite reflections. They stared back, looking panicked and wary at once.

The voice was above me. I craned my neck—the ceiling was mirrored too. I saw my reflection in it, but this one, this reflection, was smiling at me. Even though I wasn’t smiling.

So. I’d finally lost it.

“Not yet,” my reflection said, looking amused. “But you’re close.”

“What—what is this?” A hallucination?

“Not a hallucination,” my reflection said. “Guess again.”

I dropped my gaze for a moment, glancing around the room. Every other reflection turned when I did. God, I hoped I was dreaming.

I looked back up at the reflection above me. The girl in the mirror—me, I guess—tilted her head slightly to the left. “Not quite. You’re in that kind-of-unconscious-kind-of-not space. Which should make you feel better about your sanity.”

“Also, you should know that there are sensors monitoring our pulse and heartbeat, so it would be better for both of us if you’d lie back down.”

I swung my head, looking for the monitors, but didn’t see any. I listened to the girl anyway.

“Thanks,” she said. “That Wayne guy comes in and examines us whenever our heart rate spikes, and he really creeps us out.”

I shook my head, the papery pillowcase crinkling with the movement. “Don’t say ‘us.’  That creeps
me
out.”

“Sorry, but it
is
us. I’m you,” my reflection said, arching an eyebrow. “I’m not exactly your biggest fan either, you know.”

I’ve had weird dreams. I’ve had weird hallucinations. But weird didn’t even begin to touch this, whatever this was. “So, what are you? My . . . my subconscious or something?”

“You can’t talk to your subconscious. That’s stupid. It’s more like—I’m the part of you that’s aware even when you don’t know you’re aware. She’s been giving us a lot of drugs—a
lot
of drugs—and it’s dulled our—sorry,
your
—awareness in some ways and heightened it in others.”

The machine beside me beeped loudly as my heart rate spiked. I closed my eyes, and an image of Dr. Kells rose in the blackness, looming above me, so close that I could see tiny
cracks in her thick layers of lipstick. I opened my eyes to make her go away, and saw myself instead.

“How long have I been here?” I asked out loud.

“Thirteen days,” the girl in the mirror answered.

Thirteen days. That was how long I’d been a prisoner in my own body, answering questions I didn’t want to answer and doing things I didn’t want to do. Every thought and memory was fuzzy, as if they were smothered in cotton; me, locked in what looked like a child’s bedroom, drawing picture after picture of what used to be my face. Me, extending my arm obediently while Wayne, Kells’s assistant in therapeutic torture, drew my blood. And me, the first day I woke up here, held captive by drugs and forced to listen to words that would change my life.

“You’ve been a participant in a blind study, Mara.”

“The reason you’ve been selected for this study is because you have a condition.”

“Your condition has caused pain to the people you love.”

“We tried very hard to save all of your friends. . . . We just couldn’t get to Noah Shaw.”

But I did not kill Noah. I could not have killed him.

“Where are they?” I asked my reflection. She seemed confused, then looked at the mirror on my right. Just a normal mirror, I thought, but then the glass went dark.

An image of a girl, or something that had once been a girl, materialized out of the blackness. She was kneeling on carpet, her black hair falling over her bare shoulders as she leaned over something I couldn’t see. Her skin glowed bronze, and shadows flickered over her face. She was blurred and indistinct, as if someone had spilled a glass of water over a painting of her and the colors had started to run. And then the girl lifted her chin and looked directly at me.

“It’s just a game, Mara.” Her voice was scratchy. Distorted. When she opened her mouth again, the only sound that came out was static. Her smile was just a smear of white.

“What’s wrong with her?” I whispered, looking at Rachel’s flickering image in the glass.

“Nothing’s wrong with her. I mean, aside from the fact that she’s dead. But there
is
something wrong with your memory of her. That’s what you’re seeing—your memory.”

“The flickering? I think it’s the candles. The three of us lit them before taking out the Ouija board. Don’t tell me you’ve forgotten that?”

“No, I mean she’s—she’s—distorted.” Rachel’s arms moved in front of her, but her hands were dipped in shadow and I couldn’t see what she was doing. Then she lifted one of them to her nose. Her arm ended at her wrist.

The girl in the mirror shrugged. “I don’t know. Not all of your memories are like this. Look left.”

I did, expecting the new mirror I was staring at to go dark too. It didn’t—not at first. I watched my reflection as the ends of my hair bled from dark brown to red, until it was red to the roots. My face filled out and rounded, and the eyes that stared back at me from the glass were Claire’s.

Claire sat up, and her image split off, separated from mine. She walked out of the white surgical gown I wore, and black threads wove around her pale, freckled body, until she was clothed in the dark jeans and puffy coat she’d been wearing the night we went to the asylum. The bright light in the mirrored room flickered and went out. Roots cracked the concrete floor beneath my bed. They grew into trees that scratched the sky.

Claire looked over her shoulder at me. “Oh my God. She’s freaking out already.”

When Claire spoke, her voice was normal. She wasn’t blurry, and she didn’t flicker or warp. She was whole.

“I don’t know what it means either,” the reflection above me said. “Jude is the same.”

My mouth went dry at the sound of his name. I glanced up and followed her gaze to the mirrored wall to my right; Jude appeared in it. I saw him standing in the center of a manicured Zen garden, with huddled, hunched people arranged around him like rocks. Jamie and Stella were among them. He held
Stella by her shining black hair. I could see the veins in his hands, the pores in his skin. Every feature, every detail of him was clear. Sharp. I felt a flare of rage.

“So what?” I said. “I don’t want to see this.” I never wanted to see him again. But when I looked again, there was a different image of him in the mirror. He was pushed against a bare white wall, a hand gripping his throat. The hand belonged to me.

I looked back up at the ceiling and the girl in it. I didn’t want to remember Horizons, or what had happened to me since. I looked down at my wrists, at my ankles. No restraints. “Just tell me how to get out.”

Microsoft Word - At Last A Life Final Copy 16-03-09 by Maureen
Codex by Lev Grossman
Rebel Kiss: A Historical Romance Novel (Scottish Rebels Book 1) by Stone, Jenna
The Color of Courage by Natalie J. Damschroder
A Wolf's Obsession by Jennifer T. Alli
One Crazy Summer by Rita Williams-Garcia
Decorated to Death by Peg
Pink Ice by Carolina Soto
Song of Solomon by Kendra Norman-Bellamy
The Betrayer by Daniel Judson
Our partner