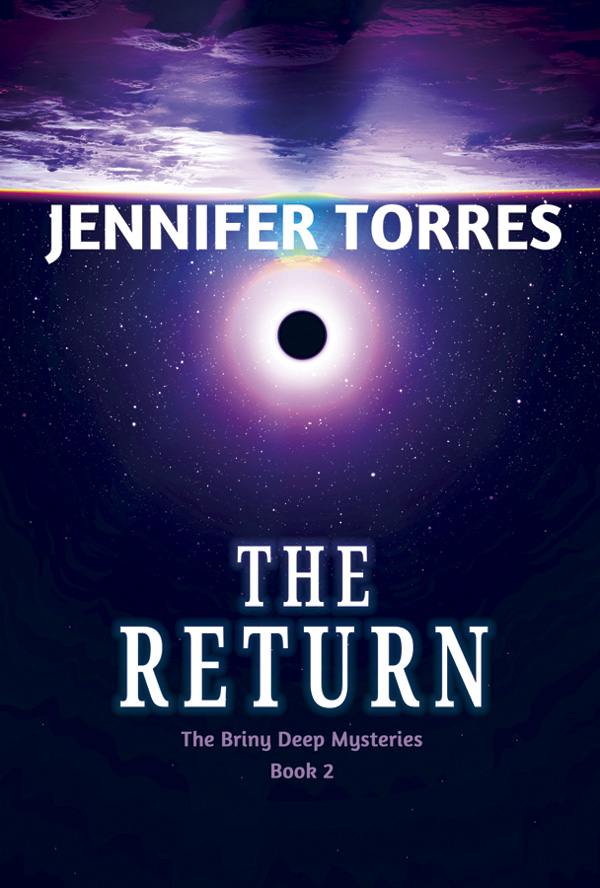 About this Book
Forget What You Know,
Remember What They Made You Forget

Tim's reoccurring nightmare is strikingly vivid. Perhaps it is more than a dreamâpart of a reality that he has been programmed to forget. As Tim and his friends delve deeper into the search for the missing children of Briny Deep, he uncovers secrets so sinister and mysterious that he begins to question the motives of those closest to him. What is the truth about Briny Deep and its connection to a place called Earth? In
The Return: The Briny Deep Mysteries Book 2
, author Jennifer Torres continues to unfold the story of this riveting paranormal mystery trilogy.

Jennifer Torres
lives and writes in a little beach town on the coast of Florida. She loves to write about fantastical lands, secret passageways, and doorways to magical places. A journalist for over fifteen years, she has also written a series of celebrity biographies for children and numerous articles for magazines, newspapers, and non-profit organizations.
The Briny Deep Mysteries
series is her debut into mystery fiction. 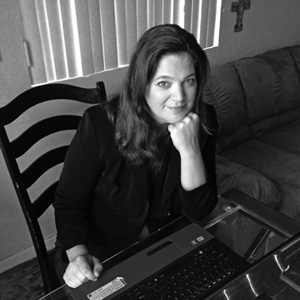 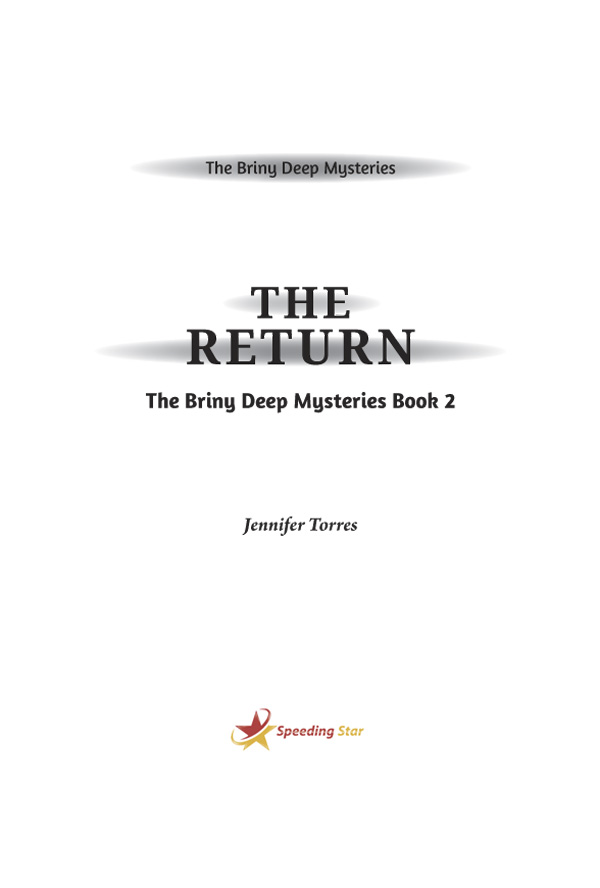 Chapter 1: Back to the Beginning

Chapter 6: What Lies Above

Note
To Our Readers

Read each title in The Briny Deep Mysteries

Chapter 1
Back to the Beginning

It was a normal day.

The sun was big and bright within a blue sky that was filled with puffy white clouds.

Laughter filled the air as children amused themselves outside the small nursery school. A young girl giggled with delight as the ball she threw bopped a little boy right on his head. Another squealed with joy as his tiny plastic car sailed down a long toy ramp.

As the young teacher kept careful watch over her students, she could see the playground alive with activityâevery swing taken and a sandbox full of happy faces.

Ms. Wolpert loved her job at the school. She had gotten it right out of college and considered herself blessed to have a career around children. She loved each and every one of themâand they loved her right back.

“Here, Ms. Wolpert, I made this for you,” said a little girl with big eyes and blonde pigtails.

The teacher took the work of art and carefully studied the picture of a tall woman with dark hair, long eyelashes, and red lips which she could see must be her. Holding her hand was a little girl with golden pigtailsâand the word
love
written in big crayon letters above.

“Oh, Polly, this is a masterpiece,” she cooed as she ran her hand atop Polly's head. “I absolutely love it.”

Polly grinned widely and stood up on her tippy toes to whisper in her teacher's ear.

“You can take it home with you if you want to.”

She knew she wasn't supposed to have favoritesâand she didn't. But she hoped that one day she would have a little girl just like Polly.

With her mission accomplished, Polly ran back to join the other kids.

“Another love note?” said Ms. Horne with a smile. “You have become quite popular in your first year here.”

Ms. Horne, who had been at the school for nearly ten years, was a trusted mentor to the young teacher and also a dear friend.

“I'm going to run inside and try to grade a few papers. Think you can handle things out here on your own?” she asked.

“Of course, you go ahead,” Ms. Wolpert replied.

“Thank you so much, and listen, do me a favor, keep an eye on Matthew. He still seems a bit shy around the other kids, and I worry that he's spending too much time alone.”

“Yes, I noticed that, too. I'll check on him now,” said Ms. Wolpert as her eyes scouted the playground for little Matthew.

Just then, a shadow passed over the school, darkening the yard for a moment. She looked up to see if the beautiful sunny day was about to turn to rain, but there wasn't a cloud in sight.

How strange, she thought. Maybe it was a plane. But it would have to be a large planeâa large, fast plane.

Within minutes she had spotted Matthew. He was under the picnic table by himself.

“Hey, Matt,” she called lightly as she reached for his hand. “Want to play on the swings?”

He eagerly took the pretty teacher's hand and came out from his hiding spot, putting both arms around her in a big hug.

“Oh, sweet little one, why are you all by yourself?” she asked, knowing he probably couldn't tell her as he was barely two years old.

She carried him over to a swing, gently placed him down, and began to push him from behind. Matthew felt safe, and then she began to sing, softly and sweetly, and he felt happy.

“Girls and boys, come out to play,
The moon doth shine as bright as day;
Leave your supper, and leave your sleep,
And come with your playfellows into the street.
Come with a whoop, come with a call,
Come with a good will or not at all.
Up the ladder and down the wall,
A halfpenny roll will serve us all.
You find milk, and I'll find flour,
And we'll have a pudding in half an hour.”

After a while, Ms. Wolpert put him down and led him over to a small group of boys.

“Now you go have fun,” she coaxed.

Recess was almost over, and they had made it through without any rain. Whatever had been in the sky was gone now and nothing but blue skies remained.

She looked at her watch and picked up a whistleâfive more minutes, just enough time for Matthew to get to know those boysâbut as she looked over, she could see he had already retreated back under the picnic table.

The kids raced into three lines when she blew the whistle. It was time to go inside for art.

She quickly scanned the lines of children. Where was Polly?

She looked back at the picnic table where she had just seen him a moment earlier. But he wasn't there. As she surveyed the lines again, she counted at least five children missing.

A slight wave of panic rose from her gut. They had to be hiding. She quickly summoned Mr. Dunkel, the principal, on her walkie-talkie.

He and a few other teachers came outside and together they looked under tables, in trees, behind playground equipment, but the kids were nowhere to be seen.

Ms. Wolpert's eyes widened with fear, and she tried her best to stifle the scream when she realized what had happened.

The kids had vanished.

A small group of children have been distracted by a strange man. Drawn into a secluded corner, out of sight from other adults, the children follow the man out of the schoolyard and into a waiting van.

All but one, a little boy not more than two who decides something doesn't feel right, and he runs. The feeling of dread, of sheer horror, begins to grow. Looking ahead there is a patch of flowers and a yellow house; if he can just get there, he'll be safe.

But a rock hidden in the grass is steps away and he trips, landing on his knees. He looks up; sweat dripping onto his lips, unable to catch his breath.

His breathing is so labored, the thought of formulating a word seems impossibleâbut he tries with all his might and can feel it rising from his gut and rolling out of his mouth in a scream.

Suddenly, a strong hand grips his shoulder, pulling him up from the ground.

The man is very tall and he manages to scoop the small boy up in one big arm while placing a soft, moist cloth gently over his face with the other arm.

The intense fear and panic is giving way to a sleepy sense of well-being.

Both arms are around him now, snug, secureâbut gentle.

As both suns rose in the sky, a cool breeze slipped through the open bedroom window, waking Tim from the nightmare.

It had been two weeks since he had been home from the hospital after his encounter with the yellow-haired man, the one he heard went by the name Canary.

The school year loomed long without his best friend Luke to share it with. There had been no word about any of the missing. They were just gone.

As he lay in bed, he pondered just going back to sleep. At least then he wouldn't have to deal with the loss. But then again, sleep didn't offer much relief because of the reoccurring nightmare. It had gotten worse over the last few nights. More detailed and terrifying.

Nope, sleep wasn't where he would find comfort. The only thing that would give him peace was finding his friends. And he felt sure that meant finding the place called Earth.

They were whispering again.

As Timothy made his way downstairs, he could barely hear his parents' hushed conversation. Pausing, he tried to make out exactly what they were saying.

He knew they were worried, why else would they keep such a close watch on him? He couldn't leave the house without a complete debriefing on who he was seeing, where he was going, and exactly what he was doing.

There had been no more disappearances since Luke. But four kids were gone. Vanished.

There had been no sign of any of them and the stranger, the one they called Canary, hadn't spoken a word to authorities, not one word.

From what Tim had learned, Canary was being held at the Reef Institute, a large facility just outside town. He'd seen it once before when he was younger when he'd ridden his bike a little too far one day and gotten lost. His father had found him about an hour after he left the house. His mother had been so angryâor worried. He wasn't really sure which. But he remembered asking about the building then, and his father had told him it was a place for people who made mistakes.

This had really scared Tim because he made a lot of mistakes. But his dad had reassured him someone had to make a really
big
mistake to end up there.

When Tim was older, he had gone back and seen it again, this time taking his friends. Together they still couldn't figure out how people got inside. He couldn't see any windows or doors. It seemed empty, no cars outside, and no movement. The whole thing was surrounded by a huge fence. The friends had come back another day and saw a man in uniform standing outside the building, but they could not see any door that he could have come through. All he did was stand there for about two hours until Tim and his friends got tired of waiting for something to happen and went home.