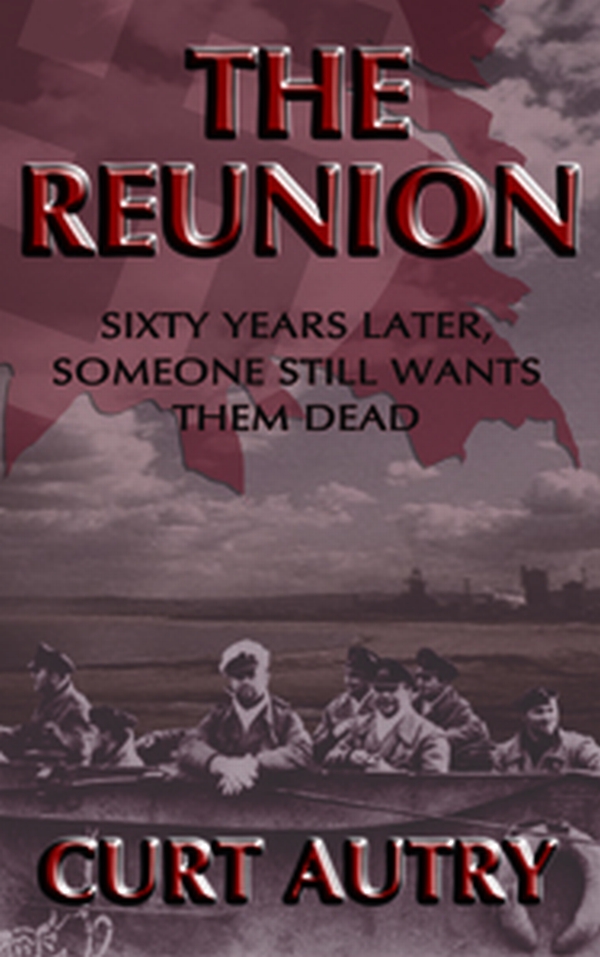 To my grandmother,
whose love and homespun wisdom
can be found throughout this book.

To my editor and publisher, Barbara Peters, thank you for showing me the wayâyour guidance made this novel immeasurably better.

Two books were invaluable resources:
The Codebreakers,
by David Kahn, and
Graveyard of the Atlantic,
by David Stick.

And to my best friend and wife, MichelleâI love you.

This novel is a work of fiction. Names, characters, places and incidents either are the product of the author's imagination or are used fictitiously. Any resemblance to actual persons, living or dead, events, or locales is entirely coincidental.

The Reunion
is a work of fiction scattered with several truths. For a time, Deaconess Hospital in Oklahoma City did operate a home for unwed mothers. There really was a prisoner of war camp in Alva, Oklahoma, during the Second World War. And the crew of U-352 was captured off the coast of North Carolina on May 9th, 1942. Much of the narrative about the sinking is historically accurate. The submarine still sits in about one hundred feet of water at the exact coordinates described in this book, and is a popular spot for sport divers.

The field is the world,

and the good seed stands for the heirs of the kingdom.

The weeds are the heirs of the evil one.

Walter Huber had become a shut-in. The old man hadn't left his house in almost a year. It was a modest, wood-frame house Walter had scrimped to purchase for his new bride. It was the house where he first made love to his wife, where they raised their two boys, where neighbors gathered following Lila's passing, and it was now the place where he would die.

His white hair was sparse on top and close-cropped around his ears, and his skin a waxy pallor reserved for nursing home patients and others who rarely ventured into sunshine. Age spots and crusty patches of melanoma freckled his foreheadâcancers that would never get their chance. Walter always suspected that time or the pistol in the nightstand would claim him first. Men from the old country, like Walter, were not meant to outlive their women and children. His oldest boy, Gunter, had died in a rice paddy in Vietnam, God's will, he told himself at the time. But it was his wife's death two years earlier that left him in a hapless state from which he would never recover. The disease that claimed his beloved Lila was now slowly nibbling on Walter's soul.

When the hospital offered no hope, Lila was sent home to die. He extended the two months the doctors gave her into eight with his constant doting. Unfortunately, his efforts were expensive, depleting nearly all of the funds from what should have been an ample retirement account. But the money didn't matter. Her neediness made Walter feel alive and, unexpectedly, taught him to fall in love with her a second time.

Sometimes, late at night, when the sounds of her strained, raspy breath kept him awake, he'd stare at the bony frame beside him and see the young Lila with dark, restless eyes. He longed for that defiant little girl from Baltimore who married him anyway when her parents swore that nothing good would come from a marriage to a German national so soon after the war. But that apparition rarely lingered, and reality always set in with a sudden forceful shudder, followed by quiet tears. He wept for the warmth of her skin, her laughter and snuggles in the night.

Walter was hard of hearing. The TV blared. “For four thousand dollars, which is a position in football and the name of a popular anti-perspirant?” asked the game show host. “Tight end, left flank, wide receiverâ¦” He didn't wait for the fourth choice to scroll up. “Right guard,” he yelled out to no one as he struggled to keep his eyes focused on the screen.

The game shows usually signaled the peak of Walter's cognitive function for the day, but tonight he didn't make it to the end of the program. The eighty-six-year-old man was dozing long before the contestant moved on to the next round.

Walter wasn't bored by tonight's gameâthis had become his nightly ritual. Barbara, his daughter-in-law, had brought over dinner, a skinless chicken breast served with white rice and smothered in a mushroom soup gravy. It was a meal designed to help keep his cholesterol in check, but one with little appeal. It didn't bother him; the old man couldn't taste much anyway. He ate the food to avoid being scolded as he sat across from the only true companion he really cared about anymore, his twenty-seven-inch Sony.

His routine was quite predictable. He'd doze in his chair and wake when he heard the theme music for the eleven o'clock news on the CBS station in nearby Washington. He would listen to the weatherman give the forecast, start to doze again about the time the sportscaster came on, and then drag himself to bed just as David Letterman started his opening monologue.

The attic of the old house smelled like mothballs and Ben-Gay, a combination that was making Joey sick to his stomach. He intensely hated old people.

He had been crouching under an attic beam for the better part of an hour. Even though he was young and in good shape, his legs were beginning to cramp. As he started to rise, the shrill of a police siren in the distance instinctively dropped him back into a crouch.

After the initial scare, he became angry with himself for acting so stupidly. He knew the police weren't coming for him; after all, there was plenty of crime in this old neighborhood. Arlington, Virginia, wasn't exactly the suburbs anymore. Dope dealers and thieves could cross the bridge from the District of Columbia like anyone else, and often did.

The fat daughter-in-law would return soon. Joey knew the schedule well. With the quiz show playing at a deafening level, any noise emanating from the staircase would go unnoticed. Still, he didn't take any chances. Joey descended the stairs quickly, fearing the porch light and the long, narrow windows on either side of the front door that would allow him to be seen from the street.

The hardwood floors creaked under Joey's weight as he cautiously made his way to the kitchen. He could see the old man's profile through the shutter doors separating the kitchen and the family room. His head was cocked to one side, his mouth gaped open in a loud snore. The old fool probably couldn't even remember what he had for lunch let alone something that happened sixty years ago.

Joey didn't mind the killing, but engaging this old man in conversation was a prospect he dreaded. He pulled the 9mm semi-automatic pistol from the waist of his jeans and began screwing the silencer into the barrel of the gun. This would be the third hit in as many months. He was becoming good at killing. The task that first made him sick to his stomach was now becoming a rush; the adrenaline flow kept his head swimming for hours afterward. There was a bulge in the front of his jeans as he crept along the stairwell. Murder had become a high no woman could provide.

Ironically, the intruder felt some pity for this old man, not because he was about to die, but for the shabby way he lived all alone in this small, dusty house. The furniture was worn and the carpet and curtains long out of date. It was a dismal place where someone obviously came in to pick up but never really cleaned.

As Joey passed through the swinging shutter doors and stepped down into the small family room, he noticed Walter stir, but it was the feel of the cold steel at his temple that brought the old man out of his slumber.

There was just a flash of terror in Walter's eyes. He had no real fear of death. Walter embraced the thought of rejoining Lila and ending his pain. The old man had faced death several times before, but on this occasion he had no gumption to fight. Walter sat silently, almost in a trance-like state, staring at the glow from the television. He carefully listened as Regis recited the sixteen-thousand-dollar question, purposely never acknowledging the intruder.

There was no talk. Joey opened his mouth to bark out the first in a series of questions and suddenly thought better of it. None of the others had anything of consequence to say, and this one wouldn't either. Besides, his superior would never know. He teasingly rolled the barrel of the gun across the old man's forehead.

“Do you believe in the hereafter, old man?”

Walter's hands were folded in his lap. “Yes I do.”

Joey smirked. “Is that your final answer?”

When Walter didn't respond, Joey squeezed the trigger, sending a bullet through Walter's brain and into the La-Z-Boy recliner. His head snapped back sharply from the impact and then slumped forward. Blood showered from both the entry and exit wounds before steadily flowing down his torso to a pool in his lap.

Joey tingled with exhilaration.
Little
Joeyâthe kid his dad always called the runt of the litterâwas a bona fide killer. His next stop at the ATM would reflect the accomplishment with another seventy-five-hundred-dollar deposit, a wire from Fleet National Bank of Providence.

Joey frowned as he looked at his watch. He was behind schedule. His backpack was still in the attic. He'd retrieve it, put on his sweats and running shoes, and leisurely jog the three miles to the shopping center where he'd left the Jeep. Just another junior executive on an evening run, he'd leave the neighborhood unnoticed. With luck, and no major traffic, Joey could still make the North Carolina line by midnight.

A People's Tragedy by Orlando Figes
Alejandro by LaRuse, Renee
The Trellis and the Vine by Tony Payne, Colin Marshall
Billy the Kid & the Vampyres of Vegas (The Secrets of the Immortal Nicholas Flamel #5.5) by Michael Scott
A Recipe for Robbery by Marybeth Kelsey
The Monster of Florence by Magdalen Nabb
Secrets Uncovered by Raven McAllan
Hunted by Denise Grover Swank
Where We Left Off by J. Alex Blane
AS THE SPARKS FLY UPWARD by Gloria Dank
Our partner