Read The Rise and Fall of the British Empire Online

The Rise and Fall of the British Empire 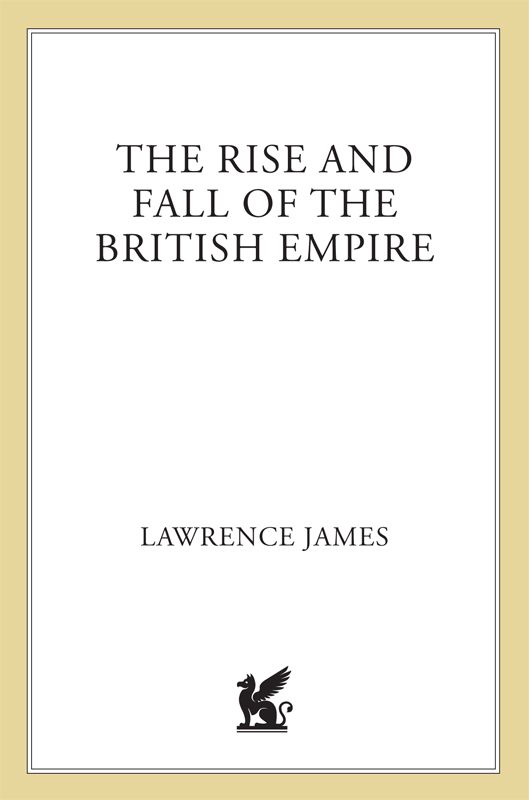 2. Baubles for the Souls of Men: The West and East Indies

3. The Necessary Union of Plantations: Crown and Colonies

4. Dispositions of Providence: The Colonists

5. The World Turned Upside Down: The American War of Independence, 1775–83

7. The Desert of Waters: The Pacific and Australasia

5. They Little Know Our Strength: The Far East and the Pacific

7. That Heroic Soul: The Struggle for the Nile

8. The Greatest Blessing that Africa has Known: East and West Africa

9. Ye Sons of the Southern Cross: The White Dominions

10. Be Brave, Be Bold, Do Right!: The Edwardian Empire and the People

11. To Join the Khaki Line: The Empire and the Coming of War

11. Steadfast Comrades: The Stresses of War

1. The Colonialists are on the Rampage: The Empire in the Post-war World

2. Friendly Relations: India and the Liquidation of Empire, 1945–7

4. Kick Their Backsides: The Suez War and Beyond

5. The Old Red, White and Blue: Reactions to a Dying Empire

To the memory of Vivian and Tim Williams

2
The Caribbean and West Indies in the Eighteenth Century

13
East Africa in the Nineteenth Century

14
West Africa in the Nineteenth Century

I would first like to thank my wife, Mary, for her encouragement, patience and goodwill during the preparation and writing of this book. Thanks are also due to my sons, Edward and Henry, who rendered much valuable assistance. Help, suggestions and valuable advice were also provided by John Adamson, Dr Ian Bradley, Major Euan Campbell, Professor Fred Crawford, John Dishman, Dr Martin Edmonds, David Elder, Dr Nancy Follett, Professor Ray Furness, R.S.M. Joe Mahady, John Hailwood, Michael Halsey, Michael and Veronica Hodges, Mark Hunter, Linda Silverman (who provided most of the illustrations), Andrew Lownie, Dr John Mackenzie, Sheila Mcllwraith, Professor Souleiman Moussa, Professor Alan Paterson, Liz Pert-Davies, Professor Jeffrey Richards, Dr and Mrs Nick Roe, Alan Samson, Alex Sinclair, Dr Martin Stephen, Brian and Kate Waldy, Andrew Williams, the late Vivian Williams, Andrew Wille, and Oswald and Jan Wynd. I am also indebted to Mrs Gascoigne and all the staff at the University of St Andrews Library for services far beyond the call of duty. I would also like to thank the staff at the National Library of Scotland, the Scottish Record Office, the Public Record Office, the Imperial War Museum (in particular the photographic department) and the National Army Museum for their forbearance and help.

Quotations from Crown Copyright records appear by permission of the Controller of Her Majesty’s Stationery Office.

Some time early in the 1980s I undertook a brief tour of what had once been the commercial powerhouse of the British empire. By then, that complex of wharves and solid brick warehouses which stood along the north shore of the Thames was derelict. Nonetheless, the overall effect was impressive, and the cast-iron street signs (Jamaica Street, Ceylon Street) advertised the sources of past prosperity. The abandoned docks of London and Liverpool and Bristol are among the grander monuments to Britain’s moment of empire and world power.

There are others: the shells of Lancashire cotton mills which spun yarns for India; the shipyards of the Clyde and the Tyne which built steamers to carry Britain’s trade and the men-o’-war which protected it; and the country houses of the merchants and nabobs-turned-country-squires who raked in the profits. One of the latter, Sir Charles Cockerell, having made a fortune in India at the end of the eighteenth century, had his mansion, Sezincote, built in a style which combines the novelties of the Prince Regent’s Brighton Pavilion with Indian motifs, including a dome of the sort which would have been set over a mosque. The Cotswold landscape around the house is enhanced with ornamental gardens with an Indian shrine and a bridge decorated with Brahmin bulls. Bringing India to Gloucestershire was a nice reminder that imperialism was a two-way process.

Human memorials of the empire are abundant. David Livingstone, one hand resting on his revolver and the other clasping a Bible, overlooks Prince’s Street, Edinburgh. Walk up towards the castle and one is confronted by embattled, and, thanks to weathering, gaunt stone Highlanders, who form their countrymen’s monument to the Boer War. Churches and cathedrals are draped with dusty, threadbare regimental ensigns embroidered with exotic names such as ‘Chillianwala’ and ‘Tel-el-Kebir’, and the men who died in these and other battles are often commemorated nearby in marble and brass. Pub signs celebrate imperial heroes, and street names conquests and conquerors. In the northern suburbs of Southampton I once saw a Khartoum Road and an Omdurman Road, and in the small West Riding town of Crosshills, a Rhodesia Road. All, to judge by the houses built along them, date from the beginning of the century.

The physical impact of the empire on Britain is easy to see, the mental is less obvious. Readers may detect in my chapters on the empire and the people the origins of codes of behaviour and outlook which still hold some sway, though less so than thirty or forty years ago when the empire was still in existence. I have tried to show that possession of an empire profoundly influenced the ways in which the British thought of themselves and the rest of the world. The British character was changed by the empire, and this is important. It encouraged a sense of superiority, which is also a feature of another former imperial power France, that frequently bordered on downright xenophobia. It also fostered racial arrogance. And yet at the same time, deeply-rooted liberal and evangelical ideals produced a powerful sense of imperial duty and mission. The empire existed to civilise and uplift its subjects, or so its champions claimed.

They had to, for the British were never entirely easy with the idea of territorial empire. From the seventeenth century, and with considerable official encouragement, the British were taught to be proud of their laws, individual freedoms, and elected government. But, many asked, were the rights of the British exclusive, or could they be exported and shared by everyone under Britain’s rule? This question dogged the empire throughout its history and, given that at crucial moments the answer was ‘yes’, proved to be its eventual undoing. In looking at the eighty years, roughly from the mid-1880s to the mid-1960s, when the empire reached its zenith and then declined, I have endeavoured to examine a related issue, how the British saw their empire. During this period, Britain became a democracy and so the empire could not have been sustained without the general approval of the British people. This is vital both in explaining imperial growth and imperial decline.

Ideas alone did not make the empire. Its story is the sum of the lives of the men and women who built and ruled it. Some achieved greatness, making headlines and in time finding themselves heroes whose deeds became schoolroom reading. Their characters, carefully sifted of all baser qualities, became models for future generations. The superheroes of empire were a mixed bag. There were the conventional but brilliant commanders and statesmen such as Pitt, Wolfe, Rodney, Nelson and Wellington who did their duty according to lofty principles, and were respected accordingly. There were also the wayward who, shipped to a foreign land, discovered hidden energies and vision. Clive was the first, and then Gordon, who, like so many empire-builders, imagined himself the agent of a Divine Providence which had singled out Britain as the maker of a better world. Britain’s imperial destiny was also Rhodes’s lodestar, but it was clouded by ambition and ruthlessness. Lastly, for the twentieth century there was Lawrence of Arabia, meretricious but fundamentally decent, adding a dash of lustre to the imperial sunset.

Making an empire and setting one’s personal stamp on it were more glamorous activities than dismantling it. No one emerged from imperial disengagement with the romantic allure of a Clive or a Lawrence. Mountbatten came close, but he was a shallow figure who owed more to his royal attachments (between the death of William IV and the late 1980s the royal family enjoyed unprecedented reverence) than any outstanding talent. Rather, it was Attlee, Macleod and Macmillan who were, I believe, the real heroes of imperial retreat which they supervised with considerable political adroitness. Unlike France’s, Portugal’s or Russia’s, Britain’s empire did not dissolve in tears.

At every stage in this survey, I have looked at the thoughts and actions of many lesser figures. Most important perhaps are the millions who took part in the British diaspora, that process which took colonists to North America, Australasia and South Africa. On this subject, I have been as careful as possible to sidestep the quagmire of post-imperial guilt, that peculiar
angst
which has troubled the British and American intelligentsia for the past thirty or so years. Wherever possible, I have avoided joining in those battles between armies of the night who contend over the rights and wrongs of empires. History cannot be unwritten or written in the subjunctive, and the wholesale application of late twentieth-century values distorts the past and makes it less comprehensible. I have, therefore, left conquerors and colonists to speak for themselves, aware that their authentic voices may sometimes grate on today’s sensibilities.

ANightatTheCavern by Anna Alexander
Quite a Spectacle by Meg Harding
Hanging Time by Leslie Glass
Still Falling: Book 1: Solstice 31 Saga by Martin Wilsey
Essential Poems from the Staying Alive Trilogy by Neil Astley
06 by Last Term at Malory Towers
Valknut: The Binding by Marie Loughin
The Ruining by Collomore, Anna
The Memory of All That by Gibson, Nancy Smith
Murder in the City: Blue Lights by Tatum, Clare
Our partner