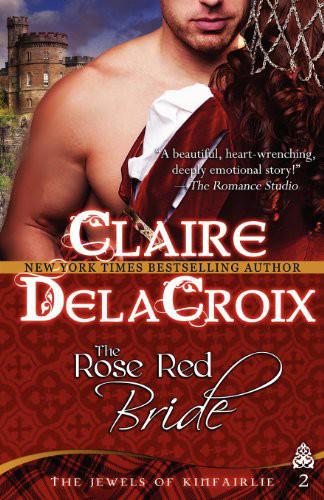 More cherished than gold are the Jewels of Kinfairlie, and only the worthiest may fight for their love...The Laird of Kinfairlie has unmarried sisters, each a gem in her own right. And he has no choice but to see them all wed in haste.

Like a heroine in an ancient tale, Vivienne waited in the highest chamber of Kinfairlie’s tower for her fated lover. In the darkness he came for her, cloaked and hooded so that she would not see his face. He loved her sweetly, thoroughly...and Vivienne knew she had met her destiny.

But in the morning light, her dream is shattered. Erik Sinclair of Blackleith is no romantic hero but a disinherited warrior who arranged her abduction to regain his own legacy. Outraged by Erik’s insistence that he needs her solely to beget a son, yet ensnared by the passion he awakens, Vivienne realizes that there is more merit in her taciturn spouse than he would admit. Erik is skeptical of her growing faith in his honor and her desire to recapture his stolen birthright...

Little does he suspect that his rare gem of a bride intends to capture his barricaded heart as well.

Praise for THE ROSE RED BRIDE

“Claire Delacroix has woven a tale that is a whirlwind of action and betrayal…What a wonderful plot! Throughout this amazing tale, Ms. Delacroix doesn’t let up for a second. There are lighthearted moments and tender love scenes that will delight historical romance lovers everywhere.

“One of the most fascinating continuing stories I have read in quite a while.”

“One of Claire Delacroix’s best stories…Delacroix raises the bar in historical romance writing with the ease of a true professional.”

“Claire Delacroix is a shining star of the romance genre. Cleverly original, emotional and fast-paced, full of twists and turns, her books will sweep you right off your feet!"

“Ms. Delacroix keeps the readers wildly entertained as well as enchanted all the way to the end! This reviewer has always loved Ms. Delacroix’s lush storylines, intricate details and has never been disappointed with her books.
The Rose Red Bride
is one book that will be read over and over again! Five hearts!”

“What better way to begin a story than by providing the reader with a strong, determined hero out to avenge a wrong with a spirited and equally determined woman by his side?
The Rose Red Bride
is blend of passion, humor, fairy lore and everlasting love. A great read!”

The Rose Red Bride
is the second book in my Jewels of Kinfairlie trilogy, in which Alexander faces the challenge of seeing his sisters wed. Madeline was married in book #1,
The Beauty Bride
, and now it’s Vivienne’s turn – the trick is that Vivienne is determined to marry for love. She’s a romantic and a dreamer, our Vivienne, and I always liked how she let her passion drive her choices.

She’s exactly the kind of woman Erik needs, given that he’s been cheated so many times. Vivienne’s faith in him is precisely the balm that heals Erik and makes their Happily Ever After possible. This trilogy continues with the sisters getting even with Alexander in
The Snow White Bride
.

If you’re enjoying this series, too, you’ll be glad to know that there will be another series featuring the other Lammergeier siblings. Look for
The Renegade's Heart
, book one of my new True Love Brides series, coming in spring 2012. You can read more about this book and all of my books on my website.

As with all of my re-releases, I’ve chosen not to revise this book, but to republish it pretty much the way it was published in the first place. There may be a few typos missing in this version, but otherwise it is very similar to the original.

I’ve enjoyed revisiting
The Rose Red Bride
, and hope you enjoy reading it, as well.

Until next time, I hope you are well and have plenty of good books to read.

This re-release has had only minor corrections from the original text. It is essentially the same as the original print edition, although there are minor variations.

The scanning, uploading, printing and distribution of this work without the express written permission of the author is illegal and punishable by law. Please purchase only authorized versions of any work, and do not participate in or encourage piracy of copyrighted materials. Your support of the author’s rights is appreciated.

Excerpt from The Snow White Bride

This trilogy is dedicated to my readers,

with heartfelt thanks for your loyalty and support.

May you enjoy reading about the Jewels of Kinfairlie

as much as I have enjoyed writing their tales.

Kinfairlie, on the east coast of Scotland - August 1421

Alexander congratulated himself upon a matter well concluded. Although the marriage of his eldest sister Madeline had not begun auspiciously, his solution had ultimately proven to be a good one. Just as he had predicted, Madeline was wedded and happily so, all the more content for the babe already rounding her belly. Though Alexander had not located Rhys FitzHenry by any conventional means of matchmaking, the man who had bought Madeline’s hand at auction had proven to be an excellent spouse.

All had ended well, and Alexander was inclined to grant himself credit for that happy fact. A man had to find encouragement where he could. There was little else that stood to Alexander’s credit at Kinfairlie and he often felt overwhelmed by the burden of his hereditary holding.

Alexander stared out the window at Kinfairlie’s fields, frowning that they were not more lushly green. The crop was slightly better than his castellan had predicted, but not sufficiently good enough. Though his sister Madeline was wedded, his brother Malcolm was training at Ravensmuir and his other brother Ross was training at Inverfyre, there remained four unwed sisters for whom Alexander was responsible. The castellan had been firm in his counsel that there must be fewer mouths at the board for the winter.

The fields offered a telling reminder. Alexander would still have to see his sister Vivienne, the next eldest after Madeline, married before the snow flew.

Sadly, Vivienne was not proving to be any easier to wed than her elder sister Madeline had been. Vivienne was willing to wed, but she wished to feel affection for her spouse before her nuptials were celebrated. Indeed, she wished to be in love. Alexander was certain they had visited every man in Christendom to no avail. He might well roar if Vivienne met his gaze and gave that minute shake of her head one more time.

Though Alexander would prefer for Vivienne to be happy, August was already upon them. Soon he would be compelled to take matters into his own hands.

Alexander sighed and buried himself in the accounts of the estate, hoping to discover that matters were slightly better than he knew them to be. He did not have sufficient time to become bored with the tedium of checking tallies before a rap sounded upon the wooden portal.

Anthony, Kinfairlie’s elderly castellan, cleared his throat when Alexander did not immediately respond. “A gentleman to see you, my lord. He begs an audience in privacy at your earliest convenience.”

Alexander was intrigued, for guests seldom arrived unbidden at Kinfairlie and even less frequently insisted upon privacy. “Has he a name?”

“Nicholas Sinclair, my lord.” Anthony sniffed as Alexander started in surprise at the familiar name. “I am dubious of his character, my lord. No man of merit whispers his name and hides his face within the shadows of his hood.”

Alexander sat back in astonishment. “But Nicholas Sinclair was the very man who courted Vivienne some years ago!”

Anthony straightened in disapproval. “I believe as much, sir, though the Sinclair men are rogues indistinguishable each from the other. They are said to be of Viking lineage, my lord, which gives them little credit.” He apparently noted Alexander’s interest in this new arrival and cleared his throat again. “Although I admit that is solely my own opinion, sir. There are those, often women, I have heard, who find a certain allure in Sinclair men.”

What had gone awry between Nicholas and Vivienne? Alexander could not recall. Indeed, he might never have known. He had not paid much attention to Vivienne’s loss of a suitor, for in those days, such matters had not been his concern.

“I should be delighted to see Nicholas Sinclair,” he said, noting that Anthony was taken aback by his vigor. Alexander smiled, for he had come to enjoy surprising his very proper castellan. “Bring him to me with all haste, if you please, and some ale as well.”

“Ale, sir?” Anthony’s silver brows rose high. “Are you certain it is wise to make a Sinclair so welcome?”

“Ale, Anthony, to be sure.” Alexander spoke with the firmness he had learned to use with his opinionated castellan. “A guest is a guest, no matter his name.”

Anthony cast a glance over the accounts, spread over the table before his liege lord, and his lips pinched yet more tightly. “I would suggest that your affairs not be so displayed, my lord. The Sinclairs have a reputation for coveting what is not their own.”

“I have had my fill of the accounts at any rate,” Alexander said, then began to put the books away as the castellan left. He rolled scrolls tightly and refastened their ribbons, storing all carefully in a trunk.

The table before him was bare when a tall, cloaked man entered the chamber. The man limped, favoring his left leg, but strode with vigor all the same. As Anthony had noted, the man kept his hood raised, and his face was in shadow.

The man nodded curtly. “Good day to you. I thank you for this courtesy.” Nicholas offered his hand and Alexander shook it. It was a large hand, tanned and roughened, the hand of man well familiar with the weight of a blade. Nicholas’ grip was no less sure than Alexander might have expected. His manner was purposeful and confident, and Alexander could not help but think that a man resolutely of this world might be a good partner for his sister who loved whimsical tales.

Alexander made to take his seat once more and gestured to the bench opposite. “I confess to a certain curiosity about your arrival here.”