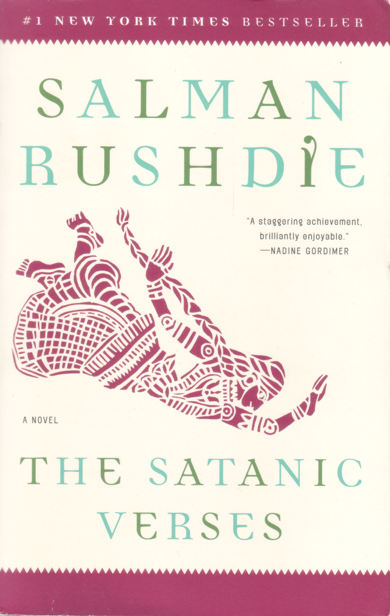 All rights
reserved under International and Pan American Copyright Conventions. Published
in Canada by Vintage Canada, a division of Random House Canada Limited, Toronto,
and simultaneously in the United States by Owl Books, a division of Henry Holt
and Company, in 1997. Originally published in hardcover by Viking Penguin Inc.
in 1988. Distributed by Random House of Canada Limited, Toronto.

Satan, being thus confined to a vagabond, wandering, unsettled condition, is
without any certain abode; for though he has, in consequence of his angelic
nature, a kind of empire in the liquid waste or air, yet this is certainly part
of his punishment, that he is . . . without any fixed place, or space, allowed
him to rest the sole of his foot upon.

Daniel Defoe,
The History of the Devil 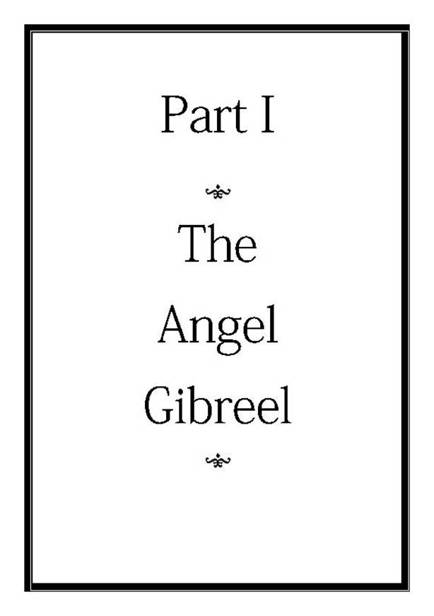 "To be born again," sang Gibreel Farishta tumbling from the heavens,
"first you have to die. Hoji! Hoji! To land upon the bosomy earth, first
one needs to fly. Tat-taa! Taka-thun! How to ever smile again, if first you
won't cry? How to win the darling's love, mister, without a sigh? Baba, if you
want to get born again . . ." Just before dawn one winter's morning, New
Year's Day or thereabouts, two real, full-grown, living men fell from a great
height, twenty-nine thousand and two feet, towards the English Channel, without
benefit of parachutes or wings, out of a clear sky.

"I tell you, you must die, I tell you, I tell you," and thusly and so
beneath a moon of alabaster until a loud cry crossed the night, "To the
devil with your tunes," the words hanging crystalline in the iced white
night, "in the movies you only mimed to playback singers, so spare me
these infernal noises now."

Gibreel, the tuneless soloist, had been cavorting in moonlight as he sang his
impromptu gazal, swimming in air, butterfly-stroke, breast-stroke, bunching
himself into a ball, spreadeagling himself against the almost-infinity of the
almost-dawn, adopting heraldic postures, rampant, couchant, pitting levity
against gravity. Now he rolled happily towards the sardonic voice. "Ohe,
Salad baba, it's you, too good. What-ho, old Chumch." At which the other,
a fastidious shadow falling headfirst in a grey suit with all the jacket
buttons done up, arms by his sides, taking for granted the improbability of the
bowler hat on his head, pulled a nickname-hater's face. "Hey,
Spoono," Gibreel yelled, eliciting a second inverted wince, "Proper
London, bhai! Here we come! Those bastards down there won't know what hit them.
Meteor or lightning or vengeance of God. Out of thin air, baby.
Dharrraaammm!

Wham, na? What an entrance, yaar. I swear: splat."

Out of thin air: a big bang, followed by falling stars. A universal beginning,
a miniature echo of the birth of time . . . the jumbo jet
Bostan
,
Flight AI-420, blew apart without any warning, high above the great, rotting,
beautiful, snow-white, illuminated city, Mahagonny, Babylon, Alphaville. But
Gibreel has already named it, I mustn't interfere: Proper London, capital of
Vilayet, winked blinked nodded in the night. While at Himalayan height a brief
and premature sun burst into the powdery January air, a blip vanished from
radar screens, and the thin air was full of bodies, descending from the Everest
of the catastrophe to the milky paleness of the sea.

Who else is there?

The aircraft cracked in half, a seed-pod giving up its spores, an egg yielding
its mystery. Two actors, prancing Gibreel and buttony, pursed Mr. Saladin
Chamcha, fell like titbits of tobacco from a broken old cigar. Above, behind,
below them in the void there hung reclining seats, stereophonic headsets,
drinks trolleys, motion discomfort receptacles, disembarkation cards, duty-free
video games, braided caps, paper cups, blankets, oxygen masks. Also―for
there had been more than a few migrants aboard, yes, quite a quantity of wives
who had been grilled by reasonable, doing-their-job officials about the length
of and distinguishing moles upon their husbands' genitalia, a sufficiency of
children upon whose legitimacy the British Government had cast its ever
reasonable doubts―mingling with the remnants of the plane, equally
fragmented, equally absurd, there floated the debris of the soul, broken
memories, sloughed-off selves, severed mother tongues, violated privacies,
untranslatable jokes, extinguished futures, lost loves, the forgotten meaning
of hollow, booming words,
land, belonging, home
.  Knocked a little
silly by the blast, Gibreel and Saladin plummeted like bundles dropped by some
carelessly open-beaked stork, and because Chamcha was going down head first, in
the recommended position for babies entering the birth canal, he commenced to
feel a low irritation at the other's refusal to fall in plain fashion. Saladin
nosedived while Farishta embraced air, hugging it with his arms and legs, a
flailing, overwrought actor without techniques of restraint. Below,
cloud-covered, awaiting their entrance, the slow congealed currents of the
English Sleeve, the appointed zone of their watery reincarnation.

"O, my shoes are Japanese," Gibreel sang, translating the old song
into English in semi-conscious deference to the uprushing host-nation,
"These trousers English, if you please. On my head, red Russian hat; my
heart's Indian for all that." The clouds were bubbling up towards them,
and perhaps it was on account of that great mystification of cumulus and
cumulo-nimbus, the mighty rolling thunderheads standing like hammers in the
dawn, or perhaps it was the singing (the one busy performing, the other booing
the performance), or their blast-delirium that spared them full foreknowledge
of the imminent . . . but for whatever reason, the two men, Gibreelsaladin
Farishtachamcha, condemned to this endless but also ending angelicdevilish
fall, did not become aware of the moment at which the processes of their
transmutation began.

Yessir, but not random. Up there in air-space, in that soft, imperceptible
field which had been made possible by the century and which, thereafter, made
the century possible, becoming one of its defining locations, the place of
movement and of war, the planet-shrinker and power-vacuum, most insecure and
transitory of zones, illusory, discontinuous, metamorphic,―because when
you throw everything up in the air anything becomes possible―wayupthere,
at any rate, changes took place in delirious actors that would have gladdened
the heart of old Mr. Lamarck: under extreme environmental pressure,
characteristics were acquired.

What characteristics which? Slow down; you think Creation happens in a rush? So
then, neither does revelation . . . take a look at the pair of them. Notice
anything unusual? Just two brown men, falling hard, nothing so new about that,
you may think; climbed too high, got above themselves, flew too close to the
sun, is that it?

That's not it. Listen:

Mr. Saladin Chamcha, appalled by the noises emanating from Gibreel Farishta's
mouth, fought back with verses of his own. What Farishta heard wafting across
the improbable night sky was an old song, too, lyrics by Mr. James Thomson,
seventeen-hundred to seventeen-forty-eight. ". . . at Heaven's
command," Chamcha carolled through lips turned jingoistically redwhiteblue
by the cold, "arooooose from out the aaaazure main." Farishta,
horrified, sang louder and louder of Japanese shoes, Russian hats, inviolately
subcontinental hearts, but could not still Saladin's wild recital: "And
guardian aaaaangels sung the strain."

Let's face it: it was impossible for them to have heard one another, much less
conversed and also competed thus in song. Accelerating towards the planet,
atmosphere roaring around them, how could they? But let's face this, too: they
did.

Downdown they hurtled, and the winter cold frosting their eyelashes and
threatening to freeze their hearts was on the point of waking them from their
delirious daydream, they were about to become aware of the miracle of the
singing, the rain of limbs and babies of which they were a part, and the terror
of the destiny rushing at them from below, when they hit, were drenched and
instantly iced by, the degree-zero boiling of the clouds.

They were in what appeared to be a long, vertical tunnel. Chamcha, prim, rigid,
and still upside-down, saw Gibreel Farishta in his purple bush-shirt come
swimming towards him across that cloud-walled funnel, and would have shouted,
"Keep away, get away from me," except that something prevented him,
the beginning of a little fluttery screamy thing in his intestines, so instead
of uttering words of rejection he opened his arms and Farishta swam into them
until they were embracing head-to-tail, and the force of their collision sent
them tumbling end over end, performing their geminate cartwheels all the way
down and along the hole that went to Wonderland; while pushing their way out of
the white came a succession of cloudforms, ceaselessly metamorphosing, gods
into bulls, women into spiders, men into wolves. Hybrid cloud-creatures pressed
in upon them, gigantic flowers with human breasts dangling from fleshy stalks,
winged cats, centaurs, and Chamcha in his semi-consciousness was seized by the
notion that he, too, had acquired the quality of cloudiness, becoming
metamorphic, hybrid, as if he were growing into the person whose head nestled
now between his legs and whose legs were wrapped around his long, patrician neck.