The Scent of Corruption (The Fighting Sail Series Book 7) 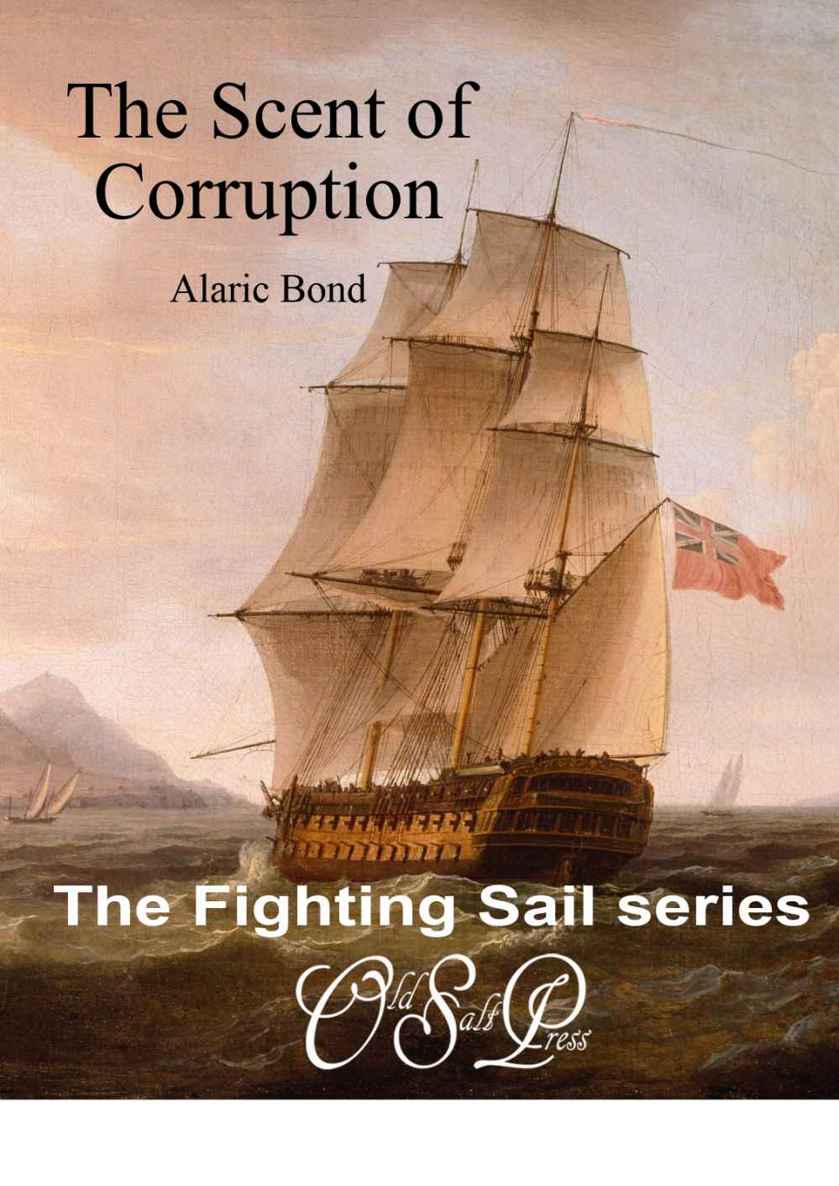 The Scent of Corruption

The Scent of Corruption

The Scent of Corruption (The Fighting Sail Series, #7)

The Guinea Boat | (sample) | Chapter One

Publisher's Note: This is a work of historical fiction. Certain characters and their actions may have been inspired by historical individuals and events. The characters in the novel represent the work of the author's imagination, however, and and resemblance to actual persons living or dead is entirely coincidental.

All rights reserved. No part of this book may be reproduced or transmitted in any form or by any means, electronic or mechanical, including photocopying, recording, or by any information storage or retrieval system, except for the inclusion of brief quotations in a review, without the author's written permission.

The cover shows a detail from

T
he last thing Lieutenant King wanted was to be interrupted. His day had already been long and taxing enough, and there were no further duties scheduled until dawn. He would rather forget all about HMS
Prometheus
, along with any responsibility he may have as one of her officers. Nevertheless his visitor probably deserved a second glance, even if there was nothing ostensibly unusual about him.

He was dressed as a seaman but not smartly so, and certainly not in an off duty Jack's more usual shore-going rig. Instead of a tape seamed, bright buttoned jacket he wore a plain round affair, along with the more common shipboard attire of chequered shirt, and baggy canvas trousers. The latter appearing to have been sewn aboard ship and owed more to practicality than style. His hair was cut short, in the modern manner, with no queue, and beneath was a face tanned to the degree only many years at sea can achieve. He was also carrying the ubiquitous tarred hat that might be found in any lower deck man's possession.

Lieutenant King considered him through a slight haze that had more to do with the gin he had already drunk than the parlour's smoke-filled atmosphere. His visitor could be here on duty – a hand sent from another ship, or even one from the past but, despite his mildly inebriated state, King was reasonably sure he had never laid eyes on the fellow before. He told himself he would have remembered and, now that he looked more carefully, wondered if there was actually something different about the man. Something that said, however conventional the appearance, this was no normal lower deck hand: even his opening question had proved that.

“What manner of position are you seeking?” King replied at last, taking care to enunciate his words clearly above the babble of the busy room, while willing his brain to clear.

“I'd be happy to ship as a regular hand, sir,” the seaman told him.

King considered the stranger's clear and annoyingly sober eyes. There had been no trace of a waver, and it was unusual for a regular hand to meet an officer's gaze quite so directly. Yet the seaman, who appeared slightly older than himself, was not giving any impression of impertinence; quite the reverse, in fact.

“Do you have experience?” King asked. It was like looking a gift horse in the mouth: despite a period of active recruitment,
Prometheus
remained desperately undermanned and any addition to her crew, be they able, ordinary or landsman, would be welcomed. But the visitor's demeanour intrigued him and he wanted to know more.

It was partly the way he stood, in all respects a seaman, with head respectfully bared, yet there was no sign of an earring. His voice was also unusually well rounded, almost genteel. And he had sought King out in the parlour of a hotel: The
Earl of Essex
was little more than a pretentious boarding house admittedly, but still considerably above the standard most lower deck men would feel comfortable entering. That much at least was decidedly curious but, strangest of all, he wanted to serve aboard
Prometheus
.

There was nothing wrong with the ship, King hurriedly assured himself; a seventy-four gun line-of-battleship fresh from refit and about to join the Channel Fleet – worse postings existed undoubtedly. But then neither was she a frigate set for a cruise, when excitement and prize money might be expected. And if he had wanted to volunteer to serve his Majesty, why had the man not applied to one of the several Rondys nearby? There he would have been greeted far more warmly, and could have taken his pick of the bounties, both official and otherwise, that were bound to be on offer.

“I've served in the past, sir,” the visitor assured him: King's silence had obviously caused concern and his glance fell away for the first time. “In
Hector
, and
Suffolk
, then I was in
Adamant
and saw action at Camperdown. After that there was a spell ashore, followed by two years in
Wakeful
.”

“I was at Camperdown,” King remarked and, despite the words being slightly slurred, he spoke them with pride, in the way that most who had served with Duncan would. But, if this was a veteran, he seemed almost ashamed of the honour, and King was becoming more intrigued by the second.

“I don't mind being rated landsman, sir,” he added, as if frightened King might lose interest. “Not if you already have a full complement, though I can hand, reef and steer with the best of them.”

King glanced down at his current drink. It was one in what was surely destined to become a series, and had remained ignored for longer than any so far that evening. But suddenly the hotel's rightly acclaimed Hollands held little attraction for him, and he wished himself sober.

“We might take an extra landsman,” the lieutenant conceded, loftily. “Though, if truly skilled, would prefer an ordinary or able hand, and should gladly rate you so.”

The man's expression relaxed, although it was to one of relief rather than pleasure. “But, forgive me,” King continued. “You do not come across as a regular foremast Jack.”

Again the man's glance fell away and he even looked mildly ashamed.

“What is your name?” King persisted.

“Ross, sir,” the seaman replied smartly enough. “And I can hold my own as able, if you put me to test.”

The lieutenant scratched at his head; to return to the ship with a willing hand in tow would do his personal standing no harm at all, especially in a place like Tor Bay, where such things were almost unheard of. And he was sadly aware his status aboard
Prometheus
had been slipping consistently of late. The new ship, larger than any King had previously known, excited him, and it was good to be walking a deck again after so long ashore. But he was finding it hard returning to life as a sea officer, and his time on the beach had encouraged a lot of bad habits, one of which he was indulging in that very evening.

“How long have you served as an able seaman, Ross?” he asked, and noted the man's immediate swallow.

“I have yet to, sir, but am familiar with the duties.”

“As an ordinary hand then?”

Ross shook his head. “I've no objection to being rated landsman, sir.” he muttered.

“What was your last position?”

“In
Wakeful
, sir?” It was very nearly prevarication, and King nodded impatiently while the seaman drew breath.

“I was her first lieutenant,” he replied at last.

O
f all the places in
Prometheus,
the forepeak was one of the more remote; a fact that had been very much on Thompson's mind in his selection. And security remained a major concern as he slipped down the companionway before stepping quietly along the orlop. It was late enough for the idlers to be off duty, so he had to be especially careful. In one hand he clutched a canvas pouch, while the other held a small bottle filled with water. He could have found himself a lantern, but a moving light would have attracted attention, and attention was something Thompson wished to avoid.

He walked slowly and carefully past the powder room and forward magazine, using the occasional lanthorns that lit the ship's low-beamed underworld as a guide, then paused at the top of the ladder that led down into what he was starting to regard as his own private space. There was no sight or sound of movement beneath, and the only scent was that of stale bilges, damp wood and rats: it was perfect. He dropped easily down the well worn rungs until his bare feet touched a deck that had not seen sunshine since
Prometheus
was built. Turning to larboard, he found the small glim and firesteel he had left behind. With two strikes a feeble yellow flame appeared, which he quickly transferred to the lantern, and an eerie glow was cast on Thompson's surroundings.

About him lay all manner of broken fittings and discarded iron work: items that did not deserve a defined home elsewhere, or were of limited value. To anyone accustomed to Royal Navy order, the place looked decidedly disorganised, but it suited Thompson's purposes perfectly. He waited until, drawn by either light or noise, a young woman appeared from the depths. The amber rays caught her face, and Thompson smiled. Flickering shadows danced upon her and he was struck, once more, by a rare and natural beauty.

Yes, she was certainly a prime catch, he decided. The hair, which hung long and unkempt, might have looked better properly dressed and arranged, but draping over her shoulders as it did was enough for a simple man. And the long smock Thompson himself had provided was surely as attractive as any fine dress or ball gown, especially as the occasional tear gave tantalising glimpses of the body within.

“What cheer, little one?” he asked gently, rising up and extending a hand in her direction. She took it with caution, allowing herself to be guided towards him as if invited to dance. He led her to the centre of the space and seated himself on a stack of old wardroom panelling, presumably left over from the refit, while she rested awkwardly against a coil of worn, ten-inch hawser that had yet to be turned into oakum.

The girl reached forward to take the bag but Thompson held it up and out of her grasp, his yellowed teeth shining in the poor light. “Ain't you forgettin' yourself?” he asked. “A man likes to be thanked, don't you know?”

She glanced down and gave a sigh of resignation before turning her attention back to the seaman. Bending forward, she kissed him, firm and long, upon the lips and, if she minded the hand that felt its way beneath her shift, there was no indication.

When he had finished, both bag and bottle were passed across and she fell upon the food. Thompson watched while she ate, grinning with pride and occasionally nodding in encouragement.