Read The Scratch on the Ming Vase Online

The Scratch on the Ming Vase 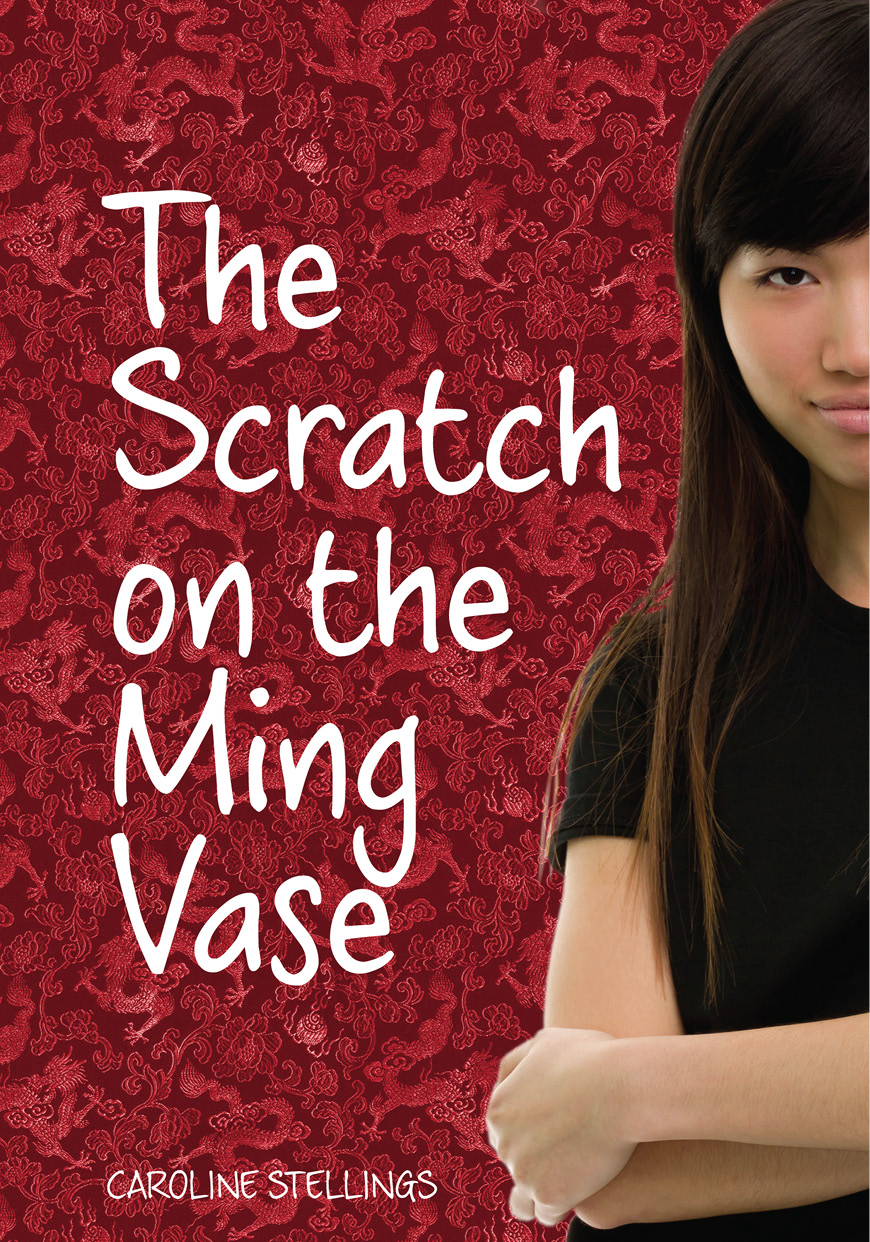 The Scratch on the Ming Vase

The scratch on the Ming vase [electronic resource] / by Caroline

First published in the USA in 2013

On a balmy night in the middle of August, an assassin skims through the darkened streets of Chinatown. The claptrap restaurants and laundries are sprawled over a dozen blocks, a maze of crazy alleys with no beginning and no end. His cotton shirt is threadbare, and he's sweaty from the thick heat that even the strongest Kona trade wind can't blow out of town. The shops on Maunakea Street are long-since closed for the night, but the oily cooking smells linger, mixing with salty Pacific air and the pungent smoke from opium dens.

He looks up to the one window where a sliver of light sneaks out from behind a blind and rests on the fringe of a coconut palm. He feels his front pocket for a pack of cigarettes and his back one for a six-inch knife. It isn't long before his contact arrives and they lock eyes.

Their whispered conversation, in a Cantonese dialect, lasts only a few seconds. There's a yellow ring around the perigee moon, and it breaks their stare.

The assassin is told to get it right the first time.

He grabs a cardboard box out of his contact's arms, opens the flaps, and peers inside. A faint smile flickers at the corners of his mouth. The Ming vase in there is worth more greenbacks then he could hope to make in ten lifetimes. And it isn't his life that's about to end. It's Sun Yat-sen's.

The Manchu regime has a price on Sun's head that's too high for any man to resist. Someone has to stop the reformer from changing four thousand years of rule in China. Someone's got to shut him up.

The contact waits behind a palm tree while the killer climbs the wooden stairs. They creak, so he stops for a minute, then takes two at a time. He presses his ear against the wall to hear Sun Yat-sen rallying his recruits. Then he smiles again and kicks open the door.

The knife hits Sun's collarbone, and he survives to tell the tale.

The assassin does time for attempted murder.

The vase winds up in a vault at the police station on Bethel Street.

Rain drenched the streets of Toronto's Chinatown. Streaming off roofs and through gutters, then gushing into the sewers, it carried with it the dust of one of the hottest summers on record. The fruit stands and fish markets and herb shops stayed open for business under canopies, their owners oblivious to both the heat and the rain.

Nicki arrived in Toronto in the evening; she caught a bus from the airport, then a subway to Chinatown. She was used to the city in July and the kind of humidity that sticks to you like a second skin. In some ways, she preferred it to Honolulu. No turquoise ocean lapped at her door, and no plumeria-scented breeze wafted by, but whenever she landed in Toronto, it felt like home.

The sixteen-year-old pulled a rumpled paper from her duffel bag and checked the address she'd scrawled down while still in the Pineapple State. She was close now, closer than ever to her dream of working with David Kahana. A native Hawaiian, and one of the most highly respected martial artists in the world, he had come to Toronto for the summer to train elite athletes.

Nicki ran the last block, stopping once to shake off the rain and ask for directions to the Fire Dragon Academy.

An old Chinese woman pointed across the street, and Nicki spotted it. It was modest: a couple of rooms on the second floor over a tavern full of drunks, but it looked like heaven to her. She gazed up at it and smiled, glad to see that the lights were still on.

Good
, she thought.
We can work out a schedule right away
.

She climbed a narrow staircase that had spent the last two decades as a canvas for street artists. At the top, where the concrete ended and a dirty carpet began, a smudge caught her eyeâblood red and in the shape of a shoe.

Looks like paint
, she told herself. She knew it wasn't. And it wasn't graffiti redâtoo dark for that.

Blood. It was blood. Fresh blood. And someone had tracked it out of the Fire Dragon Academy.

Maybe it's from a nosebleed.
She'd had a few of those herself, when the sparring got too vigorous.
Or maybe the students have been working with swords.

The door swung open when she touched it.

When she passed the threshold, a nail sticking out of the woodwork snagged her pant leg. She pulled herself loose, then stepped inside.

The only replies came from a car horn at street level and a guy yelling at his girlfriend in the bar.

A desk in the middle of the room was covered with files, empty coffee cups, business cards, martial arts magazines, and manuals. Nicki followed the footprints past the desk; they came from the training room. Halfway in, a trail of red accompanied the footprints to the door of a storage area.

Inside lay David Kahana, face down in a pool of blood.

“Theâ¦Mingâ¦” Kahana was trying to tell her something.

Nicki's cell phone was still in her hand, and the 911 operator was slamming her with questions when the rescue team arrived.

Minutes. It took only minutes
.
There was nothing she could do with a wound like that, and she knew it.
Thank goodness they got here so fast.

They took Kahana out in a stretcher. He wasn't dead. Not yet, anyway. The paramedics wouldn't be working so hard if he were.

Nicki's heart pounded. She sank onto a bench in the hallway. Inches from her foot, not far from the door to the academy and spattered with blood, lay a small filing card.

She examined it carefully; it had yellowed with time, and what was once black ink had faded to dull gray. It read:

Property of the Honolulu Police Department, 842 Bethel Street. Seized August 15, 1901, during attempted murder of Sun Yat-Sen. File No. 15738B

That's the old station downtown in the historic district
, she thought.

She slipped the card into her bag as a female officer strode through the door.

“Miss,” said the officer, “I'll take you to the hospital.”

“Let's have a physician confirm that.” The officer took Nicki to the hospital in a cruiser, left her in the emergency room, and told her she'd be back to ask some questions. “Stick around,” was how she put it.

A young hospital volunteer slid into the seat next to Nicki and handed her a coffee. Her name tag read
Margo Bloom
.

“I thought you could use this,” she said. She was about the same age as Nicki, with an open and happy face and curly, brown hair. She wore a pink uniform with matching running shoes and a pink-and-white striped vest.

Horrible color,
thought Nicki. “Do they know anything at all about Mr. Kahana's condition?” she asked. She couldn't stop her hand from shaking, and half the coffee hit the floor.

The volunteer mopped it up with a wad of tissues.

“All I know is that they took him to intensive care. And even if I knew, I wouldn't be allowed to tell you anything. I'm just a volunteer.” She extended her hand. “I'm Margo Bloom, by the way. ”

“There's nothing you can tell me?”

Nicki pulled out her wallet. “What do I owe you for the coffee?”

“Oh, that's okay. Don't worry about it.” She removed the lid from her own cup. “I hope you like cream and sugar.” Margo covered a yawn with the lid.

“I do,” said Nicki, although she never touched the stuff.

The girl yawned again. “Sorry. I've been trying to fit in my hours here at night.”

Margo nodded. “And work. I plan on going to nursing school next yearâif I can stay awake long enough to pass calculus. Plus, I'm dieting. I want to look good in my new disco dress. Well, it will be mine if it goes on sale.”

“There's a retro night at the club where my friends and I go,” said the girl. “The university students hang out there, but you can get in if you're sixteen.” She smiled. “Oh, you should see this dress. The clerk told me the store owner is reducing a lot of items next week, so I'm keeping my fingers crossed.”

“Here, I want to pay for the coffee,” said Nicki, handing her a five-dollar bill.

“No, it's okay.” Margo tossed back her java like she'd found ice water after a week in the Sahara. “My parents have a deli around the corner. Business isn't what it used to be, but I still manage to smile my way to the odd tip.”

Margo glanced at Nicki's shoes and sweats. They were splattered with mud. One pant leg was torn where the nail had caught it. “Do you have a place to stay tonight?” she asked.

“Oh, you don't have to explain anything. I understand how it is. Times are tough for everybody.” She patted Nicki's wrist.

“Margo, we need some help in the geriatric ward.”

Margo stood up. “Nice to meet you,” she said. “I hope your friend gets better.” She headed for the elevator.

Nicki dumped the coffee down the drain of a water fountain, then made her way to the intensive care unit.

She combed the halls until she found David Kahanaâbarely alive and being wheeled into surgery.

“You'll have to get out of the way.” A blood-soaked nurse shouldered Nicki to the side.

The door to the operating room slammed shut.

The Last Summer of the Camperdowns by Kelly, Elizabeth
Wolf on the Hunt by N. J. Walters
Come Home Again (The Donovans) by Nana Malone
Blood Brothers (Rocky Mountain Shifters) by Arden, Susan
The Choir Boats by Rabuzzi, Daniel
FireWolf by Anh Leod
Mrs. Grant and Madame Jule by Jennifer Chiaverini
Loving Vin (Barretti Security Series, #1) by Sloane Kennedy
From the Ocean from teh Stars by Arthur C Clarke
The Dark Art of Persuasion by Ashe Barker
Our partner