Read The Secret of Spring Online

The Secret of Spring 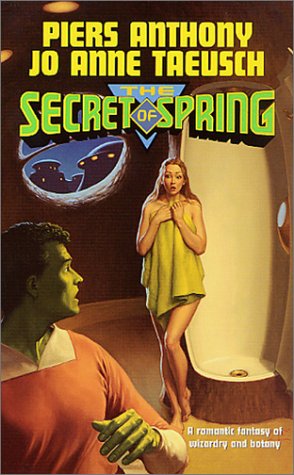 The Secret of
Spring

A Tom Doherty Associates Book New York This is a work of fiction. All the characters and events portrayed in this novel are either fictitious or are used fictitiously.

THE SECRET OF SPRING

Copyright © 2000 by Piers Anthony Jacob and Jo Anne
Taeusch
All rights reserved, including the right to reproduce this book, or portions thereof, in any form.

is
a registered trademark of Tom Doherty Associates, LLC.

This book is dedicated to the memory of my Mother, who loved life, laughter, and me.

Ant We Got Fun

The Secret of
Spring

Wiping the perspiration from his brow, Herb Moss looked with admiration at Holly, the beautiful, fresh green
Veganette
resting next to him. She was a busty blossom, with luscious strawberry lips and long, thick emerald hair that fell enticingly to her hips. It had been tied up out of the way for greater freedom of movement, but the ribbons had worked loose with exertion. Now she was busy knotting a tighter bow. Finishing up the small task, she whirled around to grace Herb with a winning smile. His heart pounded faster at the flash of even white teeth.

Infertile pollination? Was that all life meant to him? And yet, why else had he travelled to this remote and expensive resort? It had seemed like a good idea at the time, but like so many of his spontaneous decisions, it had resulted in much less than he had anticipated. Herb knew he wasn't above a little discreet
Ip
, given the improper circumstances. And Holly was more than another attractive girl, she was quite a woman.

Her soft voice brought him back to reality. "Let's do it again!" she said breathlessly.

"Oh, I know! But, you are so good,
Herbie
! The best! Why, I've never known anyone like you before!"

Herb flushed at the generous praise; he couldn't deny he was flattered, but a man could only go on for so long.

He hedged. "Thank you, Holly. But aren't you feeling a little bushed?" He hoped!

Herb's hopes of an honorable out wilted in the hot afternoon sun. He sighed audibly.

This was Holly's signal to wheedle. She put her arms around his neck, heedless of the fine view of her bust this afforded Herb. Herb was not heedless. He heeded for all he was worth.

"Please
Herbie
," she said with the sweet pout her lips formed with such expertise. Her fresh breath tickled his ear, and his firm resolve melted down to a watery puddle that seemed to form in his knees. It was all over.

"You win," he said weakly. "But this is the last time today-or at least until after lunch." He braced himself. "Take your position!"

Holly squealed with girlish glee and scampered to the other side of the nets to retrieve her stringed bat. "My serve!" she called gaily, giving the small yellow ball a swat. It bounced neatly up and across to meet Herb's bat for a quick return. Their sixth match of the day was on.

Holly was one of several playmates Herb had met since coming to the city of Avocado for an extended vacation. Elite Club Algae was a small resort spa by Sea Weed for the idle, rich, and bored of this part of P#23. Herb added "the confused" for his category, for now that he was here, he hardly knew why.

The club had been touted in the colorful brochure as a hot bed for singles, but the actual selection, in his opinion, left much to be desired. First there was Rosy, who had attached herself to him the first day he arrived. While she was a sweet, friendly girl with a pretty face, she also happened to be there for the serious purpose of dropping over a hundred and fifty pounds at the exclusive spa. Clearly, too much woman for him.

Then, there was the dark exotic Flora, a winsome widow, who kept dropping hints of
Ip
. Tempting, yet he had the uncomfortable feeling that she regarded the resort as a shopping center for husband number four. Or was it five? And what had happened to the other three anyway? There was covert talk of poison ivy. Probably just pool gossip, but why take chances? True, she was mysteriously attractive, yet there was something in her eyes when she looked at him. Something unsavory that reminded him of the hungry glance of a big garden spider patiently awaiting the right moment to pounce.

Most of the others he had met had been the usual garden-variety types one would expect to meet at a singles resort. Just pretty, pleasant girls, hoping to meet a cute boy they could take back home to meet their parents. They claimed to be there for the moment, for a good time, but Herb was not deceived. He had seen that look before, on girls at home. On the face of one girl in particular. Those girls were just like her. Herb was getting thoroughly disgusted with his big adventure. If he had wanted a "nice" girl, he would have stayed at home and dated Lily.

He had left to find more. Whatever that was. Since his arrival a couple of weeks ago the wildest thing he had swung with had been a gourd club on the neatly mown greens. Holly had been the most promising of the group. Had been. Just his
luck, that
she had turned out to be a ten nets nut. These daily marathon matches had to stop! By the time he satisfied her insatiable lust for the silly game he was too tired for more pleasurable recreation. A thing like that could stunt a man's growth.

He had
Ip
with Holly only once after a long, romantic boat cruise beneath the misty tri-moons, and that had been almost a week before. They had stopped into the Algae Bar afterward where she had quaffed down more than a few drinks of distilled water before Herb had noticed the effect they were having on her. Oh, they looked harmless enough with their carrot sticks and little umbrella trees, but cumulatively they packed quite a punch.

By the time he realized what was happening, Holly was wilted. Like the gentleman he was, he had guided her back to her own bungalow and put her to bed with every intention of fading quietly away until morning.

Holly, however, had different ideas. Unused to strong drink, she implored Herb to remain until she fell asleep, but somehow she never did, and eventually nature took a fascinating course. Herb felt only mild guilt, which had soon faded to a fond memory, and progressed to outright lust as he looked forward to more of her company. Not letting any grass grow under his feet, he called the next morning. They met for a game of ten nets, and his beauty turned into a back-hand beast. There had been, regrettably, no rematch of their night game.

Herb had come to the end of his rope, deciding to give it just one more day. If there were no improvements, he planned to push on down the coast and catch the Party Grass Festival at New Oleanders. There should be profusions of wild flowers there.

A ball whizzed by his ear, as his bat swished impotently in the air. "I win!" Holly exclaimed triumphantly, crisscrossing through the nets toward him. "Got that one right past you!" Then she frowned slightly. "Oh, you didn't let me win, just to be a gentleman, did you? I want a rematch!"

"Blight, no," Herb muttered, thinking how tired of the stupid game he was, in more than one way. "I mean, of course I wouldn't do that, Holly. You won because you're a good player, that's all."

And because his mind had wandered. She was enthusiastic, but he had all the moves; a pity, considering that she cared more about it than he did. Looking at her bosom heaving from the combination of happiness and exertion, he was glad she was the winner. Herb watched that lovely structure quiver beneath the thin material of her ten nets suit as she continued to bask in the glory of her victory.

"That's what I love about playing with you, Herb. You are a real natural at this game, and I knew if I could beat you, I would really have accomplished something. So I said to myself, 'Holly, you are going to play until you win, or drop.' "

Herb cursed silently. That was all it would have taken? He would gladly have thrown the match long before if only he'd known.

But no, his male ego sprang up like an ugly weed, and what had happened? Nothing, that's
what
. How was he to know she hadn't expected him to win all the time to impress her? She was always going on about how great he was. Women. Did they never mean what they said?

Herb looked into her beaming eyes and felt a tinge of guilt. After all, men didn't always mean what they said either. Hadn't he been the one to say how he loved ten nets, while in reality he wanted to play a more intimate game?

"Congratulations," he said wearily. "How about that lunch now? Nice cool melon?"

Holly ventured a coy smile, lowering her long green lashes. "Are you really hungry, Herb? I'm still so excited over winning the game, and hot, too!" She stroked a manicured hand across her bust line. "Before lunch, wouldn't you like to relax? Come back to my bungalow for a nice shower?"

A cold shower would be in order at the moment, Herb thought. What was going on now? He was beginning to warm up from more than the game.

"On second thought, no shower. Why don't we make use of that hot tub? I'm paying enough extra for it. It's cozy, but roomy enough for two," she said huskily.

Herb decided that the Party Grass Festival could wait another day. Maybe two.

Indeed, things finally were going right. This time Holly wasn't intoxicated on distilled water, but she was actually more ardent. The excitement of the ball game translated nicely into enthusiasm for the bedroom game as played in hot water, and Holly was a real delight.

"Too bad we didn't think to do this sooner," she murmured. "It's even more fun than balling!"

Herb didn't answer. His sentiments about timing were mixed. If only he had caught on to the key days ago...

Later that evening, Herb Moss was a mildly contented being. He'd reluctantly put Holly aboard the last transporter home. Her vacation was over, but she had left him with at least two nice memories.

The Shameful Suicide of Winston Churchill by Peter Millar
The Drowning Man by Vinduska, Sara
Reckless in Texas by Kari Lynn Dell
Meant to Be (RightMatch.com Trilogy) by Shay, Kathryn
Changing Vision by Julie E. Czerneda
Secrets of a Spinster by Rebecca Connolly
The Barn House by Ed Zotti
Devil's Tor by David Lindsay
French Leave by Anna Gavalda
Necromancer Awakening by Nat Russo
Our partner