Read The Shadows of God Online

The Shadows of God 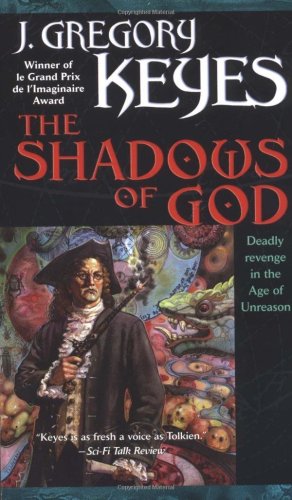 BOOK FOUR: THE SHADOWS OF GOD

As the armies of the Malakim advance, led by a child of bright and burning THE SHADOWS OF GOD

power, Benjamin Franklin must summon all his ingenuity for the desperate attempt to preserve not just the freedom of his country, but its very existence.

For behind the wars of humanity there are other wars, fought by aetheric beings of immense strength and conviction.

The Malakim may be angels…
or demons.
All that’s certain is that when the war in heaven is over, there won’t be much—if anything left of Earth.

As the ruthless forces of Russia lay waste to the New; World, English troops make landfall in the east, determined to reconquer the colonies. Trapped in between lies a motley collection of Native Americans, ex-slaves, and refugees of the European catastrophe, led by Franklin and the Choctaw shaman Red Shoes. In that struggle, Red Shoes may prove his most potent ally…and his most dangerous threat.

In this stunning conclusion to The Age of Unreason series, the balance of power lies with Adrienne de Montchevreuil, whose grasp of science is the equal of Franklin’s, and whose magic may be stronger even than that of the Choctaw. Only with her help can they hope to defeat the Sun Boy and his Malakir masters. But Adrienne has a shocking secret of her own, calling into question where her true allegiances may lie…

Book Four of
The Age of Unreason

The Ballantine Publishing Group • New York
THE SHADOWS OF GOD

Published by The Ballantine Publishing Group

All rights reserved under International and Pan-American Copyright Conventions. Published in the United States by The Ballantine Publishing Group, a division of Random House, Inc., New York, and simultaneously in Canada by Random House of Canada Limited, Toronto.

Del Rey is a registered trademark and the Del Rey colophon is a trademark of Random House, Inc.

Manufactured in the United States of America First Edition: July 2001

Thanks to the editing team—Veronica Chapman, Martha Schwartz, Betty Harris, Melanie Gold, and Alix Krijgsman, who managed things. As usual, Terese Nielsen provided a wonderful painting, which Min Choi and art director Dave Stevenson transformed into a terrific cover. Thanks to Nell Keyes, Kris Boldis, and Ken Carleton for giving me their impressions of the manuscript.

THE DESIGNE OF THE APOCALYPSE

3. Return of the Margrave

7. Guns on the Altamaha

8. In the Navel of the World

ON THE SHOULDERS OF GIANTS

Prologue
THE SHADOWS OF GOD

“Why? Why send it back?” he asked, though the sight of the thing, even as it diminished, made him tremble. It was now half the size it had been, a great black cyclone with a heart of crackling white fire. His airship, the
Elisha,
was poised high above that terrible eye. Around and beyond, the plains of America stretched away, rolling and bare as the steppes of his native Russia.

“Because it is not yet time,” Swedenborg’s detached voice answered.

“It is not yet time,” Swedenborg repeated, turning his face toward Golitsyn.

The prince shivered again. The sorcerer’s face was framed by wild, unbound hair; and he wore a pair of oculars that made him look like some sort of a blind insect.

“Professor Swedenborg, with all due respect, I am the commander of this expedition in matters military. I need a better explanation than that. Why should I waste the lives of my men or trust our untested Indian and Mongol troops when we have
that?”

The eye was nearly closed. Where it had passed nothing remained but white ash. Tens of miles of ash. No tree, no living thing, not even bones were left to tell that once there had been life where Swedenborg’s dark engine had churned.

For answer, the sorcerer merely turned away, lost in whatever he saw behind those thick lenses.

Golitsyn leveled a frustrated gaze on the third person clutching the bow rail, the metropolitan of Saint Petersburg.

“Your Grace, speak to him. Get some sense from him.”

The priest pursed his lips and stroked his long gray beard. “What is there to say?” he asked. “Swedenborg has the angels. The blessed saints speak to him, not to me. It is as God wills it. But he has shown me glimpses — ” The metropolitan shook his head. “It is too much for mortal man, even for the patriarch. That is why Swedenborg is mad. But it is a holy madness.”

“Everyone is mad,” Golitsyn exclaimed. “I am mad. I’ve betrayed my tsar and led an army into the wilds of America, for what? It’s all lunacy.”

The metropolitan raised an eyebrow. “Neither I nor Professor Swedenborg had anything to do with that. You did what you did from lust for power, not from any desire to serve God. Swedenborg’s motives are pure. My motives are pure.

Yours have never been, and so it is not your place to question us.”

“But how can you be sure? How can you be sure this —this
boy
we bow to is really the child of God and not the devil? What is our purpose in this limitless desert? What care we for the American colonies, when we could have the empire of the Turk at our feet, the riches of China?

“How can —” He broke off, for Swedenborg was looking at him again. The professor was a soft-spoken, polite, gentle man, and yet the words that now issued from his mouth were clipped and grim, almost another voice altogether.

“Prince Golitsyn, you do not, cannot, comprehend what lies ahead. I can. The American colonies are the last refuge of the godless science. It is where the devil has dug his cave and built his watch-tower. It is where he crafts his hideous strength into knives and guns. We are the chosen, the servants of the prophet, the champions of godly science. What more do you need to know?”

“And yet we consort with the ungodly,” Golitsyn argued. “What is godly in the gibbering idolatry of the Mongols or the pagan superstitions of the Indians?”

He turned to appeal to the metropolitan. “Surely, Your Eminence — ”

“All will come to God,” the metropolitan said. “Though they be pagan, still they have eyes to see. They recognize the prophet for what he is. Indeed, it seems that everyone but
you
sees that truth.”

“I — ” Golitsyn’s mouth went dry. Behind Swedenborg, something had THE SHADOWS OF GOD

appeared. It was the shape of a nude man, a silvery, translucent cloud. It had no face as such, but it had eyes everywhere. They winked and blinked on its palms, arms, belly, thighs. Pale blue and green eyes, all watching him, all seeing the darkness in his heart.

The thing leveled an accusing finger at him, but it was Swedenborg who spoke.

“Stay on the path, Prince Golitysn. The apocalypse is done, and the world is ended. Now is only the sorting of things. All souls that do not follow me are damned. The prophet is my servant. Swedenborg is my mouth. The metropolitan is my text. I thought you were my sword. If you are not, I must forge another.”

Golitsyn dropped to his knees. “No. No! I am yours. I just don’t understand why we can’t use our best weapons, why we must keep them in reserve.”

“Because something remains,” Swedenborg replied huskily. “Something needs to be found. When we have it, there will be no need of the engines at all.”

“You are a sword, Prince Golitsyn. Be content with that.”

It was a command, not a suggestion.

Tsar Peter the Great dipped his paddle in the water and gave an exclamation of pleasure as the canoe slid into the stream.

“It’s good to be on the water again,” he said. “I’ve always loved ships, great and small.”

Behind him, the broken-nosed giant named Tug grunted vague disapproval.

“You don’t share my love, sir?” Peter asked. “I thought you had been a sailor.”

scurvy, and the black bellyache. An“ when you finally come ashore, they sell you watered rum and poxy whores. No, sir tsar, it’s no life.”

“To each his own. I love the swell of the sea, the feel of a boat. When I was building my navy, I myself went in disguise to the shipyards in Holland and learned the shipwright’s art, working as a common laborer.”

Peter thought for a moment.
“The Catherine,”
he said softly, “for my late wife.”

The third man in the boat, an Indian named Flint Shouting, said nothing but sullenly dipped his paddle in the water, propelling them along.

They camped that night on a sandy natural levee, and Peter and Flint Shouting built a fire with the sticks at hand while Tug searched for more wood. The Indian went about his task with quiet efficiency. He was a changed man. When first the tsar had met him, he had been a boisterous, talkative fellow, always quick with a laugh and a joke. Now, he might go days without speaking.

“Why are you still with us?” Peter asked him, poking at the fire. “I know you care little for us.”

Flint Shouting didn’t answer at first, and after a time Peter didn’t think he would.

“I did not always like the people of my village,” he finally said in a surprisingly weary voice. Peter thought there ought to be anger there, or hatred, but it seemed to be mostly just exhaustion. “But they were
my
people. They did not deserve to be rooted up and burned like weeds. And I brought their killer to them. I smiled, and I told them Red Shoes was a fine fellow, and they let him into the village. And he killed them all.”

Flint Shouting nodded. “I will kill Red Shoes,” he said softly. “To kill him I THE SHADOWS OF GOD

must find him. Red Shoes is a Dream Walking, and I am not a magician. I cannot see him. He leaves no tracks, breaks no branches, bends no grass. I cannot find him.” He looked up at the tsar and met his eyes squarely. “But one day Red Shoes will find
you.
And Tug. And then I will kill him.”

Peter didn’t flinch at the icy promise. After all, he, Peter Alexeyevich, had sent the heads of his rebellious Strelitzi guard rolling in the snow. He had ordered his own son knouted to death. However many men Flint Shouting promised to kill and then made good on, it was unlikely he could match Peter’s own record.

He clasped his hands together. “I already knew you wanted to kill him. I already knew why. I just wanted to know why you hadn’t left Tug and me to do so. So tell me—you say Red Shoes is a Dream Walking. What does that mean?

What happened to him? He was once our friend, I would swear it. He saved my life. But your village…”

Ducal Encounters 02 - With the Duke's Approval by Wendy Soliman
The Passionate Sinner by Violet Winspear
Three Little Words by Maggie Wells
The Art of My Life by Ann Lee Miller
Football Frenzy by Alex Ko
Canyons Of Night by Castle, Jayne
Inside Apple: How America's Most Admired--and Secretive--Company Really Works by Adam Lashinsky
The Secret to Success by Eric Thomas
Death Song by McGarrity, Michael
Mending the Rift by Chris T. Kat
Our partner