Read The Ship Who Won Online

The Ship Who Won 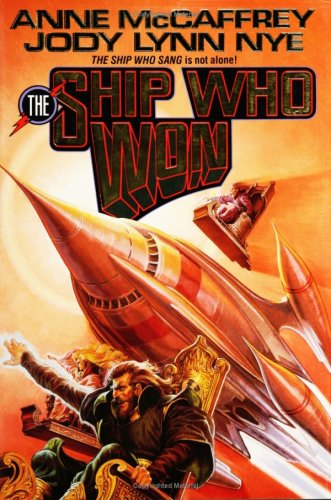 The ironbound door at the end of the narrow passageway creaked open. An ancient man peered out and

focused wrinkle-lapped eyes on Keff. Keff knew what the

old one saw: a mature man, not overly tall, whose wavy

brown hair, only just beginning to be shot with gray, was

eyes. A nose whose craggy shape suggested it may or may

not have been broken at some time in the past, and a

mouth framed by humor lines added to the impression of

one who was tough yet instinctively gentle. He was dressed

easy air of someone who knew how to use it. The oldster

wore the shapeless garments of one who has ceased to care

for any attribute but warmth and convenience. They studied each other for a moment. Keff dipped his head slightly

"Is your master at home?"

"I have no master. Get ye gone to whence ye came," the

ancient spat, eyes blazing. Keff knew at once that this was

himself! He straightened his shoulders, going on guard but

seeking to look friendly and non-threatening.

out of the doorway only inches from his feet and skittered

away through the gutters along the walls. A disgusting

place, but Keff had his mission to think of.

"Get ye gone," the old man repeated. "I've nothing for

you." He tried to close the heavy, planked door. Keff

pushed his gaundeted forearm into the narrowing crack

and held it open. The old man backed away a pace, his

"I know you have the Scroll ofAlmon," Keff said, keeping his voice gentle. "I need it, good sir, to save the people

of Harimm. Please give it to me, sir. I will harm you not."

'Very well, young man," the wizard said. "Since you

threaten me, I will cede the scroll."

Keff relaxed slightly, with an inward grin. Then he

caught a gleam in the old mans eye, which focused over

Keffs shoulder. Spinning on his heel, Keff whipped his

narrow sword out of its scabbard. Its lighted point picked

ruffians who had stepped into the street behind him. He

One of the ruffians showed blackened stumps of teeth

in a broad grin. "Going somewhere, sonny?" he asked.

"I go where duty takes me," Keff said.

His sword on high, the ruffian charged. Keff immediately blocked the mans chop, and riposted, flinging the

mans heavy sword away with a clever twist of his slender

blade that left the mans chest unguarded and vulnerable.

He lunged, seeking his enemy's heart with his blade. Stumbling away with more haste than grace, the man spat,

gathered himself, and charged again, this time followed by

the other two. Keff turned into a whirlwind, parrying,

THE SHIP WHO WON 3

thrusting, and striking, holding the three men at bay. A

near strike by one of his opponents streaked along the wall

by his cheek. He jumped away and parried just before an

He lunged, and the hot point of his epee struck the

middle of the chief thugs chest. The body sank to the

There!" Keff shouted, flicking the sword back and

forth, leaving a Z etched in white light on the air. "You are

not invincible. Surrender or die!"

getting in each others way while Keffs blade found its

mark again and again, sinking its light into arms, shoulders,

chests. In a lightning-fast sequence, first one, then the

other foe left his guard open a moment too long. With

groans, the villains sank to the ground, whereupon they too

vanished. Putting the epee back into his belt, Keff turned

to confront the ancient wizard, who stood watching the

proceedings with a neutral eye.

"In the name of the people of Harimm, I claim the

Scroll," Keff said grandly, extending a hand. "Unless you

have other surprises for me?"

"Nay, nay." The old man fumbled in the battered leather

scrip at his side. From it he took a roll of parchment, yellowed and crackling with age. Keff stared at it with awe.

He bowed to the wizard, who gave him a grudging look of

The scroll lifted out of the wizards hand and floated

toward Keff. Hovering in the air, it unrolled slowly. Keff'

squinted at what was revealed within: spidery tracings in

"Hold it," the wizard said, his voice unaccountably

changing from a cracked baritone to a pleasant female alto.

laser epee and throwing himself into the crash seat at the

control console. "I was enjoying that. Whew! Good workout!" He pulled his sweaty tunic off over his head, and

mopped his face with the tails. The dark curls of hair on his

broad chest may have been shot through here and there

with white ones, but he was grinning like a boy.

"You nearly got yourself spitted back there," said the

acknowledging ID signals to the SSS-900. "Watch your

back better next time."

"No points for unfinished tasks. Maps are always

unknowns. You'll have to follow it and see," Carialle said

coyly. The image of a gorgeous lady dressed in floating sky

blue chiffon and gauze and a pointed hennin appeared

briefly on a screen next to her titanium column. The lovely

vanished. "SSS-900, this is the CK-963 requesting permission to approach and dock-Hello, Simeon!"

"Carialle!" The voice of the station controller came

through the box. "Welcome back! Permission granted,

happened in the year since you've been away. Keff, are you

Keff leaned in toward the pickup. "Right here, Simeon.

We're within half a billion klicks. Should be with you

"It'll be good to have you on board," Simeon said.

"We're a little disarrayed right now, to put it mildly, but you

didn't come to see me for my housekeeping."

THE SHIP WHO WON

"No, cookie, but you give such good decontam a girl can

hardly stay away," Carialle quipped with a naughty

staring at his scopes. "What happened around here?"

The scout ship threaded its way through an increasingly

cluttered maze of junk and debris as they neared the rotat-ing dumbbell shape of Station SSS-900. After viewing

Keffs cause for alarm, Carialle put her repulsors on full to

avoid the very real possibility of intersecting with one of

the floating chunks of metal debris that shared a Trojan

point with the station. Skiffs and tugs moved amidst the

shattered parts of ships and satellites, scavenging. A pair of

battered tugs with scoops on the front, looking ridiculously

and vanes of passing ships without ever being detected by

the crews inside. The cleanup tugs sent hails as Carialle

passed them in a smooth arc, synchronizing herself to the

spin of the space station. The north docking ring was being

repaired, so with a flick of her controls, Carialle increased

thrust and caught up with the south end. Lights began to

chase around the lip of one of the docldng bays on the ring,

and she made for it.

"... so that was the last we saw of the pirate Belazir and

good, I hope. My shell has been put in a more damage

resistant casing and resealed in its pillar. We've spent the

last six months healing and picking up the pieces. Still

waiting for replacement parts. The insurance company is

being sticky and querying every fardling item on the list,

but no ones surprised about that. Fleet ships are remaining

in the area. We've put in for a permanent patrol, maybe a

"You have had a hell of a time," Carialle said,

"Now let's hear the good news," Simeon said, with a

sudden surge of energy in his voice. "Where ve you been

"We're pleased to announce that star GZA-906-M has

message to Xeno and Explorations. They're standing by for

a full report with samples and graphs, but me first! I want

star chart and xeno file to Simeons personal receiving frequency. 'This is a precis of what we'll give to Xeno and the

benchmarkers," she said. "We'll spare you the boring

"If there's any bad news," Keff began, "it's that there's

no sentient life on planet four, and planet three s is too far

down the tech scale to join Central Worlds as a trading

partner. But they were glad to see us."

"He thinks," Carialle interrupted, with a snort. "I really

an exasperated glance at her pillar, which she ignored. She

clicked through the directory on the file and brought up

the profile on the natives oflricon III.

"Why do you call them the Beasts Blatisant?" Simeon

asked, scanning the video of the skinny, hairy hexapedal

beings, whose faces resembled those of intelligent grass-hoppers.

"Listen to the audio," Carialle said, laughing. 'They use

THE SHIP WHO WON 7

a complex form of communication which we have a sociological aversion to understanding. Keff thought I was

blowing smoke, so to speak."

'That's not true, Can," Keff protested. "My initial conclusion," he stressed to Simeon, "was that they had no

need for a complex spoken language. They live right in the

swamps," Keff said, narrating the video that played off the

datahedron. "As you can see, they travel either on all sixes

or upright on four with two manipulative limbs. There are

numerous predators that eat Beasts, among other things,

and the simple spoken language is sufficient to relay information about them. Maintaining life is simple. You can see

that fruit and edible vegetables grow in abundance right

there in the swamp. The overlay shows which plants are

"Not too many," Simeon said, noting the international

symbols for poisonous and toxic compounds: a skull and

crossbones and a small round face with its tongue out.

"Of course the first berry tried by my knight errant, and

I especially stress the errant," Carialle said, "was those

raspberry red ones on the left, marked with Mr. Yucky

"Well, the natives were eating them, and their biology

isn't that unlike Terran reptiles." Keff grimaced as he

admitted, "but the berries gave me fierce stomach cramps.

I was rolling all over the place clutching my belly. The

Beasts thought it was funny." The video duly showed the

hexapods, hooting, standing over a prone and writhing

"It was, a little," Carialle added, "once I got over being

worried that he hadn't eaten something lethal. I told him

The Particle at the End of the Universe: How the Hunt for the Higgs Boson Leads Us to the Edge of a New World by Carroll, Sean
Breeze off the Ocean by Joan Hohl
Bedded by the Boss by Chance, Lynda
Hacia la Fundación by Isaac Asimov
Confessions by Collins, Janice
Trent by Kathi S. Barton
The Detective Inspectors (The Doorknob Society Saga Book 4) by Fletcher, MJ
Chasing Castles (Finding Focus #2) by Jiffy Kate
The House of Tudor by Alison Plowden
- Hard Fall by James Buchanan
Our partner