The Ships of Earth: Homecoming: Volume 3 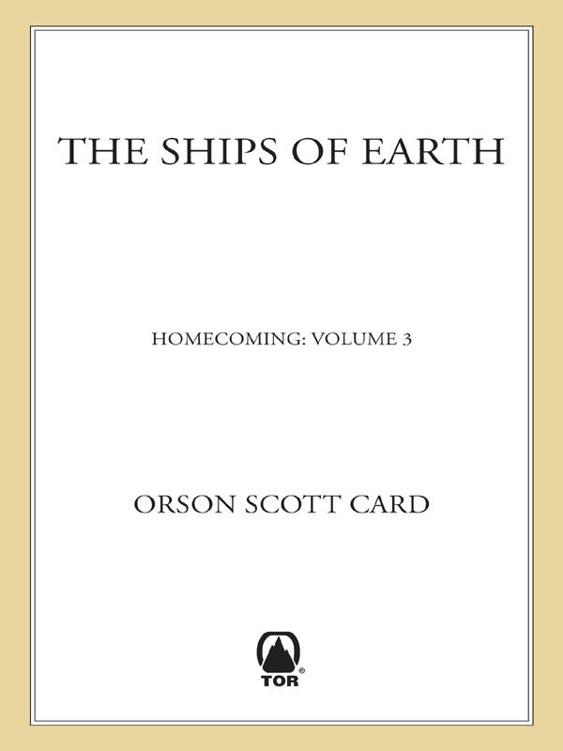 PRAISE FOR PREVIOUS BOOKS IN THE HOMECOMING SERIES

On
THE CALL OF EARTH

“Suggests a setting and a theme vaguely reminiscent of Arthur C. Clarke’s
The City and the Stars
—the rediscovery of human will in a society whose technological control begins to falter—but overlays this with an odd mix of biblical overtones and Machiavellian militarism. There seems little doubt that the whole series will prove as readable—and as morally committed—as we’ve come to expect from Card.”

“[Card has] found his own voice, and turned into a thoughtful and inventive stylist.” —
Los Angeles Daily News

“Like any Card book, this sequel to
The Memory of Earth
involves many complicated decisions made by machines as well as humans.... Well-rounded characters keep [the plot] viable, and the dialogue is superb.” —
Publishers Weekly

“The emphasis in
The Call of Earth
is on a family saga (centering around the remarkable matron in Basilica) and a political upheaval (instituted by one brilliant, ambitious general). A genuinely interesting feminist quasi-utopia clashes with power politics, while the Oversoul plies its wiles and the book’s Biblical elements raise odd echoes, with their patriarchs and Cities of the Plain, their prophets and tempters, Jezebels and wise virgins.” —Faren Miller,
Locus

On
THE MEMORY OF EARTH

“As a maker of visions and a creator of heroes whose prime directive is compassion, Card is not to be outdone.”

“Card is a master storyteller, and
The Memory of Earth
is eminently readable.” —
The Seattle Times

“
The Memory of Earth
succeeds because Card lets his characters dominate the story. The plot develops smoothly, revealing the structure of Harmon’s society in a way that seems natural, and when the world’s ideological assumptions are explored, their explication is never forced. The author examines big issues, but he is showing rather than telling, leading instead of lecturing. He creates anticipation for the next volume.” —
The Cleveland Plain Dealer

“Card is an excellent storyteller who conveys not only action, but complex family relationships and difficult ethical dilemmas.” —
The Denver Post

“
The Memory of Earth
is several notches above the typical post-apocalyptic quest story set in a low-tech society with oddly high-tech features.... This may turn out to be the kind of series that all other of its type inadequately imitate.”

“
The Memory of Earth
succeeds.... The plot develops smoothly, revealing the structure of Harmony’s society....[Card] left me anticipating the next volume.”

“There is no denying the power of his storytelling, and the vision. There is no chance that this commercial House of Card will topple.” —
SF Commentary

THE SHIPS OF EARTH

To Bill and Laraine Moon
with fond memories of temples and malls,
of copy machines and newsletters,
of great kids and good company;
of love freely given and honor unyielding.

This was the novel that fate did not want me to write. I had set aside a good part of the summer to write it—even canceled a free trip to Australia because it would have come right in the middle of this project. Then, because that’s how the world works, I suddenly found myself touring America signing copies of
Xenocide
, which for various excellent reasons had been released a couple of months early. Then, when I got home, we were caught up in the process of getting ready to move across town into a new house—we were going to be renters no more! Add to that the seductive details of remodeling the new house to contain not so much us as our computers, and I could see there was no way I’d be able to concentrate on writing
Ships of Earth
unless I went into hiding.

Which is precisely what I did. Poor Clark and Kathy Kidd! They must have thought that somehow, accidentally, back in the Pleistocene, they had spawned a child who now had come home to live with them! I descended on their house in Sterling, Virginia, took over their diningroom table, and then buried myself in writing. I surfaced
only when two different computers failed on me and I had to whine and beg for Northgate to replace them. And when Clark and Kathy got a free weekend at Rehoboth Beach, there I was, tagging along—the first draft of
Chapter 6
has Delaware sand in it. Yet through it all, the Kidds pretended they were having a wonderful time, and I’m grateful to them.

Much as I owe Clark and Kathy, though, I owe as much again to my wife, Kristine, and our assistant, Erin Absher, who kept our home running, our children alive, and the remodeling of the new house on track despite a plethora of disasters, major and minor. Kristine also managed to
read
this book and comment on it, making me take out the really icky parts—which greatly improved the novel, you may be sure! I can’t write without peace of mind, and that was the gift that, among them, Kristine and Erin and Clark and Kathy gave to me, each in their own way.

I must also tip my hat to Shirley Strum, author of
Almost Human
, the book that gave me the baboons in
Ships of Earth
, which are some of my favorite characters; and to Beth Meacham, my editor, and Barbara Bova, my agent: Thank you for enduring all my whimpering, and helping me in so many ways that the public will never know about and that I will never forget.

1. THE LAW OF THE DESERT

5. THE FACE OF THE KEEPER

Because of the marriage customs in the city of Basilica, family relationships can be somewhat complex. Perhaps these parentage charts can help keep things straight. Women’s names are in italics.

(her prize students, “adopted” into a permanent relationship of sponsorship)

Monster Baiter (An Obscure Magic Book 6) by Viola Grace
Like We Care by Tom Matthews
On the Edge of the Dark Sea of Darkness by Andrew Peterson
Bad Boy Stepbrother by Sybil Ling
Her Prince Charming: An Inspirational Romance by Faith Austen
Close to the Bone by Stuart MacBride
The Guardian by Connie Hall
I Am China by Xiaolu Guo
The Nazi Hunters by Andrew Nagorski
The Marquise of O and Other Stories by Heinrich von Kleist
Our partner