Read The Silence of the Sea Online

The Silence of the Sea 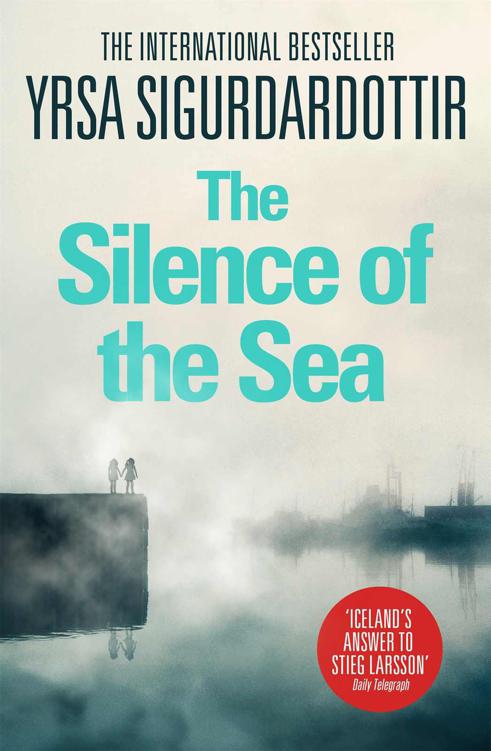 My Soul to Take

The Day is Dark

Someone to Watch Over Me

Yrsa Sigurdardóttir works as a civil engineer in Reykjavik.
The Silence of the Sea
is her seventh adult novel.

The right of Yrsa Sigurdardóttir to be identified as the Author of the Work has been asserted by her in accordance with the Copyright, Designs and Patents Act 1988.

This book is dedicated to my grandfather, Þorsteinn Eyjólfsson, ship’s captain (1906–2007)

Special thanks are due to Michael Sheehan for explaining various points in relation to yachts and sea voyages; Arnar Haukur Ævarsson, first mate, for sharing his knowledge of telecommunications at sea, steering systems and other aspects of navigation; and finally Kristján B. Thorlacius, advocate to the Supreme Court, for information on the legal side of missing persons’ cases. The responsibility for any mistakes is entirely my own.

Brynjar hugged his jacket tighter around him, thinking longingly of his warm hut and wondering what on earth he was doing out here. It just went to show how dull his job was that he should jump at any chance of a diversion, even if it meant having to endure the biting wind. As usual at this late hour the port he was supposed to be keeping an eye on was deserted, and it suddenly struck him that he didn’t know it any other way. He avoided its daytime bustle, preferring it like this – black sea, unmanned ships – as if seeing how it came to life when he wasn’t there brought home to him his own insignificance.

He watched an old couple walk out onto the docks, leading a little girl between them. Not far behind them was a young man limping along on crutches, which struck Brynjar as no less odd. Glancing at his watch, he saw that it was nearly midnight. Though childless himself, he knew enough about parenting to realise that this was a strange hour for a toddler to be up and about. Perhaps, like him, these people were braving the bitter cold to see the famous yacht that was due any minute now. Come to think of it, they were probably here to meet a member of the Icelandic crew. Brynjar decided not to approach them in case he was right. After all, they had a reason to be there, whereas he was simply being nosy. Of course he could invent some official business, but he was a hopeless liar and there was a risk the explanation would come out all wrong.

Rather than stand there like a spare part, he walked over to a small van marked ‘Customs’, which had driven onto the docks half an hour ago and parked with a good view of the harbour. With any luck the driver would invite him to sit inside in the warm. As he tapped the window he noticed with surprise that it contained three customs officials instead of the usual one or two. The glass rolled down with a squeak, as if there was grit in the frame. ‘Good evening,’ he said.

‘Evening.’ It was the driver who replied. The attention of the other men remained riveted on the harbour.

‘Here about the yacht?’ Brynjar regretted approaching the van and felt his hopes of being offered a seat fading.

‘Yup.’ The driver looked away and stared in the same direction as his companions. ‘We’re not here for the view.’

‘A lot of you, aren’t there?’ Small clouds of steam accompanied his words but the three men took no notice.

‘Something’s up. Hopefully nothing serious, but enough to warrant dragging us out of bed.’ The driver zipped up his anorak. ‘They haven’t been answering their radio. Probably a technical fault, but you never know.’

Brynjar gestured to the people waiting on the quay. The child was now in the older man’s arms and the young man with the crutches had perched on a bollard nearby. ‘I expect they’re here to meet the yacht. Want me to go and check them out?’

‘If you like.’ The man clearly didn’t care what he did as long as he kept out of their way. ‘But I doubt they’re here to receive smuggled goods. We watched them arrive and none of them could so much as outrun a wheelchair. They’re probably just relatives.’

Brynjar straightened up, removing his arm from the window. ‘I’ll wander over anyway. Can’t do any harm.’ He received nothing in reply but a squeak as the window was rolled back up. He turned up his collar. The group on the quayside had to be better company than the customs men, even if they didn’t have a warm car to invite him into. A lone gull announced its presence with a squawk as it took off from a darkened streetlight and Brynjar quickened his pace, watching the bird vanish in the direction of the looming black shape of the new concert hall.

‘Evening,’ he said as he drew close. The group returned his greeting in a subdued manner. ‘I’m the port security officer. Are you waiting for someone?’

Even in the dim light the relief on the faces of the old couple was obvious. ‘Yes, our son and his family are due in shortly,’ said the man. ‘This is their youngest daughter. She’s so excited about Mum and Dad coming home that we decided to surprise them.’ He looked slightly embarrassed. ‘That’s all right, isn’t it?’

‘Of course.’ Brynjar smiled at the little girl, who peeped shyly from under the brim of a colourful knitted hat as she cuddled up to her grandfather. ‘So, they’re on the yacht, are they?’

‘Yes.’ The woman looked surprised. ‘How did you know?’

‘She’s the only vessel we’re expecting.’ Brynjar turned to the younger man. ‘You waiting for someone too?’

The man nodded and struggled to his feet. He hobbled over, seeming grateful to be included. ‘My mate’s the engineer. I’m giving him a lift home. Though if I’d known how cold it was I’d have let him take a taxi.’ He pulled his black woolly hat down over his ears.

‘He’ll certainly owe you big time.’ Brynjar caught sight of the doors of the customs van opening, and glanced out to sea. ‘Well, looks as if you won’t have to wait much longer.’ A handsome white prow appeared at the harbour mouth. The stories he’d heard about the yacht had been no exaggeration. Once the entire vessel had come into view, it didn’t take an expert to recognise that she was quite out of the ordinary, at least by Icelandic standards. ‘Wow.’ The exclamation was inadvertent and he was glad the customs men weren’t there to hear it. The boat rose almost three levels above the waterline, and as far as he could tell she had at least four decks. He had seen bigger yachts, but not often. Her lines were much sleeker, too, than the usual craft that called in here, evidently designed for more exotic purposes than mooring in Reykjavík harbour or braving northern waters; rather, she evoked visions of turquoise seas in balmier climes. ‘She’s a beauty,’ he murmured, but then he leant forward and frowned. Anyone would have thought the skipper was drunk; the yacht seemed to be heading perilously close to the harbour wall, moving much too fast. Before he could say another word there was a rending screech. It continued for a long moment, before tailing off.

‘What the hell …?’ The young man on crutches was staring aghast. He sagged towards the harbour wall for a moment, then straightened up and set off with a clatter. The customs officials had broken into a run, and the old couple’s mouths were hanging open. Brynjar had never seen anything like it in all the years he had worked at the port.

The strangest thing was the lack of any movement on board. No figures were visible behind the large windows of the bridge; no crew members appeared on deck, as one would have expected in the circumstances. Brynjar told the bystanders to stay put, adding hurriedly that he would be back. As he raced away he caught sight of the little girl, her eyes even wider than before, but with sadness now rather than timidity.

By the time he reached the other side of the harbour mouth, the yacht had come to rest against the end of one of the jetties. He was just envisaging a long, taxing night filling in forms when the massive steel hull crunched against the timber. The noise was ear-splitting, but over the din he caught a faint cry from behind him and felt a pang for the people waiting in the knowledge that their family and friends were on board. What on earth could be happening? The customs official had mentioned an equipment failure, but surely even a yacht with engine trouble could be steered better than this? And if not, what was the captain thinking, attempting to bring her in when he could easily have idled outside and radioed for assistance?

The bewilderment on the faces of the three customs men was probably mirrored on his own as they made their way warily along the jetty. ‘What’s going on?’ Brynjar grabbed the shoulder of the man bringing up the rear.

‘How the hell should I know?’ Though the man’s reply was curt, his voice sounded shaky. ‘The crew’s probably drunk. Or stoned.’

They reached the end of the jetty where it had been splintered by the ship’s bows, which were no longer streamlined and glossy but scratched and splintered. The shouts of the customs officials had gone unanswered and their leader was now on the phone, conversing in harsh tones with the police. Breaking off the call, he peered up at the bows looming over them. ‘I suggest we board her. The police are on their way and there’s no reason to wait. I don’t like the look of this. Fetch the ladder, Stebbi.’

The Stebbi in question didn’t look too thrilled, but turned and ran back to the vehicle. Nobody spoke. Every now and then they called out to the crew, but to no avail. Brynjar felt increasingly uneasy about the silence that met their shouts and was relieved when the man returned with the ladder. The eldest, who was evidently in charge, led the boarding party. Brynjar was given the role of steadying the ladder while the other three scrambled on board, and was still standing there alone when the police arrived. He identified himself while the officers shook their heads over the situation. Then one of the customs men appeared and leant over the rail again, looking even more incredulous than before. ‘There’s nobody on board.’

lightning witch 02 - lightning legacy by cyr, emily
One Night with the Doctor by Cindy Kirk
No Good Duke Goes Unpunished by Sarah MacLean
For the Love of a Pirate by Edith Layton
No Time for Tears by Cynthia Freeman
Voodoo Plague - 01 by Dirk Patton
Hero on a Bicycle by Shirley Hughes
So Tempting by Jean Brashear
Spin Doctor by Leslie Carroll
We're Working On It by Richard Norway
Our partner