The Snow Tiger / Night of Error 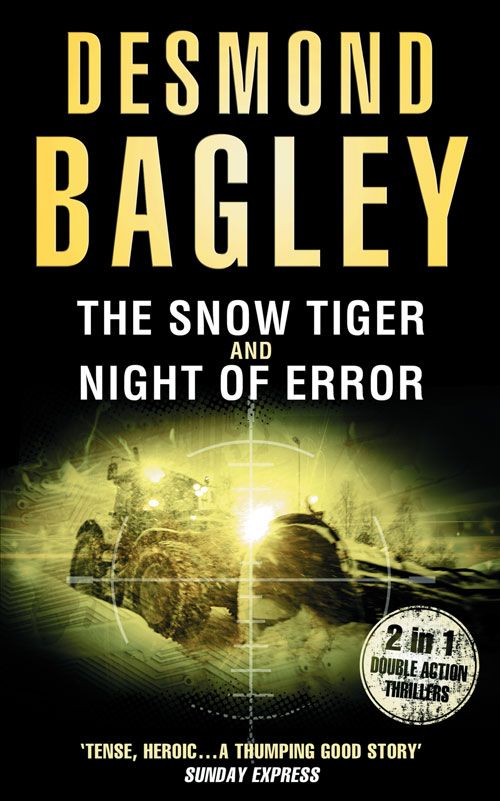 The Snow Tiger
AND
Night of Error

Also by the Author

To JOAN, on her birthday.
I said I would and I did.

Snow is not a wolf in sheep’s clothing – it is a tiger in lamb’s clothing.

Absence of body is preferable to presence of mind.

It was not a big avalanche, but then, it did not need to be very big to kill a man, and it was only because of Mike McGill’s insistence on the Oertel cord that Ballard survived. Just as a man may survive in an ocean with the proper equipment and yet drown in a foot of water, so Ballard may have perished in a minor slippage that would have gone unrecorded even in avalanche-conscious Switzerland.

McGill was a good skier, as might be expected considering his profession, and he had taken the novice under his wing.

They had met in the ski lodge during an après-ski session and had taken an immediate liking to each other. Although they were the same age McGill appeared to be the older man, possibly because of his more varied life, but he became interested because Ballard had much to teach of areas other than snow and ice. They complemented each other, which is not an uncommon basis for friendship among men.

One morning McGill proposed something new. ‘We’ve got to get you off the piste,’ he said. ‘And on to soft snow. There’s nothing like cutting a first track.’

‘Isn’t it more difficult than on the piste?’ queried Ballard.

McGill shook his head decisively. ‘A beginner’s myth. Turning is not quite as easy, but traversing is a cinch. You’ll like it. Let’s look at the map.’

They went up by the chair-lift, but instead of going down by the piste they struck off to the south, crossing a level plateau. After half an hour they arrived at the top of the clear slope which McGill had chosen, following local advice. He stopped, resting on his sticks, while he surveyed the slope. ‘It looks all right, but we won’t take chances. Here’s where we put our tails on.’

He unzipped a pocket of his anorak and produced a bundle of red cord which he separated into two coils, one of which he handed to Ballard. ‘Tie one end round your waist.’

‘It’s an Oertel cord – a simple device which has saved a hell of a lot of lives. If there’s an avalanche and you get buried there’ll be a bit of that red cord showing on the surface to show where you are so you can be dug out fast.’

Ballard looked down the slope. ‘Is there likely to be an avalanche?’

‘Not that I know of,’ said McGill cheerfully, knotting the cord around his waist.

‘I’ve never seen anyone else wearing these.’

‘You’ve only been on the piste.’ McGill noted Ballard’s hesitancy. ‘A lot of guys don’t wear cords because they think it makes them look damn fools. Who wants to go down a slope wearing a red tail? they say. To my mind they’re damn fools for not wearing them.’

‘Look,’ said McGill patiently, and pointed down the slope. ‘If I thought there was a serious avalanche risk down there we wouldn’t be going down at all. I checked on the snow reports before we left and it’s probably as safe as the nursery slopes. But
any
snow on
any
slope can be dangerous – and it doesn’t have to be in Switzerland; people have been caught in avalanches on the South Downs in England. The cord is just a precaution, that’s all.’

Ballard shrugged and began to tie the cord. McGill said, ‘We’d better continue your education. Do you know what to do if the snow does slide?’

McGill grinned. ‘You can do better than that. If it goes at all it will go under your skis or just behind you. It doesn’t go in a rush so you have time to think about what to do – not much time, mind you. If it goes underfoot you might have time to jump higher up the slope, in which case you’ll be out of it. If it starts sliding behind you and into you remember just one thing – you can’t ski out of it. I might be able to, but not you.’

‘The first thing is to get your wrists out of the loops of the sticks. Throw the sticks away, then snap off the quick release fastenings on your skis. They’re supposed to release automatically in a fall but don’t trust them. When the snow hits you start swimming upstream and try to head up to the surface. Hold your breath and don’t get bunged up with snow. When you feel yourself slowing bring one arm in front of your face, but not too close – that will give you an air space to breathe, and maybe you can shout so that someone can hear you.’ He laughed at the expression on Ballard’s face, and said lightly, ‘Don’t worry, it may never happen. Let’s go. I’ll go first, not too fast, and you follow and do what I do.’

He launched himself down the slope and Ballard followed and had the most exhilarating ride of his life. As McGill had said, turning was not as easy in the soft snow and his ankles began to ache, but schussing was a joy. The cold wind stung his cheeks and whistled past his ears with a keening sound but, apart from that, the only sound was the hiss of his skis as they bit into the virgin snow.

Ahead of him, at the bottom of the slope, he saw McGill execute a stop christiania and come to a halt. As he drew
alongside he said enthusiastically, ‘That was great! Let’s do it again.’

McGill laughed and pointed. ‘We have a way to go to get back to the chair-lift; it’s around the spur of the mountain. Maybe we’ll have another crack at it this afternoon.’

At about three in the afternoon they arrived at the top of the chosen slope and McGill pointed to the two sets of tracks. ‘There’s been no one here but us chickens. That’s what I like about this – it’s not as crowded as the piste.’ He handed an Oertel cord to Ballard. ‘You go first this time; I want to watch your technique on the way down.’

As he knotted the cord he studied the slope. The late afternoon winter’s sun was already sending long shadows creeping across the snow. McGill said, ‘Keep to the centre of the slope in the sunlight; don’t go into the shadowed areas.’

As he spoke Ballard took off, and McGill followed leisurely, keeping an eye on the less experienced skier and noting any faults for future instruction. All went well until he noted that Ballard was swinging to the left and towards slightly steeper ground where shadows lay. He increased speed, calling out as he did so, ‘Keep to the right, Ian. Keep to the main slope.’

Even as he shouted he saw Ballard apparently trip, a slight hesitation in the smooth downward movement. Then the whole slope started to slide taking Ballard with it. McGill skidded to a halt, his face pale, and kept his eyes on Ballard who was now plunging out of control. He saw him throw away his right stick and then Ballard was hidden in a swirl of powder snow. A rumble filled the air with the noise of soft thunder.

Ballard had got rid of his sticks but found himself in a world of mad instability. He managed to release his right ski but then found himself upside down and rotating violently. He struck out vigorously with his arms, sternly repressing the rising tide of panic within him, and tried to remember
McGill’s instructions. Suddenly he felt an excruciating pain in his left thigh; his foot was being twisted outwards inexorably until it felt as though his leg was being unscrewed from the hip.

He nearly passed out from the pain but, after a sharp intensification, the pain eased a little. The tumbling motion ceased and he remembered what McGill had said about making an air space about his mouth, so he brought up his left hand across his face. Then all motion stopped and Ballard was unconscious.

All that had taken a little over ten seconds and Ballard had been carried not much over a hundred feet.

McGill waited until there was no further snow movement and then skied to the edge of the disturbed scar of tumbled snow. He scanned it quickly then, jabbing his sticks into the snow, he removed his skis. Carrying one stick and one ski he walked carefully into the avalanche area and began to quarter it. He knew from experience that now time was of the utmost importance; in his mind he could see the graph he had been shown a few days earlier at the local Parsenndienst Station – the length of time buried plotted against the chance of survival.

It took him half an hour to explore the area and he found nothing but snow. If he did not find Ballard he would have to begin probing with little chance of success. One man could not probe that area in the time available and the best bet was to go to find expert help – including an avalanche dog.

He reached the lower edge of the slide and looked up indecisively, then he squared his shoulders and began to climb upwards again through the centre of the slide. He would make one quick five-minute pass and if he did not find anything by the time he reached the top he would head back to the ski lodge.

He went upwards slowly, his eyes flickering from side to side, and then he saw it – a tiny fleck of blood red in the
shadow of a clod of snow. It was less than the size of his little fingernail but it was enough. He dropped on one knee and scrabbled at the snow and came up with a length of red cord in his hand. He hauled on one end which came free, so he tackled the other.