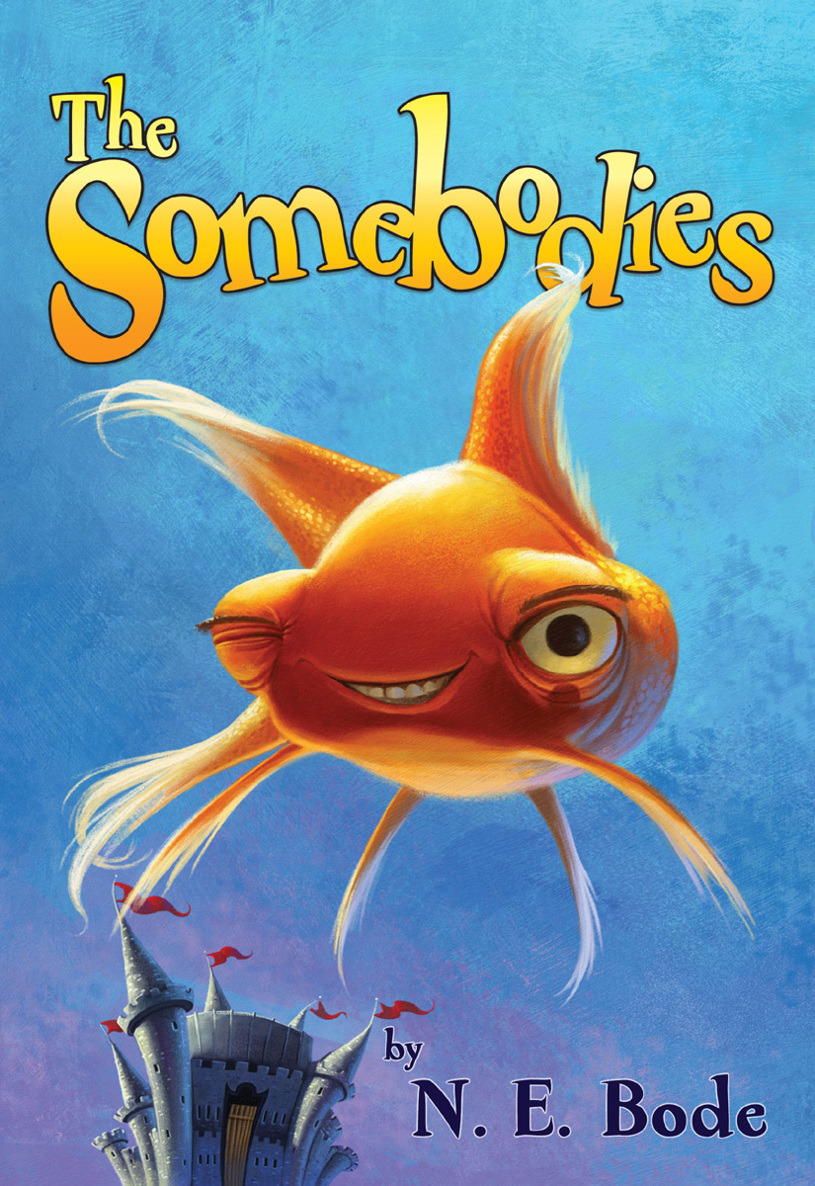 The Somebodies
by N. E. Bode
Illustrated by Peter Ferguson

THIS BOOK IS DEDICATED

to your soul—a stunning soul that is

not in the least bit ordinary

A Letter from N. E. Bode

1
The City Beneath the City

The City Beneath the City

3
The Bed Beneath the Bed

5
Pony on the Loose

5
The Brain as Altar

1
This Way to the Brain

The Secret Society of Somebodies

5
The Hole Left Behind

Other Books by N. E. Bode

A LETTER FROM N. E. BODE

Oh, smart and witty reader, so brave and true-hearted—

I think of you more often than you think of me.

I wonder if you’ve had a good day. Have you found a dollar in an empty bus seat, gotten six chicken nuggets in your five-pack, been told you arm-wrestle so well you could become famous for it? Or are you having a bad day—suffered a noogie, swallowed gum, eaten a bad taco?

I’ve known bad days. You see, my insanely jealous creative writing professor, whose name I will not disclose, has recently won a Guggenpulitzheimer, the famous, coveted literary prize. Maybe you’ve heard him speak on the radio—long, windy speeches on his
own rare talent and the benefits of having been born with a full set of pearly baby teeth, et cetera. I thought this bit of fame might lighten him up a little. But, alas, no. By the time I’d finished writing
The Anybodies
and was working on
The Nobodies
—both of which describe the all-true adventures of Fern and Howard—I was
still
dodging his vicious bunny attacks and his purposefully misguided wrecking balls. And I had resorted to living a haunted life in various disguises: rodeo clown, brain surgeon, fishmonger—you get the idea. My rare joy was when I called my editor on a pay phone and asked that she read me my fan mail. (Hello, Jack Reilly from Elsmere! Hello, Ursula the Brave and Leah of the breathless sentences! Hello, bitter nitpicker who fussed at me for ending my sentences with prepositions—thanks for noticing!) These joys were fleeting.

Shortly after I finished writing the stories of Fern and Howard, who are as smart and witty and brave and true-hearted as you, I became a shaking mess. I’d been hiding out and I’d been very sickly. I had no idea why I’d been so weak and exhausted and pale—a mere ghost of my true self. I thought perhaps the constant fear of my creative writing professor was getting to me. But, as Fern would later explain, I was caught up in something else, something much bigger and more sinister, some
thing that had to do with Anybodies, as well as the Somebodies and the dastardly Blue Queen!

But I’m getting ahead of myself here. I only learned all this after Fern got word to me through a company called Super Jack’s Singing Carrier Pigeon Telegram Message Service. The pigeon had a note attached to his little leg and tweeted, singishly, while I read.

In the note Fern explained that she and Howard had gone through a new adventure, and my sickness was a part of it all. Of course, I really wanted to write all about this adventure too, but I didn’t know how I’d be able to, what with my insanely jealous creative writing professor trying to off me at every sharp turn. I needed a safe haven. Happily, Fern and Howard knew the best hiding place in the world. I cannot tell you where—not yet. No, no, no. You’ve got to be patient for that.

But now, for those who don’t know who Fern and Howard are, or what an Anybody is, you don’t really have to run back to the first two books,
The Anybodies
and
The Nobodies
. (You can if you want to. Of course I’m not going to stop you!) Here is a short glossary of terms:

1.
AN ANYBODY
—a person who by nature or training (concentration and sometimes hypnosis) can transform objects into reality (for example, Fern once reached into a painting of a fishpond and petted the fish) and
who can transform themselves and others (a nun into a lamppost, a bad guy into a bull). Anybodies are shape changers in a way, as you’ll see, who are so in tune with the world’s constant state of change—the world is always changing, you know, and nothing stays the same—that Anybodies can change right along with it.

2.
FERN
—A girl who found out, not too long ago, that she was swapped at birth, and she isn’t the daughter of a pair of tragically dull accountants, the Drudgers, as she’d always thought. She’s actually an Anybody, and a royal Anybody, in fact. At the end of Fern’s exhausting but heroic summer camp adventure, her precious book,
The Art of Being Anybody
, had given Fern the crown and scepter, and the person who owns the crown and scepter is the royal ruler.

3.
HOWARD
—the boy who was mistakenly swapped at birth with Fern. Howard is the true son of the Drudgers—despite which, Fern and Howard are great friends, almost brother and sister.

4.
THE BONE
—Fern’s father. He was a washed-up Anybody who never was naturally gifted, and he now lives with Fern and Fern’s grandmother in her grandmother’s boardinghouse.

5.
ELIZA
—Fern’s mother. She was a great Anybody. She died while giving birth to Fern, but Fern still feels her mother’s presence strongly and often smells the scent of lilacs—Eliza’s favorite flower—pouring out of her mother’s old diary.

7.
THE ART OF BEING ANYBODY
BY OGLETHORP HENCEFORTHTOWITH
—a one-of-a-kind book that holds all the secrets of being an Anybody and that can only be read by the person who the book belongs to. The book belongs to Fern, but she has had to keep it out of the hands of two bad guys back-to-back: the Miser and
BORT
.

8.
FERN’S GRANDMOTHER’S BOARDINGHOUSE
—a house that exists in a world of books. It’s even constructed with books as the main building supply! The house is populated with creatures that have been shaken from books—Borrowers in the walls, hobbits in the yard, Indians in the cupboards. It’s situated where the sidewalk ends, beside a peach tree with the most enormous, one might say,
giant
peach.

9.
THE SOMEBODIES
—well, I can’t tell you who the Somebodies are, can I? That would ruin this book!

Okay, okay, enough dillydallying and lollygagging, not to mention dillylolling and dallygagging. Turn the page!

From my hidden perch,

Shymers by Jen Naumann
White Tiger (A Shifter's Unbound Novel) by Jennifer Ashley
Passenger by Ronald Malfi
Surprised by Love by Kate Hofman
Find It in Everything by Drew Barrymore
Losing Vietnam by Ira A. Hunt Jr.
Lauri Robinson by What a Cowboy Wants
Nest by Inga Simpson
Under the Skin by Michel Faber
Faster We Burn by Chelsea M. Cameron
Our partner