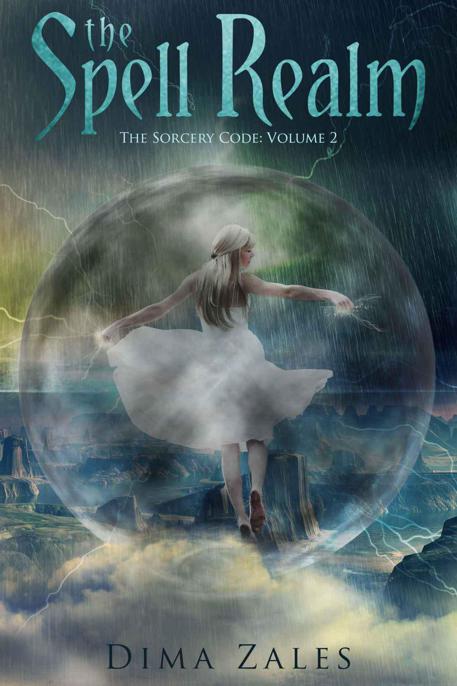 This is a work of fiction. Names, characters, places, and incidents are either the product of the author’s imagination or are used fictitiously, and any resemblance to actual persons, living or dead, business establishments, events, or locales is purely coincidental.

Except for use in a review, no part of this book may be reproduced, scanned, or distributed in any printed or electronic form without permission.

Published by Mozaika Publications, an imprint of Mozaika LLC.

The highly anticipated sequel to
The Sorcery Code
. . .

After the battle with the Sorcerer Guard, Gala and Blaise take shelter in the mountains, a place of unique beauty and danger. Augusta, however, is determined to exact revenge—even as Barson, her ambitious lover, implements his own plan. But amidst politics, battles, and intrigue, something far bigger is brewing . . . something that could disturb the balance of the Spell Realm itself.

The being stirred after what felt like millennia of peace and serenity. As it always did upon awakening, it examined itself.
I exist
, it determined, pulling its thoughts together with effort. Upon making that determination, it was flooded with ideas and a recognition that this state—lucidity—had happened to it before.

Who am I?
it wondered, realizing that it was not the first time the question occurred to it. Immediately, it knew the futility of trying to find an answer. There was no good concept to describe it to itself, no word to define it. However, some instinct provided a shortcut. Out of the vast storage of things it forgot, a label came, and with it, something that beings in the other place called
gender
. I am Dranel, he realized. The name and gender didn’t matter here, of course, but it made his sense of identity more concrete, helping him anchor his thoughts.

Putting aside matters of self, Dranel focused on what brought him out of his calm and blissfully thoughtless state. After some analysis, he determined that it was the same phenomenon that had awakened him before—the strange being that had made an impression on him.

This being was a mind that was purely artificial in nature. Dranel had been curious about it when it first appeared, but it had left the Spell Realm before he could understand it. It went into that other place, the one Dranel vaguely knew to be the Physical Realm.

It—
no, it was more proper to say ‘she’
—began as a set of patterns, like most intrusions from the Physical Realm. Those patterns were called spells, Dranel recalled. At the same time, he remembered that he preferred to think of them as algorithms. They usually contained instructions on how to bring about the effects that manifested in the other Realm, but here in his world, they were mere abstractions, a way to stimulate what passed for his senses.

Some of these algorithms had effects that were fleeting, while others, more recently observed, were more permanent in nature. But none of them were like
her
. She was the most unique pattern he had ever come across—an algorithm consisting of a network of sub-algorithms all joined together, combined in such a way that enabled them to learn and think. The end result was an intelligence unlike any he had ever encountered . . . and he had encountered many, both here and in that other place.

What was more amazing was that she’d learned to create algorithms of her own, algorithms that were beautiful to observe. Dranel recalled becoming lucid each time she’d created an algorithm—each time she’d cast a spell. He had even once felt her mind brushing against his while she was in that strange state known as ‘dreaming.’

If he was forced to become lucid again, he would use that opportunity to understand her better, Dranel decided, and let himself sink back into the blissful nothingness that was his preferred existence.

Waking up, Barson became aware of the curious lack of pain in his body. He was still wearing his armor—or what was left of it, at least. But he couldn’t feel any injuries—not from the battle and certainly not from his fall.

It had been a brutal, bloody fight—the first fight of his life that Barson had not won. After being struck by lightning, he’d lost his grip on the sorceress and plummeted to the ground below. He recalled the agony of shattered bones and broken flesh—and the amazing bliss that followed. He must’ve been healed, he realized, slowly getting up.

Looking around the field, Barson could see the other soldiers struggling to their feet in the pouring rain, their clothes covered in mud. His right-hand man, Larn, seemed to be fine, though he looked like he was waking up after an all-night drinking binge. Others, however, lay still, their bodies mangled and decapitated. They must’ve been beyond repair when the powerful healing magic hit, Barson thought, remembering the extent of his own injuries from the fall.

It was the blond girl who had done this—both the damage and the healing spell afterwards. Barson was sure of that. Whatever she was, she was no ordinary sorceress. Ganir must’ve known that when he sent the Guard to capture her.

And Augusta must’ve known as well, Barson realized. That’s why she had gone out of her way to give him protective spells—spells that had ultimately proven useless. He knew that his lover, unlike Ganir, had not intended him any harm, but Barson still felt a surge of anger at her. Augusta should’ve warned him about what they would face, should’ve made sure they knew the full strength of their opponent.

Turning toward the inn, he saw the girl with her strange entourage getting on a huge flying chaise. In addition to the two old women and the lions, there was a man with them—a man who looked vaguely familiar. Concentrating, Barson tried to remember where he’d seen the man before. And then it hit him: it was Blaise—the former Council member who had been Augusta’s fiancé.

The man whom she had gone to see shortly before the Guard had been sent on this disastrous mission.

Pieces of the puzzle began to come together for Barson. This strange sorceress was somehow connected to Blaise; that had to be why Augusta and Ganir had visited the reclusive sorcerer recently.

Frowning, Barson watched as the giant chaise rose into the air, gradually disappearing into the distance amidst the thick downpour. The situation with this sorceress was not something he had factored into his plans before, but maybe there was a way to use it to his advantage.

Maybe there was a way he could turn this defeat into victory.

As they flew toward the mountains, Blaise watched the heavy sheets of rain coming down. It was the strongest rain of the past two years, spreading far and wide over the land of Koldun and nurturing the dry earth below. Thanks to Gala, the drought appeared to be finally over.

Gala herself was sitting quietly, pressed against his side. Her slim body was shaking, and he knew she was reliving the horror of the battle. Putting his arm around her shoulders, Blaise pulled her closer, wanting to comfort her in any way he could.

“Gala,” he said quietly, “this is not your fault.”

She nodded, her expression still somber, and he knew that rationally, she understood that. However, logic and rationality had nothing to do with the emotions she was experiencing. Despite her incredible powers, his creation was just as vulnerable as a human when it came to the aftereffects of trauma.

On the other side of the enlarged chaise, Esther and Maya slept huddled together, exhausted by their recent ordeal. They were surrounded by a circle of lions. The animals were surprisingly well behaved, not even growling at each other. Blaise didn’t know what influence Gala had over them, but her very presence seemed to be calming them, making them unnaturally peaceful.

After they had been flying for a couple of hours, the rain began to ease, and Blaise could see the mountain peaks rising majestically in the distance. Gala’s mood seemed to improve slightly, too. She was now looking at the scenery below, and he could see that some of her customary zest for life was starting to return.

“That’s the Western Woods,” he said, seeing her peering at the green mass below. “The trees there are so thick, you can’t even see the ground. They say that inside, it’s as dark as night even in the brightest light of day.”

She looked up at him. “Really? Have you ever been in there before?”

“No.” Blaise shook his head. “Almost no one has. A few people have been to the outskirts of the forest, but nobody has been deep inside and lived to tell the tale.”

Her blue eyes widened. “Why? What’s in there?”

Blaise smiled at the interested look on her face. “The peasants have their legends and superstitions. Nobody knows for sure, though. The horses refuse to go into those woods—they smell something dangerous, I think.”

“Oh? What could they be smelling?”

Blaise grinned. “Yes. But, of course, it’s just a superstition. It’s more likely that the horses are reacting to some tangible danger. Some sorcerers suspect that there might be poisonous plants and insects in those woods. Maybe some wild animals, too.”

“That makes more sense, I think,” Gala said slowly. “Is that why so few people go to the mountains? Because it’s so difficult to get there through these woods?”

“Yes, exactly. I was shocked to hear that anyone made it there. Not only are there forests and swamplands all around the outer edges of Koldun, but also the storms sometimes cross the mountains, making travel in these parts quite perilous. Of course, now that we have the flying chaise, it’s much easier.” Blaise frowned, thinking about it. “In fact, I’m surprised there hasn’t been more exploration in the last couple of years.”

The mountains that surrounded their land had long been considered both a blessing and a curse. They shielded the interior of Koldun from the violent ocean storms, but they also prevented anyone from venturing beyond their tall, impenetrable peaks. Blaise had always thought that there had to be other lands out there, beyond the ocean, but nobody had ever been able to prove that.

Gala nodded absentmindedly, her eyes trained on the distant mountain peaks. “How soon do you think we’ll get there?” she asked. “I want to see the mountains up close—they look so beautiful.” Her tense posture belied her casual words, however, and Blaise realized that it wasn’t only her natural curiosity that was motivating her desire to get to the mountains. She also needed a fresh start, a place far away from the terrible events of the day.

“I’ll write a spell to get us there faster,” he said, reaching for his bag. He still had some partially finished spell cards left over from his earlier efforts to reach Gala, and it didn’t take him long to come up with a spell that would shorten their travel time by a couple of tele-jumps.

Taking out his Interpreter Stone, he put the first card into the slot. A second later, they were a few miles ahead.

“I like it when you do magic,” Gala said, looking up at him. “It’s so precise and controlled.”