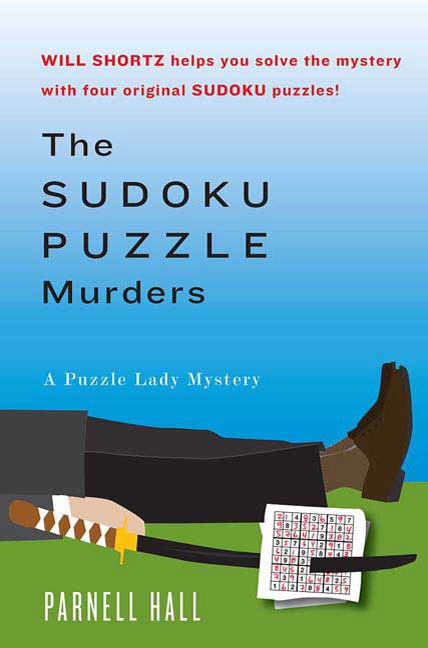 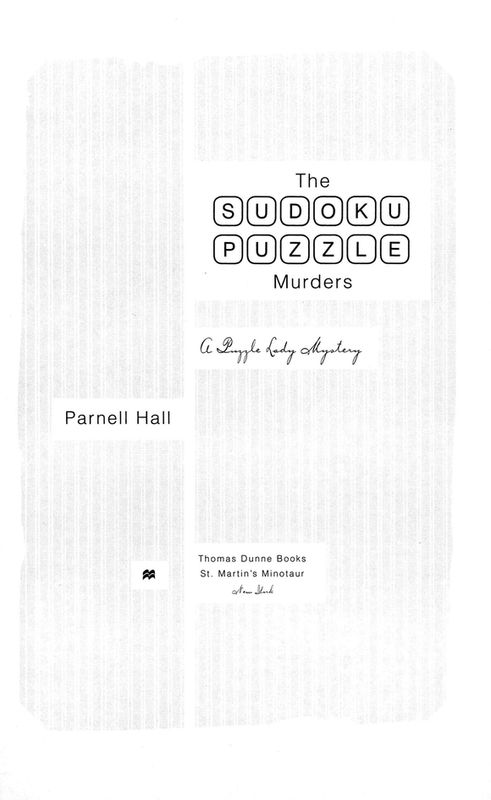 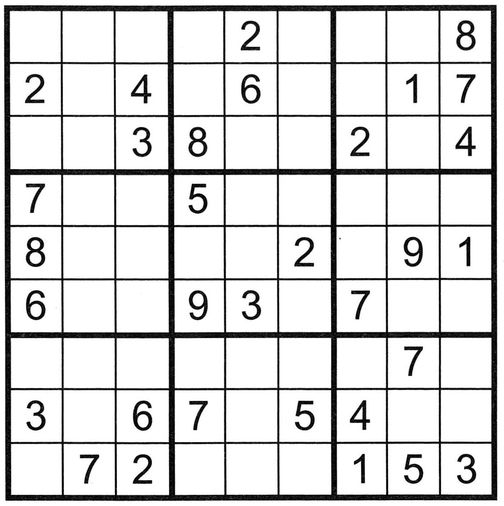 “Look at the three-by-three square in the upper left hand corner. There’s a two, a three, and a four in that square. See if you can figure out where to put a seven.”
Several hands went up. Someone yelled, “Above the four.”
Cora smiled. “I see most of you already know. That’s right, a seven goes in the box in the first row across and the third column down. And why does it go there? It can’t go in the first column, because there’s a seven in the fourth row of that column, and you can’t have two sevens in the same column. And it can’t go in the second column, because there’s a seven in the ninth row of that column. So it must be in the third column. The box in the second row of that column is already filled with a four. The box in the third row is already
filled with a three. So the only place it can go is the box in the first row of the third column.”
Cora curtsied and gestured in the direction of the person who shouted. “Which is the box above the four.
“Using the same sort of logic, we can figure out where the rest of the numbers go.”
Cora quickly filled in the rest of the puzzle. She flashed her trademark Puzzle Lady smile. “And that,” she said, “is how you solve a sudoku.” 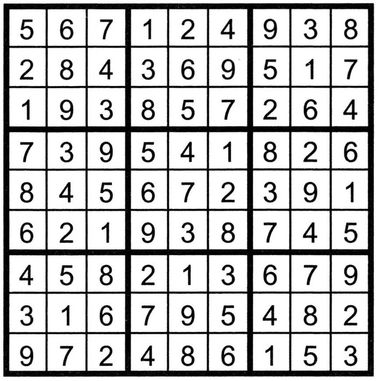 Harvey Beerbaum pushed his way forward. The portly cruciverbalist took the microphone from Cora, flashed her a sly smile. “That’s all well and good, Miss Felton. But, as you point out, that’s an easy puzzle. Not very challenging to solve. Wouldn’t you like to try something harder?”
Cora looked Harvey up and down, rolled her eyes at the audience. “Write your own punch line, gang. I’m afraid to touch that one.”
Harvey frowned at the laughter, then blushed furiously. “I mean a more difficult puzzle. A tougher sudoku. A diabolical one.”
“That sounds scary, Harvey. I’m not sure these people are up for that.”
“What do you think, ladies and gentlemen?” Harvey said. “Wouldn’t you like to see the Puzzle Lady solve a diabolical sudoku?”
The audience applauded.
“Me?” Cora said. “What do you mean, me? You’re the one who suggested it. If anyone’s gonna solve it, it ought to be you.”
Another round of applause greeted that challenge.
“I will if you will,” Harvey said.
Cora blinked. “Huh?”
“Why don’t we both solve it? At the same time. In front of everybody. And see who finishes first?”
Becky nudged Aaron. “Is this part of the program?”
“No way.”
“You think Cora can take him?”
Aaron’s smile was forced. Becky didn’t know Sherry was the Puzzle Lady. Without Sherry, Cora couldn’t take him at all.
For the moment, however, Cora was tap dancing bravely. “I wouldn’t want to show you up, Harvey,” she declared, with a twinkle in her eye.
The townspeople hooted and applauded.
“Oh, I’m not worried,” Harvey said. “I’ve gotten pretty good at these little number things.”
“He’s calling them ‘little number things’ for effect,” Cora said. “He actually knows they’re sudoku. That is how you pronounce it, isn’t it, Harvey?”
“You pronounce it very well,” Harvey said. “But how fast can you
solve
it?”
“Why? You got an appointment?”
“I actually plan to be here,” Harvey said, “for the next twenty minutes or so. Which is as long as it should take me to complete the diabolical puzzle. I don’t know about you.”
“Ladies and gentlemen,” Cora declared, “this is the ultimate of chutzpah. The guy constructs a puzzle, then offers to solve it.”
“I assure you I’ve done nothing of the kind,” Harvey said. “I can’t believe you’d accuse me of such a thing. I’m suggesting you solve a puzzle constructed by someone else.”
“Some friend of yours?” Cora said. “I’m supposed to trust that you haven’t had a peek?”
Cora was having a good time ribbing Harvey. There was no reason in the world why she had to accept his outrageous challenge. If she wanted, she could leave him up onstage solving his own damn diabolical puzzle.
“Oh, I think you’ll find the constructor’s credentials unimpeachable.” Harvey pulled an envelope from his pocket, and took out a letter. He opened it and read, “Dear Harvey. Sorry I couldn’t be there in person to help with your charity drive. Please allow me to donate this sudoku. I hope you and the Puzzle Lady have fun solving it.”
Harvey looked up from the letter and smiled. “Sincerely, Will Shortz!”

Dallas Nights by Em Petrova
Tennessee Williams: Mad Pilgrimage of the Flesh by John Lahr
Lost and Found by Megan Fields
Lakeshore Secrets: The McAdams Sisters - Kate McAdams (By The Lake Series Book 1) by Leah, Shannyn
Love Letters: A Rose Harbor Novel by Debbie Macomber
The Ghost Runner by Parker Bilal
Chris by Randy Salem
Megan Frampton by Baring It All
Bought and Trained by Emily Tilton
Jig by Campbell Armstrong
Our partner