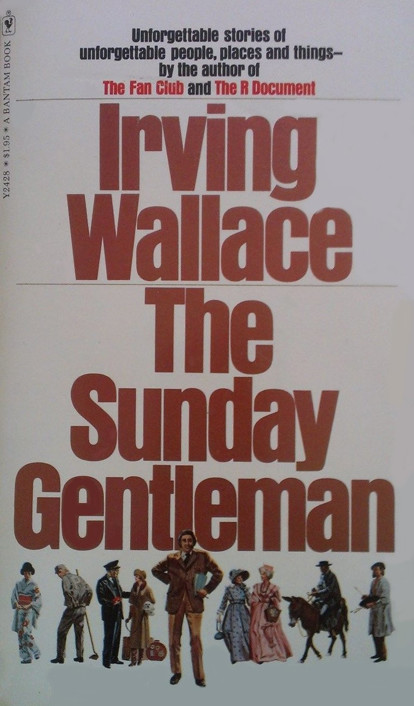 A young California priest assigned to shadow a man dead for 150 years—to test his worthiness for sainthood.

The world’s most dangerous, exciting and glamorous train—the Orient Express.

The proprietors of the world’s most sinful, celebrated brothel—so luxurious that the spittoons were made of solid gold.

The most successful detective on earth, who could see a murder in a speck of dust—which he found more rewarding than a dozen eyewitnesses.

man of the world.

The bestselling author takes you on a tour of fascinating people and remarkable places and things—from the Japanese head of the Geisha union to the French Sherlock Holmes, from the German munitions king to the queens of the American bordello.

The publishers listed below gave their permission for me to reprint those of my articles which originally appeared in the pages of their publications in abridged form, as well as permission to reprint those articles of mine that they owned but had not published. I have listed the titles of the articles as they were used in their magazine publication. Where these original titles have been changed for this book, I have placed my new titles in parentheses.

who helped to make

THE SUNDAY GENTLEMAN AT HOME

THE SUNDAY GENTLEMAN ON MONDAY

The Biggest, the Best,

In the summer of 1962, when I decided to collect and enlarge the stories composing this book, I wondered what title I might give to the result. At once, a favorite little anecdote that I had heard about the great actor and wit John Barrymore came to mind. A friend of the actor’s, long ailing, had finally died, and Barrymore had reluctantly attended the funeral. Barrymore had stood apart from the deceased’s other cronies and had observed the burial ceremony in the cemetery with a jaundiced eye. When the service was ended and the mourners had begun to depart, Barrymore noticed that one remained behind, a doddering old man who stood near the grave, staring down into it. Barrymore considered the old man, then slowly sidled up to him, leaned over and whispered, “I guess it hardly pays to go home.”

Since the book I had in mind was meant to be, in a sense, a valedictory to my magazine-writing career, a fond and nostalgic farewell to another time, when writers could write about subjects while not living under the cloud of Russian-American nuclear oblivion, I thought that I might call my book “It Hardly Pays to Go Home,” adding the explanatory subtitle, “One Last Look at Some Strange People, Places and Things Around the World Before the Deluge.”

But when I began to work on this book, I soon realized the title that had first come to mind would never do. For the oddities and the curiosities, human and institutional, that I had observed and investigated in a span of twenty years were, for the most part, not of another era but still of our time, and as alive as I was. Clearly, nostalgia and farewell were not the right notes. And then, happily, I realized what the right note was, a note less grand, less pessimistic, more personal—and I named this book
The Sunday Gentleman
.

Under the severe criminal laws of seventeenth-century England, a man in debt was liable to arrest and trial. If found guilty, and if his creditors demanded that he be incarcerated in debtor’s prison for his insolvency and financial default, he could be taken into custody by the police any day of the week save one—Sunday, the Lord’s Day.

As a consequence, a man wanted for debt would usually go into hiding six days of the week—but on Sunday, immune from seizure, he would appear proudly in public as safe as any solvent gentleman. He was free to breathe the free air, to mingle in the streets and alehouses with his fellows as their equal, suffering no threat from the Throne or fear of being flung into Newgate.

There were many such Sunday Gentlemen, as they came to be called, in that period, and among the foremost of these was Daniel Defoe, the pioneer newspaperman and pamphleteer, and the author of
The Life and Strange Surprizing Adventures of Robinson Crusoe, of York, Mariner
. In 1692, when his hosiery trading company was £17,000 in debt and on the verge of bankruptcy, Daniel Defoe was forced to hide from the law six days a week in a section of Bristol, emerging in public only on Sunday, to be again his own man and to stroll with dignity “accoutred in the fashion of the times, with a flowing wig, lace ruffles, and a sword by his side.” This role of one-seventh gentleman was maintained until his creditors were satisfied, and then, and only then, could he be his own man and the compleat gentleman every day of the week.

During my own twenty-year career as a free-lance contributor to national magazines in the United States and Great Britain, that long apprenticeship before I could become a full-time writer of books, I too was, in a symbolic sense, such a Sunday Gentleman as Defoe had been. I would, in those lively and trying years, develop and write formula articles and stories to the best of my ability during six days of each week, to escape our modern version of debtor’s prison.

I would write, in that time, short nonfiction pieces skillfully created to fill in the blank spaces between advertisements in popular periodicals, to enlighten busy and harried Everyman superficially, and to earn money for my keep and the support of my dependents. The hours were long and the pay short and uncertain. For my first published article, sold when I was fifteen years old, I received five dollars. For one of my last, when I was thirty-five, I received three thousand dollars. That was the high and the low of it, although the real low was when I received nothing at all for my speculative efforts. I recall even now, with a stab of pain that has never quite disappeared, a Wisconsin morning when I was seventeen or eighteen years old and went out to the mailbox to find in one delivery twenty manuscripts of mine that had been rejected by twenty magazines.

When I was very young, I would study various periodicals, try to determine the kind of subjects that seemed to interest them, and then dream up suitable stories—researching, organizing, and submitting the stories directly to the publications that were my targets. As many of my stories sold as did not sell, and I was sufficiently encouraged by the small payments I received, by the appearance of my name in print, by the variety of knowledge I acquired through my firsthand interviews and researches, to go doggedly on and on. In this way, I earned spending money when I was a high school student in Kenosha, Wisconsin; I supported myself in an attic room when I attended college in Berkeley, California; I managed to survive in a dingy hotel room in Los Angeles; and along the way paid for a nine-month trip of writing and exploration through Mexico, Guatemala, Honduras, Panama, Colombia, and Cuba.

Later, with more knowledge, experience, and a growing and soon obsessive desire to write well, I produced less, but struggled no less steadily, and I wrote my magazine stories with more depth of research and more care in their creation. As the important magazines began to buy and publish my articles, I changed some of my methods, but only the mechanics, not the principles behind them. Where formerly, I had submitted my articles directly to editors—which was young, unprofessional, and slow, and placed me at the mercy of their autocratic decisions on what I should be paid and what I should rewrite—I now had sufficient stature to acquire a New York literary agent. He became my retailer, my middleman in the marketplace. Where I used to write an article simply because I felt it was suitable for a certain market, upon my agent’s advice I began to submit one- or two-page outlines of story ideas before researching and writing them. In the end, this extra step, the outlining of an idea, proved economical. It saved me days and weeks of time and energy that would have been wasted if I had written about subjects that the magazines had already published or had taboos against, or in which they were not interested.

Only when a periodical approved an outline I had submitted did I then research and write it. But even this new approach did not guarantee me a sale and an income. If the article did not live up to the promise of the outline, it was returned and I received no payment for my work. Not until the last seven or eight years of my magazine-writing career, when I had achieved a modest reputation and was being published by
The Saturday Evening Post, Reader’s Digest,
Collier’s
, Esquire, Cosmopolitan
, did I receive guarantees of payment for approved outlines. Several magazines would promise full payment, whether the article I produced was accepted for publication or not. Most magazines would promise full payment if the article was accepted, but perhaps only one-fourth payment if the article was rejected, with travel expenses in connection with research guaranteed in either case.

At the peak of my magazine-writing career, nine out of ten stories that I researched and wrote six days of the week—more for my livelihood than my pleasure, although I cannot remember ever writing a single article that did not give me some pleasure—were based on ideas I had created, and then slanted to suit the editorial peculiarities and special reading public of specific magazines. In short, I was inventing ideas which were tailor-made for a specific periodical, ideas that might have been exactly what its editors would have thought of and desired had they been inventive enough to do so.

One out of ten story ideas would come directly to me from the editors of a magazine, an assignment devised by them and one that they felt was suitable for my talents. For example,
Collier’s
magazine decided, in 1946, that it would like a series of three stories on Princess Elizabeth, now Queen of England, and asked me if I would undertake the assignment. I went from Paris to Buckingham Palace to research and write the stories. On the other hand, in that same period, I suspected that
Collier’s
magazine would be interested in an up-to-date article on the French Foreign Legion, an article showing that ex-Nazi Germans then dominated the French Legion’s rank and file. When I suggested this idea,
Collier’s
approved it with as much enthusiasm as if they had conceived the idea in their own Manhattan offices.

The point I am making is this: No matter how I obtained my assignments, the stories that I wrote six days a week were stories designed to sell to certain markets, to be published, and to earn me enough money to avoid poverty, bankruptcy, masculine failure, the twentieth-century versions of the seventeenth-century debtor’s prison. Nor did I ever feel that this was literary prostitution, any more than magazine writers, newspapermen, television and radio writers and commentators today feel that they are committing prostitution. It was a respectable job to be done, just as magazine writers and journalists today are fulfilling a job in communications. It was an accommodation to a mature necessity of life, a way to survive and seek security for one’s self and one’s dependents. I still remember the legend on a glass paperweight, an insurance company gift, that my father used to have on his desk when I was a boy. It read: “The world owes no man a living.” And so those of us who wrote on order did so because it was man’s work, and we tried—as others in this position try today—to earn our daily bread with as much honor, integrity, and individual creativity as possible within the confines of the restrictive commercial world of magazines and newspapers.