Read The Sword And The Olive Online

The Sword And The Olive 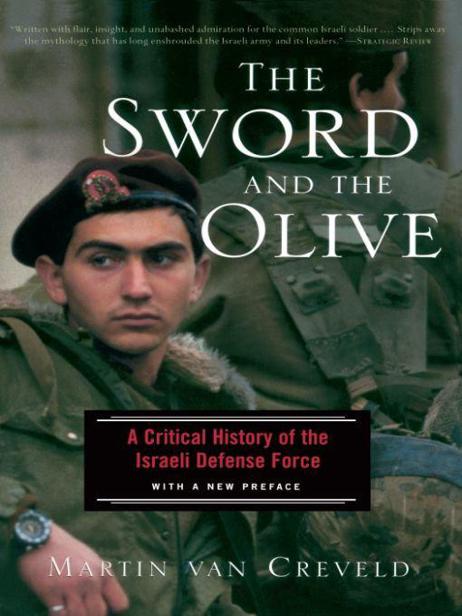 Table of Contents
Title Page
Dedication
NOTE ON SOURCES, TRANSLATIONS, TRANSLITERATIONS, AND ACRONYMS
GLOSSARY OF ACRONYMS AND HEBREW TERMS USED IN THE TEXT
PREFACE TO THE PAPERBACK EDITION
Introduction
THE SWORD AND THE OLIVE
I - THE SURGE, 1907-1949
CHAPTER 1 - “BATTLE-WORTHY GUARDS”
CHAPTER 2 - FOUNDING HAGANA
CHAPTER 3 - “BEYOND THE FENCE”
CHAPTER 4 - TOWARD STATEHOOD
CHAPTER 5 - AT WAR FOR INDEPENDENCE
CHAPTER 6 - REPELLING INVASION
CHAPTER 7 - THE ACHIEVEMENT AND THE PRICE
II - THE YEARS OF GREATNESS, 1949-1973
CHAPTER 8 - THE ARMY OF THE STATE
CHAPTER 9 - TRIALS BY FIRE
CHAPTER 10 - BUILDING A MODERN ARMY
CHAPTER 11 - THE APOGEE OF BLITZKRIEG
CHAPTER 12 - AT BAY
CHAPTER 13 - OCTOBER EARTHQUAKE
CHAPTER 14 - THE RECKONING
III - RUNNING OUT OF STEAM, 1974-1997
CHAPTER 15 - RECOVERY AND EXPANSION
CHAPTER 16 - GRENADES INTO MUSHROOM CLOUDS
CHAPTER 17 - “THE LEBANESE MORASS”
CHAPTER 18 - AN INDIAN SUMMER
CHAPTER 19 - IMPOTENT AT THE GULF
CHAPTER 20 - COPING WITH Intifada
CHAPTER 21 - THE BETRAYAL OF FAITH
THE GOOD AND THE EVIL
NOTES
INDEX
ABOUT THE AUTHOR
Copyright Page
ALSO BY MARTIN VAN CREVELD
Men, Women and War
The Art of War: War and Military Thought
The Rise and Decline of the State
Airpower and Maneuver Warfare
Nuclear Proliferation and the Future of Conflict
The Transformation of War
The Training of Officers: From Military Professionalism to Irrelevance
Technology and War: From 2000 B.C. to the Present
Command in War
Fighting Power: German and U.S. Army Performance, 1939-1945
Supplying War: Logistics from Wallenstein to Patton
Hitler’s Strategy, 1940-41: The Balkan Clue 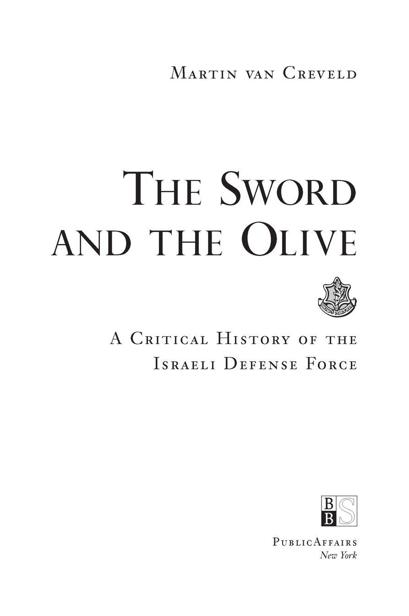 In memory of Miki Levanon (1971-1992),
who died by friendly fire.
NOTE ON SOURCES, TRANSLATIONS, TRANSLITERATIONS, AND ACRONYMS
AS NECESSARILY follows from the nature of the subject, the great majority of sources used in this study are in Hebrew. Some of them, notably the memoirs of such famous personalities as Moshe Dayan, Yitschak Rabin, and Ariel Sharon, have been translated into English. Nevertheless I have normally made use of, and referred to, the Hebrew originals—the reason being that they are often much more detailed and contain important documentary material that has been omitted from the English editions. To give the non-Israeli reader at least an idea of the nature of the source in question I have quoted each Hebrew title and provided it with a translation. Those translations are my own and by no means always correspond to the “official” English titles that are carried on the front pages and that all too often sacrifice accuracy for literary effect. It is my hope that this system will enable the non-Israeli reader, if not to check on my facts, then at least to obtain some kind of feel for the sources that I have used.
As foreigners driving around Israel and trying to read the road signs will note, transliteration represents a problem; occasionally it seems there are as many transliterations as there are people, if not more. I tried to be as simple, consistent, and phonetically correct as I could, even if this meant ignoring the normal system (e.g.,
kibbuts
instead of “kibbutz,” Chayim instead of Haim) and substituting one of my own.
Finally, and for consistency’s sake, I have treated Hebrew acronyms as I would English ones: for example, in writing TSAHAL (for Tsva-Hagana Leyisrael) rather than the more normal Tsahal (let alone Zahal, which does not correspond to the way in which the word is pronounced); and PALMACH (for Plugot Machats) rather than Palmach. The reason for this is to make the informed reader, who may well have heard these terms before, aware that they
do
in fact represent acronyms. And indeed acronyms are something that the Israeli armed forces, like their opposite numbers in other countries, have been spouting forth in prodigious numbers.
Still there is no denying that, for all but Hebrew-speakers, access both to the numerous Hebrew terms and to the sources remains difficult if not impossible. Therefore, as in any good restaurant, please feel free to ignore the kitchen and enjoy the meal.
GLOSSARY OF ACRONYMS AND HEBREW TERMS USED IN THE TEXT
Achdut Ha-avoda
Unity of Labor; a left-wing activist party led by Yisrael Galili and Yigal Allon
AEW
airborne electronic warfare
AFV
armored fighting vehicle
aluf, alufim
(pl.)
brigadier (later major) general
APC
armored personnel carrier
APSDFS
armor-piercing, sabbot-discarding, fin-stabilized ammunition
BAKUM (Basis Klita U-miyun)
Recruit Absorption and Classification Base
Bar Giora
first Jewish self-defense organization in Palestine (1907)
Betar
right-wing nationalist organization founded in 1925
chalutsim
pioneers
chared, charedim
(pl.)
“the anxious ones”; non-Zionist orthodox Jews
chatatsit
gravel thrower; a contraption dreamed up by TAAS for combating Palestinian demonstrators
CHEN (Chel Nashim)
Women’s Army Corps
Cherut
Freedom; a right-wing political party, the ancestor of the modern Likud Party
Chets
Arrow: (1) type of elongated, armor-piercing ammunition developed for the Merkava tank; (2) antiballistic missile developed by IAI
CHIM (Chel Mishmar)
Garrison Force; Hagana’s stationary force
CHISH (Chel Sadeh)
Field Force; one of Hagana’s strike forces
Chok Sherut Bitachon
National Service Law of 1949
CIC
commander in chief
CO
comanding officer
COS
chief of staff
dunam
a parcel of land measuring 1,000 square meters
en brera
“no choice”; the ideological justification for Israeli wars until 1973
ECM
electronic countermeasures
ETSEL (Irgun Tsvai Leumi)
National Military Organization; pre-1948 right-wing terrorist organization
fashla, fashlot
(pl.)
slang for “blunder”
FLIR
forward-looking infrared; a night-vision system for aircraft and helicopters
FOSH (Plugot Sadeh)
Field Companies; organized by Hagana in 1937-1938
GADNA (Gdudei Noar)
Youth Battalions; a paramilitary organization for youths run by the IDF
gafir, gafirim
(pl.)
Jewish police officer working for the British authorities
Galil
Israeli-made assault rifle
garin, garinim
(pl.)
“cores” of NACHAL youths earmarked for new settlements
gesher ha-glilim
roller bridge used in the 1973 October War to cross the Suez Canal
GHQ
general headquarters
Gush Emunim
Bloc of the Faith; a group of extreme right-wing nationalist Jews in the Occupied Territories
hachshara, hachsharot
(pl.)
PALMACH training group
HAGA (Hagana Ezrachit)
Civil Defense Organization
Hagana
Defense; the Jewish self-defense force in Palestine before 1948
hagana merchavit
territorial defense
Ha-shomer
The Guard; the second Jewish self-defense organization in Palestine after Bar Giora
Histadrut
Labor Federation
IAF
Israel Air Force
IAI
Israel Aircraft Industries
IDF
Israeli Defense Force
KABA (Kvutsat-echut)
Quality Group; a system of classifying recruits by quality
KABAN, KABANIM
(pl.)
(ktsin beriut nefesh)
mental health officer
Kfir
Lion Cub; the Israeli-built light fighter-bomber
kibbuts, kibbutsim
(pl.)
communal settlement where all property is held in common
kippot sruggot
literally, “knitted yarmulkes”; the nickname for right-wing nationalist orthodox Jews
Knesset
the Israeli parliament

Hunted by Capri Montgomery
Ember by Tess Williams
A Twist in the Tale (2011) by Comley, Mel
334 by Thomas M. Disch
The History Mystery by Ana Maria Machado
Strawberry Summer by Cynthia Blair
Sleight Of Hand by Kate Kelly
Second Chance by James, Sian
Saigon by Anthony Grey
Loving and Loathing Vegas by Lex Chase
Our partner