Read The Taste of Words: An Introduction to Urdu Poetry Online

The Taste of Words: An Introduction to Urdu Poetry 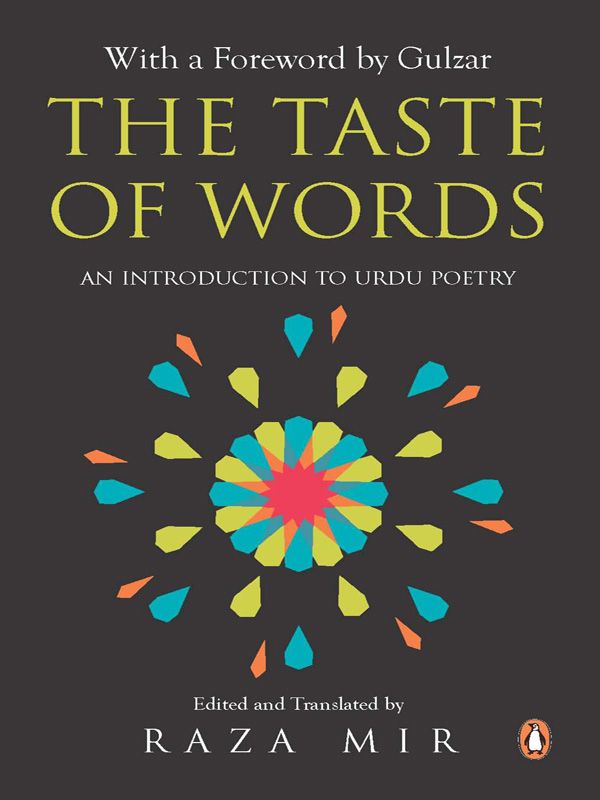 A Note on Poetic Form

THE TASTE OF WORDS

Raza Mir teaches management at William Paterson University, USA. He is the co-author of
Anthems of Resistance: A Celebration of Progressive Urdu Poetry
. He can be reached at
[email protected]
.

Urdu is a nation unto itself. Wherever it travels, it creates its own world. It was born in India, but does not belong to India alone. It is the official language of Pakistan, but does not belong to Pakistan alone. When it reached Oslo (Norway), it settled there. It went to Great Britain, and created its own home. It reached Canada, and a community emerged. It reached the United States, and became a native tongue. For it was embraced by Raza Mir.

The truth is that instead of ‘embraced’, if we could use a different metaphor, we would say ‘adopted by lips’. Wherever Urdu goes, it clasps people in a bear hug. It becomes a tradition unto itself. For Urdu is after all, the lingua franca of a culture.

What is this love of Urdu

That the taste of words dissolves on the tongue

Like expensive tobacco dissolves with a bite of paan?

Like the many flavours of a delectable morsel of betel

That frolic in the mouth.

When Urdu touches the throat

A strange aristocracy it possesses

That, even in penury, Urdu yields a sense of immense

Though, at times, there is a paucity of meaning

And a surfeit of words,

When declaimed in a firm voice, words appear

When Urdu reaches the ears from a distance

As if on winter days, the window is open and

sunshine is pouring in.

Strange is this Urdu tongue

That, when on a journey,

Should a wayfarer declaim a couplet from Mir, from

Be that a complete stranger

He still appears a compatriot.

Does it not feel

That the lingua franca of a culture is this Urdu!

Janaab Raza Mir, I will remember your role in Urdu.
1

This is first and foremost a gift for my wife Farah. It was she who laid out the idea of this book for me in detail, as a volume that would not only help her dip her toe in the vast ocean that constituted Urdu poetry, but also provide her with an entry point into the language itself, with its occasionally intimidating metaphors and linguistic peculiarities.

Like Farah, I know a lot of people whose interest in Urdu poetry vastly exceeds their ability to engage with it, partly because of their unfamiliarity with the script, but also because of its often mystifying and outsider-unfriendly albeit tantalizing metaphorical conventions. Indeed, I am one of them. In school, I formally studied Hindi and Telugu, and despite Urdu being my putative mother tongue, I never engaged with it (except orally) till I was in my teens. It is only my unhealthy obsession with Urdu poetry that finally forced me to teach myself the Urdu script, and resolve the helplessness I felt when the joy of hearing a good poem was rendered ephemeral by my illiteracy. While my ineptitude with regard to Urdu poetry has been happily resolved, it obviously persists in other theatres—such as when I attend a Carnatic music concert, and watch the cognoscenti among the listeners keep beat with their palms and speak of kritis and adi-taalam, while all I can say is ‘That sounded nice!’ I would also love to read a good book on relatively alien cultural traditions, albeit one that is not too dense and impenetrable, with lines like: ‘One
margam
of Bharatanatyam consists of
allaripu
,
jatiswaram
,
sabdam
,
varnam
and
tillana
.’ I hope I will not bamboozle you in this book with unexplained references to
radif
,
qafiya
,
musaddas
or such technicalities. This book seeks to enhance your affective enjoyment of Urdu poetry, with as little interference from me as possible.

The intended readership of this book does not necessarily comprise Urdu experts or those who have read a lot of Urdu poetry in the original. Rather, I visualize an intelligent reader who, while interested in poetry as a genre, may not have a working knowledge of the Urdu script, and may not even be familiar with or fluent in Devanagri either. They would have read poetry in English and other languages to varying extents, but their exposure to Urdu might primarily be oral (Indian film songs, CDs of ghazals and poetry, the company of Urdu-literate friends). They do enjoy the spoken cadence of the language, but might have been deprived of the non-trivial pleasure that comes from a reflective reading of the poems.

In this anthology, I have attempted to provide an entry point to Urdu poetry for such interested non-insiders. To these readers, I offer a quasi-formal introduction to the canon and the contemporary landscape of Urdu poetry, with a highly arbitrary and subjective selection of around 150 poems from approximately fifty poets. Many of these poems have been abridged due to space considerations. I begin with a brief historical essay on Urdu and Urdu poetry (which is quirky, idiosyncratic, contingent and incomplete, but hopefully interesting) before laying out my selection of poems. I am also happy to offer a brief Internet roadmap of websites where one can read more about the poets and find more translated work. I have also identified websites in the public domain where these poems can be heard and viewed as performance. I have included biographical notes on the poets, which are not meant to be exhaustive, but just an attempt to render them human enough. The poets are ordered chronologically; and while I have chosen the list with care, there will obviously be omissions, of poems and poets, that some readers will consider unforgivable. If reviewers of this book express anger over the fact that I overlooked certain poets, poems or verses (or was foolish enough to include some ‘lightweight’ in this august company), I will be delighted. For in my wilder dreams, I envisage a series of sequel anthologies, like a good B-grade Hollywood horror film franchise, which people will disparage, but will be drawn to, as if to unhealthy street food. So do drum up the outrage. I briefly considered ignoring Ghalib in my selection to ensure such a backlash, but there is a line between quirkiness and insanity that even I am aware of!

I would also like to eschew any claims of genre-originality. This task of popularizing Urdu among its script-challenged enthusiasts is not new. As I have mentioned, I myself grew up without learning the Urdu script formally, and am indebted to a host of teachers.
1

In this collection, I have tried to accomplish three inter-related tasks. First, readers can use this volume as a rudimentary dictionary, a source of learning Urdu, or a way of engaging more organically and contextually with the words in a poem. The Internet roadmap adds greater charm to the experience: for example, it is fun to read Amir Khusrau’s thirteenth-century
qawwali
(for instance, ‘
Chhap tilak sab cheeni re . . .
’
) in translation, but the charm is infinitely multiplied if one can do so while listening to it being belted out by Abida Parveen!

The second task that I have set myself is that of translating in an idiom that is accessible to a relatively heterogeneous readership. It is here that I have had to make some difficult choices. Should one translate poetry as rhyme to reflect its potential ‘singability’ (and risk it degenerating occasionally into doggerel)? Or should one strive to preserve the verbal integrity of the poem and eschew rhyme and metre, in the hope that readers will understand the underlying poetics by themselves? Not only did I mentally agonize over this question, I actually wrote the entire first draft of this book as free verse, before deciding impulsively that, sometimes, ‘not to rhyme, was a cryme’ (indulge my puns, please!). Thus I chose to retranslate several—but by no means all—poems rhythmically. Even when I have tried my hand at rhyme, I have done my best to not inject myself, the translator, into the relationship between the poet and the reader. You will be the final arbiter of whether my choice has worked out.

I also want to raise the tricky issue of the transliteration scheme to be adopted. A number of formats have been proposed by academics dealing with Urdu, many of them highly precise and consistent. However, they tend to be themselves very arcane and intimidating to the eye. To maintain the popular flavour of the book, I have deliberately chosen to go with an unscientific, ‘vernacular’ format. My schema (if I may call it one) is derived from the way in which Hindustani words have been portrayed in movie posters in India over the years. For instance, a standard transliteration scheme deployed by the
Annual of Urdu Studies
, a respected journal, would represent a line from a song in the film
Hum Dono
as: ‘
Har fikr k
ō
dhû
ē
N m
ē
N ur
ā
d
ā
ĉ
al
ā
gay
ā
’. I would have instead gone in this book with: ‘
Har fikr ko dhuen mein udaata chalaa gayaa
’. Readers from the subcontinent, who are in the habit of reading transliterated movie posters and advertisements, will be familiar with this format. I beg the indulgence of others, on the plea that those who are finicky about transliteration are usually familiar with the original script, and can therefore make do with the originals.

I would like to acknowledge gratefully the following for giving me permission to reproduce some of the poems in this book. Gulzar, Javed Akhtar, Jameela Nishat, Ishrat Afreen, Fahmida Riaz, Iftikhar Arif, Asif Raza and S.M. Shahed permitted me to use their own work. In addition, I obtained permission from Fariha and Sambreen Rashed (for N.M. Rashid’s poem); Saba Zaidi (for Mustafa Zaidi’s poems); Tamkeen Khateeb (for Sulaiman Khateeb’s poem); Shabana Azmi (for Kaifi Azmi’s poems); Javed Akhtar (for Jan Nisar Akhtar’s and Majaz’s poems); Ali Nazim Jafri (for Ali Sardar Jafri’s poems); Faridoon Shahryar (for Shahryar’s poems); Ali Madeeh Hashmi and the Faiz Foundation (for Faiz’s poems); Syed Abid Raza (for Zeeshan Sahil’s poems); Parveen Qadir Agha, the Perveen Shakir Trust and Murad Publications (for Parveen Shakir’s poem); Shibli and Saadi Faraz (for Ahmed Faraz’s poems); and Andalib Sultanpuri (for Majrooh’s poems). While every possible effort was made to contact the heirs of deceased poets, I would be happy to include and acknowledge the heirs of any missed poets in future editions.

Finally, this book is an attempt to build another tiny bridge between the modern subcontinent and a language that is currently under siege on a variety of fronts. In the recent past, Urdu has struggled to gain acceptance from elitist rulers, dismissive linguists and political conservatives who have either sought to belittle it as a crude indistinct dialect or tainted it by association with putatively traitorous minorities. What has led to its survival in the South Asian landscape is the fact that it was embraced by the masses, and has remained alive as a spoken tongue. Perhaps reflecting this public-oriented ethos, its literary tradition, especially its poetic tradition, is simultaneously erudite and accessible, with a rhythm that can be intoned by a theologian and also sung by a street beggar. From culturally mobile ambiguities in words like
sanam
(simultaneously meaning ‘beloved’ and ‘stone’) to geographically ubiquitous slogans like ‘
Inquilab Zindabad
’ (‘Long Live the Revolution’), Urdu is a part of the lived experience of the Indian subcontinent, even among those who seek to deny and denigrate it. This book is my attempt to keep the language alive among its westernized friends as well. I hope you like it.