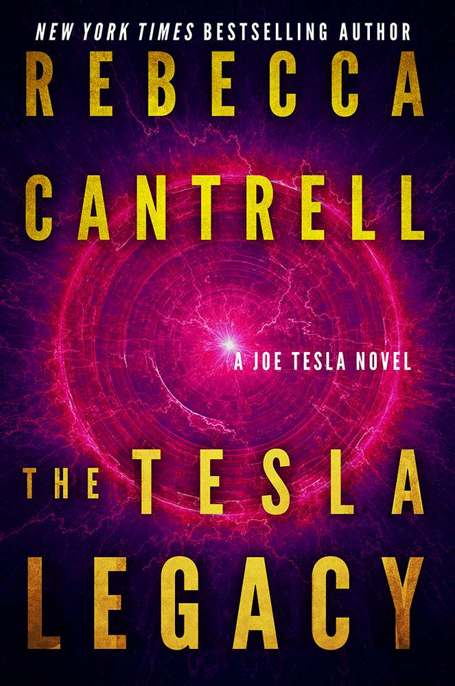 This book is a work of fiction. All of the characters, organizations, and events portrayed in this novel are either products of the author’s imagination or used fictitiously. Any similarity to any real person, alive or dead, is completely coincidental.

For my husband, my son, and all the other Nikola Tesla fans, and most especially Karen, the snotty actress.

Most men would not care about a simple pigeon, but Nikola Tesla was not most men. And so, when the pigeon found him in the vastness of the city, he recognized her as his own. Each dawn, her white wings cut through the cold air of New York and carried her over the bustle of horses and men to his windowsill. In the many months he had known her, she had come to trust him enough to feed from his palm, her cold beak tapping against his skin.

On this winter morning, he stood with his window thrown open longer than usual, waiting for her. He checked his gold pocket watch again and again.

Finally, a white dot appeared against the gray light of dawn. The dot stuttered and dropped in changing air currents. Worry fluttered in his heart as he watched her erratic flight.

She landed on the snowy windowsill, scattering clots of snow onto his rug and down toward the street below. With extreme care, he cupped her body. Her feathers were scarcely colder than the flesh beneath. Her silver eyes looked dull, but showed no alarm—she trusted him.

He brought her inside to the perch in an empty cage next to his bed. His other pigeons cooed in their cages, but she took no notice of them. Her head drooped down to her white breast. She had spent her energy reaching him.

When she warmed, he would feed her. His pigeon keeper, Mr. Smith, would arrive later that morning, and Nikola would ask him what else they could do for her. Mr. Smith had a deep knowledge of pigeons and their maladies. Surely he could make her well.

Nikola washed his hands and watched her from his stiff chair. With each blink, her familiar silver eyes disappeared for longer and longer, until they failed to open at all. Her chest no longer vibrated with breath.

With a sigh, he lifted the limp body from her perch. She had come to him, not to be healed, but to die in warmth and peace. At least he had been able to grant her that.

He cradled the soft body between his palms before placing her inside a plain wooden box lined with a monogrammed handkerchief. He wrapped the warm silk around her like a shroud. Later, he would bury her in the park, but he must first do his day’s work.

He set the box on the table next to his bed, washed his hands again, and went to breakfast. He met with Mr. Smith to tell him only that the white pigeon had passed away, and that he would bury her himself. Mr. Smith said that nothing more could have been done for her, and she was fortunate to have a safe, loving place to take her last breaths. Nikola only nodded, and Mr. Smith did not press him further.

Mr. Smith was the only person who understood about Nikola and the pigeon. Other men would have considered him mad, but Nikola had loved the hen for a long time. The sight of her coming for her morning corn had moved him more than the arrival of his most distinguished visitors. Today was to have been a day of triumph, but melancholy had marred it. She, the most loving constant in his life, had left him.

Her image followed him down to his basement. With one hand in the pocket of his overcoat, he walked through the empty room. Today’s experiment must be conducted here, and not in his upstairs laboratory—not in front of his assistants. He wanted no announcements in the press before he was ready, as had happened so often before.

Tall wood-framed cages held the tenants’ belongings—ordinary items like bedding and furniture and brass candlesticks. Between the cages ran a line of steel columns. Those steel bars faithfully bore the weight of the building above. Taken for granted, they performed their essential task year after year, unyielding and eternal.

He stopped next to the column in the center of the room. Its base rooted deep into the earth beneath his feet, and its crown rose far above his head. This humble steel would serve as the perfect material on which to test his newest device.

When he drew a metal object about twice the size of a deck of cards from the pocket of his jacket, a feeling of satisfaction dulled his grief. He held the device in his palm just as he had recently held the pigeon, with reverence. An uninformed observer would see only the object’s square base with its dial and a curiously turned steel cylinder rising a few inches from the top. This rounded casing could withstand temperatures of more than two hundred degrees and pressure of more than four hundred pounds per square inch.

Nikola visualized the highly efficient pistons he had built inside, supreme examples of the art and skill that marked his peculiar genius. 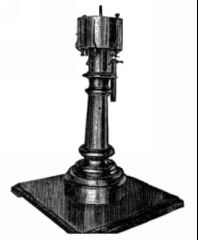 His long fingers stroked the casing. Ordinary looking, but holding immense power. He had built it to test a principle that appeared innocuous, but could destroy Earth itself—a bountiful earth that contained him, his family, and, until recently, a precious white pigeon.

No one else had recognized this resonance, nor thought to harness it, because no one else heard the vibrations of objects as he did. No one else but he felt the telltale tremble of everyday things with their fingertips.

Using simple wooden clamps, he affixed the device to the steel column, tugging on the cylinder to make certain that it couldn’t be dislodged easily. He touched two fingers to the thick column so that his fingertips barely grazed the metal. With the other hand, he turned the dial.

He pictured pistons inside moving in silent precision as they slowly accelerated to the requested speed, like a pigeon pumping its wings to fly. For a long moment he stood next to the column with his head cocked, listening with his ears as well as his fingers. He adjusted the device’s oscillation rate. Again, he waited and listened. He repeated this action countless times, seeking to tune his Oscillator to the natural vibration of the steel.

Eventually, the metal under his fingertips trembled to a faint life. His device had matched the frequency of the steel’s resonant frequency. Time would do the rest.

He left the Oscillator to its work while he unlocked a wooden storage unit containing spools of wire, a stained metal table holding egg-shaped globes of blown glass, and a ladder-back chair. He grasped the chair by its top rung and placed it next to the column, then dusted the seat with his handkerchief, sat, and crossed one long leg over the other. Again, he placed two fingers against the steel, like a doctor feeling for a pulse.

The metal’s deep song thrummed through his fingers and up his arm. The music vibrated in the synovial fluid in his shoulder, trilled through his stomach, and pressed against his ears. He closed his gray eyes to concentrate on the metal’s song, and a small smile crossed his pale face.

He was in tune with the steel.

Mesmerized, he listened too long. The steel trembled too quickly. An ordinary man might not have seen the change, but he did. Tiny oscillations, no bigger than a pigeon’s heartbeat, shivered the length of the column.

The column cracked, like lake ice breaking free after winter.

Sounds intruded on his consciousness—a siren, the tinkle of breaking glass, the creak of other steel columns flexing. His device had succeeded, but perhaps too well.

With one decisive movement, he stood and reached to turn it off. Hot steel seared his fingertips. He gritted his teeth and tried again, but the dial had frozen in position, and the clamps, too, would not budge.

His device pounded remorselessly on.

His usually calm heartbeat sputtered in his chest. If he didn’t stop the motion soon, the column itself might shatter. Even the surrounding columns might break apart. If so, this beautiful building would collapse and bury its occupants, including him and his pigeons upstairs. He would not let this building become their tomb.

He wheeled on the heel of one patent leather shoe and ran for the cage. Thinking it a useless precaution the night before, he had nonetheless given in to a niggling doubt. He had taken a sledgehammer from its usual location in the corner and rested its handle against the table’s edge.

Now he was grateful he had. In two long steps he reached the hammer. He wrapped his long white fingers around the handle and returned to his device. He lifted the hammer high and brought its head down on the deceptively small cylinder. The metal case cracked, but gears within continued to turn. He had engineered his device to withstand shock and force. Again, he brought down the hammer, and yet a third time.

The gears shrieked like a baby bird as metal ground against metal. He flinched, then hardened his heart against his creation. He smote it blow after blow until the misshapen steel fell to the floor and was still. He had stopped its mechanical heart.

Heavy fists pounded on the front door to the building, and angry voices outside shouted for admittance. He had only minutes before one of his neighbors let them inside. He must not be found down here with the device. It was still too hot to touch, so he kicked it into a corner with the toe of his shoe. He polished that toe against the back of his immaculate trousers, smoothed his hair, and settled his jacket into place.

His long legs skipped every other stair as he flew to his laboratory. He entered and closed the door quietly behind him. His assistants looked at him with surprise. He smiled to allay their suspicions and glanced around the laboratory.

Glass had broken in this room, too. The windows had given way, and one assistant sported a thin cut across his cheek. An oval bulb lay shattered on the floor.

His device’s power was writ large in the destruction that surrounded him.

Curious and exhilarating to think that something so small could produce such dramatic changes in the world. Yet he himself, like every man on Earth, had grown from something as small as an egg.

Angry voices grew louder. He couldn’t yet make out their words, but he understood the tone and recognized an Irish accent. The local constabulary, then.