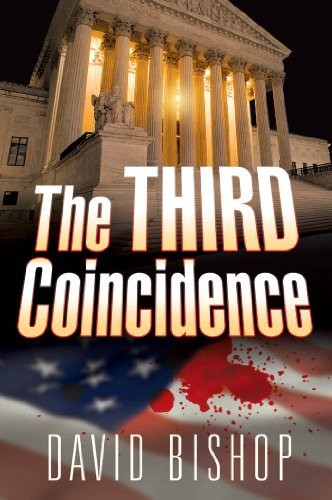 This book is a work of fiction. Names, characters, businesses, organiza- tions, places, and incidents either are the products of the author’s imagi- nation or are used fictitiously. Any resemblance to actual events, businesses, locales, or persons, living or dead, is entirely coincidental.

printed in the united states of america

Brandi Bishop, Kristopher Bishop, and Kaia Bishop I love you all.

SUPREME COURT OF THE UNITED STATES—RULES

Part I. The Court

2.
Six Members of the Court constitute a quorum.
See
28 U.S.C. §1.
In the absence of a quorum on any day appointed for holding a session of the Court, the Justices attending—or if no Justice is present, the Clerk or a Deputy Clerk—may announce that the Court will not meet until there is a quorum.

“Hello, Jack. I’m just leaving the White House. The president would like you to join him tomorrow morning at eleven fifteen. It’s about the death of Justice Monroe.”

Jack McCall’s monitor identified the caller as CIA Director Harriet Miller, his soft-spoken, efficient boss with the look of a librarian and the soul of a cobra.

“All I’ve heard is a heart attack,” McCall said.

“Toxicology came in less than an hour ago,” Miller said. “Poi- son. His ginseng had been laced with ground oleander. The presi- dent wants you on it.”

“That’s it. I have one of the damn things in a pot in my sunroom. The lab people tell me the stuff’s high on the poison scale, particu- larly for Justice Monroe; the guy was way over eighty and had a bad heart.”

“But we’re not a domestic agency.”

“Debate that with the president if you wish,” Director Miller replied. “It’ll just be the two of you. Use the West Executive Avenue checkpoint.” Then she hung up.

It would not be the kind of meeting Jack wanted right now in his life.

As a special assistant for strategy and planning to the Director of Central Intelligence, Jack had spent the afternoon at his desk read- ing the latest high-level releases on America’s covert activities—up- dates put out internally at intervals based on the sensitivity of each operation and global time differences.

After Director Miller’s call, Jack left the agency and walked to his car, a newspaper held above his head sopping up the light rain. Thirty minutes later he walked out of a three-chair barbershop after having a half inch taken off his brown hair that had started curling over his ears.

At rush hour, the road home was nose-to-butt cars, their drivers all in a hurry to get somewhere, with the result that no one was get- ting much of anywhere. As Jack approached the Virginia entrance to the Key Bridge, traffic slowed even more.

Gravel-sized raindrops began hitting the windshield like kami- kaze beetles. He moved the wipers from intermittent to constant, turned on his headlights, and in a few minutes fell under the spell of the rhythm of tires squishing water.

Jack had never questioned that intelligence work would be his career, never until two years ago when his younger brother, Nick, lost his life in a covert Middle East operation on which Jack had been the on-the-ground leader. Dr. Christopher Andujar, a psychi- atrist and friend, had explained that Jack experienced “survivors guilt,” born from the momentary relief that it had been his brother and not himself.

Men died in battle. Nick had understood that, but Nick had died because of someone’s greed and traitorous behavior. The mission plan had included a refueling stop where a Kuwaiti base worker had tipped off the terrorist training camp. The National Security Agency had intercepted that call, but not deciphered its meaning until after Jack’s special forces team had been ambushed. Jack had taken re- venge, but it hadn’t rid him of his black mood.

Ten months ago, on his forty-sixth birthday, Jack had been pro- moted to his current agency desk job. After twenty years of Foreign

Service, he was finally stationed in the U.S. and had bought his first home, an older house with a detached garage. More important, the desk job meant men directly under his command would stop dying. When he got home, he left his car in the driveway, turned off the wipers, loosened his tie, and went in through the side door to

He poured three fingers of Maker’s Mark over ice, walked into the living room, and stared out the window while sipping his drink. The rain hadn’t stopped, but it had softened into the kind that didn’t bounce when it landed and made no noise of its own, while quiet- ing other sounds that had largely gone unnoticed until muted. At this moment, the world seemed at ease and he longed to feel the same. But all he could think of was how the meeting tomorrow morning with the president might pull him back toward his past.

The new nominee for the Supreme Court will face the traditional questions about abortion and the many faces of civil rights. And, perhaps, a controversial new one— a gay person’s right to marry and adopt.

At seven the next morning, U.S. Supreme Court Justice Herbert Clarkson Montgomery’s driver stopped at the curb on Pennsylvania near Seventh Avenue. After more than thirty years on the nation’s highest bench, the justice still loved Washington, D.C., loved to walk the last few blocks, feel his heart quicken as the courthouse came into view. The rain had stopped for nearly half an hour earlier so he got out and walked down Seventh turning into the National Mall.

Monty looked back toward the city’s towering buildings pocked with windows, then up at the charcoal clouds that had stubbornly hung around for days, intermittently dispersing sprinkles, down- pours, and pauses. The crisp air along with an accompanying light breeze had just enough zing to make him feel alive.

From the Mall his routine path took him around the Capitol, across First Street NE, and up the white stairs to the courthouse. Despite having to pause frequently to catch his breath, he liked the exercise of climbing the steps. The exhilaration of looking up at the marble neoclassical building that housed America’s premier Court. He also preferred entering through security at the main door so he

could walk the Great Hall filled with creamy Alabama marble. From there, a short elevator ride delivered him to the upper floors that held the justices’ private chambers.

The Mall’s grounds crew ignored a very old niblick golf club Monty kept hidden behind a dense bush. He could no longer play golf but, in the early mornings, he often lingered to chip for a while, most shots flying less than ten yards, his niblick barely trimming a few blades of grass.

For Monty, an important fringe benefit of being a Supreme Court associate justice was that few people recognized him without his black robe. Anyway, at this hour, he rarely saw anyone.

The sun broke through the gray pallor that roofed the city, the brightness bleaching the deeper hues of the grass. Monty took a golf ball from his pocket, turned it in his hand, and let it roll off his fingers to drop onto the wet grass. Then he reached for his niblick. It wasn’t there.

The Long Walk: A Story of War and the Life That Follows by Brian Castner
Love Restored by Carrie Ann Ryan
The Orenda Joseph Boyden by Joseph Boyden
Drake Chronicles: 03 Out for Blood by Alyxandra Harvey
A Smidgen of Sky by Dianna Dorisi Winget
His Wedding-Night Heir by Sara Craven
Wounded Wings (Cupid Chronicles) by Allen, Shauna
El Principito by Antoine de Saint-Exupéry
The Gentile Witness Book II, Elijah by Samuel David
Glass Tiger by Joe Gores
Our partner