Read The Ties That Bind Online 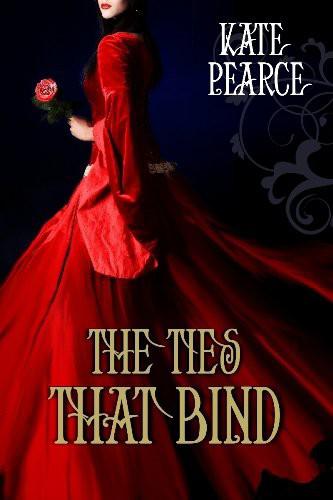 This is a work of fiction. Names, characters, places, brands, media, and incidents are either the product of the author's imagination or are used fictitiously.

Lady Arabella Grayson studied her husband over the rim of her tea cup and quietly fumed. James sat at the opposite end of the vast dining table. A brassy woman, gossip insisted was his latest mistress, sat on his left. She was so close, her bountiful breasts overflowed her skimpy bodice and were almost propped up on James' forearm. His thick blond hair glinted gold in the sunlight streaming through the tall windows of their country house. To his right, another woman gazed at him adoringly.

Arabella bit her lip as she remembered how it felt to have him look at her that way. Not that he had looked her way at all since their wedding day two years previously. Had it all been an elaborate ploy to force her into marriage, enjoy her fortune and get back to his dissolute life? It certainly seemed that way.

She stared out of the window and tried to ignore the high pitched giggle of possible mistress number one. When had it all gone wrong? Their wedding night had been a disaster. He'd been drunk and she was terrified, having come to his bed a virgin expecting nothing. And, in truth, he'd given her nothing. He'd simply taken what he wanted from her, left her bed and never returned.

A hand on her shoulder made her jump. She looked up to see Tom Lakeland, her husband's land agent smiling down at her.

"Not really." She tried to smile. "It was difficult knowing James was just next door."

Tom's hand tightened for an instant on her shoulder and then he stepped back. Last night, she'd half expected to hear James cavorting with his mistress but his bedroom remained quiet. It had occurred to her, somewhere around two in the morning that he hadn't been considerate but had probably gone to his mistress' room instead.

Over the past two years, she'd seen James on only one occasion after she'd informed him of her father's death. She'd known he would appear for the funeral. The reading of a will which conferred a considerable amount of her father's fortune to his only daughter, and thus to her husband, was the only thing interesting enough to force him home.

She realized she'd lost her appetite and got abruptly to her feet.

Arabella hesitated as her husband stood as well and moved around the table to stand at her side.

She looked up at him. He was at least eight inches taller than her, his eyes the pale blue of an arctic winter sky. Once she had believed him to be the most beautiful man in the world and the kindest. Now she could barely stand to be in the same room as him. She didn't attempt to hide her dislike.

His smile didn't reach his eyes. "There are certain matters pertaining to your father's death I would like to discuss with you."

She sighed. "Of course."

He led the way through the maze of corridors until they reached the study. He held the door open for her. As she stepped past him she inhaled the sharp well-remembered scent of his sandalwood soap. Within the study, all was serene. Two of the dogs slept in front of the fire on the faded rug. A portrait of her father dominated the room.

James stared at it and frowned. "That is coming down today. This is my house and your father has been dead for six months. If you want to build a shrine to the old monster, do with it as you will, as long as it's out of my sight."

Arabella curtsied. "That suits me perfectly, sir. I'll put it in my bedroom. There's no chance of you seeing it there."

He glanced at her as he seated himself behind the imposing desk.

"You seem a little annoyed with me, my dear."

Arabella stared at him and tried hard to control her breathing. "Why on earth would you think that?" She imitated the high girlish laugh of his mistress and he winced.

She clenched her hands into fists.

"I am not your dog, sir. If you wish me to respond to you, please treat me with respect."

He got to his feet, rested his palms on his desk and leaned forward. "Sit down,
please
."

She subsided gracefully into a chair, aware her knees were knocking. She hadn't realized quite how angry she was with James until she'd seen him again. Her father's death had liberated her in many ways. She'd vowed never to let another man treat her like a package to be disposed of, her husband included.

I'm not sure what you wish to discuss with me, sir. As far as I understand it, my father's fortune has passed to you. How does that concern me?"

He frowned. "There's no need to sound so aggrieved. I didn't write the laws, dammit. It's not my fault that men inherit their wife's money."

"I don't care about the money. I have no wish to touch my father's fortune."

"Because he was a vile man who gained his fortune by exploiting the labor of others."

He watched her very carefully. "I always thought you idolized the man."

Arabella shuddered. "He terrified me."

She lifted her head and held his gaze. "Yes he is. And I'm glad."

He let out a long breath and studied his clasped hands. "We need to learn to deal better with each other. We are married. We have a duty to make this relationship work."

Arabella considered him carefully. "Why?"

"Why now? You have everything you wanted out of our bargain. What possibly could have changed in the last two years to make you decide to approach me like this?"

"We are older and wiser. And as I already mentioned, your father is dead. I would like to settle his fortune on our children."

Arabella chose to ignore the implications of that statement. "We have drifted apart. Why change a situation that suits us both so well?"

He frowned, one hand tapped a relentless tattoo on the desk. "Perhaps you might explain."

She shrugged. "You have your life in
London
and your ladybirds; I have my life here and my own…pleasures."

"You are fucking another man?"

His expression darkened and a thrill of fear coursed through her. She couldn't complain that she didn't have his full attention now.

"I didn't say that. I simply suggested that I have learned a lot since our first unfortunate night together."

Before she had time to react he came around the desk, grabbed her arm and yanked her out of her chair. "You are fucking another man."

Up close, the deep lines on either side of his mouth seemed harsh.

"Why should you care?"

"Because you are my wife."

She smiled at him. "You are my husband and from all accounts you fuck anything willing or not."

"Be careful, Arabella. As your husband I have a right to know that my eldest son is mine, born from my seed and my seed alone."

She licked her lips, enjoying the feel of his hands locked around her upper arms, the strength of his body against her own.

"With the amount of women you bed, surely you already have enough children?"

He let out his breath. "Don't play the innocent with me. You know I mean my legitimate offspring."

"So you do have bastards then? Do you pay for their keep? Should I start knitting shawls and booties to hand out to their weeping mothers?"

He bent his head and kissed her, sliding his tongue between her lips to take possession of her mouth as if he belonged there. Arabella bit down hard on his lip. He swore as he jerked away from her.

"To the best of my knowledge, I have no bastards. And I don't expect you to provide me with any either."

She touched her finger to the bead of blood on his lip. "As I understand it, any child I bear you is considered legitimate whether you like it or not."

He kissed her finger and smiled. "You will bear my children. I am convinced of it." He stepped back and bowed. "In fact we will start tonight. Be ready to welcome me into your bed."

Arabella shot him a frosty glare. "Welcome you? When you have invited two of your mistresses into my house, into my
home
?"

He moved toward the door. "I promise I'll send them on their way this afternoon if you will accept me into your bed tonight."