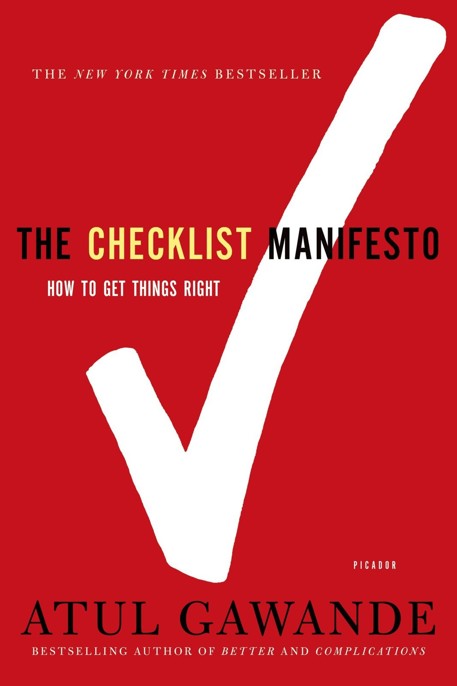 BETTER: A SURGEON’S NOTES ON PERFORMANCE

COMPLICATIONS: A SURGEON’S NOTES ON AN IMPERFECT SCIENCE

THE CHECKLIST MANIFESTO: HOW TO GET THINGS RIGHT

®
are registered trademarks
of Henry Holt and Company, LLC.

Copyright © 2009 by Atul Gawande
All rights reserved.
Distributed in Canada by H. B. Fenn and Company Ltd.

Some material in this book originally appeared in the
New Yorker
essay “The Checklist” in different form.

For Hunter, Hattie, and Walker

1.
THE PROBLEM OF EXTREME COMPLEXITY

3.
THE END OF THE MASTER BUILDER

8.
THE HERO IN THE AGE OF CHECKLISTS

I was chatting with a medical school friend of mine who is now a general surgeon in San Francisco. We were trading war stories, as surgeons are apt to do. One of John’s was about a guy who came in on Halloween night with a stab wound. He had been at a costume party. He got into an altercation. And now here he was.

He was stable, breathing normally, not in pain, just drunk and babbling to the trauma team. They cut off his clothes with shears and looked him over from head to toe, front and back. He was of moderate size, about two hundred pounds, most of the excess around his middle. That was where they found the stab wound, a neat two-inch red slit in his belly, pouting open like a fish mouth. A thin mustard yellow strip of omental fat tongued out of it—fat from inside his abdomen, not the pale yellow, superficial fat that
lies beneath the skin. They’d need to take him to the operating room, check to make sure the bowel wasn’t injured, and sew up the little gap.

If it were a bad injury, they’d need to crash into the operating room—stretcher flying, nurses racing to get the surgical equipment set up, the anesthesiologists skipping their detailed review of the medical records. But this was not a bad injury. They had time, they determined. The patient lay waiting on his stretcher in the stucco-walled trauma bay while the OR was readied.

Then a nurse noticed he’d stopped babbling. His heart rate had skyrocketed. His eyes were rolling back in his head. He didn’t respond when she shook him. She called for help, and the members of the trauma team swarmed back into the room. His blood pressure was barely detectible. They stuck a tube down his airway and pushed air into his lungs, poured fluid and emergency-release blood into him. Still they couldn’t get his pressure up.

So now they
were
crashing into the operating room—stretcher flying, nurses racing to get the surgical equipment set up, the anesthesiologists skipping their review of the records, a resident splashing a whole bottle of Betadine antiseptic onto his belly, John grabbing a fat No. 10 blade and slicing down through the skin of the man’s abdomen in one clean, determined swipe from rib cage to pubis.

He drew the electrified metal tip of the cautery pen along the fat underneath the skin, parting it in a line from top to bottom, then through the fibrous white sheath of fascia between the abdominal muscles. He pierced his way into the abdominal cavity itself, and suddenly an ocean of blood burst out of the patient.

The blood was everywhere. The assailant’s knife had gone more than a foot through the man’s skin, through the fat, through the muscle, past the intestine, along the left of his spinal column, and right into the aorta, the main artery from the heart.

“Which was crazy,” John said. Another surgeon joined to help and got a fist down on the aorta, above the puncture point. That stopped the worst of the bleeding and they began to get control of the situation. John’s colleague said he hadn’t seen an injury like it since Vietnam.

The description was pretty close, it turned out. The other guy at the costume party, John later learned, was dressed as a soldier—with a bayonet.

The patient was touch and go for a couple days. But he pulled through. John still shakes his head ruefully when he talks about the case.

There are a thousand ways that things can go wrong when you’ve got a patient with a stab wound. But everyone involved got almost every step right—the head-to-toe examination, the careful tracking of the patient’s blood pressure and pulse and rate of breathing, the monitoring of his consciousness, the fluids run in by IV, the call to the blood bank to have blood ready, the placement of a urinary catheter to make sure his urine was running clear, everything. Except no one remembered to ask the patient or the emergency medical technicians what the weapon was.

“Your mind doesn’t think of a bayonet in San Francisco,” John could only say.

He told me about another patient, who was undergoing an operation to remove a cancer of his stomach when his heart suddenly stopped.
*
John remembered looking up at the cardiac monitor and saying to the anesthesiologist, “Hey, is that asystole?” Asystole is total cessation of heart function. It looks like a flat line on the monitor, as if the monitor is not even hooked up to the patient.

The anesthesiologist said, “A lead must have fallen off,” because it seemed impossible to believe that the patient’s heart had stopped. The man was in his late forties and had been perfectly healthy. The tumor was found almost by chance. He had gone to see his physician about something else, a cough perhaps, and mentioned he’d been having some heartburn, too. Well, not heartburn exactly. He felt like food sometimes got stuck in his esophagus and wouldn’t go down and
that
gave him heartburn. The doctor ordered an imaging test that required him to swallow a milky barium drink while standing in front of an X-ray machine. And there on the images it was: a fleshy mouse-size mass, near the top of the stomach, intermittently pressing up against the entrance like a stopper. It had been caught early. There were no signs of spread. The only known cure was surgery, in this case a total gastrectomy, meaning removal of his entire stomach, a major four-hour undertaking.

The team members were halfway through the procedure. The cancer was out. There’d been no problems whatsoever. They were getting ready to reconstruct the patient’s digestive tract when the monitor went flat-line. It took them about five
seconds to figure out that a lead had not fallen off. The anesthesiologist could feel no pulse in the patient’s carotid artery. His heart had stopped.

John tore the sterile drapes off the patient and started doing chest compressions, the patient’s intestines bulging in and out of his open abdomen with each push. A nurse called a Code Blue.

John paused here in telling the story and asked me to suppose I was in his situation. “So, now, what would you do?”

I tried to think it through. The asystole happened in the midst of major surgery. Therefore, massive blood loss would be at the top of my list. I would open fluids wide, I said, and look for bleeding.