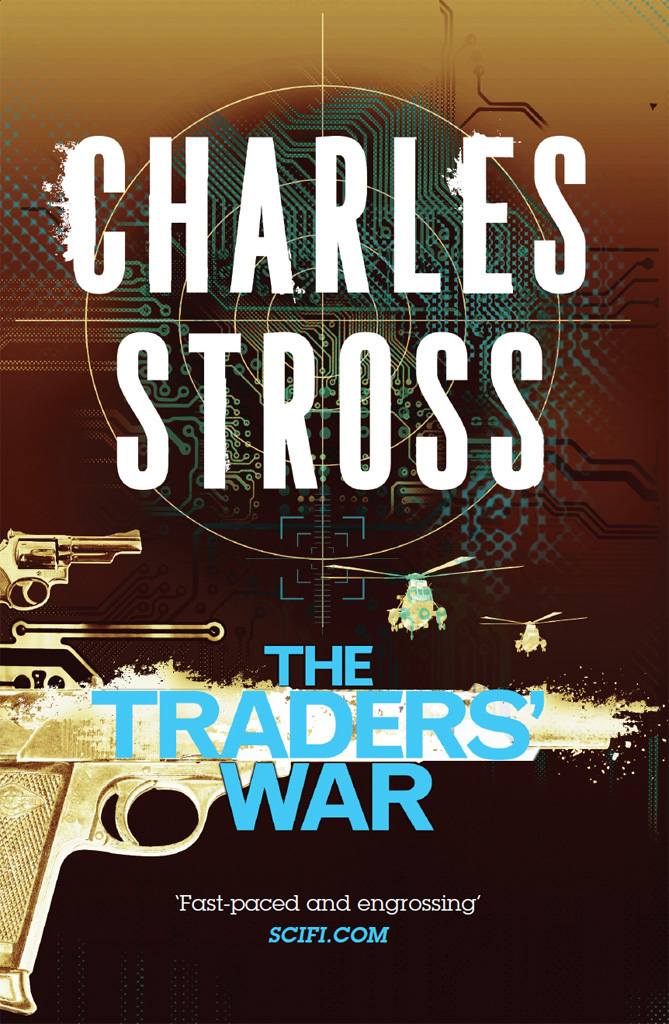 Thank you for buying this book. You may have noticed that it is free of Digital Rights Management. This means we have not enforced copy protection on it. All Tor ebooks are
available DRM-free so that once you purchase one of our ebooks, you can download it as many times as you like, on as many e-readers as you like.

We believe that making our Tor ebooks DRM-free is the best for our readers, allowing you to use legitimately-purchased ebooks in perfectly legal ways, like moving your library
from one e-reader to another. We understand that DRM can make your ebooks less easy to read. It also makes building and maintaining your digital library more complicated. For these reasons, we
are committed to remaining DRM-free.

We ask you for your support in ensuring that our DRM-free ebooks are not subject to piracy. Illegally downloaded books deprive authors of their royalties, the salaries they
rely on to write. If you want to report an instance of piracy, you can do so by emailing us:
[email protected]
.

The Tor UK team & our authors

For Andrew, Lorna, James, and Scott
also for Gil, Jane, George, and Leo

AFTER THE WEDDING PARTY

Nail lacquer, the woman called Helge reflected as she paused in the antechamber, always did two things to her: it reminded her of her mother, and it made her feel like a
rebellious little girl. She examined the fingertips of her left hand, turning them this way and that in search of minute imperfections in the early afternoon sunlight slanting through the huge
window behind her. There weren’t any. The maidservant who had painted them for her had poor nails, cracked and brittle from hard work; her own, in contrast, were pearlescent and glossy, and
about a quarter-inch longer than she was comfortable with. There seemed to be a lot of things that she was uncomfortable with these days. She sighed quietly and glanced at the door.

The door opened at that moment. Was it coincidence, or was she being watched? Liveried footmen inclined their heads as another spoke. ‘Milady, the duchess bids you enter. She is waiting in
the day room.’

Helge swept past them with a brief nod – more acknowledgment of their presence than most of her rank would bother with – and paused to glance back down the hallway as her retinue (a
lady-in-waiting, a court butler, and two hard-faced, impassive bodyguards) followed her. ‘Wait in the hall,’ she told the guards. ‘
You
can accompany me, but wait at the
far end of the room,’ she told her attendant ingénue. Lady Kara nodded meekly. She’d been slow to learn that Helge bore an uncommon dislike for having her conversations
eavesdropped on: there had been an unfortunate incident some weeks ago, and the lady-in-waiting had not yet recovered her self-esteem.

The hall was perhaps sixty feet long and wide enough for a royal entourage. The walls, paneled in imported oak, were occupied by window bays interspersed with oil paintings and a few more-recent
daguerreotypes of noble ancestors, the scoundrels and skeletons cluttering up the family tree. Uniformed servants waited beside each door. Helge paced across the rough marble tiles, her spine rigid
and her shoulders set defensively. At the end of the hall an equerry wearing the polished half-armor and crimson breeches of his calling bowed, then pulled the tasseled bell-pull beside the double
doors. ‘The Countess Helge von Thorold d’Hjorth!’

The doors opened, ushering Countess Helge inside, leaving servants and guards to cool their heels at the threshold.

The day room was built to classical proportions – but built large, in every dimension. Four windows, each twelve feet high, dominated the south wall, overlooking the regimented lushness of
the gardens that surrounded the palace. The ornate plasterwork of the ceiling must have occupied a master and his journeymen for a year. The scale of the architecture dwarfed the merely human
furniture, so that the chaise longue the duchess reclined on, and the spindly rococo chair beside it, seemed like the discarded toy furniture of a baby giantess. The duchess herself looked
improbably fragile: gray hair growing out in intricately coiffed coils, face powdered to the complexion of a china doll, her body lost in a court gown of black lace over burgundy velvet. But her
eyes were bright and alert – and knowing.

Helge paused before the duchess. With a little moue of concentration she essayed a curtsey. ‘Your grace, I are – am – happy to see you,’ she said haltingly in
Hochsprache. ‘I – I – oh
damn
.’ The latter words slipped out in her native tongue. She straightened her knees and sighed. ‘Well? How am I doing?’

‘Hmm.’ The duchess examined her minutely from head to foot, then nodded slightly. ‘You’re getting better. Well enough to pass tonight. Have a seat.’ She gestured at
the chair beside her.

Miriam sat down. ‘As long as nobody asks me to dance,’ she said ruefully. ‘I’ve got two left feet, it seems.’ She plucked at her lap. ‘And as long as I
don’t end up being cornered by a drunken backwoods peer who thinks not being fluent in his language is a sign of an imbecile. And as long as I don’t accidentally mistake some long-lost
third cousin seven times removed for the hat-check clerk and resurrect a two-hundred-year-old blood feud. And as long as – ’

‘Dear,’ the duchess said quietly, ‘do please shut up.’

The countess, who had grown up as Miriam but whom everyone around her but the duchess habitually called Helge, stopped in mid-flow. ‘Yes, Mother,’ she said meekly. Folding her hands
in her lap she breathed out. Then she raised one eyebrow.

The duchess looked at her for almost a minute, then nodded minutely. ‘You’ll pass,’ she said. ‘With the jewelry, of course. And the posh frock. As long as you don’t
let your mouth run away with you.’ Her cheek twitched. ‘As long as you remember to be Helge, not Miriam.’

‘Of course you do.’ The duchess finally smiled. ‘Imposter syndrome goes with the territory.’ The smile faded. ‘And I didn’t do you any favors in the long run
by hiding you from all this.’ She gestured around the room. ‘It becomes harder to adapt, the older you get.’

‘Oh, I don’t know.’ Miriam frowned momentarily. ‘I can deal with disguises and a new name and background; I can even cope with trying to learn a new language, it’s
the sense of permanence that’s disconcerting.
I
grew up an only child, but
Helge
has all these – relatives – I didn’t grow up with, and they’re real.
That’s hard to cope with. And
you’re
here, and part of it! And now this evening’s junket. If I thought I could avoid it, I’d be in my rooms having a stomach cramp
all afternoon.’

‘That would be a Bad Idea.’ The duchess still had the habit of capitalizing her speech when she was waxing sarcastic, Miriam noted.

‘Yes, I know that. I’m just – there are things I should be doing that are more important than attending a royal garden party. It’s all deeply tedious.’

‘With an attitude like that you’ll go far.’ A pause. ‘All the way to the scaffold if you don’t watch your lip, at least in public. Do I need to explain how
sensitive to social niceties your position here is? This is not America – ’

‘Well, we’re stuck with the way things are,’ the duchess said sharply, then subsided. ‘I’m sorry, dear, I don’t mean to snap. I’m just worried for you.
The sooner you learn how to mind yourself without mortally offending anyone by accident the happier I’ll be.’

‘Um.’ Miriam chewed on the idea for a while.
She’s stressed
, she decided.
Is that all it is, or is there something more?
‘Well, I’ll
try
.
But I came here to see how you are, not to have a moan on your shoulder. So, how are you?’

‘Well, now that you ask . . .’ Her mother smiled and waved vaguely at a table behind her chaise longue. Miriam followed her gesture: two aluminum crutches, starkly functional, lay
atop a cloisonné stand next to a pill case. ‘The doctor says I’m to reduce the prednisone again next week. The Copaxone seems to be helping a lot, and that’s just one
injection a day. As long as nobody accidentally forgets to bring me next week’s prescription I’ll be fine.’

‘But surely nobody would – ’

‘Really?’ The duchess glanced back at her daughter, her expression unreadable. ‘You seem to have forgotten what kind of a place this is. The meds aren’t simply costly in
dollars and cents: someone has to bring them across from the other world. And courier time is priceless. Nobody gives me a neatly itemized bill, but if I want to keep on receiving them I have to
pay. And the first rule of business around here is: Don’t piss off the blackmailers.’

Miriam’s reluctant nod seemed to satisfy the duchess, because she relented: ‘Remember, a lady never unintentionally gives offense – especially to people she depends on to keep
her alive. If you can hang on to just one rule to help you survive in the Clan, make it that one. But I’m losing the plot. How are
you
doing? Have there been any
after-effects?’

‘After-effects?’ Miriam caught her hand at her chin and forced herself to stop fidgeting. She flushed, pulse jerking with an adrenaline surge of remembered fear and anger. ‘I
– ’ She lowered her hand. ‘Oh, nothing
physical
,’ she said bitterly. ‘Nothing . . .’

‘I’ve been thinking about him a lot lately, Miriam. He wouldn’t have been good for you, you know.’

‘I know.’ The younger woman – youth being relative: she wouldn’t be seeing thirty again – dropped her gaze. ‘The political entanglements made it a messy
prospect at best,’ she said. ‘Even if you discounted his weaknesses.’ The duchess didn’t reply. Eventually Miriam looked up, her eyes burning with emotions she’d
experienced only since learning to be Helge. ‘I haven’t forgiven him, you know.’

‘No. Your goddamn half-brother. He’s meant to be in charge of security! But he – ’ Her voice began to break.

‘Yes, yes, I know. And do you think he has been sleeping well lately? I’m led to believe he’s frantically busy right now. Losing Roland was the least of our problems, if
you’ll permit me to be blunt, and Angbard has a major crisis to deal with. Your affair with him can be ignored, if it comes to it, by the Council. It’s not as if you’re a teenage
virgin to be despoiled, damaging some aristocratic alliance by losing your honor – and you’d better think about that some more in future, because honor is
the
currency in the
circles you move in, a currency that once spent is very hard to regain – but the deeper damage to the Clan that Matthias inflicted – ’

‘Tell me about it,’ Miriam said bitterly. ‘As soon as I was back on my feet they told me I could only run courier assignments to and from a safe house. And I’m not
allowed to go home!’

‘Matthias knows you,’ her mother pointed out. ‘If he mentioned you to his new employers – ’

‘I understand.’ Miriam subsided, arms crossed before her and back set defensively. After a moment she started tapping her toes.

‘Stop that!’ Moderating her tone, the duchess added, ‘If you do that in public it sends entirely the wrong message. Appearances are everything, you’ve
got
to
learn that.’