Read The Twelve (Book Two of The Passage Trilogy): A Novel Online

The Twelve (Book Two of The Passage Trilogy): A Novel 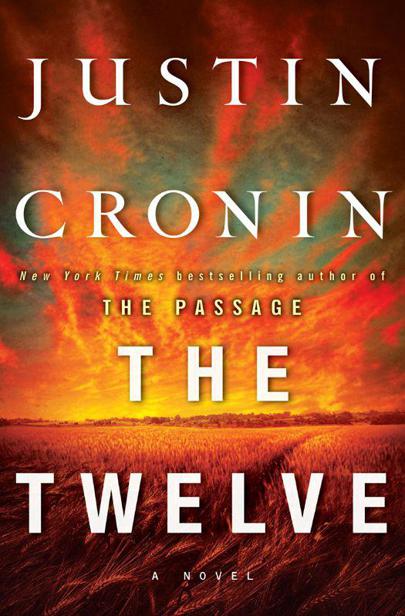 The Twelve
is a work of fiction. Names, characters, places, and incidents are products of the author’s imagination or are used fictitiously. Any resemblance to actual events, locales, or persons, living or dead, is entirely coincidental.

Grateful acknowledgment is made to the following for permission to reprint previously published material:

She stood beside me for years, or was it a moment? I cannot remember. Maybe I loved her, maybe I didn’t. There was a house, and then no house. There were trees, but none remain. When no one remembers, what is there? You, whose moments are gone, who drift like smoke in the afterlife, tell me something, tell me anything.

From the Writings of the First Recorder (“The Book of Twelves”)

Center for the Study of Human Cultures and Conflicts

1. For it came to pass that the world had grown wicked, and men had taken war into their hearts, and committed great defilements upon every living thing, so that the world was as a dream of death;

2. And God looked upon his creation with a great sadness, for his spirit no longer abided with mankind.

3. And the LORD said: As in the days of Noah, a great deluge shall sweep over the earth; and this shall be a deluge of blood. The monsters of men’s hearts shall be made flesh, devouring all in their path. And they shall be called Virals.

4. The first shall walk among you disguised as a virtuous man, concealing the evil within him; and it shall come to pass that a sickness will befall him, such that he is made into the likeness of a demon, terrible to gaze upon. And he shall be the father of destruction, called the Zero.

5. And men shall say: Would not such a being make the mightiest of soldiers? Would not the armies of our enemies lay down their weapons to cover their eyes at the very sight of him?

6. And a decree shall go forth from the highest offices that twelve criminals shall be chosen to share of the Zero’s blood, becoming demons
also; and their names shall be as one name, Babcock-Morrison-Chávez-Baffes-Turrell-Winston-Sosa-Echols-Lambright-Martínez-Reinhardt-Carter, called the Twelve.

7. But also I will choose one among you who is pure of heart and mind, a child to stand against them; and I will send a sign so that all may know, and this sign shall be a great commotion of animals.

8. And this was Amy, whose name is Love: Amy of Souls, the Girl from Nowhere.

9. And the sign went forth in the place of Memphis, the beasts howling and screeching and trumpeting; and one who saw was Lacey, a sister in the eyes of God. And the LORD said to Lacey:

10. You too are chosen, to be as a helpmate to Amy, to show her the way. Wither she goes you shall go also; and your journey shall be a hardship, lasting many generations.

11. You shall be as a mother to the child, whom I have brought forth to heal the broken world; for within her I shall build an ark to carry the spirits of the righteous.

12. And thus did Lacey according to all that God commanded her, so did she.

1. And it came to pass that Amy was taken to the place of Colorado to be the captive of evil men; for in that place the Zero and the Twelve abided in chains, and Amy’s captors intended that she should become one of them, joining to them in mind.

2. And there she was given the blood of the Zero, and fell into a swoon as unto death; but neither did she die, nor acquire monstrous form. For it was not the design of God that such a thing should come to pass.

3. And in this state Amy lingered through a period of days, until a great calamity occurred, such that there should be a Time Before and a Time After; for the Twelve escaped and the Zero also, unleashing death upon the earth.

4. But one man befriended Amy, and took pity upon her, and stole her away from that place. And this was Wolgast, a man righteous in his generation, beloved of God.

5. And together Amy and Wolgast made their way to the place of Oregon, deep in the mountains; and there they abided in the time known as the Year of Zero.

6. For in that time the Twelve beset the face of the world with their great hunger, killing every kind; and those they did not feed upon were taken up, joining to them in mind. And in this manner the Twelve were multiplied one million–fold to form the Twelve Viral Tribes, each with his Many, who roamed the earth without name or memory, laying waste to every living thing.

7. Thus did the seasons pass; and Wolgast became as a father to Amy, who had none, nor he a child of his own; and likewise did he love her, and she him.

8. And also did he see that Amy was not as he was, nor like any living person upon the earth; for neither did she age, nor suffer pain, nor seek nourishment or rest. And he feared what would become of her, when he himself was gone.

9. And it came to pass that a man came to them from the place of Seattle; and Wolgast did slay him, lest the man should become a demon in their midst. For the world had become a place of monsters, none living but they.

10. And in this manner they remained as father and daughter, each attending to the other, until a night when a blinding light filled the sky, too bright to gaze upon; and in the morning the air was foul with a rank odor, and ashes descended upon every surface.

11. For the light was the light of death, causing Wolgast to fall ill with a lethal sickness. And Amy was left to wander the ravaged earth alone, with none but the Virals for company.

12. And in this manner time passed, four score and twelve years in sum.

1. So it was that in the ninety-eighth year of her life in the place of California Amy came upon a city; and this was The First Colony, four score and ten souls abiding within its walls, the descendants of children who had made their way from the place of Philadelphia in the Time Before.

2. But at the sight of Amy the people became frightened, for they knew nothing of the world, and many words were spoken against her, and she was imprisoned; and much confusion occurred, such that she was forced to flee in the company of others.

3. And these were Peter, Alicia, Sara, Michael, Hollis, Theo, Mausami, and Hightop, eight in sum; and each had a cause of righteousness in
his heart, and desired that they should see the world outside the city where they dwelled.

4. And among them Peter was first in name, and Alicia second, and Sara third, and Michael fourth; and likewise were the others blessed in the eyes of God.

5. And together they left that place under cover of dark to find the secret of the world’s undoing, in the place of Colorado, a journey of one-half year in the wilderness, enduring many tribulations; and the greatest of these was The Haven.

6. For in the place of Las Vegas they were taken as captives to stand before Babcock, First of Twelve; for the dwellers of that city were as slaves to Babcock and his Many, and would sacrifice two of their number for each new moon, so that they might live.

7. And Amy and the others were cast into the place of sacrifice, and did battle with Babcock, who was terrible to behold; and many lives were lost. And together they fled from that place, lest they too should die.

8. And one among them fell, who was the boy, Hightop; and Amy and her fellows buried him, marking it as a place of remembrance.

9. And a great grief was upon them, for Hightop was the most beloved of their number; but tarry could they not, for Babcock and his Many did pursue them.

10. And after more time had passed Amy and her fellows came upon a house, untouched by time; for God had blessed it, making it hallowed ground. And this was known as the Farmstead. And there they rested in safety, seven days in sum.

11. But two among them chose to stay in that place, for the woman was with child. And that child was to be born Caleb, who was beloved of God.

12. Thus the others continued while two remained behind.