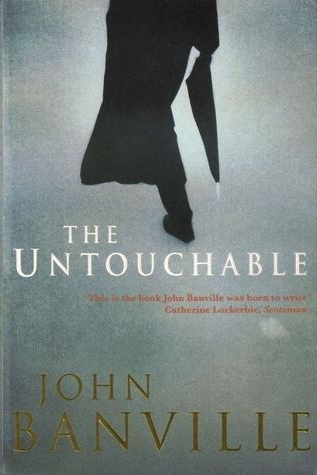 Acclaim for
JOHN BANVILLE’s
THE UNTOUCHABLE

“[Banville’s] books are not only an illumination to read—for they are always packed with information and learning—but a joyful and durable source of aesthetic satisfaction.”

—The New York Review of Books

“Enthralling…. Victor Maskell is a thinly disguised Anthony Blunt Banville has pulled off a marvelous series of tricks.”

“Banville has the skill, ambition and learning to stand at the end of the great tradition of modernist writers.”

“It must by now be an open secret that on this [U.K.] side of the Atlantic, Banville is the most intelligent and stylish novelist at work.”

“An icy detailed portrait of a traitor, and a precise meditation on the nature of belief and betrayal … a subtle, sad, and deeply moving work.”

“Delectably droll and masterful The rich fabric of this novel blends the shrewd humor of a comedy of manners with the suspense of a tale of espionage.”

“[Written with] grace and intelligence.… His story is so well told that why he spied—and who betrayed him—become secondary.”

The Book of Evidence

John Banville was born in Wexford, Ireland, in 1945. He is the author of more than ten novels, including
The Book of Evidence,
which was shortlisted for the Booker Prize and won the Guinness Peat Aviation Award. He won the Booker Prize for his novel
The Sea
in 2005. He lives in Dublin. 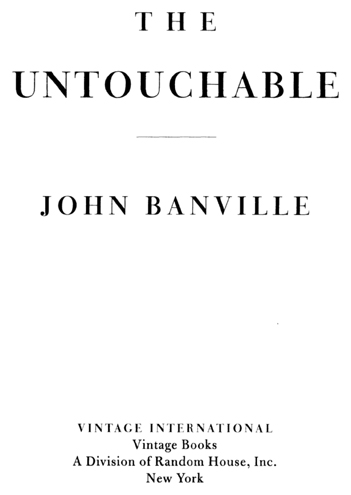 to Colm and Douglas

F
irst day of the new life. Very strange. Feeling almost skittish all day. Exhausted now yet feverish also, like a child at the end of a party. Like a child, yes: as if I had suffered a grotesque form of rebirth. Yet this morning I realised for the first time that I am an old man. I was crossing Gower Street, my former stamping ground. I stepped off the path and something hindered me. Odd sensation, as if the air at my ankles had developed a flaw, seemed to turn—what is the word: viscid?—and resisted me and I almost stumbled. Bus thundering past with a grinning blackamoor at the wheel. What did he see? Sandals, mac, my inveterate string bag, old rheumy eye wild with fright. If I had been run over they would have said it was suicide, with relief all round. But I will not give them that satisfaction. I shall be seventy-two this year. Impossible to believe. Inside, an eternal twenty-two. I suppose that is how it is for everybody old. Brr.

Never kept a journal before. Fear of incrimination. Leave nothing in writing, Boy always said. Why have I started now? I just sat down and began to write, as if it were the most natural thing in the world, which of course it is not. My last testament. It is twilight, everything very still and poignant. The trees in the square are dripping. Tiny sound of birdsong. April. I do not like the spring, its antics and agitations; I fear that anguished seething in the heart, what it might make me do. What it might
have made
me do: one has to be scrupulous with tenses, at my
age. I miss my children. Goodness, where did that come from? They are hardly what you could call children any more. Julian must be—well, he must be forty this year, which makes Blanche thirty-eight, is it? Compared to them I seem to myself hardly grown-up at all. Auden wrote somewhere that no matter what the age of the company, he was always convinced he was the youngest in the room; me, too. All the same, I thought they might have called.
Sorry to hear about your treachery, Daddums.
Yet I am not at all sure I would want to hear Blanche sniffling and Julian tightening his lips at me down the line. His mother’s son. I suppose all fathers say that.

Public disgrace is a strange thing. Fluttery feeling in the region of the diaphragm and a sort of racing sensation all over, as of the blood like mercury slithering along heavily just under the skin. Excitement mixed with fright makes for a heady brew. At first I could not think what this state reminded me of, then it came to me: those first nights on the prowl after I had finally admitted to myself it was my own kind that I wanted. The same hot shiver of mingled anticipation and fear, the same desperate grin trying not to break out. Wanting to be caught. To be set upon. To be manhandled. Well, past all that now. Past everything, really. There is a particular bit of blue sky in
Et in Arcadia Ego,
where the clouds are broken in the shape of a bird in swift flight, which is the true, clandestine centre-point, the pinnacle of the picture, for me. When I contemplate death, and I contemplate it with an ever-diminishing sense of implausibility in these latter days, I see myself swaddled in zinc-white cerements, more a figure out of El Greco than Poussin, ascending in a transport of erotic agony amid alleluias and lip-farts through a swirl of clouds the colour of golden tea head-first into just such a patch of pellucid
bleu céleste.

Switch on the lamp. My steady, little light. How neatly it defines this narrow bourn of desk and page in which I have always found my deepest joy, this lighted tent wherein I crouch in happy hiding from the world. For even the pictures were more a matter of mind than eye. Here there is everything that—

That was a call from Querell. Well, he certainly has nerve, I’ll say that for him. The telephone ringing gave me a dreadful start.

I have never got used to this machine, the way it crouches so malevolently, ready to start clamouring for attention when you least expect it, like a mad baby. My poor heart is still thudding in the most alarming way. Who did I think it would be? He was calling from Antibes. I thought I could hear the sea in the background and I felt envious and annoyed, but more likely it was just the noise of traffic passing by outside his flat, along the Corniche, is it?—or is that somewhere else? Heard the news on the World Service, so he said. “Dreadful, old man, dreadful; what can I say?” He could not keep the eagerness out of his voice. Wanted all the dirty details. “Was it sex they got you on?” How disingenuous—and yet how little he realises, after all. Should I have challenged him, told him I know him for his perfidy? What would have been the point. Skryne reads his books, he is a real fan. “That Querell, now,” he says, doing that peculiar whistle with his dentures, “he has the measure of us all.” Not of me, he hasn’t, my friend; not of me. At least, I hope not.

No one else has called. Well, I hardly expected that he would…

I shall miss old Skryne. No question now of having to deal with him any more; that is all over, along with so much else. I should feel relieved but, oddly, I do not. We had become a kind of double act at the end, he and I, a music hall routine.
I say I say I say, Mr. Skryne! Well, bless my soul, Mr. Bones!
He was hardly the popular image of an interrogator. Hardy little fellow with a narrow head and miniature features and a neat thatch of very dry, stone-coloured hair. He reminds me of the fierce father of the madcap bride in those Hollywood comedies of the thirties. Blue eyes, not piercing, even a little fogged (incipient cataracts?). The buffed brogues, the pipe he plays with, the old tweed jacket with elbow patches. Ageless. Might be anything from fifty to seventy-five. Nimble mind, though, you could practically hear the cogs whirring. And an amazing memory. “Hold on a sec,” he would say, stabbing at me with his pipe-stem, “let’s run over that bit once more,” and I would have to unpack the delicate tissue of lies I had been spinning him, searching with frantic calmness as I did so for the flaw he had detected in the fabric. By now I was only lying for fun, for recreation, you might say, like a retired tennis pro knocking up with an old opponent.

I had no fear that he would discover some new enormity—I have confessed to everything by now, or almost everything—but it seemed imperative to maintain consistency, for aesthetic reasons, I suppose, and in order to be consistent it was necessary to invent. Ironic, I know. He has the tenacity of the ferret: never let go. He is straight out of Dickens; I picture a crooked little house in Stepney or Hackney or wherever it is he lives, complete with termagant wife and a brood of cheeky nippers. It is another of my besetting weaknesses, to see people always as caricatures. Including myself.

Not that I recognise myself in the public version of me that is being put about now. I was listening on the wireless when our dear PM (I really do admire her; such firmness, such fixity of purpose, and so handsome, too, in a fascinatingly mannish way) stood up in the Commons and made the announcement, and for a moment I did not register my own name. I mean I thought she was speaking of someone else, someone whom I knew, but not well, and whom I had not seen for a long time. It was a very peculiar sensation. The Department had already alerted me to what was to come—terribly rude, the people they have in there now, not at all the easygoing types of my day—but it was still a shock. Then on the television news at midday they had some extraordinary blurred photographs of me, I do not know how or where they got them, and cannot even remember them being taken—apt verb, that, applied to photography: the savages are right, it is a part of one’s soul that is being taken away. I looked like one of those preserved bodies they dig up from Scandinavian bogs, all jaw and sinewy throat and hooded eyeballs. Some writer fellow, I have forgotten or suppressed his name—a “contemporary historian,” whatever that may be—was about to identify me, but the government got in first, in what I must say was a clumsy attempt to save face; I was embarrassed for the PM, really I was. Now here I am, exposed again, and after all this time. Exposed!—what a shiversome, naked-sounding word. Oh, Querell, Querell. I
know
it was you. It is the kind of thing you would do, to settle an old score. Is there no end to life’s turbulences? Except the obvious one, I mean.

The Clique by Lisi Harrison
The Cloud by Matt Richtel
Courage Dares by Nancy Radke
The Slayer (Untamed Hearts #2) by Kele Moon
Don’t You Forget About Me by Alexandra Potter
Tales of the Ragoon, Kate's Movie Star by Stan Morris
The Red Hot Fix by T. E. Woods
A Dangerous Infatuation by Chantelle Shaw
Bad Science by Ben Goldacre
Revved (Axle Alley Vipers) by Sherilee Gray
Our partner