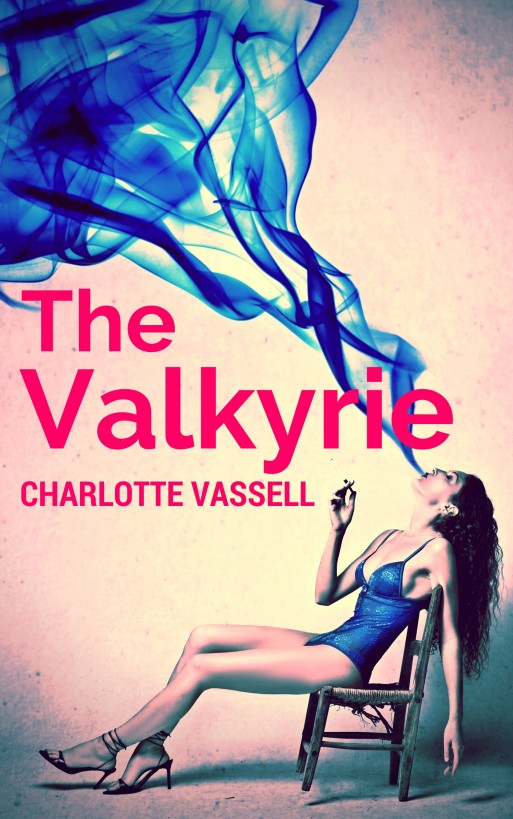 Published by Charlotte Vassell at Smashwords

This ebook is licensed for your personal enjoyment
only. This ebook may not be re-sold or given away to other people.
If you would like to share this book with another person, please
purchase an additional copy for each recipient. If you’re reading
this book and did not purchase it, or it was not purchased for your
enjoyment only, then please return to Smashwords.com or your
favorite retailer and purchase your own copy. Thank you for
respecting the hard work of this author.

I'd like to
thank everyone who has allowed me to talk at them about this book
and very politely nodded along, humoured me and showered me with
kind words of encouragement. Chief amongst you are Sasha, Louise,
Sarah, Sam, Celine, Amy and my auntie Denise. I'd especially like
to thank my auntie Michele for her tireless proofreading and
constant enthusiasm.

Forgive Me Father For I
Have Sinned

Driving In Cars With
Gods

The Rules of
Engagements

Drowning In The Bath
Tub

The Eve Of The
Wedding

PART I:
VALKYRIE LIFE
Glory Be

The sheets smelt of chemical lavender,
of him and of her. The sun smugly peeked its way through the gap in
the curtains, a voyeur on her weakness: her reversion to type. The
bastard illuminated sweat stains, other stains and tear stains.
These were tears that no one need know about but whose soft outline
clung maliciously to the pillowcase. She could no longer feel the
pain that these tears were caused by but they came all the same.
Glory was unusual for an immortal: she could cry. Or perhaps all
gods could cry, but they didn’t like to admit to it. Glory turned
on her side and inhaled with the spite of a goddess who had not
woken up on the wrong side of the bed but in the wrong bed
entirely. She was mad at the bed’s other occupant. Although she
could never be as angry with him as she was with herself. Another
one, another notch for the bed post, any more and it would come
down with a great yell of timber; too many little chips away at it
had made for structural unsoundness. Not that she cared, because
she really didn’t. Glory was furious in general, the whole fucking
universe made her want to scream and burn things.

Glory got up
from the bed surreptitiously and found enough of her clothing that
she could leave the house in a presentable state. She quietly shut
the front door behind her and looked about the street for a black
cab to no avail. The air was wonderfully brittle and in that
probing dawn she thought she’d walk a little of the way home to
gain some clarity, or something. She had received a text on her
phone that she didn’t know how to deal with, from someone she
hadn’t spoken to for a millennium. It was an honest bolt out of the
blue. Glory spent a good five minutes contemplating how easy plants
had life before she spotted a taxi, hailed it and sat like a queen
in the back seat as it hurtled eastwards. To Glory’s delight she
found that the driver, Reginald, was a talker. Glory found taxi
drivers utterly fascinating.

“So you’re out
late, have you been to a party love?” The poor man was very nice
and yet he was about to get the brunt of her latest existential
crisis.

“Life is a
party, is it not? We lurch from drink to drink, from awkward small
talk to baring your soul to a total stranger so that for one night
they see you: everything else in the middle is an unnecessary blur.
I try to keep lurching from drink to drink perpetually. It shuts
the rest of it out.”

“Are you a
student love? You sound like you study an ology or something.”

“No I’m just
British.” Glory said with a knowing smirk.

“As we all
should be. Reginald, are you content with your existence?” Glory
asked as that happy little hackney carriage sped off carrying
within it the most honest conversation she had had in quite some
time.

Smoking fifty cigs a day
should in all likelihood kill you, but that merely requires you to
be killed by something as trivial as cancer. Two immortal girls
leaned against a small house in a small village in some small
country that happened to have a large amount of untapped oil.
Littering the ground around them could be found the chief cause of
Imperial Tobacco’s last quarter profits. Now one could have called
this pair beautiful, but that would be distracting from their very
many more useful talents, besides beauty isn’t a talent it is
purely a happy coincidence. There are many valuable things that
these two were good at such as maiming, butchering, downing tequila
and generally not taking any bullshit from anyone.

Honour, the
younger of the two, was staring into the mid-distance as those who
are still a little tipsy from last night’s sixteen bottles of port
are want to do. Her hair was dark and her eyes wide set. Like her
companion, Honour wore the standard issue black boots, black
leathers, and black bullet proof jacket of Valhalla. Valkyries are
not subject to the mercy of human bullets but it had been decided
by Freya, goddess of war and ultimately their boss along with Odin,
that they needed to look the part if nothing else. Honour openly
enjoyed the outfit as she thought it made her look like the heroine
in a bad movie. Honour’s commanding officer was standing serenely
calm against the wall of the house. With a cigarette in her left
hand, Liberty leafed through the papers on her Valhalla standard
issue clipboard with the other. Liberty was an old hand at this
death nonsense. She had joined up some five hundred years or so ago
to avoid the aching boredom of Olympus and the constant unwarranted
attentions of its male (and sometimes female) inhabitants. Liberty
was one of those girls who would cause traffic jams, bar fights and
small flotillas to set sail, but far more importantly she could the
see the future, well usually.

Honour glanced
up from the empty space she had lost herself in “Where is Valour?
I’m still drunk. I make poor decisions when I’m strung out like
this. The struggle is real.”

Liberty looked
up momentarily at her comrade and continued checking her lists –
there was more likely a crossword hidden in their somewhere – and
said “You’re always still smashed so what does it matter; plus I’m
in charge what with Glory on a jolly so I get the blame when things
go tits up.”

At the casual
mention of tits Honour smirked a little “True, this isn’t proper
warfare anyway. So some mortals get blown up by a few nutters, this
isn’t Waterloo. It doesn’t matter a jot. There’s no honour in this.
No one will write moving poetry about this, it isn’t the Charge of
the Lightening Brigade.” “The Lightening Brigade?” Liberty shook
her head “Kid, firstly you’ve got to let that go, it was your first
week and we all screw up constantly at the beginning. If you
weren’t good in the first place we would never have let you into
Unit 401, you have to be rather phenomenal to get in. Secondly all
conflict matters no matter where it is.”

“Yeah well, I
suppose.” Honour perked up slightly at the prospect of some gossip
“Oh, where did you disappear to last night by the way? You missed
Valour giving a satyr a lap dance in The Sportsmen’s Arms, it was
way too funny. You buggered off after you got that phone call. It
wasn’t a certain freak show god of music and the sun was it, who
might happen to be called Apollo? You’ve met him before I think,
has a thing for teenage boys. Bit of a mentalist who stalks you?
He’s hot but also a pathological killer/serial rapist. You know,
that guy.”

Liberty ignored
the question for an awkward ten seconds before she finally looked
Honour squarely in the eye with the steely titan stare she was born
with “What time is it?” Liberty put out her cigarette as Honour
looked at her watch. Honour still wore a watch.

“Great, only a
couple more minutes. So I’ve got five potentials on here for this
drop. Four insurgent rebels or whatever they are. I am pretty sure
their lot are ‘religiously’ motivated or at least what passes for
it these days, either way they’re wankers so I’m saying no
automatically. I ended it with Apollo again, for good this
time.”

“I hope you
have dumped him, he’s a bellend. I’m not surprised that Glory won’t
let him in the house. What about the fifth mortal?”

“Well we shall
see. It’s this house.” Liberty gestured towards the building
opposite. The sun’s errant light hit the top of the house as they
opened the door, walked into the second room and saw the boy
sleeping beside a younger brother. His mother was asleep on the
other side of the room with an infant. Liberty and Honour solemnly
paused for a moment before four men burst through the door yelling
at the family. The boy woke and stood his ground as the men tried
to assault his mother.

“I like this
one, spirited, needs training but he’ll do” Honour said as the boy
was killed.

“Excellent. I’m
sure we can put him through his paces in Valhalla. That elf that
Valour was talking to was cute. Elves can be clingy though.”

A few hours later Glory was
to be found in a village hall somewhere in England. Glory was as
you would expect: tall, strong and devastating. Her hair was long
and her dark eyes sharp. She was the sort of girl who always said
no and meant it, but would herself never take no for an answer.
Glory wore a pair of heeled ankle boots, tight jeans and a guy’s
shirt (she couldn’t be bothered to remember whose it was). Slung
over her shoulders like a cape was her favourite leather jacket,
and as always she wore a pair of sunglasses that she used either to
avoid eye contact or to delicately hide her comedown. That day she
wore them for both reasons. Glory was a walking Freudian
casebook.

The Day of the Donald by Andrew Shaffer
Blood Waters 1 : The Boy From The Sea by Eve Hathaway
Active Shooter by Eduardo Suastegui
Adrienne deWolfe - [Wild Texas Nights 03] by Texas Wildcat
Monstrous Races by K. Jewell
The Embers of Heaven by Alma Alexander
the Tall Stranger (1982) by L'amour, Louis
Heather Graham by Hold Close the Memory
Jack Strong: A Story of Life After Life by Mosley, Walter
Unexpected Mates (Sons of Heaven) by Lyons, Brenna
Our partner