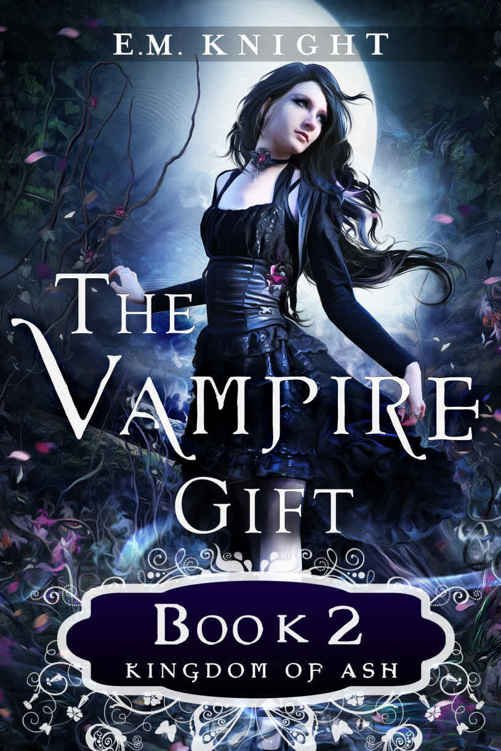 Want More of The Vampire Gift?

To a dazzling new vampire series for fans of Bella Forrest’s SHADE OF VAMPIRE.

The Vampire Gift 1: Wards of Night

For an updated list of books, and to see the latest dates for my upcoming releases, check out my website:

You can also sign up for my
New Releases Newsletter
to get a notification the day a new book comes out! That way you don’t miss anything new. And don’t worry – I never send any spam.

This is a work of fiction. Names, characters, places, and incidents either are the product of the author’s imagination or are used fictitiously, and any resemblance to actual persons, living or dead or vampire, events, or locales is entirely coincidental. The publisher does not have any control over and does not assume any responsibility for author or third-party websites or their content.

Cover art by B. Wagner

THE VAMPIRE GIFT 2: KINGDOM OF ASH

A daring rescue has freed Eleira from The Crypts.

But that rescue has come at a great cost, stripping Eleira of her humanity and opening up the battlelines between the world's most powerful covens.

Now, as a creature of the night, Eleira has no choice but to return to The Haven. She must discover the truth of the dark prophecy surrounding her life and learn the extent of her new powers... all the while navigating the treacherous landscape of the heart.

But as the Queen awaits Eleira's arrival, discord grows amongst the The Haven's vampires. The threat of war, of outside attack, has them questioning their monarch's ability to rule... and the necessity of The Succession.

Eleira was supposed to be their savior. Her newfound strength instead makes her a threat. None are eager to welcome Eleira with open arms... and all will fight to bring her down if they think it will help them get ahead.

I do a slow circle of the room at the top of the tower, trying to keep my breathing calm and steady.

It’s hard. The only reason I’m managing is because of all the meditation I’ve done over the last century. Otherwise, I’d be going crazy.

I’ve never been to this part of Mother’s castle before. I’ve seen the tower’s angled spire, but it has always been off-limits.

For the first time, I understand why.

Silver
. Hoards and hoards of silver, lining all the walls, piled as jewelry and cutlery on the ground, spilling out as coins and necklaces and rings from intricately-carved chests. Ancient suits of armor stand erect around me, made entirely of the accursed-metal.

The mere sight of the room would fill any vampire with dread. Being
locked
inside…?

I lose track of the safe path along the room and misplace a step. As soon as I do, enormous pain crashes into me, coming from all sides, coming almost as radioactive waves from the silver.

I cry out and, with extreme effort, pull myself back. The pain subsides. I’m okay—for now.

When Mother first imprisoned me by latching that silver collar around my neck, I thought she’d put me in a cell underground. I thought she’d keep me where we keep the prisoners awaiting trial—though with her at the helm, the trials had never been more than theatrical shams. If a vampire of The Haven did something to warrant being held prisoner, his fate was all but decided: he would become one of The Convicted. No matter what.

So in a way I was relieved when we emerged above ground. I wish I could say it was a surprise that she would hold me hostage… but Mother never hid her disdain for my choice to stop feeding on human blood. There was a time she was afraid the other vampires would see it as weakness pervading through the Soren family. She believed my decision could start a revolt.

That didn’t happen. I can thank James and Raul for that. My two older brothers were her bastions of strength, and with Mother leading, none would dare rise against her.

Except, of course, her cousin Rebecca. Yet Mother put a very effective stop to that by… by…

I can’t even think it.

I look around the room, at the gleaming metal reflecting the candlelight… and continue my careful path in that slow, precise circle.

Silver usually does not have this sort of radiating effect. In most cases, it’s simple: either the metal touches our skin, and it burns—or it does not.

But I’m sure Mother cast one of her spells on the items surrounding me so that just being in the room is near agony.

If I stood still it would drive me crazy. The reverberations through the air feel as jarring as jackhammers pounding at my temples. But by moving in the path I found, I manage to ease the worst of the silver’s effects on me.

It all stems from Mother. The other vampires of our royalty look to her for guidance and leadership. It’s part of the natural hierarchy. They see her growing restless, and they grow restless, too.

Abruptly the doors slam open. A gust of wind blows inside.

I jerk that way.

Mother stands on the threshold, the wind emanating from her and somehow taking the worst of the silver’s effects away.

I try to summon up hatred for her… but I cannot. That she would turn against me and Raul doesn’t strike me as a great surprise. She was desperate after having lost Eleira. Desperate people do desperate things.

Besides, it’s not so much hatred that swells through me, but… pity. Pity that she would be so power-hungry as to go to these extremes.

“Enjoying yourself, are you?” she asks, her voice a sing-song mockery of its usual self. The wind dies down, but the effects of the silver remain lessened. “I never understood you, Phillip. How you could be so calm, so complacent, so…”

She narrows her eyes. Both her hands go out to grip the sides of the doorway.

“Yes,” she admits grudgingly. “Peaceful.” She steps into the room, her elegant blue gown flowing around her legs as she walks. “It’s not in our nature to be peaceful, my sweet.”

The hairs on the back of my neck go up. She’s never addressed me using that term of endearment before. Raul, yes. James, sometimes. But never me.

“Come.” She holds out her hand. “I think you’ve spent enough time here. Don’t you?”

She laughs. “You’re jumping the gun. Raul and Eleira have not returned yet.”

A nasty feeling rises in my throat. Enough time has passed for Raul to find Eleira. It feels like I’ve been here for days.

“Then where are we going?”

I follow her down the long, icy hall of her castle. Empty canvases framed in gold hang on the walls.

They’re an eerie reminder of what she’s capable of.

Nothing—
nothing
—could be worse than severing a soul from it body. It’s a crime against nature. If the thought of feeding on human blood makes me ill, what Mother has done to every one of these vampires in the paintings… the
way
she did it… it makes me want to throw up.

We walk to a curling staircase leading down. Mother glances back at me. “You’re not stupid enough to try to run, are you?” Out of nowhere, that silver collar she’d flung around my neck appears in her hands. “Please tell me you’re not. You don’t know how it pains me to use this…
device
… against my own flesh and blood.”

“Good.” The collar disappears up her sleeve. “That makes me so happy.”

We descend the narrow stairs. At first I think we’re going to the ground floor. But then Mother takes me lower, deeper into the earth.

I begin to grow wary.

At the very bottom is a set of dungeon doors. Morgan shares a conspiratorial look with me. Then she opens them.

My heart sinks when I see what’s on the other side.

Patricia and Jacob are hanging limp from the walls. Silver gauntlets bind their wrists and ankles. Their heads droop low, but Patricia manages to look up—weakly—at our entrance.

Mother pulls the doors closed with a bang. The sound echoes through the dark, rocky chamber.

As soon as that happens I sense we’re not the only ones here. Sure enough, from behind a jagged column emerges an ensemble of the Queen’s personal guard.

There are six of them altogether. I scan the faces. Two of the six I know from before, but the other four are new. Their Commander, identified by the gold stitching on his black coat, is no one I’ve
ever
seen before inside The Haven.

“You’ve changed your guards,” I say. My mind searches for an explanation. Mother’s previous guards had been stable for decades. They had the utmost loyalty to her. “Why?”

“I was hoping you’d be able to tell me that,” Mother coos. “After all, it was you and Raul who started the fire in the village—along with these two accomplices.”

She casts an arm toward Patricia and Jacob.

“What does the first have to do with anything?” I ask.

“Well…” she taps her lips. “Four of my most trusted guards were found dead in the aftermath.” She turns to me. “They didn’t burn. They were
murdered.
”

A wave of shock passes through me.

Who would kill four vampires?

“These two,” Mother continues, walking closer to the husband and wife pair, “have proved surprisingly stubborn in admitting their guilt. But that’s not a problem. Because, down here, my word is law… and the law finds them guilty of
murder!
”

Babylon's Ark by Lawrence Anthony
Black Site by Dalton Fury
Scalpel by Paul Carson
3.5 Roasted in Christmas River by Meg Muldoon
Growing in Love with Her Mail-Order Husband by Wilson, Mandy
The Michael Eric Dyson Reader by Michael Eric Dyson
The Way Some People Die by Ross Macdonald
Highland Steel (Guardians of the Stone Book 2) by Crosby, Tanya Anne
The Main Chance by Colin Forbes
She's Got Dibs by Nuest, AJ
Our partner