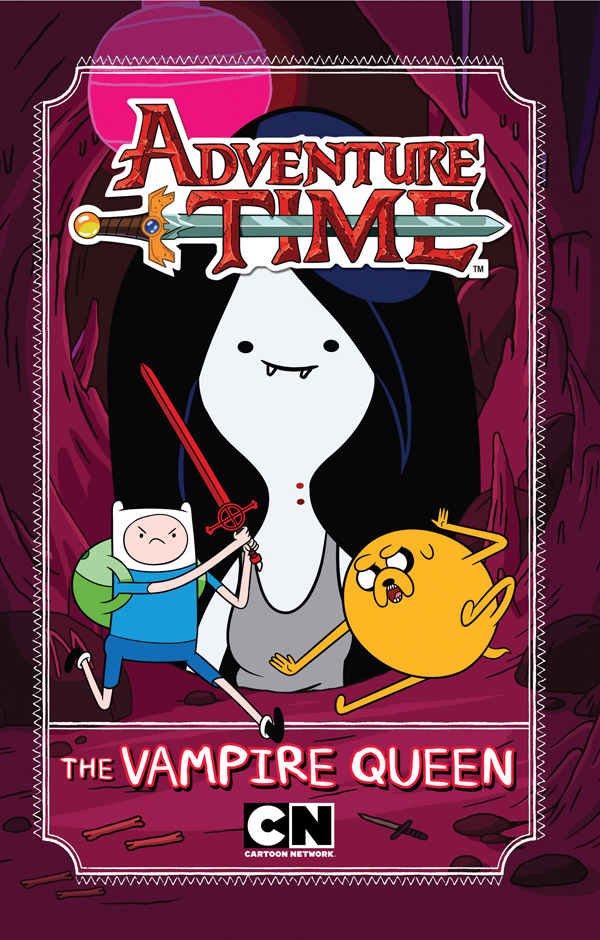 CHAPTER 1 TALES FROM THE TREEHOUSE

CHAPTER 7 MARCH OF THE UNDEAD 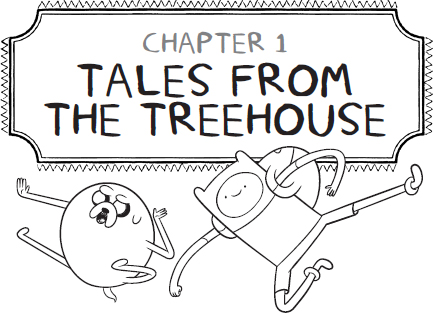 Thunder? Lightning? Relentless rain? Oh, yeah! The dark, stormy night in the Land of Ooo created the perfect excuse for a couple of adventurers to lounge around in their treehouse and tell spooky stories.

Luckily, Jake’s talents went way beyond his ability to shape shift into any form imaginable. He was also a canine master of the tall tale.

‘…And as it waded through the carnage it had wrought,’
Jake creepily narrated his story to his hypnotized friend, Finn,
‘the vampire smashed their skulls –
JUST FOR THE FUN OF IT!
’

‘No way!’ Finn gasped, staring at the red goo oozing out of the jam doughnut that Jake had just pounded.

‘Yes, way,’ Jake replied as he waved the dripping doughnut in Finn’s face.

‘The vampire hunched over its victims and breathed their vaporised blood mist,’
Jake continued.

‘Aw, Jeez,’ Finn protested. ‘Is this stuff you’re saying true? Or are you just trying to mess me up? You have to be honest.’

‘Oh, it’s true, man,’ Jake said, licking jam from his muzzle. ‘I heard it through a reliable source.’ 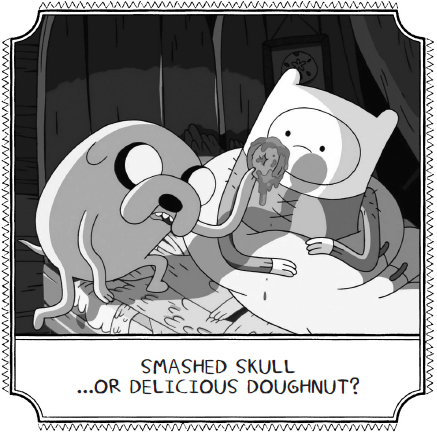 Finn crawled into his sleeping bag when Jake told him that his reliable source had also said that the very tree they were perched on was haunted.

‘Good night,’ Jake groaned in a ghostly voice. Then he disappeared, taking the only candle in the treehouse with him.

Finn tried to get comfortable in his sleeping bag, but it was an impossible task. The eerie glow of the moonlight made shadowy shapes on the treehouse walls. The wind rattled the tree’s branches, and a strange squeaking noise echoed through the room.

Finn looked down and was surprised to see a green-striped worm inching across his bed. The worm stood on its tail. Its head began to glow. Finn picked up a book and tossed it at the intruder.

‘No worms on the bed!’ he yelled. He then rolled to his side and tried to sleep. But just as he closed his eyes, he heard a tapping on the window. When Finn saw that it was just a tree branch, he breathed a sigh of relief – at least until the dark figure of a lady monster appeared below the branch.

‘Jake! Jake!’ Finn called, climbing down the ladder. ‘I saw someone outside the window! It must be the vampire, and I think we’re unprepared so I…’

‘Relax, buddy,’ Jake reassured his friend. ‘I made that story up. I was just trying to scare you.’

‘But you said you heard it from a reliable source,’ Finn reminded him.

‘I made that up, too,’ Jake laughed. ‘I was trying to scare you, and it worked.’

Suddenly, a clap of thunder boomed. A window burst open, and a gust of wind extinguished the flame on Jake’s candle. Now it was Jake’s turn to scream. And his scream was bloodcurdling.

Finn looked out the window.

‘No one’s outside,’ he observed. ‘It was just the wind, scaredy cat.’

Suddenly, a duffel bag dropped to the floor in front of them.

He shined his flashlight on the bag. It was small and green and didn’t look spooky or out-of-the-ordinary in any way. But that was only because Finn didn’t have any idea who the bag actually belonged to. It didn’t matter, though. As Finn raised his flashlight toward the wall, he was about to meet the bag’s owner. Unlike the bag, the owner was completely out-of-this-world! 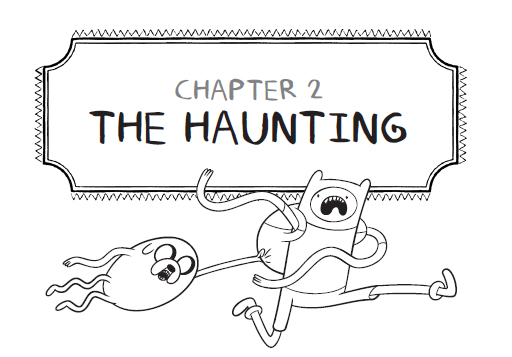 When the beam of Finn’s flashlight reached the ceiling, the creature hovering there hissed and bared her pointed canine teeth. It looked like Jake’s reliable sources were reliable after all. The treehouse was haunted, and by a vampire, too.

‘Are you going to smash my skull and breathe my blood mist?’ Finn asked, trembling.

‘Calm down, weenies,’ Marceline laughed. ‘I’m not going to do that.’

With a snap of her fingers, the vampire queen relit all the candles in the treehouse.

‘Sometimes I do,’ Marceline confessed. ‘But it’s not the blood that I like. It’s the colour. I eat shades of red.’

Marceline swiped her hand across Finn’s neck and magically conjured up a ripe, red strawberry. She sank her pointed tooth into it. When she was done, the strawberry was a sick shade of grey.

Marceline shoved the colourless fruit into Finn’s mouth. She then floated across the floor to her duffel bag. She yawned and let her head hang down. 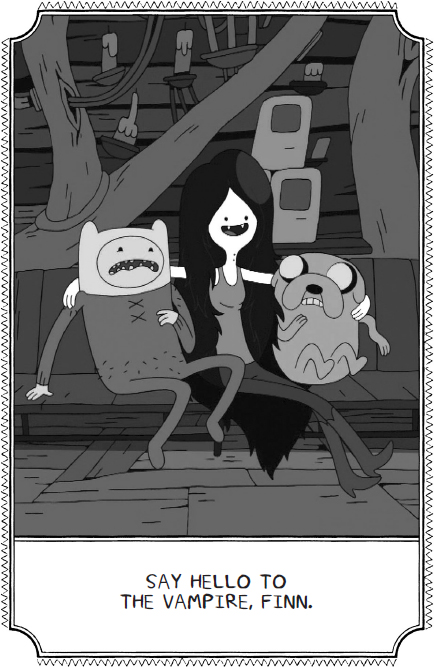 ‘Wow, I am exhausted,’ Marceline told the adventurers. ‘I’ve been travelling all over the Land of Ooo, and I’ve seen stuff that would really make you say, like what?’

‘I found a school of goldfish beasts,’ Marceline boasted. ‘And I fooled around in the fire kingdom.’

Marceline spread her fingers, revealing something in the palm of her hand.

The vampire queen made a fist, squeezed tightly, and then opened her hand to reveal the contents. The nuts had somehow turned into tiny, colourful creatures. 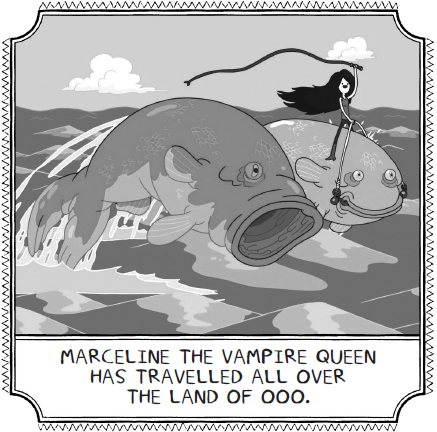 ‘Yeah, thank you for not sucking our blood,’ Jake added.

‘You guys seem cool, too,’ Marceline yawned. ‘But as you can imagine, I’m really tired. So you two should probably get going.’

Marceline pointed to a large letter M carved into the treehouse wall.

‘M for Marceline,’ she explained. ‘I carved it in this tree years ago, long before you two rascals started squatting here.’

Marceline put her arms around Finn and Jake and lifted them into the air. Before they could blink their eyes, the best friends were standing outside in the pouring rain.

‘Seriously, guys, thanks for keeping the place warm for me,’ she said, as she flew back to the treehouse. ‘Like really great. Thanks. Good night.’

Marceline slid through the open window.

‘She can’t kick us out of our house!’ Finn replied angrily. Finn started pounding the treehouse door with his fists.

‘Get down here, lady, and fight me!’ he shouted.

Up in the window, Marceline laughed and took a bite of one of Jake’s doughnuts. Then she dropped two bags full of Finn and Jake’s belongings to the ground and slammed the window shut.

‘Dude, if half the stories I’ve heard and/or made up are true, vampires will kill you,’ said Jake. ‘There’s no question.’

‘But what about our home?’ asked Finn.

‘A vampire took it!’ Jake replied matter-of- factly. ‘We should go house hunting. Bag us a new house.’ 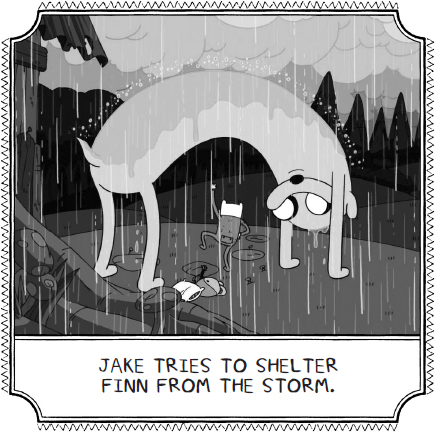 The Infected 1: Proxy by P. S. Power
The Seance by John Harwood
Revenge by Joe Craig
At Least He's Not On Fire: A Tour of the Things That Escape My Head by Philbrook, Chris
Aphrodite's Flame by Julie Kenner
Fantasy Boyfriend (A Tattooed Bad Boy Romance) by Stone, Vanessa
Unholy by Byers, Richard Lee
Team: Alpha (Knights of Ares) by James, Honor
This Is What I Want to Tell You by Heather Duffy Stone
Pride Over Pity by Lowry, Kailyn, Wenner, Adrienne
Our partner