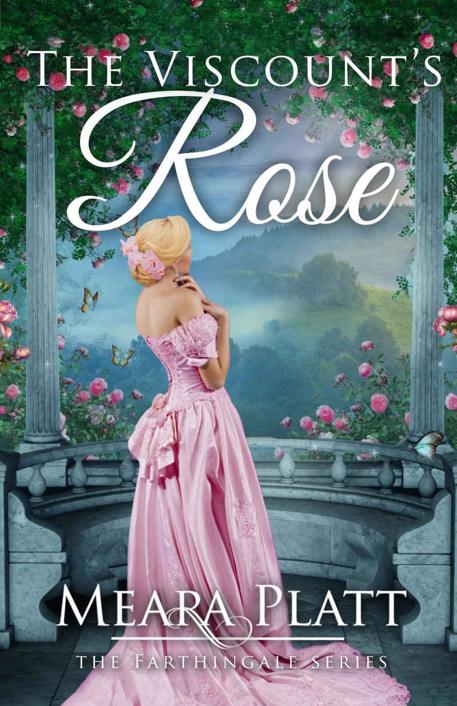 of her Farthingale novella,

If You Kissed Me.

to grab your free copy:

This is a work of fiction. Names, characters, places, brands, media, and incidents are either the product of the author’s imagination or are used fictitiously. Any resemblance to similarly named places or to persons living or deceased is unintentional.

To Samantha and Laurel, who made this happen

Sneak Peek of If You Loved Me

“Enough, Nicola! I’m not interested.” Lord Julian Emory, the tenth Viscount Chatham, stifled a groan as he assisted his sister down from his carriage in front of Number 3 Chipping Way, the stately residence of her best friend, the one whose given name he couldn’t recall at the moment because Nicola always referred to her as Rolf. Who would call a young lady that anyway? It was the sort of name one gave to a dog.

Nicola frowned at him. “She’s wonderful, as are all the Farthingales. You’ll agree once you meet them. Rolf is so much more clever than any debutante making her come-out this season. Much nicer than those supposedly elegant ladies you keep fast company with. Please come in with me, Julian.”

He was about to decline, as he had every day this past week, when a small explosion suddenly rocked the quiet street. “Nicola, get back in the carriage. Now!”

He tossed his sister inside without waiting for her to obey and ordered his coachman to drive a safe distance away before leaping over the gate, for he’d heard several high-pitched cries for help coming from the garden of the very townhouse his sister was about to visit. He ran toward the screams and noticed a small funnel of black smoke rising from a makeshift structure in the far corner of the garden.

Two young girls were being held back by two older women, but the girls were obviously struggling to break free and run toward the danger. He couldn’t allow that to happen. “Is anyone in there?” he demanded to know, removing his jacket. He intended to use it as a blanket to extinguish any spreading flames, although the fire appeared to be contained and dying out on its own.

“Our sister’s in there,” one of the girls replied, gazing at him through tearful blue eyes.

“Her kiln exploded,” the other girl said, gazing at him through identical blue eyes. Had his vision suddenly blurred? He was seeing identical faces.

No matter, he’d sort it all out once he’d rescued their sister.

Julian placed his jacket protectively over his nose and mouth, dropped to a crouch, and nudged open the door, which had almost blown off but was still hanging on one hinge. The black funnel of smoke quickly dissipated as it wafted outside, confirming the fire had burned itself out, leaving only smoke in its wake. He had only to find the sister.

Don’t let her be dead or injured.

He’d engaged in enough battles on the Peninsula to understand the damage that wounds caused. The remnants were not only visible scars but invisible ones as well, the sort that pierced deep under one’s flesh and festered.
Damn.
He didn’t even know the young innocent’s name to call out to her. “Miss? Can you hear me? Where are you?”

His eyes watered as smoke and dust enveloped him. He wasn’t halfway into the small enclosure when he heard a soft moan coming from behind an overturned table. The girl was alive but in what condition? He approached and saw that her ankle was pinned under the table, so he quickly righted it and then knelt to check her for broken bones before he dared move her. The bigger risk now was a break, a bump on the head, or other unknown internal injury.

He brushed a few stray locks off her forehead and spoke gently, relieved to feel no lumps forming on her brow. “Can you move your fingers?”

“I… I th-think so.” She appeared to do so without much effort.

“Now raise your arms, one at a time.” Again, she managed with little effort. “I’m going to touch your legs, don’t be alarmed.”

“Nothing will alarm me after this,” she said, punctuating each word with a cough. Even so, the gentle amusement in her raspy voice sent an unexpected warmth coursing through his blood. There was a sweet, melodic quality to her voice.

“Good, because I need to make certain you have no spinal damage and then get you out of here before the roof collapses atop us.” He touched her leg. “Can you feel my hand on you?” Because he sure as hell could feel her soft, shapely leg, and that warmth flowing through his blood had just turned fiery.

He cleared his throat. “I’m going to take off your slippers and I’d like you to wiggle your toes, one foot at a time.”

She was able to do as he asked but winced as she tried to move her injured ankle, which appeared to be the only damage she’d sustained. Of course, she’d inhaled some smoke. That was worrisome depending on how much she’d taken in. “Put your arms around my neck.”

He lifted her into his arms while she did so and carried her out into the cool, fresh air. She coughed again as her lungs took in the cooler air and—
merciful heavens
—he felt each heave of her ample breasts against his chest.

Fiery did not begin to describe the heat now raging through his body.

“Who are you?” he asked. The question came out more sternly than intended, but it couldn’t be helped. She was turning him inside out, and he didn’t know who she was nor could he see her clearly because smoke still stung his eyes. She did not reply.

A cool, gusting breeze surrounded them now that they were outside. The bright sunshine caused his eyes to tear up worse than they had done in the shed, but he managed to set her down on the grass under a shade tree without stumbling. He wiped his eyes with his sleeve, which wasn’t the cleverest idea, for his sleeves were covered in soot and now so was his face.

He knelt beside her, and the little girls with identical faces fell to their knees on the opposite side of their sister, excitedly chattering and obviously relieved she was safe and relatively unharmed. “I didn’t hide my box of explosives in your kiln, Rose,” one of them said. “I’d never do anything so foolish.”

She nodded. “It is, sir. Thank you for saving me. May I ask—” That was as much as her raspy voice managed before she erupted in a fit of coughing that alarmed the small crowd of servants who must have run out of the house when they heard the noise and saw the fire. They were now gathering around him and Rose.

A tall, older man seemed to be in charge of the worried staff and was, no doubt, the Farthingale family’s head butler.

“Pruitt, she needs something to drink,” one of her sisters said, wringing her small hands together in worry. “And wash cloths to clean the grime off their hands and faces. We mustn’t track soot all over this lovely new house after Mama worked so hard to put it in shape.”

“Right away, Miss Lily.” He sent one of the maids to attend to the chore and then sent two others to the kitchen to bring out refreshments. “Will tea and cakes do for all of you? Sir, shall I send out something a little stronger for you?”

“Tea will do for me.” He needed to keep his wits about him, for he had yet to regain control of his body despite the fact that he was no longer holding Rose.

Pruitt assigned several footmen the task of securing the rubble now that the fire was out, and once assured that Rose was all right, he ordered the others back into the house. Only the governesses and Rose’s sisters remained beside them. “I’m Dillie,” one of the girls said, smiling at him. “This is my twin, Lily.”

“Emory? As in Viscount Chatham? Lady Nicola’s brother?” Rose attempted to raise herself to a sitting position, but the movement caused her to cough again.

Alarmed when the coughs suddenly mingled with wheezes, he drew her into his arms and placed a hand on her chest to feel her heart, which was beating wildly but not in a haphazard pattern that would signal something more serious than a cough. Her intake of air, despite her wheezing, appeared adequate.

After a frighteningly long moment, she calmed.

Dillie stared at him and then turned to her twin. “Why is his hand still on Rose’s breast?”

“To check her lung capacity, of course.” Lily frowned. “What did you think he was doing?”

“Girls, I’m right here. You can ask me… er, no. Lily just answered the question.” Although it didn’t explain why his hand was still on Rose’s breast or why he was reluctant to draw it away. “Who is Rolf?”

Perhaps he ought to meet that sister after all. Nicola had been urging the introduction for several weeks now. Was the girl anywhere near as beautiful as Rose? Not that he’d actually taken a good look at Rose. No, his body had responded to hers in the dark. Quite another matter to study the girl by the bright light of day when her flaws would be glaringly obvious.

He finally managed to move his hand off her chest, but kept it loosely poised at her waist, easily convincing himself that she required his attendance while still unsteady and trembling from her ordeal.

He required something altogether inappropriate.

Why her? Why now? No matter, his inexplicable bout of lust for the girl would soon pass. Even if it didn’t, he was never going to act upon it. Still, he was curious to study the face attached to that exquisite body. He spared her a glance… more than a glance.

Despite the smudges of soot on Rose’s cheeks and tip of her nose, there was no mistaking her beauty. She had lively blue eyes, a deep, ocean blue that glistened with mirth and intelligence. Her hair was a riotous tumble of honey-blonde curls. She had a generous, sensual mouth. “You asked about Rolf,” she said, interrupting the wayward thoughts he ought not be having.

He nodded. “Is she your sister?”

Her sisters began to giggle.

Yes, his sister had told him repeatedly, only he hadn’t been listening. His heart slammed into his chest. “You?”

She nodded. “Rose Olivia Lorelei Farthingale. Rolf to my friends.”

Faith and Love Found by Claudia Hope
Tell Them Katy Did by Victor J. Banis
Jonathan Moeller - The Ghosts 08 - Ghost in the Mask by Jonathan Moeller
The Steel Harvest by J.D. Miller
The Cyber Chronicles Book III - The Core by T C Southwell
Alyx - Joanna Russ by Unknown Author
The Tomorrow-Tamer by Margaret Laurence
How Firm a Foundation by David Weber
Play Me Harder by Garon, Rachel
Catwalk by Melody Carlson
Our partner