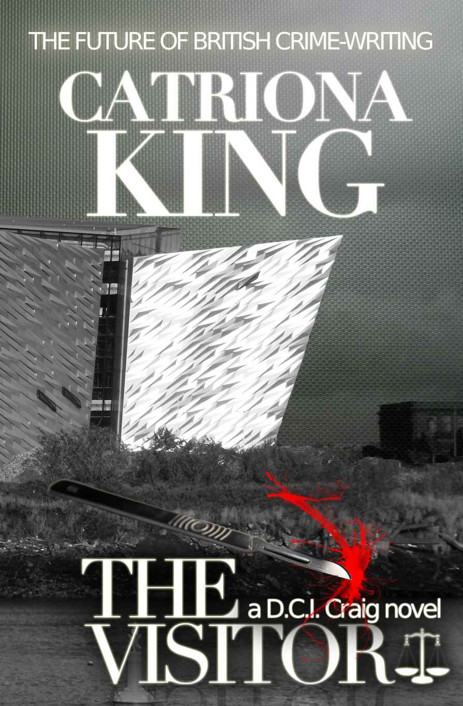 Praise for A Limited Justice:

“a fantastic achievement... There is a new star on the scene... Belfast needs its own detective - and in D.C.I. Marc Craig it now has one”

“this is what crime books should be like; realistic, believable and slightly unnerving”

Praise for The Grass Tattoo:

“An excellent read with good characters and absorbing story line...”

“With A Limited Justice, Cat King was the 'new kid on the block', now, with The Grass Tattoo she's proved she can stand shoulder to shoulder with the best.”

No part of this book may be used or reproduced in any manner whatsoever without written permission of the author or Crooked Cat Publishing except for brief quotations used for promotion or in reviews. This is a work of fiction. Names, characters, places, and incidents are used fictitiously. Any resemblance to actual persons living or dead, business establishments, events, or locales, is entirely coincidental.

Catriona King trained as a Doctor, and as a police Forensic Medical examiner in London where she worked for many years. She worked closely with the Metropolitan Police on many occasions. In recent years, she has returned to live in Belfast.

She has written since childhood, fiction, fact and reporting.

‘The Visitor’ is her third novel. It follows Detective Chief Inspector Marc Craig and his team through the streets of Northern Ireland and beyond, in their hunt for a killer.

A fourth novel in the D.C.I. Craig series is nearing completion.

Thanks to my brothers for growing up amongst their energy and fun.

I would like to thank Crooked Cat publishing for being so unfailingly supportive and cheerful.

And I would like to thank all of the police officers that I have ever worked with, anywhere, for their unfailing professionalism, wit and compassion.

The man stood by the window and watched the builders outside. They’d been modernising the hospital for months and progress was slow.

Dr Katy Stevens searched her notes for his daughter’s maiden name then hesitated, uncertain of what it was. So she risked a generic ‘Mr?’ hopeful that he would take the hint and fill in the rest.

Her hint was ignored, and instead, “Who wants to know?” came back in a voice that was pure Belfast. It had a deep-smoked rasping quality, and the man who owned it turned quickly, as if to protect his back.

His creased face and single pierced ear topped a neck with tattoos the length of one side. His bare, tanned forearms carried more intricate markings; a supermarket barcode the clearest. So far, so Belfast. The real surprise was that despite doing nothing aggressive, threat emanated from his every pore. It filled the room with a tension that festered in the brief silence.

After a moment he noticed her stethoscope and smiled, without easing the chill.

“The nurse said you saw our Evie, Doc. Will she be all right? And what about the ba? That’s my first grandchild you know.”

His bonhomie should have relaxed her, but instead it had the opposite effect. Katy stumbled clumsily over her words. “Yes, yes, she’ll be fine…” She hesitated, before deciding that she couldn’t do another blank ‘Mr’.

The man gave a hollow laugh. “Don’t call me by that shite Murray’s name. I’m Tommy Hill.” His right hand shot out and shook hers sharply, dominance in its small grip. “She married him, not me. And I told her not to. He’s a waste of space.”

The room was in darkness when Evie woke, hearing a noise out in the corridor. She squinted at the watch her husband Brian had bought her for Christmas. Smiling at the thought of him with their new baby in two days’ time.

It was four o’clock in the morning and she was wide awake. Great. No-one had told her how boring hospitals were - her side-room felt like a prison. During the day there was company at least. But all you ever heard at night were bleeps going and babies crying. Or some poor woman screaming the place down. She was growing more grateful for Wednesday’s Caesarean by the day. She didn’t fancy a normal delivery one little bit.

She reached for the side-lamp and flicked it on, her eyes blinking as they adjusted to the glare. Then the door opened and she turned and smiled, glad of any company.

“I didn’t expect anyone at this time. Is it for more tests?”

“Everyone here’s so clever. You all do everything, don’t you?”

Her visitor smiled, leaving the question unanswered. Evie held her arm out obediently, watching as the plunger emptied the syringe. She’d become used to the drugs and tests 24/7, and her Mum said it was rude to ask questions.

“That should take effect soon, Evie.”

Evie smiled and reached for the remote, thoughtfully hitting the mute button. “Night-night then.”

An old Bruce Willis film was on Freeview. It was better than nothing. But it really didn’t matter, she wouldn’t see anything soon.

Her brown eyes closed softly and her right hand fell gently to rest, palm-up on the starched cotton cover. The remote control slipped down towards the floor, caught quickly by her visitor, just in time to keep the silence.

They held her hand calmly, curling her fingers over. And then stayed for a moment longer, leaning over the bed. Until Evie’s last breath left softly and they weren’t needed any more.

The Visitor smiled sadly, and then slipped out, mixing easily in the corridors with shift-workers; disconnected and anonymous. Then they left the hospital, nodding kindly as the ailing and their relatives passed by.

It was sad but it was necessary, and Evie had been chosen very carefully. No one had listened, but her father would make sure they did.

Marc Craig pulled his apartment door closed behind him, yawning as he walked towards the car. The boot opened remotely and he dumped his sports-bag amongst the detritus. Then he closed it again quickly, with a mental note to tidy up, sometime.

He’d been in the office till midnight, reading every inch of the Warwick file. But it had been worth it. The trial started tomorrow, and the truth was that, after months of hard work, it came down to these few days in court to get justice for Laura Warwick. It was the only chance they would ever have.

The sports-bag was a triumph of optimism over reality. There wasn’t a hope in hell he’d find time for the gym today, but it made him feel better to pretend. And you never knew; maybe no-one in Belfast would get murdered this week.

He climbed into the car rubbing his dark eyes, and turned the engine over sharply, heading down through Stranmillis towards the lively University Road. It was full of students already. Some liberated from exams, others whose tired young faces showed that they were still trapped. Optimistic banners outside the Student’s Union were advertising parties, pass or fail.

The radio weather girl was burbling on, telling everyone to expect a day of sunny drizzle. And she was right; the roads were slick with warm rain. But even so, the traffic past Botanic Gardens wasn’t as bad as usual. Its plants were flourishing in the damp spring sunshine, and a queue of eager tourists stood outside the main gate, eager to explore. A young man at the back was holding his girlfriend’s hand, blind to everything but her. Craig remembered being him once. He smiled, thinking of Julia’s visit next weekend and then shut the thought down quickly, before it seduced him.

He drove in the same lane for ten minutes, too busy with thoughts of the next day’s trial to concentrate on anything more complex than a straight line. The defence barrister, Doyle, was a tricky bastard. They’d need their best ‘game-faces’ on to deal with him. He’d tripped the police up before.

He’d just reached the Gasworks’ business park on the lengthy Ormeau Road, when the car phone rang angrily, pulling him from his thoughts.

“Yes, Nicky. What can I do for you?” He laughed at his P.A.’s regular morning call, five minutes from the office.

“Honestly, sir. It’s important today. Dr Winter rang and he needs an urgent meeting. You have Chief Superintendent Harrison at nine-thirty, so are you OK with eleven? He said you might want Inspector Cullen with you.”

“Did he give you a clue what it’s about?”

“Yes...” She winced, already regretting her next words.

“Sorry, but…There was a suspicious death at St Marys. About four hours ago.”

St Marys’ Healthcare Trust.
Damn.
Craig hated hospital cases. They were heart-breaking media fests. And he only hated one thing more than defence barristers. Journalists. He gave a heavy sigh.

“OK. Tell John I’ll be there at eleven. And ask Annette and Liam to make themselves available please. Thanks.”

The phone clicked off softly and he pulled hard left round Victoria Street corner, where the House of Fraser announced its presence in letters twenty-feet high. He sped towards Belfast’s Dockland sprawl, thinking quickly. It wasn’t like John to be urgent about anything. He was usually too calm, in his ‘old-school’ doctor way. This had to be important.

Within five minutes Craig was driving down Pilot Street, into Dockland’s Coordinated Crime Unit. That was the great thing about a small city, getting anywhere was quick. London’s gridlock had put years on him.

He held up his badge for the elderly gate officer and parked his aging black Audi in the first available gap, ignoring the privilege of his named space. Assigned parking was top of his ‘naff’ list. He was just pleased to park anywhere without getting clamped, after London.

The lift to the squad was deathly slow, punctuated by people clambering in at every floor, greeting each other like lost relatives. When he finally disembarked on the tenth, he tripped over an eager looking sixteen-year-old, whose ‘Sorry, sir’ words and voice gave her away as a nearer-twenty probationer. That meant it was attachment time.
Excellent.
Probationers rotated through squads for experience, and they were eager, un-cynical helpers, free at the point of delivery.

Mother, Can You Not? by Kate Siegel
Twerp by Mark Goldblatt
Welcome to Diablo Vista (Axl Dane #1) by Crow Gray
Reflecting the Sky by Rozan, S. J.
Double Wedding Ring by Peg Sutherland
The Death of Santini: The Story of a Father and His Son by Pat Conroy
The Incident (Chase Barnes Series Book 1) by John Montesano
Ten Degrees of Reckoning by Hester Rumberg
Forever Loved (The Forever Series) by Roy, Deanna
Fighting Temptation [Brac Village 11] (Siren Publishing Everlasting Classic ManLove) by Lynn Hagen
Our partner