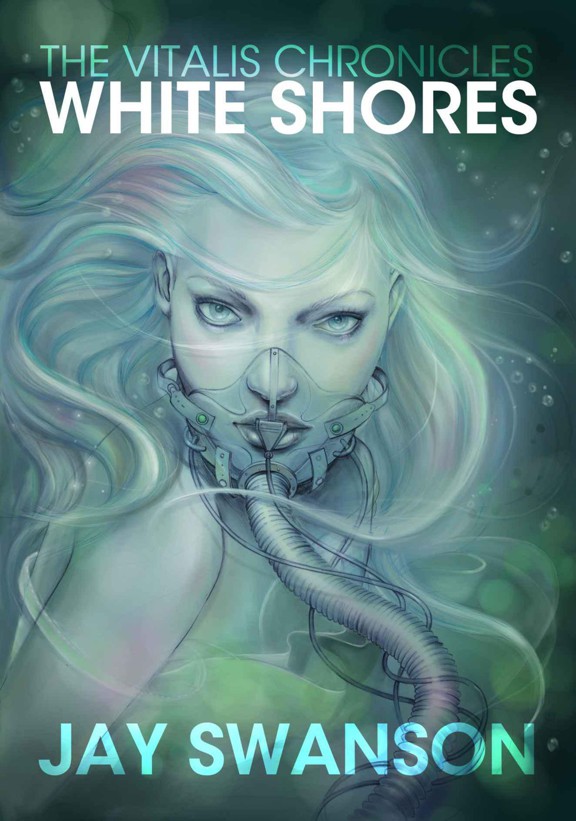 The Vitalis Chronicles is a fantasy trilogy by Jay Swanson, and is a work of fiction. The characters, incidents, and dialogues are products of the author’s imagination and are not to be construed as real. Any resemblance to actual events or persons, living or dead, is entirely coincidental.

Published by The Northern Range

To the people who brought

the right amount of inspiration

at the right times to make this possible:

Without your passion, mine would

have died before Ardin had a chance. 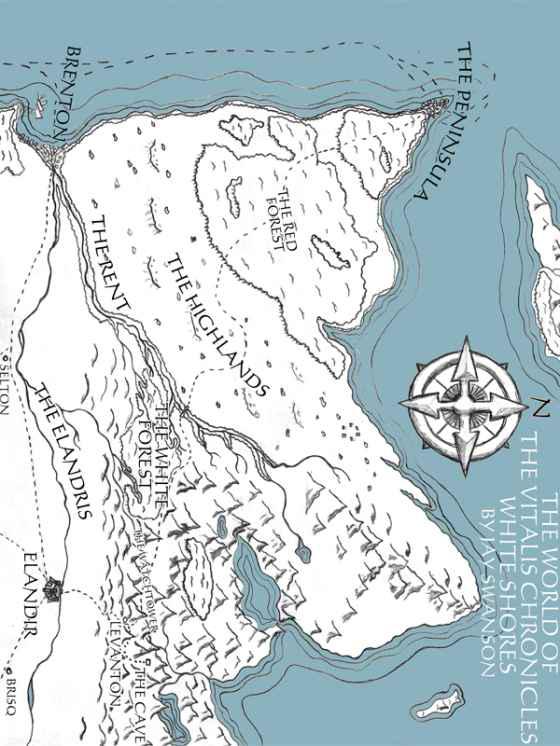 D
ON VITALIS SIGHED
as the sun set over his rusting farm equipment. A dozen failures flashed before him in time with the flickering light of evening. The signs of time's passing were not lost on him, not in the rust, nor the oncoming night, nor the illness that crept up from his crippled leg.

He was getting weaker, and while his family seemed not to notice the advance of his illness, he couldn't deny it any longer. Not to himself, and not to his wife. She knew the future weighed heavily on his mind and was wise enough not to prod his fears.

Soldiering, logging, farming...
He counted his numerous attempts at profession on his fingers.
What has it all brought me to? What does all that hard work leave my family if not futureless?

His sons came bounding through the large space between their home and the forest that surrounded Levanton. They shouted and threw sticks at each other as they laughed, attempting in vain to dodge each incoming missile. Don smiled to see them as he leaned on his cane, proud of his sons for no other reason than they were his. They were sharp and selfless. John had given up on his dreams of joining the army just to help provide for the family, and while he knew he must give John up to his career soon, Don was grateful the boy had stayed home. If nothing else, Don had brought his sons and daughters this far in life. That was more than many. At least, it was more than some.

“Boys!” He hollered to them as he stepped off the porch into the ragged grass beyond. “Come with me!”

John's concentration broke long enough for Ardin to get one good whack in with a stick. Don laughed as they squabbled a bit longer before joining him by the shed that had once been a stable. Don's life was largely a mystery to his boys. He felt that if he didn't begin to unravel that mystery now, it would remain one forever.

“What have I taught you boys?” He smiled, leaning against the crusty wooden planks as he took the weight off his bad leg. “The fight isn't over until it's won.”

“I don't think it's fair when your father is calling.” John shoved Ardin as they entered the shed.

Ardin recited a false quote in response. “'Distraction is the key to victory where dimwits are concerned.'”

“I want to tell you a story,” Don interrupted.

“Which one?” The boyish grin cemented itself on Ardin's face as he turned. His eyes never shone so bright as at the promise of a good story. “Tell us about the Ogres in Krakador again, father!”

“Albentine,” John corrected him with a smack. “Get your stories straight.”

“Neither.” Don reached into the woodpile next to him and grabbed one of the larger pieces. John was there in a flash to help him pull it out, and soon Don was sitting comfortably. “I want to tell you a true story, one about real armies.” He sighed. “One that involves me.”

The boys' attention suddenly concentrated. Although he had taught them everything he knew about soldiering, he had never told them stories of his time in the military. He wouldn't tell them everything; he couldn't. At least not tonight.

“What does the world demand, boys?” He asked as the two settled in on the ground before him.

“Yes.” Don nodded. “It is one of the driving forces behind all things. There are times of great imbalance, but justice is the force that rights that imbalance. We are beholden to it. We owe it our very lives, above that of any country or any single person. For that reason, it stands to condemn us in that we didn't kill them all.”

“Who, father?” Ardin's brow knit in wonder at the world that was about to unfold.

“The Magi,” John whispered in equal awe. “You fought against the Magi?”

Don nodded as he gathered the strength to continue. He didn't hear the gasps of disbelief come from his sons as he struggled to find the right words.

“In the old world, as the stories go, the Titans brought justice on themselves. Their infighting and betrayals led to their subsequent destruction, and it is why the myth holds merit today. If we do not guard ourselves against our inner demons, we too face inevitable destruction. If not by our own hands, then at the hands of the Creator.

“The Magi stand as a real example of that today. It is said they were made by the Creator in conjunction with his servant, the Greater Being, the old ghost. It is the divine right to create, and so this must be at least partially true, but they were a plague upon mankind, boys. Their grip on us was subtle, but was one we could never escape. Our peaceful existence was reduced to a masked slavery, and while we lived and grew much as we always had, their mastery of us grew in tandem.”

Don cleared his throat before he realized he was massaging his leg again. He drew his hands back and set them firmly in his lap before continuing. “It was their magic, boys. Their magic drove them mad for even greater power. In time, they ruled us, forcing even the Greater Being farther from humanity as they wedged themselves between us.”

Ardin and John both shook their heads.

“There are two of them, right?” John asked. “Two Greater Beings?”

Don simply nodded his in response. “At the same time, the Greater Being on the forbidden continent was reduced by his own madness to evil. He became known by his own people as the Greater Demon, the same name by which we know him today.”

“He invaded us,” Ardin said as if in a trance.

“Yes, son, he did. What's truly ironic about it is that if he hadn't, we would never have been free from the Magi.”

“He distracted them,” John said. He knew this much of the story, Don realized.

“More than that, he drew them off. Their departure to fight the Demon on his own shores provided the window of opportunity in which we found true freedom.

“Wiser heads among us brought the reality to bear that we were enslaved to the will of the Magi, and, more importantly, showed us how much better life would be without them. Brilliant minds among us created technology so we could attack them at the very source of their strength: their magic.”

Ardin's eyes were as wide as they could physically get without tearing at the corners. “How did you know it worked?”

“One day the man who created the technology just walked up to a Mage in the market and flipped on the switch.”

“That was stupid,” John disapproved. “He could have been killed.”

“But he wasn't.” Don punctuated his point with a raised finger. “The Mage just dropped to the ground like a pile of wet rags. The man knelt next to the Mage and slit his throat, something that no one even believed possible until that very moment. If it hadn't been for that man's bravery, we would never have been able to fight them. By the time the rest returned, we had formed an army of our own, and we were ready.”

“This is where you come in,” John said with a sense of realization. “You joined the army that stood against them.”

“Not at first, son. I was still too young. Even though we knew what we had to do, there was great resistance. Many of the City States fought the move to militarize, and even those with the deepest convictions shared fears of the might of the Magi. Not to mention their servants, the Shadow.

“But many of us knew the truth, the very truth that convinced me to pick up arms: there could be no peace without war. No justice without blood. There was a line that must be crossed, into a territory from which we could never return. I joined as the Purge began, and in the span of a few years, we perfected our methods until the fight with the Magi became a hunt.”

“And you hunted them?” Ardin asked.

“No,” Don shook his head slowly, “I trained men to do so, and created the methods by which we entrapped them.”

John grinned at that. “You were smarter than the Magi.”

“Not at first.” Don couldn't help but smile at his son's pride. “But eventually, yes. It would have been impossible without the gadgets the army gave us, but we still had to put them to good use. Eventually things escalated to a full-scale war. The Magi were hunted down, even in their homes in the mountains, and the Shadow were wiped out. Eventually we found and killed every single Mage, save one: the Witch.”

“The Witch...” Ardin stole a glance at his brother before looking back up. “Charsi.”

“I was there the day she was subdued, the cave in the mountain we caught her in littered with the bodies of men I had trained. She was,” Don paused to correct himself, “she is, a ferocious creature. We should have killed her like we had the rest. I would have done it there with my own hands, but they said there was too much to be learned from her. She was certainly the most powerful of her kind. They subjected her to every form of testing they could think of, and while they learned a great deal, she remained largely a mystery to them in the end.”

“Why did they let her live, though?” Ardin's brow converged to a crease. “Wasn't that a bad idea?”

“They said it was for the science.” Don looked off beyond his sons for a moment before shaking his head. “The truth of the matter is that they were afraid of killing her. We all were. She was too powerful, and her death would have been something too great to contain. Too magnificent and too destructive in her very nature. So we let her live; I let her live, where we should have given her the death that justice demanded. We let her live. And I believe that, boys, was our greatest mistake.”

T
HE FLAT PENINSULA
stretched out before the cavalry as they rested their horses on the cliffs. The sheer drop below Lieutenant Don Briggs threatened to send his head spinning as he stood next to his quivering mare. Her deep and rhythmic breathing slowed as she regained her composure. He ran his hand along the muscles of her neck, smoothing her mane and dampening his glove.