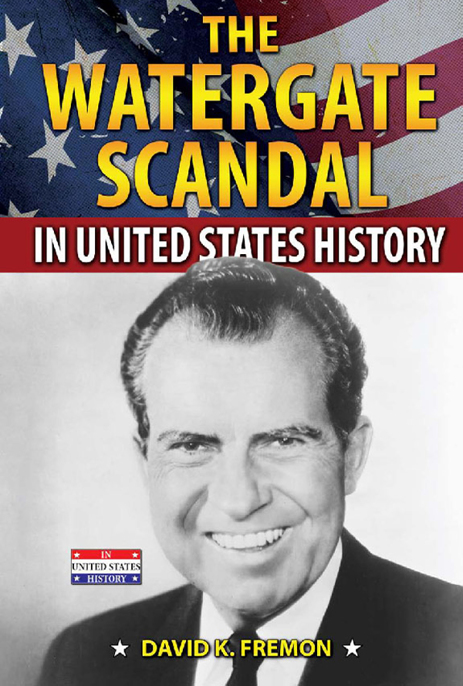 In June 1972, five men were caught breaking into the Democratic National Headquarters located in the Watergate Hotel and Office Building in Washington, D.C. As the facts of the crime came to light, it became clear that the men who broke into the Watergate were not ordinary burglars. They were working for the committee to re-elect President Richard Nixon.

In
The Watergate Scandal in United States History
, author David K. Fremon explores how a minor break-in exposed the fact that government officials were committing staggering crimes. Tracing the life and career of Richard Nixon, the central figure in the Watergate scandal, Fremon tells the story of the crimes and cover-up that destroyed Nixon's presidency and forced him to resign in disgrace.

David K. Fremon has written many magazine and newspaper articles, as well as books, on historical topics. Several of his books show past injustices and attempts to correct those injustices.

“You Won’t Have Nixon”

Chapter 4:
“A Cancer Growing on the Presidency”

Tales of the Tapes

Chapter 6:
“I Will Not Resign If Indicted!”

“Are You Running for Something?”

“My President Is a Liar!”

Note to Our Readers

Frank Wills quietly made his rounds at the Watergate hotel-office complex in Washington, D.C. So far the security guard had spotted nothing unusual. June 17, 1972, promised to be a night like any other.

Then Wills saw a piece of tape being used to hold a garage door open. Perhaps some late-night worker put it there and forgot to remove it. Wills took off the tape and continued his inspection. An hour later he returned. Someone had re-taped the door. Wills alerted a supervisor. The supervisor called the police shortly before 2
A.M
.

Six stories above Wills, other people were hard at work. Bernard Barker, a Cuban exile living in Miami, was taking photographs of documents at the Democratic National Committee headquarters. He was aided by two other exiles, Eugenio Martinez and Virgilio Gonzalez, and an American soldier of fortune named Frank Sturgis. With them was a former Central Intelligence Agency (CIA) agent named James McCord. He placed a wiretap on the telephone of the Democratic Party Chairman Lawrence O’Brien.

In a hotel room in the same building, E. Howard Hunt and G. Gordon Liddy waited. They had employed the four Miamians to help find information that could be damaging to the Democrats and help reelect President Richard M. Nixon. Three weeks earlier McCord had bungled a wiretap attempt. The men were in the hotel this night to repair damage and secure more data.

They were hardly professional burglars. McCord supplied walkie-talkies for the team. Two were discarded when the batteries did not work. Hunt and Liddy took one of the radio devices. Another went to Alfred Baldwin, a lookout posted in a hotel room across the street. Barker kept one walkie-talkie. The static from Barker’s machine irritated his fellow spies. Someone told him to turn off the walkie-talkie, so Barker did.

At the same time, a carload of plainclothes police approached the building. Since they were driving an unmarked car, Baldwin failed to notice them. The cops made their way to an eighth-floor office, in which a burglary had been reported a few days earlier.

When they turned on the lights, Baldwin responded. He called to Liddy, “Are any of your guys wearing hippie clothes?”

“Negative,” Liddy responded. “Our guys are in business suits. Why? Over.”

Liddy frantically tried to call Barker. Close the operation! Get out of there quick! Barker did not reply. He could not hear Liddy’s screams, because he had turned off his walkie-talkie.

“Sturgis quickly came in, and we saw a light go on behind him,” McCord later recalled. “He told us the obvious—someone had come in the back door, and that ‘someone’ was law enforcement personnel. We immediately heard them searching rooms at the other end of the wing, shouting ‘Come out, police’ . . . After a momentary pause, we stood up, arms in the air.”
2
Barker turned on his radio and sent a simple message: “They got us.”
3

No one at the time could imagine the consequences of this break-in. Ron Ziegler, Nixon’s press secretary, called it a “third-rate burglary attempt.”
4
Yet the arrests led to the discovery of one illegal act after another. Less than two years after winning re-election with one of the biggest landslides in history, Richard Nixon would resign in disgrace—because of the scandal known as Watergate. 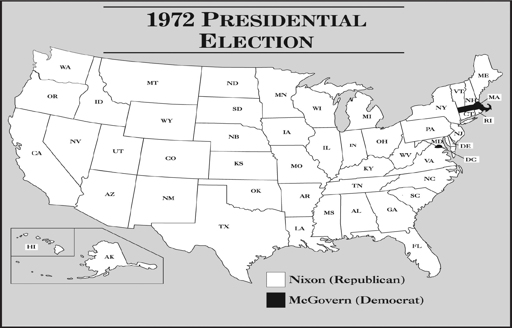 In 1972 Richard Nixon won one of the greatest election victories in American history. Democratic candidate George McGovern won a majority of votes only in Massachusetts and the District of Columbia.

Whittier was a small town outside Los Angeles when Richard Milhous Nixon was born there in 1913. His father Frank was a fruit farmer who also owned a small store. His mother Hannah raised five sons.

Other boys played; Richard Nixon worked. Most days he woke before dawn, drove crops into Los Angeles, then returned to study, work some more, and sleep. Even as a child he was serious. His mother made him wear starched shirts to school every day. She also insisted that teachers call him “Richard,” not “Dick” or “Rick.”

Young Nixon’s hard work paid off. He won a scholarship to nearby Whittier College. He gained a reputation as a master debater, good musician, and mediocre football player. Although never popular, he was elected student body president of the college. Nixon promised to persuade the school administration to allow dances on campus. He kept that promise.

Nixon went to Duke University Law School, where his serious attitude earned him the nickname “Gloomy Gus.”
1
He finished third in his class, but the standing brought little glory. Instead of getting a high-prestige job with the Federal Bureau of Investigation (FBI) or a top New York City law firm, he returned to Whittier and joined a law firm there.

Richard Nixon’s persistence even showed in his social life. Thelma “Pat” Ryan was a popular young woman. Young Richard was so impressed by her that he even drove her to her dates with other men. She finally agreed to marry him.

Nixon was exempt from military service because his Quaker religion practiced pacifism. However, he enlisted in the Navy during World War II. Nixon spent most of the war on a small Pacific island, running a supply depot. It was hardly a thrilling assignment, but it proved to be a profitable one. He learned to play poker and ended the war with thousands of dollars in winnings. That money immediately proved useful.

An unusual want ad ran in several southern California newspapers in early 1946. It sought “Any young man resident of the district, preferably a veteran, fair education” to run for Congress against Democrat Jerry Voorhis.
2
A group of Republican businessmen called the Committee of One Hundred sponsored the ad.

Whittier banker Herman Perry advised Nixon of the notice. Nixon sought the committee’s support, and the members gave it to him. Perry predicted, “If you boys ever want to sleep in the White House, get on this Nixon bandwagon.”
3
Another Republican called Nixon “the best of a bad lot.”
4
The choice of candidate seemed to make little difference, however, because Jerry Voorhis was a popular incumbent.