Read The Way of Kings Online

The Way of Kings 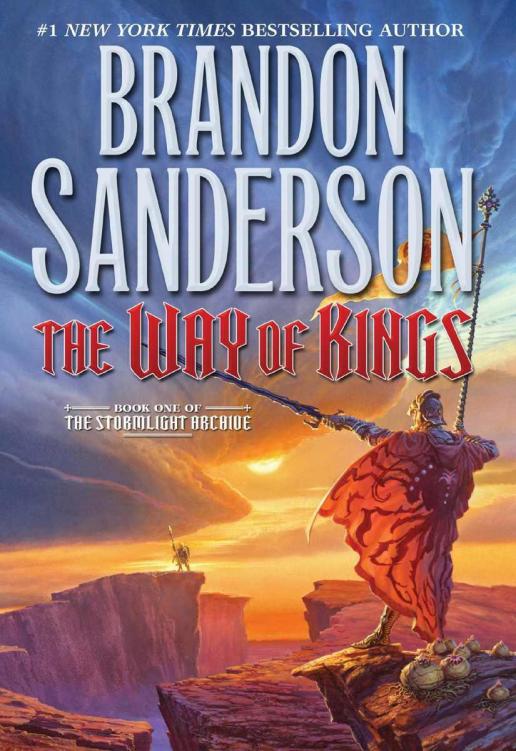 THE WAY OF KINGS

The Well of Ascension

The Hero of Ages

THE WAY OF KINGS

Book One of
THE STORMLIGHT ARCHIVE

For Emily,
Who is too patient
Too kindly
And too wonderful
For words.
But I try anyway.

I finished the first draft of
The Way of Kings
in 2003, but I started working on pieces of the book back in the late ’90s. Threads of this novel go back even further in my brain. No book of mine has spent longer simmering; I’ve spent more than a decade building this novel. And so it should be no surprise that a lot of people have helped me with it. It’s going to be impossible to mention them all; my memory simply isn’t that good. However, there are some major players that I would like to thank most deeply.

First comes my wife, Emily, to whom this book is dedicated. She gave greatly of herself to see the novel come to pass. That included not only reading and giving advice on the manuscript, but giving up her husband during long stretches of writing time. If you readers get a chance to meet her, some thanks might be in order. (She likes chocolate.)

As always, my excellent editor and agent—Moshe Feder and Joshua Bilmes—worked quite hard on this novel. Moshe, by special note, doesn’t get paid more when his authors turn in 400k-word monstrosities. But he edited the novel without a word of complaint; his help was invaluable in turning it into the novel you now hold. He also got F. Paul Wilson to check over the medical scenes, to their great benefit.

Special thanks also go to Harriet McDougal, one of the greatest editors of our time, who gave us a read and line edit on this novel out of the goodness of her heart. Wheel of Time fans will know her as the person who discovered, edited, and then married Robert Jordan. She doesn’t do much editing these days outside of the Wheel of Time, and so I feel very honored and humbled to have her input and help here. Alan Romanczuk, working with her, should also be thanked for facilitating this edit.

At Tor Books, Paul Stevens has been a huge help. He’s been our in-house liaison for my books, and he’s done an amazing job. Moshe and I are lucky to have his aid. Likewise, Irene Gallo—the art director—has been wonderfully helpful and patient in dealing with an intrusive author who wanted to do some crazy things with the artwork in his book. Many thanks to Irene, Justin Golenbock, Greg Collins, Karl Gold, Nathan Weaver, Heather Saunders, Meryl Gross, and the entire team at Tor Books. Dot Lin, who was my publicist up until this book’s release (and who is now working to put a few extra letters after her name), was a wonderful help not just in publicity, but in giving me advice and a cheering section over in New York. Thank you all.

And speaking of artwork, you may notice that the interior art for this book is far more extensive than what you normally find in an epic fantasy. This is due to the extraordinary efforts of Greg Call, Isaac Stewart, and Ben McSweeney. They worked hard, drafting artwork numerous times to get things right. Ben’s work on Shallan’s sketchbook pages is simply beautiful, a melding of my best imaginings and his artistic interpretations. Isaac, who also did the interior artwork for the Mistborn novels, went far above and beyond what should reasonably have been expected of him. Late nights and demanding deadlines were the norm for this novel. He is to be commended. (The chapter icons, maps, colored endpages, and Navani notebook pages came from him, if you are wondering.)

As always, my writing group has been an amazing help. The members of it are joined by a few alpha and beta readers. In no particular order, these are: Karen Ahlstrom, Geoff and Rachel Biesinger, Ethan Skarstedt, Nathan Hatfield, Dan Wells, Kaylynn ZoBell, Alan and Jeanette Layton, Janci Olds, Kristina Kugler, Steve Diamond, Brian Delambre, Jason Denzel, Mi’chelle Trammel, Josh Walker, Chris King, Austin and Adam Hussey, Brian T. Hill, and that Ben guy whose name I can’t spell right. I’m sure I’m forgetting some of you. You are all wonderful people, and I’d give you Shardblades if I could.

Whew. This is turning into an epic acknowledgments. But there are still a few more people that need notice. The writing of these words is happening right around the one year anniversary of me hiring the Inevitable Peter Ahlstrom as my personal assistant, editorial aid, and extra brain. If you go through previous acknowledgments pages, you’ll always find him there. He’s been a dear friend of mine, and an advocate of my work, for years. I’m lucky to now have him working for me full time. He got up at three a.m. today to get the last proofread of the book done. When you next see him at a convention, buy him a block of cheese.

I would also be remiss if I didn’t thank Tom Doherty for letting me get away with writing this book. It’s because of Tom’s belief in this project that we were able to get away with the novel being so long, and a personal call from Tom was what managed to get Michael Whelan to do the cover. Tom has given me more here than I probably deserve; this novel (at the length it boasts, with the number of illustrations and artwork it contains) is the type that would make many publishers run away at full speed. This man is the reason Tor consistently releases such awesome books.

Finally, a moment on Michael Whelan’s wonderful cover. For those who haven’t heard the story, I started reading fantasy novels (indeed, I became a reader in the first place) back as a teenager because of a beautiful Michael Whelan cover painting. He has a unique ability to capture the true soul of a book in a painting—I always knew I could trust a novel with one of his covers. I’ve dreamed of someday having a painting of his on one of my books. It seemed something I was unlikely ever to receive.

To finally have it happen—and on the novel of my heart that I’ve been working on for so long—is an amazing honor.

Prelude to the Stormlight Archive

Book One: The Way of Kings

Part One: Above Silence

1-3: THE GLORY OF IGNORANCE