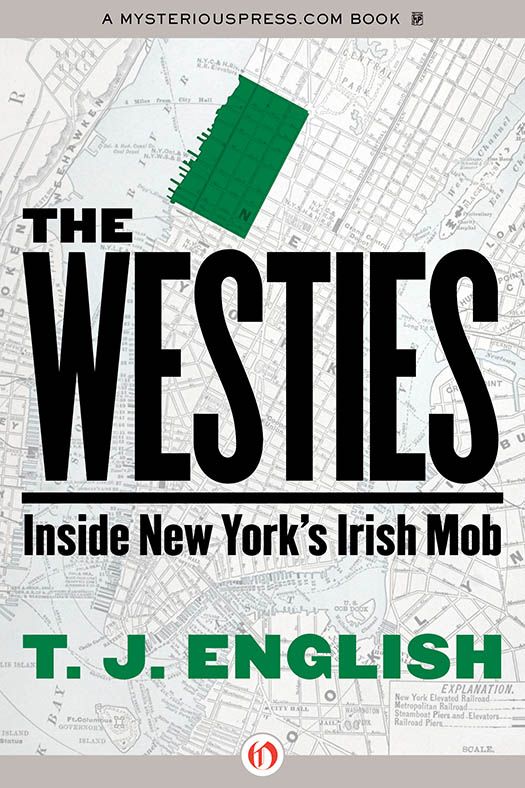 Contrary to popular opinion, no book—especially a first book by a novice author—is compiled in isolation. For their assistance I would like to thank my friend and colleague Bob Callahan, who got the project rolling in the first place, and my agent, Barbara Lowenstein. Gale Dick provided invaluable help with the historical research, and my brother, Terry English, formerly a Green Beret captain in Vietnam, showed me how to read often cryptic military records. I’d also like to thank my longtime friend and fellow journalist Frank “the Crusher” Kuznik, who provided the encouragement and criticism any writer needs to slog his or her way through the muck; and Lisa Wager, my editor, who wasn’t afraid to take the manuscript into a back room and slap it around a bit. I’m also indebted to William Urshal, Tom Dunne, and Michael Daly for their contributions.

There are hundreds of lawyers, cops, gangsters, and neighborhood people from the West Side of Manhattan whom I could thank. At the risk of leaving someone out (or, given the subject matter of the book, naming someone who would rather remain anonymous), I’ll offer a blanket “thank you” to all—you know who you are. I would be remiss, however, if I didn’t offer special thanks to Lawrence Schoenbach, Esq., Richie Egan, and everyone at the law firm of Hochheiser and Aronson.

Finally, I’d like to thank Francis and Marcelle Featherstone for staying in touch as long as they could.

6.–Sonny’s Cafe, 678 9th Avenue (between 46th and 47th Street), extinct, now the site of Midtown Bicycles: Mickey Featherstone gets a handgun from Jimmy Coonan to use at the Leprechaun Bar, September 30,1970.

10.–452 West 50th Street (between 9th and 10th Avenue): Flophouse apartment shared by Billy Beattie and Paddy Dugan, among others.

1: The Ghosts of Hell’s Kitchen

2: Last of a Dying Breed

6: No Corpus Delicti, No Investigation

10: Having a Drink on Whitey

11: The Feds and Little Al Capone

15: In the Interest of Justice

17: What Goes Around, Comes Around

What follows is a work of nonfiction. The events described are true and the characters are real.

While much of the dialogue in the book is taken directly from court transcripts, legal wiretaps, and electronic eavesdropping devices, in many cases it was based on interviews with the actual participants. It should be recognized that trial testimony and interviews sometimes produce conflicting versions of events. Where such conflict exists in testimony or recollection, the author has sought to provide a version of the facts which is in his opinion the most plausible. In addition, certain scenes have been dramatically re-created and in some cases a series of meetings or events condensed to provide narrative clarity.

—Jimmy Cagney as Rocky Sullivan
in
Angels with Dirty Faces

A
t approximately 6:30
A.M.
on the morning of November 4, 1987, Francis Thomas “Mickey” Featherstone awoke in a cold sweat. He tossed and turned in his bed, then sat upright. For a moment, he didn’t know where he was. His heart was pounding and his eyes stinging as he peered into the surrounding darkness. Slowly, he was able to make out the familiar stone walls, the grungy toilet, the overhead bunkbed, and the forbidding metal door of his cell. Featherstone let out a sigh of relief and wiped the sweat from his brow with an already soaked bedsheet. Thank God, he said to himself, it’s only prison.

Featherstone’s night had been filled with bad dreams. He remembered seeing hundreds of human hands, pale and disembodied, reaching through the bars of a dingy prison cell. Then he saw himself on the floor of what looked like a hotel room, his wrists and ankles bound together with wire. He was surrounded by four or five conservatively dressed people—professional people. One of them, a man, put a gun to Featherstone’s head and pulled the trigger. He felt the pain, saw the blood spurt past his eyes. Then he woke up.

Over the course of his often troubled thirty-nine years, Featherstone had grown accustomed to nightmares like this. But it had been a while since he’d seen the images so clearly. Not since the early 1970s anyway, when, after returning from a stint in Vietnam, his near sleepless nights were frequently filled with severed body parts, glistening blood, and the sounds of incoming fire. Over the years he’d talked to many psychiatrists about these dreams and they all told him the same thing. “Post-traumatic stress syndrome,” they called it, using the popular post-Vietnam euphemism for battle fatigue.

As the years wore on and Featherstone gained distance from his war memories, the bad dreams subsided. More recent psychiatric evaluations gave him a clean bill of health. The nightmares would recur only if he were to engage in an “anxiety-inducing undertaking,” according to a psychiatrist he’d seen just weeks earlier.

An anxiety-inducing undertaking
. Featherstone had to laugh when he heard it put that way. With his eleventhgrade education, it was a phrase he’d never have used himself, though he had to admit in its own cold and clinical way it was a perfect description of what he was about to embark on.

Featherstone got up from his mattress and made his way to a porcelain sink near the toilet. He let the water run until it was good and cold, then cupped his hands under the faucet and splashed his face. He looked at his reflection in the mirror and saw the familiar crescent scar on his neck, the disheveled sandy-blond hair, the droopy mustache and hazel, forlorn eyes of a hardened convict.

The cool water ran down his chest and back, sending a ripple of pleasure through his taut five-foot-nine-inch frame. The images of violence and terror from his dreams had already begun to recede.

Mickey Featherstone was ready to face the day.

Hours later, two United States marshals met Featherstone at his cell. Now dressed in a conservative light-brown suit, his hair newly trimmed and groomed, he submitted to a brief security check. Then the marshals led him down a long corridor which served as a passageway from New York City’s Metropolitan Correctional Center (MCC), where he was incarcerated, to an adjacent building—the federal courthouse at Foley Square in lower Manhattan. Inside the courthouse, they took him to a sparsely furnished room with a large mahogany conference table, where he sat quietly until a breakfast of eggs, toast and coffee arrived. Featherstone tried to eat, but even this bland combination of tastes was too unsettling to his stomach. He pushed the food aside.

As a soldier stationed along the Mekong Delta during the war, then as a gangster and convicted killer back home in New York City, and finally as an inmate at Attica State Prison, Sing Sing, Rikers Island, and a half-dozen other federal and state penitentiaries, Featherstone had tried to eliminate fear from his emotional makeup. Too many times in his life he’d seen otherwise competent people paralyzed by fear at the moment of decision, usually resulting in the person’s getting beaten, busted or something much worse. He’d learned over the years to submerge his own fears. The only place they had free rein was in his dreams.

But now, in this room on this morning in November of 1987, Featherstone’s hand shook as he tried to drink his coffee. He was scared, no doubt about it. For in just a few short minutes he would be taken to Room 506 of U.S. District Court. There he would do something he’d always promised himself would never happen—he’d willingly take the stand to testify against his own people. To the court, the press, and the city-at-large, these people were known as the Westies, a gang of racketeers who had risen from the streets of Manhattan to the highest levels of organized crime. To Featherstone, they were the people he knew best, many of them close friends since childhood.

Mary Lee Warren, an assistant U.S. attorney for the Southern District of New York, entered the room to begin preparing Featherstone for the day’s testimony. He heard her voice and the familiar litany of crimes they’d be covering, but the words had no impact. So many hours, days and months had been spent relating the details of his past to cops, lawyers and representatives of the federal government that they no longer felt like his memories. At times, it seemed to Featherstone like his entire past was now the property of the U.S. Attorney’s office.

A Cowboy's Home by RJ Scott
HARD KNOX by Jaxson Kidman
Fouling Out by Gregory Walters
American Sniper: The Autobiography of the Most Lethal Sniper in U.S. Military History by Chris Kyle
Peril by Ponytail (A Bad Hair Day Mystery) by Nancy J. Cohen
Honor Thy Father by Talese, Gay
Heart Block by Melissa Brayden
The Bare Necessities (Non-Profane Edition) by John Harding
Positively Mine by Christine Duval
Rusted Veins: A Sabina Kane Novella by Wells, Jaye
Our partner