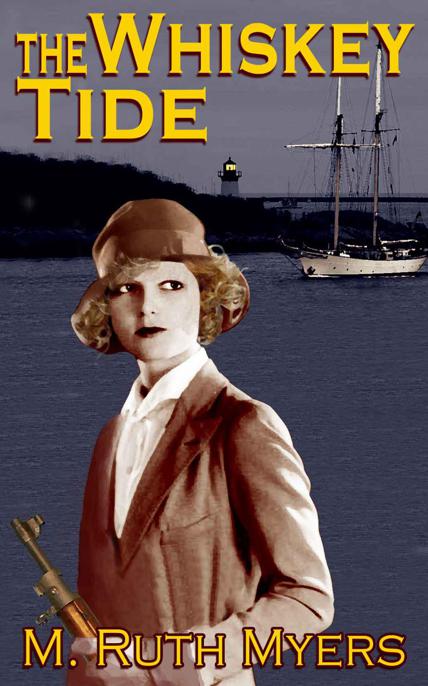 All rights reserved. No part of this book may be used or reproduced in any manner whatsoever without written permission from the author, except in the case of brief quotations embodied in critical articles and reviews. Contact
www.mruthmyers.com.

This book is a work of fiction. Names, characters and incidents are products of the author’s imagination or are used fictitiously. Any resemblance to actual events or persons, living or dead, is entirely coincidental.

in hopes he will one day

On the night she stood up to the man who broke bones for a living, Kate Hinshaw was hiding. Noiseless as fog, she glided through back rooms of the large white house on Salem’s Neck, escaping the social chit-chat of her sister’s engagement party and berating herself for not speaking more forcefully when the pompous wife of an equally pompous judge labeled all female college teachers ‘daughters of Lesbos’. The memory fueled Kate’s anger as her hip nudged the swinging door into the kitchen. Slipping through, she felt the room’s humidity mingle with the hot August night to melt her voile dress onto her body.

Peg looked up, knobby elbows dancing above a silver platter she was refilling with lobster puffs and tiny tea sandwiches.

"Here, now. You get back in and be sociable!"

"I have been the very soul of sociability, Peg."

Kate pushed back golden hair that was fashionably frizzled. The cook scowled.

"Let you out on your own for a few years and you think you know everything. If you ask me, your pa's—"

"—wasting good money sending me to that college when it hasn't improved my manners a bit," Kate finished. "I could be like Aggie and her friends," she suggested evilly.

A click of the tongue conveyed Peg's disapproval of Kate's younger sister. Kate laughed and gave her a quick hug, then began to dab pimento cheese onto circles of toast. Peg, for all her grumbling, would be glad of help. The wiry Irishwoman had ruled the kitchen of the rambling old house since before Kate's older sister was born. Tonight's festivities were burying her in quickly depleted trays and mountains of empty champagne bottles.

No matter that the Volstead Act had been in force two years, or that Rosalie's fiancé was in his final year at Harvard Divinity. You had to celebrate an engagement in style, Pa said.

Ethel, the day girl, was supposed to be helping this evening. As Kate opened her mouth to ask her whereabouts, the girl scurried in with frightened eyes.

"There's a man at the door," she told Peg breathlessly. "Right unpleasant. Says he wants a word with Mr. Hinshaw. When I told him Mr. Hinshaw was entertaining and he should see him downtown tomorrow, he tried to stick his foot in the door — but I slammed it. Now he's out there pounding!"

Kate felt Peg slide her a glance and was startled to realize the cook was waiting for her to take the lead. Apparently living away from home for most of the year gave her some new status in spite of Peg's lectures.

"I'll see what he wants." Kate stuck the spoon into the bowl of cheese with more confidence than she felt.

It was probably one of Pa's charity cases, some working-class man who couldn't afford a lawyer but whose plight appealed to Pa's sense of justice. They showed up afterwards sometimes with gifts, or even a small payment. Ethel scurried out, relieved to return to gathering dishes.

"He makes enemies, your pa does," Peg cautioned. "Maybe we should call the coppers."

Kate hesitated. The last thing she wanted was for anything to spoil this evening for Rosalie. Her older sister was as proper as she was sweet-natured and pretty, and her fiancé's family was positively stuffy. As Kate debated, the screen door into the kitchen crashed. She whirled to see a thick-shouldered man standing not three steps away. He wasn't roughly dressed as she had expected, but there was menace in the sharp lines of his face.

"Tell Hinshaw I've got a message for him," he demanded.

Kate's throat felt too tight for speech. "You'll have to see him tomorrow."

"You'd be the middle daughter, wouldn't you?"

The stranger's knowledge chilled her. At the edge of her vision she saw Peg eying a distant drawer where butcher knives were kept. Without warning the stranger sprang, catching Kate's wrist and jerking her almost off her feet.

"Why don't we just find him together?"

His smile was the insolent smile of a bully who liked to intimidate. And tucked in his belt was a small black leather sap. Her father had pointed one out once; whispered to her they were used for breaking bones.

Her free hand flew behind her seeking anchorage. It found only empty champagne bottles piled on a work table. As the bottles crashed to the floor, she fumbled for the neck of one, and with a breath of hesitation brought it around to crack hard against the wall by the stranger's head.

He jerked back at the shower of glass, but didn't release her. Kate thrust the jagged edge of the bottle toward him with slashing motions. Swearing nastily he retreated, and she found herself free.

"There are... I don't know how many judges and a police commissioner in the other room." Her words were harsh with fear. She wondered when her knees would collapse.

The intruder's eyes had narrowed in his pockmarked face.

"Tell your old man it ain't healthy defending union troublemakers." The screen door banged again and he was gone.

Then Peg was beside her prying the bottle from her nerveless fingers. Kate looked at the broken glass that seemed to be everywhere. Legs unconnected to her carried her to the kitchen counter. She hoisted herself to the spot where she'd sat when she was in pigtails and drew her hair back with a trembling hand as she struggled for breath.

"We both deserve a drink," she said in the silence swallowing them. "Gin and tonic for me." She laughed weakly at Peg's startled look.

Peg returned from the serving pantry bearing a glass filled with clear liquid and another with brown. Kate took a large swallow, then raised her glass. "Class of '23, Peg. That's what we say at school when we have a drink. Can you believe by this time next year I'll be graduated?" She knew she was chattering. If she didn't, she would start to shake.

Tension seeped from Peg's face as she sipped whiskey.

"And where in the name of St. Pete did you learn a trick like that?"

"Oh...." Kate was embarrassed to confess her folly just when Peg was regarding her as an adult. She laughed unsteadily and gulped a little more gin. "A school chum and I went to a socialist meeting — just to see for ourselves what they were about. When it was letting out, some men ran out of an alley and started a fight with the speakers. One was taking a terrible beating when he picked up a bottle and broke it like that. The bullies backed off."

Peg unhooked an upper lip like a snapping turtle's.

"Like father like daughter. And just see what thanks it gets when your pa puts himself out for riffraff instead of tending to gents of his own class!"

"Justice shouldn't depend on your pocketbook," Kate said lightly. Words she'd grown up with. Sliding from the counter she gave Peg a quick hug, unsure which one of them she was reassuring, then headed for the dining room as if to be sociable.

From the dining room door she could see Rosalie's party was going perfectly well without her. Her sister's face was flushed with happiness as she stood beside her fiancé, who in another year would be the Rev. Dr. Arthur Kent. Rosalie looked dainty as fine lace as they talked with well-wishers. Mama and Pa were surrounded by their friends as well. Even her nine-year-old brother Woodrow was being well entertained, what with Nathan Welles squatting beside his wheelchair and drawing cartoons.

Only her step-cousin Theodore seemed to stand on the edge of things, scarcely hearing when anyone talked to him, scarcely speaking. His golden head seemed perpetually bowed. His tall and once-graceful figure leaned, void of spirit, on the cane which had supported him since the War To End Wars. Grief ate at Kate seeing him so changed and so wasted. Yet whenever his eyes sought her out and the haunted look in them gave way to brightness, panic filled her. They were the eyes of a drowning man reaching desperately for a life preserver.

She felt guilty turning away from this gentle companion of her childhood. She loved Theo, but not in the way he wanted. It was torture to see him drifting, taking interest in almost nothing. It was equal torture to become the focus of that interest.

His pale head raised and Kate dodged back. She slipped up the back stairs to her room. On her dresser lay the letter from Scotland that had arrived that afternoon. The letter that could carry her into company as rare and wonderful as that of the Round Table. Filled with the thought of it, she went to the open window. Night breezes wrapped their arms around her, bearing the scent of adventure from Salem Harbor, connecting her with all who had breathed it before her: captains on the vanished ships of the China Trade, runaway cabin boys, pirates, even the small boats rumored to bobble in almost nightly now with bootleg hooch.

The episode in the kitchen had shaken her more than she'd let on. Cheek pillowed on her arms, she looked into darkness toward Hospital Point and the waves she had loved since earliest memory. She thought about days when she and her sisters and cousins were a single tangle of children running barefoot through the sand without distinguishing boys from girls, dreaming, arguing, measuring the world by how far they could roam in a day.

"It's a hell of a pressure to put on a relative, Oliver!"