The White Mountains (The Tripods) 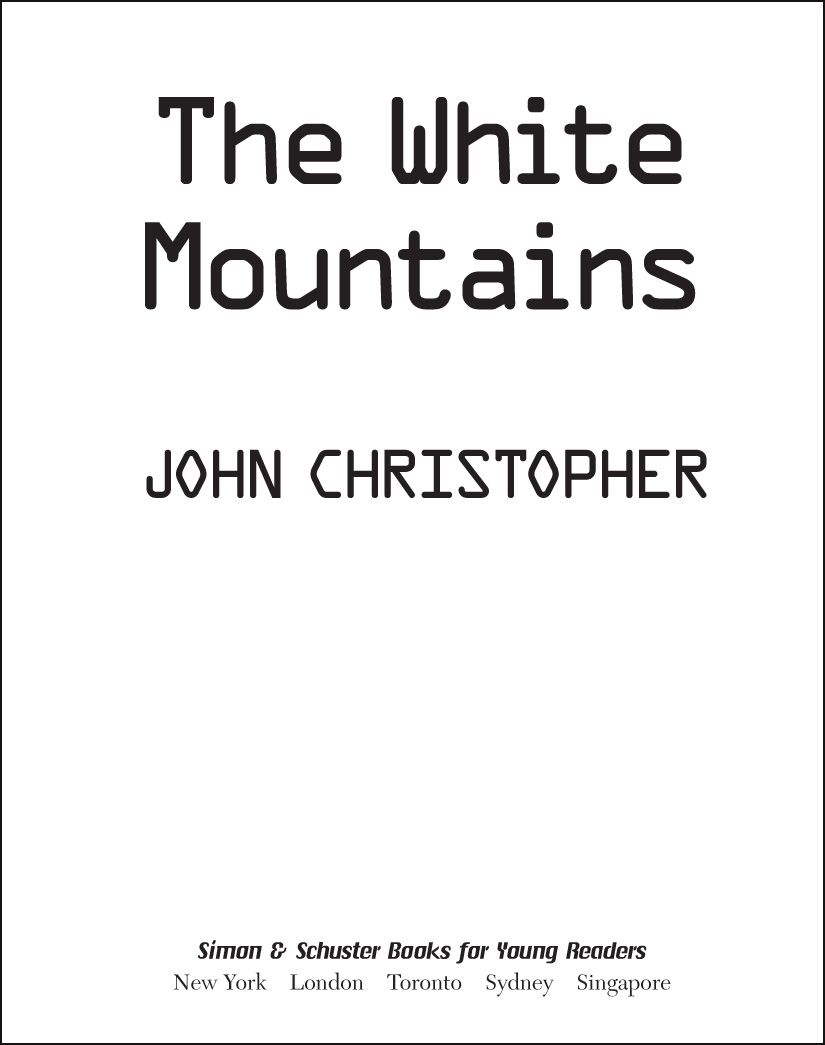 To Jessica:
this, and the rest, with love

S
IMON
& S
CHUSTER
B
OOKS FOR
Y
OUNG
R
EADERS
is a trademark of Simon & Schuster.
Book design by Ann Sullivan
The text for this book is set in New Caledonia.

Preface to the Anniversary Edition
What Is a Tripod?

Well, there’s a brief description in the first chapter of
The White Mountains:
“… we could see it over the roofs of the houses to the south: the great hemisphere of gleaming metal rocking through the air above the three articulated legs, several times as high as the church. Its shadow came before it, and fell on us when it halted, two of its legs astride the river and the mill.… one of the enormous burnished tentacles came down, gently and precisely, and its tip curled about Jack’s waist, and it lifted him up, up, to where a hole opened like a mouth in the hemisphere, and swallowed him.”

So a Tripod is a monstrous machine, some sixty feet high. It travels on three metal legs and has tentacles (three, we discover later) which can reach down and sweep a boy up into an opening in the metal pod which seems to represent its head. But is a Tripod an intelligent machine? Or some extraordinary form of transportation? And if the latter, are there creatures inside the pod, driving this weird sort of tank on stilts the way we might drive a car?

At the end of
The White Mountains,
the reader may have his or her own guess about exactly what kind of thing a Tripod is, but he or she doesn’t really know. I’ll let you into a secret: at that point the writer didn’t know, either.

Thirty-five years ago I received a letter which was to prove much more important than it seemed at the time. By then I had been a professional writer for over ten years, writing different kinds of fiction but principally what was commonly known as science fiction.

The letter was from my London agent. A publisher who had read my adult novels was wondering if I would write something for a younger audience. This would be a new departure for me, and I wasn’t sure I wanted to get involved. But it was encouraging that someone was actually asking me to write something, instead of just waiting till I sent a manuscript in. I also reckoned that, children’s novels being normally much shorter, I wouldn’t be squandering more than a month of precious writing time.

But what sort of a book was it going to be? The publisher obviously wanted science fiction, but I was getting tired of destroying the world—by famine or freezing or earthquakes—and I was no longer interested in exploring the universe outside our planet. There was a reason for that.

When I was the age of the boys and girls for whom it was now proposed I write, I’d been very excited about the possibilities of space travel, but those had been different days. In the early thirties we knew just enough about the solar system for its possibilities to be a magnet to the imagination. The Moon might be cold and dead, but the planets offered scope for dreaming. Mars, for instance, was colder than our earth and had a thinner atmosphere, but possibly not too cold or airless to support life.

And Mars had those canals. An Italian astronomer called Schiaparelli, looking through his telescope in the nineteenth century, said he had seen
canali
on Mars’s rust-red surface. In Italian that just meant “channels,” but it got translated as “canals,” which was much more intriguing. Maybe in that thin but breathable atmosphere there were long waterways, built by an ancient race of Martians, dotted with Martian cities that were lit by day by a smaller sun and at night by the magic gleam of two
low-lying moons. An ancient race, because one might suppose that on that chillier planet the process of life’s evolution had been in advance of ours. Apart from being older, the Martians might well be wiser and able to pass on to us the fruits of their knowledge. Or, if they were so ancient as to have become extinct, the ruins of their cities might still be there to be explored.

Then there was Venus—closer to the sun and much hotter than the earth—with its perpetual blanket of clouds. What might lie beneath the clouds? Perhaps a planet in an earlier period of evolution, as Mars was in a later one. Something like our own Carboniferous era, perhaps. Did tropical swamps teeming with dinosaurs and hovering pterodactyls await the arrival of our first spaceship?

Because that was something else we felt confident about: early experiments with rockets had already made the eventual conquest of space more than plausible. It could happen in our lifetime, and with it bring unthinkable wonders. It was a bit like being in Elizabethan England, reading stories about what might be found in the new world which was opening up on the far side of the barely explored western ocean.

But in three short decades everything changed. By the 1960s we knew more about the universe and the solar system—but what we’d learned was much less interesting than what we’d imagined. We knew that Mars was not just cold but an altogether hostile environment, Venus a choking oven of poisonous gases. The chance of any kind of life existing on either planet—or anywhere within reach of our probing rockets—was incredibly remote. That brave new world on the other side of the ocean of space had turned into a lifeless desert.

A couple of years after I wrote
The White Mountains,
space itself was finally conquered. The landing on the Moon was televised around the world, timed to coincide with prime-time U.S. television viewing. That meant the early hours of the morning in the Channel Islands, where I then lived. The boy I had been at fourteen would never have believed that I couldn’t be bothered to stay up to watch it.

Black Water: A Jane Yellowrock Collection by Faith Hunter
SEAMONSTER: An Aquarathi Novella (The Aquarathi) by Amalie Howard
The Sweet Spot by Laura Drake
One Realm Beyond by Donita K. Paul
Witness Pursuit by Hope White
My Brother’s Keeper by Malane, Donna
Moon Princess by Barbara Laban
The Pogrom of Mages: The Healers of Glastamear: Volume One by Charles Williamson
The Black King (Book 7) by Kristine Kathryn Rusch
Vagabonds of Gor by John Norman
Our partner