Read The Will Of The People (Conspiracy Trilogy Book 1) Online

The Will Of The People (Conspiracy Trilogy Book 1) 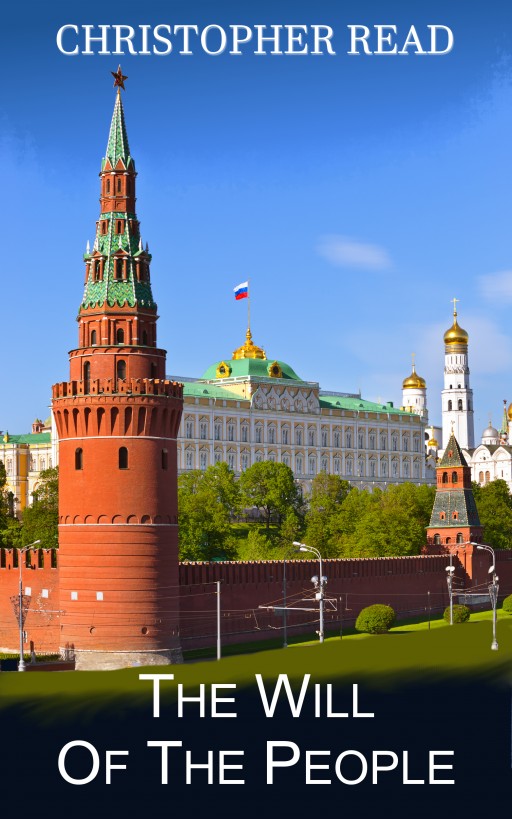 THE WILL OF
THE PEOPLE

BOOK ONE OF THE CONSPIRACY TRILOGY

THE WILL OF THE
PEOPLE

All rights
reserved. No part of this book may be reproduced in any form or by
any electronic or mechanical means, including information storage
and retrieval systems, without permission in writing from the
author. The only exception is by a reviewer, who may quote short
excerpts in a review.

This book is a
work of fiction. All the names, characters, other entities, places
and incidents portrayed in this novel are either products of the
author’s imagination or are used fictitiously. Any resemblance to
real persons, living or dead, real-life entities, past or present,
or actual incidents, is entirely coincidental.

P
rologue – February to May

Prologue – February to
May
Moscow

With its
vaulted ceilings and stained glass, countless mosaics, and bronze
statues seemingly at every turn, the underground palace that is the
Moscow Metro sucks in almost ten million passengers every day,
newcomers invariably marvelling at such extravagance, wide eyes
drawn upwards by majestic chandeliers and tall marble pillars.
Started in 1931, Stalin had ensured the metro had enjoyed the
services of the Soviet Union’s very best architects, and no expense
had been spared to create a grandiose and enduring symbol of Soviet
supremacy.

Just a short
distance from the 25-storey Holiday Inn, even the ticket hall of
the Sokolniki station impressed with its arched roof and white
marble, while the twin platform proffered a double rank of
blue-grey marble pillars, resting on a chequered black and grey
granite floor. Yet, as if to counter its outward glory, the Moscow
Metro had also become a favoured target for terrorists, the
Sokolniki line’s Lubyanka and Park Kultury stations attacked in
2010; a total of forty dead, scores badly injured.

In the decade
and more since that devastating attack, the continuing threat from
suicide bombings had done little to counter complacency, Moscow’s
commuters adopting a pragmatic approach to the obvious dangers,
concerned but certainly not cowed. The authorities had embraced a
similar philosophy, the Metro gradually returning to a more relaxed
regime, with CCTV regularly providing a lone and somewhat dubious
form of protection.

The morning
rush hour was at its height, the warmth of the station’s interior a
welcome deliverance from the bitter cold of a late-February
morning. Aldis Eglitis stood stiff-backed on the crowded platform,
eyes half-closed, trying to push all negative thoughts from his
mind. Every day for over a week now, he had braced himself against
the rush-hour crowds, riding the commuter train as it headed
south-west towards the city centre. To his fellow passengers,
Eglitis was just another anonymous face, the smart suit and silk
tie those of an elderly businessman, or perhaps a lawyer, the
exclusive gold watch and expensive briefcase indicating – whatever
his chosen profession – an envious degree of success.

While some
might have attributed Eglitis’ presumed wealth to the advantages
offered by a more liberal Russia, he personally had only contempt
for everything Russian, and he could never forgive the betrayal of
his youth. Communist, Conservative or Democrat – the politicians
had merely changed their allegiance, not their souls. The
post-Putin Government had promised a better, freer Russia, and a
clean break from his dictatorial regime; but the new man in the
Kremlin still bullied and blackmailed, Russia’s neighbours always
conscious of the hungry bear peering over the fence, worrying as to
how best to keep it fed. Some might assume that the crumbs of
Crimea and Transnistria had long-since assuaged Russia’s greed, but
Eglitis knew it was but a temporary respite, history proving that
Poland and the Baltics had every right to be fearful of an
expansionist Russia.

Latvian by
birth, Eglitis’ early years had been spent at a school especially
reserved for children of the communist elite, his father taking
full advantage of the benefits bestowed upon a respected Party
member. A large home south of Riga, a foreign car, easy access to
the gourmet food shops – the family had lived a life of relative
luxury, content to sit back and watch as Latvia’s distinctive
identity, and even its language, was swamped by an influx of
Russian immigrants. They had even managed to emerge untouched from
the Khrushchev purge of ‘59 which saw many of Latvia’s communists
stripped of their posts, their leader deported to Russia.

At sixteen, a
self-righteous Aldis had his sights set on a career in medicine,
his fluency in Russian guaranteeing an open route through higher
education and beyond; life was easy and predictable, with weekends
spent by the beach or canoeing along one of Latvia’s many rivers.
Then, in an unguarded moment of stupidity, his father forgot the
lessons of the past, using a private meeting with a so-called
friend to voice his frustration over the Russification of Latvia.
In less than a week Aldis’ life of privilege and opportunity was no
more, his father unemployable, the family turned out of their home
and into a squalid two-room apartment. Aldis’ education came to an
abrupt end and for the first time in his young life he came to know
the true meaning of poverty. His father’s mood varied daily from
angry to morose, alcohol destroying what little was left of his
self-esteem – and his common sense. He began to attend nationalist
gatherings, openly speaking out at one meeting to urge civil
disobedience. Past influence had long since counted for nothing and
the next morning the KGB battered down the apartment door.

Eglitis never
saw his father again. Guilt by association – or perhaps birth – was
automatically assumed, and at the age of nineteen an innocent Aldis
was sentenced to two years in a labour camp.

Even after his
release he remained a partial outcast, working from one temporary
job to another. The labour shortage of the early ‘80s found him
newly-married and working at Riga’s State Electrotechnical Factory
making telecommunications equipment for the Soviet military.

Then, just
when it seemed his life had finally reached a happier and more
stable phase, Eglitis’ young wife was killed in a traffic accident,
protecting their baby daughter with her body as a drunk Russian
immigrant lost control of his car. It was another year before
Eglitis finally accepted his true fate, his self-confidence growing
as he split his time between looking after his daughter and helping
run guns and explosives to various anti-Soviet groups based in the
Baltics and Ukraine.

The adrenalin
rush soon became addictive, and with the collapse of the Soviet
Union, Eglitis merely transferred his expertise to the nationalist
factions in Dagestan and Chechnya, his role slowly changing first
to bomb-maker, then field sub-commander. That all ended in 2009,
when Russian Special Forces generously left Eglitis with a
bullet-sized memento buried deep in his belly. It took three
operations and almost eighteen months for the wound to recover
fully, and by then Eglitis had settled into the less-stressful role
of doting grandfather.

Yet, despite
everything, Eglitis couldn’t forget – or ignore – his need for
vengeance, both for his parents and himself. When a Ukrainian
contact had offered Eglitis the chance to return to his earlier
bomb-making ways, Eglitis had at first been dismissive – that was
until the sudden crushing pain in his chest. Even as the heart
consultant mechanically worked through Eglitis’ options and
potential survival rates, the latter had been focusing on something
even more personal, but equally deadly.

Away to
Eglitis’ right the constant low rumble from the tunnel suddenly
increased in intensity, and in a blaze of light a train swept out
towards him. Eglitis pressed forward, right hand clamped around his
briefcase, following the throng of commuters as they surged towards
the opening doors. His chosen carriage was already crowded and
Eglitis squeezed his way to stand in the aisle, his back resting
against a metal partition.

Within seconds
the doors hissed shut and the train accelerated away, the rush-hour
crush pressing in on Eglitis. He let his gaze wander, settling for
a brief moment on two young men away to his left. Outwardly, both
of his associates looked calm enough, and if anyone could be said
to be the weak link then it was undoubtedly Eglitis himself, the
nitro-glycerine spray in his pocket perhaps the only thing between
him and disaster.

Was it
foolishness or pride that had made him choose to be part of this
initial attack? Eglitis’ future role was a key one and he had been
forced to overrule the many objections as to his decision, wanting
to show – perhaps even to himself – the depth of his commitment to
the struggle ahead.

Eglitis’ gaze
resumed its random traverse, stopping suddenly as his eyes met
those of a young woman standing opposite. Eglitis smiled in
response, unsure as to what had attracted her attention, and also
annoyed he now had a permanent reminder of the personal loss he was
about to inflict. The girl gave a brief smile, then looked away,
seemingly unconcerned.

It was just
ten minutes to their destination. Others had argued it was too
dangerous to target not just the same line, but the same station as
in the 2010 attack, but for Eglitis there was more than one message
to be sent. Lubyanka was the station opposite to the Lubyanka
Building, former home of the KGB and site of the infamous prison.
In practice, the Lubyanka name actually encompassed several
buildings, the grey façade to the north-east fronting the
headquarters of the Federal Security Service (FSB), Russia’s main
counter-terrorist agency. The KGB’s successor had shown itself to
be different only in name, with the FSB equally determined to
stifle dissent and so protect the ruling clique. The Lubyanka was
thus the heart of Soviet, now Russian repression, and to many a
hated symbol of Moscow’s out-dated dominance.

The excitement
of old was making a welcome return, and Eglitis kept his breathing
slow and deep, forcing his body to relax as he tried counting down
the seconds, while keeping his gaze away from the young woman –
instinct told him there was no danger here. His trip to Moscow from
London last November had been Eglitis’ first visit to the city in
almost a quarter of a century, but to him the people were still the
same: sullen, untrustworthy and arrogant, invariably remembering
with false pride the brutal regimes of Stalin and Brezhnev.

As the train
raced into the glare of Lubyanka station, Eglitis glanced again at
his two colleagues: it would be at least another four minutes
before the train carrying the fourth bomber arrived at Lubyanka,
giving the other three more than enough time to reach their
respective exits; their own bombs could then be timed so as to
intensify the carnage. Unlike previous stops the carriage disgorged
a good third of its passengers, with relatively few waiting to
board. Eglitis forced his way through the slower commuters,
pressing quickly on towards the Lubyanka Square exit, uncaring as
to whether the security cameras picked him out or not.

The crowd
thinned once he reached the western vestibule and Eglitis slowed.
Phone in hand, he moved to stand beside the north wall, studying
the phone display as though reading a text. The train bomber would
have the briefest time to escape or seek protection but Eglitis had
little doubt she would fulfil her role, patriotic fervour leaving
no room for second thoughts.