Authors: the Wisdom of

The Wisdom of Oscar Wilde 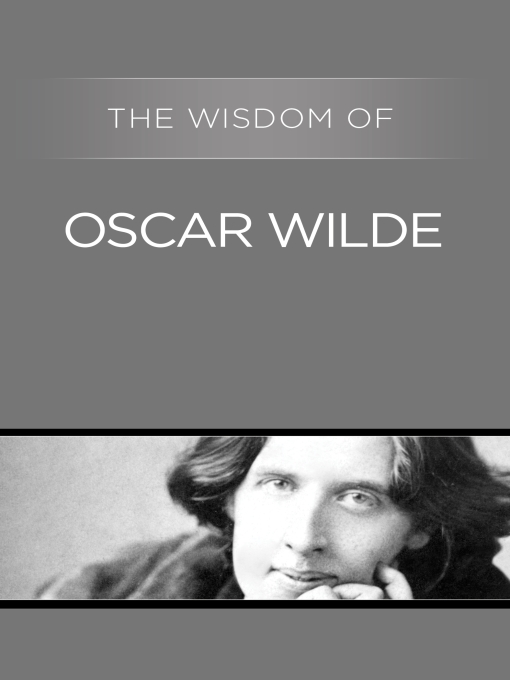 The Wisdom of
OSCAR WILDE

The Wisdom of
OSCAR WILDE

Part I of this volume comprises epigrammatic quotations taken primarily from Oscar Wilde’s major works,
The Picture of Dorian Gray,
the three plays,
A Woman of No Importance, Lady Windermere’s Fan,
and
The Importance of Being Earnest,
as well as well as from Wilde’s essays, reviews, and lectures. These quotations present Wilde in the guise of wit and epigrammatist.

Part II presents extended excerpts from plays, novels, and other writings. A few, including
The Ballad of Reading Gaol, “
The Selfish Giant,” and “The American Invasion,” are given in their entirety. They are arranged in chronological order, as published. These excerpts are a sampling of the breadth and depth of Wilde’s literary works.

“
The foremost wit of his age,” Oscar Fingal O’Flahertie Wills Wilde, being the second son of William Wilde, was born on October 16th, 1854, at 21 Westland Row, Dublin.

On leaving Portora Royal School at Enniskillen, he went in 1873 to Trinity College, Dublin, with a scholarship.

On Leaving Oxford he came to London and lived in the Adelphi, where in 1881 he published his first book of poems.

Three years later he married Constance Mary Lloyd, and removed to 16 Tite Street, Chelsea, where he lived until his conviction in 1895.

On his release he went to live in France at Berneval-sur-Mer; later, in February 1898, he moved to Paris, and to Rome in 1900 where the Pope blessed him seven times.

His health was now rapidly deteriorating and on his return to Paris he was baptized into the Catholic Church on November 29th.

Next day, in the presence of his loyal friend Robert Ross, he died
—
“The Miser of sound and syllable, no less than Midas of his coinage.”

Oscar Wilde was buried on December 3rd, 1900, in the little cemetery of Bagneux, but in July, 1909, he was interred at Père Lachaise.

“He hath outsoared the shadow of our night;

Envy and calumny and hate and pain,

And that unrest which men miscall delight

Can touch him not and torture not again.”

Part I The Quotations

An Appreciation of Dostoevski (1887)

The Importance of Being Earnest (1895)

Women love us for our defects. If we have enough of them, they will forgive us everything, even our gigantic intellects.

Memory in a woman is the beginning of dowdiness. One can always tell from a woman’s bonnet whether she has got a memory or not.

If a woman really repents, she has to go to a bad dressmaker, otherwise no one believes in her.

The only way to behave to a woman is to make love to her, if she is pretty, and to someone else, if she is plain.

The Importance of Being Earnest

My husband is a sort of promissory note. I am tired of meeting him.

Men always want to be a woman’s first love. That is their clumsy vanity. We women have a more subtle instinct about things. What we like is to be a man’s last romance.

Nothing spoils romance so much as a sense of humour in the woman.

One should never trust a woman who tells one her real age. A woman who would tell that, would tell one anything.

Lord Illingworth:
What do you call a bad man?

Mrs. Allonby:
The sort of man who admires innocence.

Lord Illingworth:
And a bad woman?

Mrs. Allonby:
Oh! the sort of woman a man never gets tired of.

Lord Illingworth:
The Book of Life begins with a man and a woman in a garden.

Mrs Allonby:
It ends with Revelations.

Young women of the present day seem to make it the sole object of their lives to be always playing with fire.

Lord Illingworth:
Beautiful women never have time. They are always so occupied in being jealous of other people’s husbands!

Talk to every woman as if you loved her; and to every man as if he bored you, and at the end of the first season you will have the reputation of possessing the most perfect tact.

If you want to know what a woman really means—which, by the way, is always a dangerous thing to do—look at her, don’t listen to her.

Women are a fascinatingly wilful sex. Every woman is a rebel, and usually in wild revolt against herself.

Lord Darlington:
It’s a curious thing, Duchess, about the game of marriage—a game, by the way, that is going out of fashion—the wives have all the honours, and invariably lose the odd trick.

Crying is the refuge of plain women but the ruin of pretty ones.

Lord Augustus:
By Jove! you should have heard what [Arabella] said about Mrs. Erlynne. She didn’t leave a rag on her … I told her that didn’t matter much, as the lady in question has an extremely fine figure.

London is full of women who trust their husbands. One can always recognise them. They look so thoroughly unhappy.

Lady Plymdale:
Who is that well-dressed woman talking to Windermere?

Dumby:
Haven’t got the slightest idea! Looks like an
édition de luxe
of a wicked French novel, meant specially for the English market.

With a proper background women can do anything.

If a woman wants to hold a man, she has merely to appeal to what is worst in him.

Wicked women bother one. Good women bore one. That is the only difference between them.

We women, as some one says, love with our ears, just as you men love with your eyes, if you ever love at all.

A woman will flirt with anybody in the world as long as other people are looking on.

There is no pleasure in taking in a husband who never sees anything.

What are called good women may have terrible things in them, mad moods of recklessness, jealousy, sin.

Women … inspire us with the desire to do masterpieces, and always prevent us from carrying them out.

Women never know when the curtain has fallen. They always want a sixth act, and as soon as the interest of the play is entirely over they propose to continue it.

Women are a decorative sex. They never have anything to say, but they say it charmingly.

The plain women are very useful. If you want to gain a reputation for respectability, you have merely to take them down to supper.

As long as [a woman] can look ten years younger than her own daughter, she is perfectly satisfied.

She was a curious woman, whose dresses always looked as if they had been designed in a rage and put on in a tempest.

If a woman can’t make her mistakes charming, she is only a female.

The proper basis for marriage is a mutual misunderstanding.

She tried to found a
salon,
and only succeeded in opening a restaurant.

For the British cook is a foolish woman who should be turned for her iniquities into a pillar of salt which she never knows how to use.

Marriage is the one subject on which women agree and all men disagree.

“A Handbook to Marriage”

Our author, however, is clearly of the same opinion as the Scotch lassie who, on her father warning her what a solemn thing it was to get married, answered, “I ken that, father, but it’s a great deal solemner to be single.”

“A
Handbook to Marriage”

Beauty, as some one finely said, is the purgation of all superfluities.

Miss Prism:
Memory, my dear Cecily, is the diary that we all carry about with us.

The Importance of Being Earnest

Gwendolen:
How absurd to talk of the equality of the sexes! Where questions of self-sacrifice are concerned, men are infinitely beyond us.