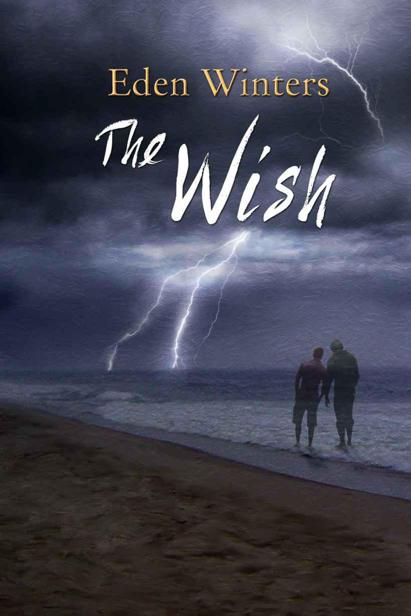 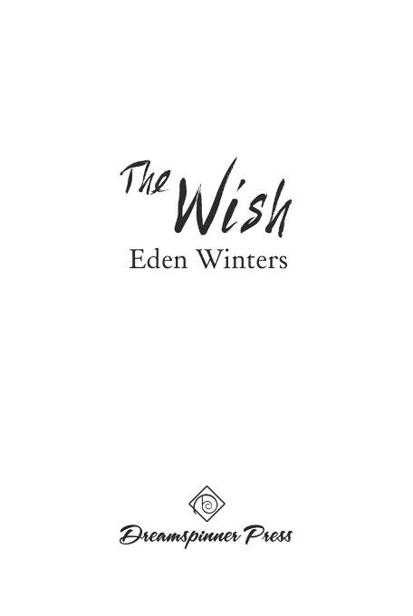 The Wish
Copyright © 2012 by Eden Winters

Many thanks and hugs to my support group: Pam, Meg, Mara, Lynda, Feliz, Jared, John A., John R., Doug, and Chris.

“I
CAN
’
T
believe he’s gone. Even though I knew how sick he was, a part of me thought he’d get better.”

A warm hand on Alfred Anderson’s shoulder accompanied his friend’s words, and he leaned into the gesture in subconscious desperation for the touch of another, now that his lover was gone.

“I thought so too, Douglas. Right up to the end, I never gave up hope.” He still didn’t believe the empty shell lying before them was the one who’d shared his life. He kept expecting to turn and find his partner, healthy and whole again, standing at his side.

The expected sympathy came as if by rote. “Well, if there’s anything I can do….” Anticipated under the circumstances, the words were all the more welcome because of their sincerity. Douglas Sinclair would do anything in his power to make the burden lighter, and Alfred knew it.

The two gentlemen, one elderly, the other not so much so, stood together, dressed in plain black suits befitting the solemn occasion. The weak light of a midwinter’s afternoon bathed them in its soft glow during their brief respite from the arduous tasks ahead. Neither spoke for several moments, as they stood vigil for someone incredibly dear to them both, and who they’d greatly miss.

In a shining mahogany casket before them lay the remains of a man, still handsome despite the ravages of time and cancer. Douglas reached out to stroke a shrunken cheek. “I can’t believe this is actually my baby brother. Half brother. No, brother. How…?” He stopped and swallowed hard. “Who am I going to fight with now?” he cried in despair, sparing an apologetic glance toward Alfred, as if Alfred ever considered the constant scrapping between the two to be real.

“I know, Douglas, I know,” Alfred said, reaching up and giving his friend’s hand an understanding squeeze, knowing full well what Douglas meant. “I’ll certainly miss the show.” Though Alfred’s own way of saying “I love you” was more conventional, the undertones of affection in the good-natured bickering had never eluded him.

After a few moments, Alfred asked, “Would you mind giving us some time alone, please?”

The hand withdrew, and a softly murmured “Of course” preceded Douglas’s departure through the heavy wooden doors separating the secluded parlor from the world outside. Alfred glanced over his shoulder and offered a weary smile, one his friend and de facto brother-in-law returned as he secured the doors behind himself, warning others of the desire for privacy.

Heavy footsteps retreated down the hallway, growing ever fainter. When they faded into nonexistence, Alfred exhaled heavily, running his fingers through his full head of silvery hair, something his lover had enjoyed doing, particularly after Byron’s own once-flame-red locks had thinned and fallen out.

How Byron had mourned the loss of his hair—a casualty of the chemotherapy that failed to save his life. Then his body had begun to wither, and despite Alfred’s best efforts to remain positive, Byron’s inevitable death could no longer be denied.

“I know you wouldn’t agree with me, but I think bald is a good look for you—very macho and sexy,” Alfred whispered, fingers lovingly caressing the smooth pate of the man who’d shared his life for nearly thirty years.

“I didn’t mind the weight loss, either, even if I did miss our afternoons spent by the pool.” Self-conscious about his appearance, toward the end Byron only allowed Alfred and his doctor to see him undressed. And side effects of the unsuccessful chemotherapy had kept him out of the sun, something he’d once loved—slathered with sunscreen, of course, due to milk-white skin that never tanned, only burned.

“You’re still as handsome as you ever were. But as attractive as you were on the outside, your outer beauty paled in comparison to how you were inside. You had the biggest heart of anyone I’ve ever known, and I’m deeply honored you gave it to me.

“It should have been me, you know,” Alfred continued, his fingers now lightly brushing his lover’s pale and cold brow. “I’m twenty-two years older than you. By all rights, you should have been around long after my time. It isn’t fair.” With those words, the tears he’d held back began to fall. Alone with Byron for perhaps the first time in days, Alfred mourned a life cut short by a foe that all the money in the world couldn’t defeat. “I’m sorry, love: I couldn’t let go, so you wouldn’t let go. I’m terribly, terribly sorry.” The last few months had been a kind of hell he’d never imagined. Through the entire ordeal, Byron hung on, readily agreeing to anything the doctor recommended, solely because Alfred wasn’t ready to live without him. “I should have wished you Godspeed and saved you the pain,” Alfred whispered.

Moving a chair to the edge of the casket and snagging several tissues from a conveniently provided box, Alfred felt very much a lonely old man as he wearily dropped onto the padded seat. “I’ll always love you, you know.” He folded his arms against the edge of the polished wood, resting his head on them while gazing down at the person he considered the best thing to ever happen to him. Fifty-four was far too young to die. Fortunately, they’d shared a great life, and while he’d be lonely and miss his lover terribly, the memories they’d made together brought some measure of comfort.

“I’ve given the matter some thought, baby, and I’m going to try to give you what you asked for. I still don’t totally agree with the plan, although I know, as always, that you have everyone’s best interests at heart.” He stood once more, bending from the waist to kiss his lover softly on the cold, painted lips. “I hope you were right when you said they’d be perfect together if only they’d give each other a chance. I know I should have done this when you first asked, but you know how stubborn I can be.” His lips quirked up into a ghost of a smile as he recalled the many times he’d been compared to a four-legged, braying mammal by this same man now lying still and quiet before him. How he’d love to hear the teasing again, just once more.

“They’re both coming here. I’ll make the introductions. The rest will be up to them, and you, if you’re still around.” It warmed his heart to imagine Byron still with him, maybe standing beside him, free from pain and worry, happy and at peace once more.

Despair suddenly crept into his heart, reality sinking in, truly sinking in, that his lover wasn’t there anymore. No, Byron was well and truly gone, leaving Alfred alone probably for the rest of his life, short as that time might be. “Goodbye, my friend, my lover, my life,” he whispered through trembling lips, knuckles whitening from the force with which he clutched the coffin. “You asked something of me, and I’ll do my best to give it to you. However, I want something too. I don’t believe I’ll be long. Would you wait for me?”

Sorrowfully, he recalled the misery the poor man had bravely faced in the name of a few more months, days, and hours. “I’m sorry I wanted you to stay here when you were ready to go; all the pain you endured. But facing life without you….” Words trailing off in a sob, he finally did what he’d needed to do since his partner slipped away: breaking down completely and grieving, for himself, for his lost love, for the memories they’d no longer make.

In his sorrow, he didn’t notice the shadowy figure emerging from behind him—a shadow that shouldn’t exist in the sunlight washing over the room. Sinking back down in his chair, Alfred gripped the casket, oblivious to the shapeless mass taking form behind him, wrapping what appeared to be human arms around his trembling body. Although he took no notice of these things, deep within his heart familiarity blossomed, and he no longer felt so alone.

A
FTER
the rush of friends, family, and the merely curious passed, Douglas escorted him home, where Alfred sat alone in his office, the odd sense of peace settling over him again. The day took a toll on already frayed nerves, to the point where Alfred had been sorely tempted to cast decorum aside and verbally upbraid a thoughtless “mourner” who’d dared suggest he replace his dead lover immediately, and with the man’s own widowed daughter, no less. Apparently the ill-mannered social climber hadn’t noticed Alfred’s recently deceased partner was a man, choosing instead to recall that he’d once been married to a woman, albeit disastrously.

Only the intervention of his dear friend and butler, Bernard, kept Alfred’s name out of tomorrow’s headlines. That is, if he wasn’t already destined for front-page notoriety for the passing of his “long-time companion,” as polite company deemed his relationship. In total defiance of his privileged upbringing, he snorted at the notion of Byron being anything other than what he was—Alfred’s husband—in the eyes of anyone who mattered.

Oh, he’d tried to please his elitist parents, marrying a rich, shallow heiress with even less desire for him than he’d had for her. Theirs was a delicately balanced arrangement, one suitable to them both. While they remained childless, as a couple who refused to touch each other would be, they made their families happy, or as happy as upper-crust sensibilities allowed. Their agreement kept his and Susan’s sizeable trust funds intact while providing them each with a built-in escort for social functions.

Susan grew careless, and when the scandal broke, she bore the brunt of public scorn and he received pitying gazes from some and knowing smirks from others. Throughout the accusations and innuendo, he’d done his best to stand by and support the woman who shared his name and little else. In the end she’d quietly filed for divorce before retiring from public life, taking her now notorious inamorata with her—a club singer of dubious background. Now, decades later, Alfred finally realized something genuine must have existed in Susan’s relationship with the entertainer, for the two women had remained together until Susan’s death three years earlier.