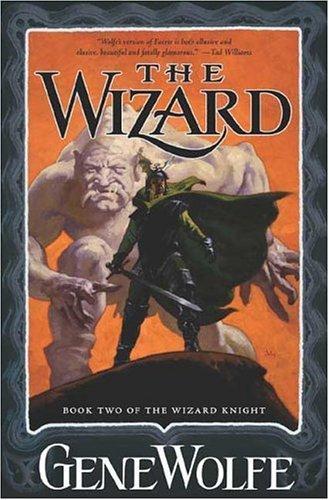 A novel in two volumes, *The Wizard Knight* is in the rare company of those works which move past the surface of fantasy and drink from the wellspring of myth. Magic swords, dragons, giants, quests, love, honor, nobility-all the familiar features of fantasy come to fresh life in this masterful work.

The first half of the journey, *The Knight* -- which you are advised to read first, to let the whole story engulf you from the beginning -- took a teenage boy from America into Mythgarthr, the middle realm of seven fantastic worlds. Above are the gods of Skai; below are the capricious Aelf, and more dangerous things still. Journeying throughout Mythgarthr, Able gains a new brother, an Aelf queen lover, a supernatural hound, and the desire to prove his honor and become the noble knight he always knew he would be.

Coming into Jotunland, home of the Frost Giants, Able -- now Sir Able of the High Heart --claims the great sword Eterne from the dragon who has it. In reward, he is ushered into the castle of the Valfather, king of all the Gods of Skai.

Thus begins the second part of his quest. *The Wizard* begins with Able's return to Mythgathr on his steed Cloud, a great mare the color of her name. Able is filled with new knowledge of the ways of the seven-fold world and possessed of great magical secrets. His knighthood now beyond question, Able works to fulfill his vows to his king, his lover, his friends, his gods, and even his enemies. Able must set his world right, restoring the proper order among the denizens of all the seven worlds.

*The Wizard* is a charming, riveting, emotionally charged tale of wonders, written with all the beauty one would expect from a writer whom Damon Knight called "a national treasure." If you've never sampled the works of the man Michael Swanwick described as "the greatest writer in the English language alive today," the two volumes of *The Wizard Knight* are the perfect place to start.

THE WIZARD: BOOK TWO OF THE WIZARD KNIGHT

Dedicated with love and respect to Lord Dunsany, author of "THE RIDERS"

"You asked to become a knight, not an expert on knighthood. To train you further would make you into a scholar, not a fighting man. What remains for you to learn you must learn by living and doing."

YVES MEYNARD, The Book of Knights

Ben, I was not going to put in another list of names, but I thought what if he does not get the first part? So here is another. If you got the first half of my letter, you will remember who Disiri is, and Bold Berthold, and a lot of the others. But I have put them in anyway just in case. Not every name is here. I am sure I missed a few, and some don't matter.

able This is what they call me here. It is really the name of Berthold's brother, whom Disiri switched for me. a e l f The people Kulili made. aelfrice The world under Mythgarthr, where I am now. ag r Marder's marshal. alvit The valkyrie who carried me to Skai. amabel The woman who saved Payn when his mother died. angrborn The giants of the ice country (Jotunland). arn One of Garvaon's archers. arnthor The king. His father was a human king, but his mother was a water dragon. Setr was his brother. baki The Aelfmaid who healed me with her blood. b e e l The ambassador Arnthor sent to Jotunland.