Read The Woman of Andros and The Ides of March Online

The Woman of Andros and The Ides of March

BOOK: The Woman of Andros and The Ides of March
>>DOWNLOAD HERE >>READ ONLINE NOW
ads 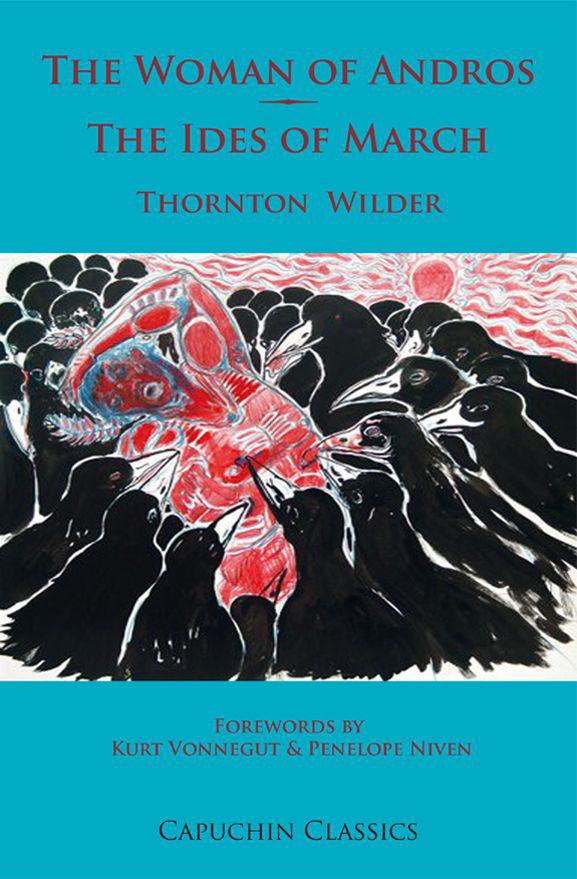 THE WOMAN OF ANDROS

THE IDES OF MARCH

T
HE
W
OMAN OF
A
NDROS

Reprinted by arrangement with The Wilder Family LLC

and The Barbara Hogenson Agency, Inc.

Afterword © 2006 by Tappan Wilder, Literary Executor The Afterword to this volume is constructed in large part from unpublished material drawn from Thornton Wilder Archive at Yale University’s Beinecke Rare Book and Manuscript Library, supplemented by Wilder family holdings and published sources not easy to come by. The author’s literary executor hopes that readers will fi nd that this approach brings the novel and its creator into view in an informed and intimate fashion. Readers are referred to
www.thorntonwilder.com
for additional information.

T
HE
I
DES OF
M
ARCH

Reprinted by arrangement with The Wilder Family LLC

and The Barbara Hogenson Agency, Inc.

Afterword © 2003 by Tappan Wilder, Literary Executor The Afterword to this volume is constructed in large part from unpublished material drawn from Thornton Wilder Archive at Yale University’s Beinecke Rare Book and Manuscript Library, supplemented by Wilder family holdings and published sources not easy to come by. The author’s literary executor hopes that readers will fi nd that this approach brings the novel and its creator into view in an informed and intimate fashion. Readers are referred to
www.thorntonwilder.com
for additional information.

All rights reserved. No part of this publication may be reproduced, stored in a retrieval system, or transmitted in any form or by any means, electronic, mechanical, photocopying, recording, or otherwise, without the prior permission of the copyright owner.

O
n a manuscript draft of his third novel,
The Woman of Andros,
Thornton Wilder wrote that the idea first came to him in the spring of 1928. The first two ‘conversations’ in the book were written at Axeland House, Horley, Surrey, where he and his mother and two of his three sisters spent several months after the great success of his second novel,
The Bridge of San Luis Rey.
He planned ‘much of the later parts’ of
The Woman of Andros
while attending services in Surrey churches – Redhill and Outwood in particular. By October 11, 1928 he was at the Pension Saramartel in Juan-les-Pins, making a clean copy of the completed sections of the novel.

Wilder was always writing as he travelled – or travelling as he wrote. He continued the work on
The Woman of Andros
in New Haven, Connecticut, in April 1929, and, during that summer at the MacDowell Colony, a retreat for artists, writers and musicians in Peterborough, New Hampshire. From Peterborough, he wrote one of his first letters about his work to a new friend, Lady Sybil Colefax. Their friendship and correspondence would last until her death in 1950. He told her that Chrysis, the Woman of Andros, was ‘developing into a sort of Dr. Johnson,’ full of sayings and parables. In September and October 1929, Wilder wrote in London at the Hotel Savoy, and in Oxford, Paris and Munich. He finished the novel January 4, 1930, in the Biltmore Hotel in Los Angeles.

Wilder described
The Woman of Andros
as his first novel, ‘in the sense,’ he said, ‘that the others were collections of tales, novelettes, bound together by a slight tie that identified them as belonging to the same group.’ Albert & Charles Boni, Inc. published the book February 21, 1930 – 30,000 copies in a prepublication printing, and 20,000 more on the day of publication. The book flap copy quoted the
Boston Evening Transcript
critic who had hailed Wilder as one of the ‘most discussed figures in the English speaking world.’

By the time Wilder had finished his third novel, he had enjoyed a wealth of new experiences and friendships, as well as international celebrity, and enough of a fortune to build a house for his family in Hamden, Connecticut, and otherwise support his parents and three sisters. He had seen the first New York production of one of his plays,
The Trumpet Shall Sound
; had published
The Angel That Troubled The Waters,
a collection of his early short plays; and had toured the country as a platform lecturer with resounding success, speaking to full houses on ‘The Relation of Literature and Life,’ ‘The Future of American Literature,’ ‘Enthusiasms and Disappointments of Play-Going,’ and other topics. (His lecture agent, who also represented Hugh Walpole, arranged for the two novelists to debate whether fiction or non-fiction shed more light on the human experience. Four thousand people attended the debate in Washington, D. C.)

By 1930 Wilder had bought his first automobile, had struck up friendships with two other young novelists making their mark, Ernest Hemingway and Scott Fitzgerald, and had taken an internationally publicised ‘walking tour’ in Europe with world heavyweight boxing champion Gene Tunney (‘as fine a person as you’d want to meet,’ Wilder wrote to Hemingway before the trip). When Fitzgerald wrote to Wilder about
The Bridge of San Luis Rey,
Wilder answered with an autobiographical snapshot:

I have been an admirer, not to say a student, of
The Great Gatsby
too long not to have got a great kick out of your letter. It gives me the grounds to hope that we may sometime have some long talks on what writing’s all about. As you see I am a provincial school-master and have always worked alone. And yet nothing interests me more than thinking of our generation as a league and as a protest to the whole cardboard generation that precedes us from Wharton through Cabell and Anderson and Sinclair Lewis.. . . I like teaching a lot and shall probably remain here for ages; a daily routine is necessary to me. I have no writing habits, am terribly lazy and write seldom.

With typical self-deprecation, Wilder underplayed his discipline as a writer, for his journals and letters testify to his habitual absorption in his work. As he wrote
The Woman of Andros,
based in part, he said, on a Greek comedy by Terence, Wilder was immersed in Greek drama and philosophy, spending time in ancient Greece in his imagination, his reading, and his preparations for lectures he would give at the University of Chicago, when he became a part-time faculty member in 1930. On a trip to England, in September 1929, he sketched ideas for the lectures in his journal: ‘What fifth century Greece thought of itself; how it was viewed by successive ages and by modern archeology; how it was viewed by “specific great authors.” ’ He wanted to learn Greek, and he was re-reading Aeschylus and Euripides.

Wars of the Irish Kings by David W. McCullough
A Pretext for War by James Bamford
The Alchemyst by Michael Scott
The Real Boy by Ursu, Anne
Stable Witch by Bonnie Bryant
Wild Ride by Matt Christopher, Stephanie Peters
Grudging by Michelle Hauck
Blood Beast by Darren Shan
When We Were Us (Keeping Score, #1) by Tawdra Kandle
Brodie's Gamble by Shirleen Davies
Our partner