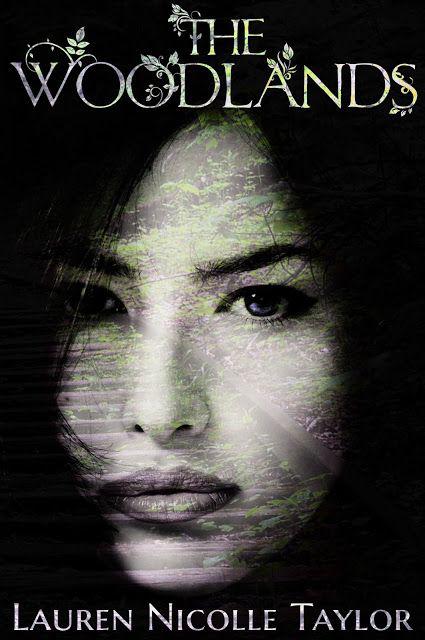 All rights reserved. No part of this book may be used or reproduced in any manner whatsoever without written permission except in the case of brief quotations embodied in critical articles or reviews. For information address:

For more information about our content disclosure, please utilize the QR code above with your smart phone or visit us at
www.cleanteenpublishing.com
.

For my friend Chloe,

without whom The Woodlands would never have

made
it out of the desk drawer.

And for my husband Michael,

you
are my Joseph.

When I was eight years old, I got the distinct and unsettling impression I was unsuited to life in Pau Brazil. That my life would go off like the single firework on Signing Day. A brilliant burst of shimmering color and noise that exploded in the sky momentarily, then disappeared into the black night air.

A slip of yellow paper shot under the door in the evening, spinning across the floor like a flat top and colliding with my father
’s foot. It was an official notice informing everyone that Superior Grant was visiting in three days’ time. He had a special announcement to make.

Citizens scrambled
to make their lawns more perfect than they were before. Uniforms were pressed and cleaned. All the children were expected to line up around the edges of the center Ring and await the great man himself.

I was excited
, but my excitement had an edge of terror to it—this was a Superior. My father warned me to not get my hopes up.

“
He’s just a man, like the rest of us,” my father said as he knelt down to adjust my oversized uniform and tighten my ribbon.

My mother tsked and fussed around in the kitchen.
“Pelo, don’t say things like that to her. I don’t want you filling her head with your ridiculous ideas.”

His eyes darted to her for a second but then he locked on me.
“Ideas are never ridiculous. Ideas are just that, ideas. Putting them into practice… now that’s when things get ridiculous,” he smirked.

I
drew my eyebrows together, confused. He patted my head and took my hand. “C’mon, let’s get this farcical procession over with.”

“
Pelo!” My mother’s angry foot stomp clacked on the tiles.

He put his hands up in the air
in surrender. “All right, all right. I’ll behave,” he said, and then he winked at me. I beamed up at him. He was a shiny hurricane and I was happy to be swept away.

They were going to choose a child to come forward and a
sk Grant a question. Our nervous teachers had given each student a card with an innocuous question on it. I looked down at the printed piece of yellow cardboard. Mine said, ‘Superior Grant, how does it feel to be the descendant of the brilliant founder of the Woodlands?’ I frowned. I knew that Grant was descended from President Grant of the United States of Something or Other. We learned that at school. We were also taught that Grant was the initiator of the treaty; he orchestrated the signing in the last days of the Race War and negotiated peace. But this question was boring and I was sure no one would care about the answer. I would much rather have asked him what kind of food Superiors got to eat. Were they stuck with the hundred-year-old canned foods we were? The globs of vegetable that came out in one solid, gelatinous lump, identifiable only by their difference in color, as most of the labels had peeled off years ago. Green could be, but was not reserved exclusively, for peas. Orange for carrots, or maybe pumpkin. It goes on—an exciting Woodlands guessing game for ages four and up.

In my mind the Superiors must have been super
-people. Beautiful, tall, and powerful.

I could barely contain my disappointment when Superior Grant stepped out of the helicopter. He was regular sized
and a little overweight. He was handsome, but not like my father. It was the kind of handsomeness that required maintenance. Grey, slicked-back hair, manicured beard. He had the black military uniform on. Gold tassels swung festively in the wind created by the slowing chopper blades.

Despite
this, I still wanted him to pick me. I leaned into the circle, standing on my tiptoes. My parents were a few rows behind me, heads bowed solemnly.

I kept my eyes down when
Grant came close, trying my hardest not to bounce up and down like some of the other kids who were reeling with nervous energy. When the boots stopped in front of me, I stopped breathing, still staring at my feet.

A policeman
tapped me on the shoulder sharply with a baton and said, “You. Ask your question.” I couldn’t believe it. And very suddenly didn’t want to.

I rubbed my shoulder and
looked up into Superior Grant’s face, taking in his tight forehead and even tighter jaw. I tipped my head to the side, wondering what made him so special. When I realized I shouldn’t be staring, I cast my eyes towards my shaking cardboard question, barely able to see the typed words that seemed to want to jump off the page. I opened my mouth to speak but the way he was eyeing me made me freeze, the question sitting on my lips like an un-blown bubble. It was like I had suddenly grown extra limbs or had spots all over my face because his nose scrunched up and his eyes watered like he thought I was diseased.

He took a step closer and peered into my face. I leaned away, the musty
, vinegary smell of his breath overpowering. “What’s wrong with her eyes?” he said in a strange drawn out twang, like ‘whaat’s wrawng with her eyeees?’

I felt anger rising inside me
like an over-boiling pot. I glared at him. My father had taught me that my eyes were nothing to be ashamed of. It was uncommon but it didn’t mean there was anything wrong with me. I had one blue eye and one brown. So did my father. Grant raised an eyebrow, unperturbed by my narrowed eyes and reddening face. He placed his hand on my eyelid and lifted it, straining my eye socket. Then he moved to the other eye and did the same. I shook my head free of him and before I knew what I was doing, I smacked his hand away.

I heard a couple of people in the crowd laugh but the rest seemed to have simultaneously stopped breathing. Behind m
e someone was moving through. Grant smiled down at me cruelly.

“
Poor decision, child,” he said smoothly. Then he turned and walked away.

I barely had time to process my mistake when a
policeman grabbed me by the scruff of my neck and pulled me upwards to face the crowd. He rattled me around like a bag of apples and I could feel my inside bruising.

“
See here. Here is lesson for all of you of how NOT to behave in the presence of Superior Grant.”

I saw my father
’s wobbling figure moving towards me like a mirage.

As
my brain started to whip into a milkshake in my skull, it occurred to me that I shouldn’t have done what I’d just done. It also occurred to me in a dangerous revelation, that I wasn’t sorry at all.

Somehow my father managed to negotiate my release. Besides
, the Guardian seemed anxious to catch up to Grant, who was moving on to the next group of children. He dragged me through the crowd and we crouched behind the stone wall of Ring One, listening to the faint, quivering voice of a child asking her question. “How do you weigh your wisdom against your strength, Superior Grant?” I had the odd thought—how could wisdom weigh anything?

My father
clasped his strong dark hands around my face worriedly, turning it from side to side. “Are you all right?”

I nodded, fierce tears running down my face.
“I think so. I didn’t like him very much.”

He shook his head
, but amusement twisted his face, “You want to know a secret?” I nodded and he leaned down to my ear. “I don’t like him very much either,” he whispered.

The crackling and whining that always preceded an announcement on the PA system started and the Superior Grant
’s elegant voice carried out over the sea of people.

“
I am here to announce the Superiors have decided large families pose a direct threat to the security of the Woodlands. Brothers, sisters, and the bonds that result create an US versus THEM culture, which is unacceptable and in direct opposition with All Kind.” He sounded bored as he talked. “Hence, we will allow each couple to house only one child at a time. This is not negotiable and any violations will be strictly dealt with.”

The crowd murmured but that was the extent of their opposition.

Then he said, “Have your elder children available for collection by tomorrow morning.”

The crowd hummed and then an angry voice splashed out and fell flat on the stones.
“You can’t take our children!” Other voices began to rustle like the crackle of shifting leaves.

I took a step up onto the ledge of the wall to get a better look. I watched as a
policeman moved slowly but deliberately towards the man that shouted, with a face like horror. He took his baton and clapped the side of the man’s head, hard, to show they could do whatever they wanted. As it cracked, an arc of blood sprayed onto the faces of people closest, like droplets of red rain. The crowd fell back from the man’s crumpled body in a wave. A woman screamed and threw herself down beside him. The policeman joined the others, twirling his baton around in his hand and wiping the blood off on his pants. Everything went quiet, like the guardian had swished all the air out of the circle. If there were birds, even they would have ceased to breathe.

I looked to my father for his reaction. His face was white, his whole body shaking with anger, his mouth open slightly like he wanted to speak.
Don’t speak
, I prayed.

He crouched down and shouted through
the gaps between people’s legs, “President Grant is an insane dictator!” then stood up quietly and did a brilliant impression of a normal, frightened person. The policeman’s head snapped around and searched the crowd but no one was willing to point him out; they didn’t want to be punished.

He pulled me to him tightly and I clung on
to his leg.

“
Are they going to take me away?” I asked naively.

“
No beautiful girl,” he whispered. “You are all we have.”

When we got home my parents fought like never before. I stayed in my room with my ear pressed to the wall. I couldn
’t hear my mother at all but I caught my father’s response to everything she said.

“
Yes, but she’s a child. She’ll learn to control herself.”

“
Yes, exactly like me. I’m still here aren’t I? You’re being absurd. She needs her father.”

The next morning at school, my class was half-empty and half-full of red-eyed, stain-cheeked children who had lost their brothers and sisters.