The World in Six Songs: How the Musical Brain Created Human Nature 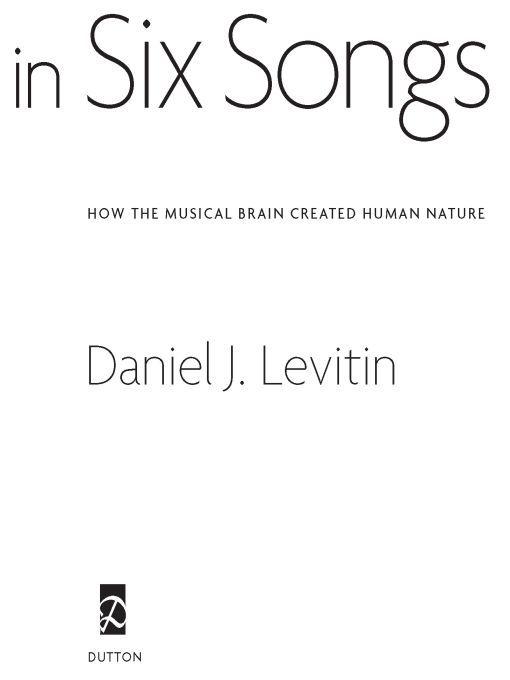 Table of Contents
Title Page
Copyright Page
CHAPTER 1 - Taking It from the Top or “The Hills Are Alive . . .”
CHAPTER 2 - Friendship or “War (What Is It Good For?)”
CHAPTER 3 - Joy or “Sometimes You Feel Like a Nut”
CHAPTER 4 - Comfort or “Before There Was Prozac, There Was You”
CHAPTER 5 - Knowledge or “I Need to Know”
CHAPTER 6 - Religion or “People Get Ready”
CHAPTER 7 - Love or “Bring ’Em All In”
Notes
Acknowledgements
Index
About the Author
ALSO BY DANIEL J. LEVITIN
This Is Your Brain on Music: The Science of a Human Obsession 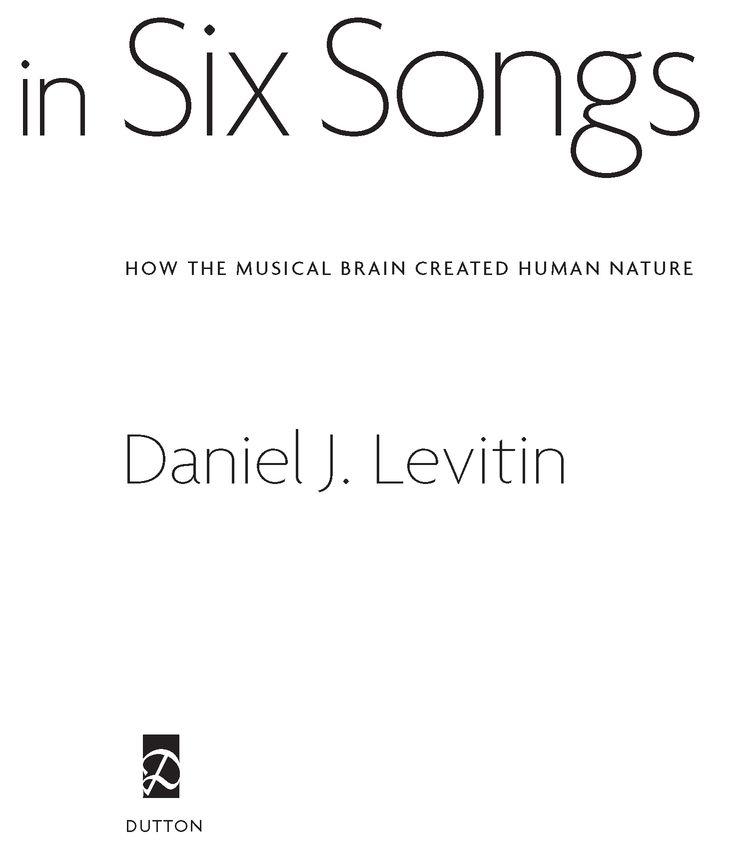 REGISTERED TRADEMARK—MARCA REGISTRADA
LIBRARY OF CONGRESS CATALOGING-IN-PUBLICATION DATA
Levitin, Daniel J.
The world in six songs: how the musical brain created human nature / Daniel J. Levitin. p. cm.
Includes bibliographical references and index.
eISBN : 978-1-101-04136-9
1. Music—Psychological aspects. 2. Music—Social aspects. 3. Music—Origin. I. Title.
ML3838.L48 2008
781’.11—dc22 2008012298
Without limiting the rights under copyright reserved above, no part of this publication may be reproduced, stored in or introduced into a retrieval system, or transmitted, in any form, or by any means (electronic, mechanical, photocopying, recording, or otherwise), without the prior written permission of both the copyright owner and the above publisher of this book.
The scanning, uploading, and distribution of this book via the Internet or via any other means without the permission of the publisher is illegal and punishable by law. Please purchase only authorized electronic editions, and do not participate in or encourage electronic piracy of copyrighted materials. Your support of the author’s rights is appreciated.
While the author has made every effort to provide accurate telephone numbers and Internet addresses at the time of publication, neither the publisher nor the author assumes any responsibility for errors, or for changes that occur after publication. Further, the publisher does not have any control over and does not assume any responsibility for author or third-party Web sites or their content.

CHAPTER 1
Taking It from the Top or “The Hills Are Alive . . .”
O
n my desk right now I have a stack of music CDs that couldn’t be more different: an eighteenth-century opera by Marin Marais whose lyrics describe the gory details of a surgical operation; a North African griot singing a song, offered to businessmen passing by in the hopes of securing a handout; a piece written 185 years ago that requires 120 musicians to perform it properly, each of them reading a very specific and inviolable part off of a page (Beethoven’s Symphony no. 9). Also in the pile: forty minutes of groans and shrieks made by humpback whales in the Pacific; a North Indian raga accompanied by electric guitar and drum machine; a Peruvian Andes vocal chorus of how to make a water jug. Would you believe an ode to the gustatory pleasures of homegrown tomatoes?

That all these are music may seem self-evident to some, or the stuff of argument to others. Many of our parents or grand-parents or children say that the music
we
listen to isn’t music at all, it’s just noise. Noise by definition is a set of sounds that are random, confused, or uninterpretable. Could it be that all sound is potentially musical if only we could understand its internal structure, its organization? This is what the composer Edgar Varèse was driving at when he famously defined music as “organized sound”—what sounds like noise to one person is music to another, and vice versa. In other words, one man’s Mozart is another’s Madonna, one person’s Prince is another’s Purcell, Parton, or Parker. Perhaps there is a key to understanding what is common to all these collections of sounds, and to what has driven humans since the beginning to engage with them so deeply as not just sound but music.
Music is characterized both by its ubiquity and its antiquity, as the musicologist David Huron notes. There is no known culture now or anytime in the past that lacks it, and some of the oldest human-made artifacts found at archaeological sites are musical instruments. Music is important in the daily lives of most people in the world, and has been throughout human history. Anyone who wants to understand human nature, the interaction between brain and culture, between evolution and society, has to take a close look at the role that music has held in the lives of humans, at the way that music and people co-evolved. Musicologists, archaeologists, and psychologists have danced around the topic, but until now, no one has brought all of these disciplines together to form a coherent account of the impact music has had on the course of our social history. This book is a lot like making a family tree, a tree of musical themes that have shaped our ancestors’ lives: their working days, their sleepless nights—the soundtrack of civilization.
Anthropologists, archaeologists, biologists, and psychologists all study human origins, but relatively little attention has been paid to the origins of music. I find that odd. Americans spend more money on music than they do on prescription drugs or sex, and the average American hears more than five hours of music per day. We know now that music can affect our moods and our brain’s chemistry. On a day-to-day level, a better understanding of the common history between music and humanity can help us to better understand our musical choices, our likes and dislikes, to harness the power of music to control our moods. But far more than that, understanding our mutual history will help us to see how music has been a shaping force, how music has been there to guide the development of human nature.
The World in Six Songs
explains, at least in part, the evolution of music and brains over tens of thousands of years and across the six inhabited continents. Music, I argue, is not simply a distraction or a pastime, but a core element of our identity as a species, an activity that paved the way for more complex behaviors such as language, large-scale cooperative undertakings, and the passing down of important information from one generation to the next. This book explains how I came to the (some might say) radical notion that there are basically six kinds of songs that do all of this. They are songs of friendship, joy, comfort, knowledge, religion, and love.
In trying to understand the evolution of humanity and the role that music has played in it, it seems wise to begin with open minds (and ears) and not exclude any form of music too soon. However, the evolution of mind and music is easiest to follow in music that involves lyrics, because the meaning of the musical expression is less debatable. When the notes are hung on words (or is it that the words are hung on notes?), the meaning is easier to talk about usefully. Because music wasn’t recorded until about a hundred years ago, nor even accurately notated until a few hundred years before that, the historic record of music is substantially lyrics. For these two reasons, music with lyrics will be the predominant focus of
The World in Six Songs.
Much of the world’s music is now available on compact disc, or on the medium that is rapidly replacing it, digitized sound files on computers (generically—and somewhat inaccurately—referred to as MP3s). We live in a time of unprecedented access to music. Virtually every song ever recorded in the history of the world is available on the Internet somewhere—for free. And although recorded music represents only a small proportion of all the music that has ever been sung, played, and heard, there is so much of it—estimates suggest 10 million songs or more—that recorded music is as good a place as any to start to talk about the music of the world. Thanks to intrepid musicologists and anthropologists, even rare, indigenous, and preindustrial music is now available to us. Cultures that have been cut off from industrialization and Western influence have had their music preserved, and by their own accounts, it may have been unchanged for many centuries, giving us a window into the music of our ancestors. The more I listen to music like this and to Western artists that are new to me, the more conscious I become of how large music is and how much there is to know.
ADS
15.4Mb size Format: txt, pdf, ePub

El viaje al amor by Eduardo Punset
She's Leaving Home by William Shaw
Final Destination III by Nelle L'Amour
Case of the Glacier Park Swallow by Anastasio, Dina
The Rebellion of Jane Clarke by Sally Gunning
Thief of Always by Clive Barker
Nanny McPhee and the Big Bang by Emma Thompson
I Was There the Night He Died by Ray Robertson
Slow Ride by Erin McCarthy
Third Time's the Bride! by Merline Lovelace
Our partner