Read There's Something I Want You to Do Online

There's Something I Want You to Do 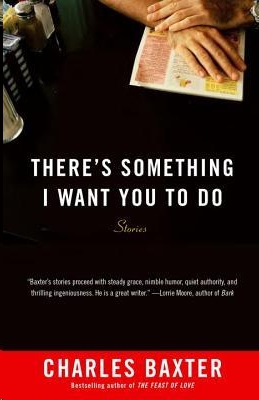 The Feast of Love

Through the Safety Net

Harmony of the World

Imaginary Paintings and Other Poems

The Art of Subtext: Beyond Plot

Burning Down the House

A William Maxwell Portrait
(with Edward Hirsch and Michael Collier)

The Business of Memory: The Art of Remembering in an Age of Forgetting

Bringing the Devil to His Knees: The Craft of Fiction and the Writing Life
(with Peter Turchi)

The Collected Stories of Sherwood Anderson

All rights reserved. Published in the United States by Pantheon Books, a division of Random House LLC, New York, and in Canada by Random House of Canada Limited, Toronto, Penguin Random House companies.

There’s something I want you to do : stories / Charles Baxter.

For Daniel and Hannah Baxter and for Arturo Steely

It is common knowledge that nobody is born with a decalogue already formed, but that everyone builds his own either during his life or at the end, on the basis of his own experiences, or of those of others which can be assimilated to his own; so that everybody’s moral universe, suitably interpreted, comes to be identified with the sum of his former experiences, and so represents an abridged form of his biography.

When she was a teenager, her junior year, her favorite trick involved riding in cars with at least two other girls. You needed a female cluster in there, and you needed to have the plainest one driving. They’d cruise University Avenue in Palo Alto until they spotted some boys together near a street corner. Boys were always ganged up at high-visibility intersections, marking territory and giving off cigarette smoke and musk. At the red light, she’d roll down the window and shout, “Hey, you guys!” The boys would turn toward the car slowly—
very
slowly—trying for cool. Smoke emerged from their faces, from the nose or mouth. “Hey! Do you think we’re pretty?” she’d shout. “Do you think we’re cute?”

Except for the plain one behind the wheel, the girls she consorted with
were
cute, so the question wasn’t really a test. The light would turn green, and they’d speed away before the boys could answer. The pleasure was in seeing them flummoxed. Usually one of the guys, probably the sweetest, or the most eager, would nod and raise his hand to wave. Susan would spy him, the sweet one, through the back window, and she’d smile so that he’d have that smile to hold on to all night. The not-so-sweet good-looking guys just stood there. They were accustomed to being teased, and they always liked it. As for the other boys—well, no one ever cared about them.

Despite what other girls said, boys were not all alike: you had to make your way through their variables blindly, guessing at hidden qualities, the ones you could live with.

Years later, in college, her roommate said to her, “You always go for the
kind
ones, the
considerate
ones, those types. I mean, where’s the fun? I hate those guys. They’re so
humane,
and shit like that. Give me a troublemaker any day.”

“Yeah, but a troublemaker will give
you
trouble.” She was painting her toenails, even though the guys she dated never noticed her toenails. “Trouble comes home. It moves in. It’s contagious.”

“I can take it. I’m an old-fashioned girl,” her roommate said with her complicated irony.

Susan married one of the sweet ones, the kind of man who waved at you. At a San Francisco art gallery on Van Ness, gazing at a painting of a giant pointed index finger with icicles hanging from it, she had felt her concentration jarred when a guy standing next to her said, “Do you smell something?”

He sniffed and glanced up at the ceiling. Metaphor, irony, a come-on? As a pickup line, that one was new to her. In fact, she
had
smelled a slightly rotten-egg scent, so she nodded. “We should get out of here,” he said, gesturing toward the door, past the table with the wineglasses and the sign-in book. “It’s a gas leak. Before the explosion.”

“But maybe it’s the paintings,” she said.

“The paintings? Giving off explosive gas? That’s an odd theory.”

“Could be. Part of the modernist assault on the audience?”

He shrugged. “Well, it’s rotten eggs or natural gas, one of the two. I don’t like the odds. Let’s leave.”

On the way out, he introduced himself as Elijah, and she laughed and spilled some white wine (she had forgotten she was holding a glass of it) onto her dress just above the hemline. He handed her a monogrammed handkerchief that he had pulled out of some pocket or other, and the first letter on it was
E,
so he probably was an Elijah after all. A monogrammed handkerchief! Maybe he had money. “Here,” he said. “Go ahead. Sop it up.” He hadn’t tried to press his advantage by touching the handkerchief against the dress; he just handed it over, and she pretended to use it to soak up the wine. With the pedestrians passing by and an overhead neon sign audibly humming, he gave off a blue-eyed air of benevolence, but he also looked on guard, hypervigilant, as if he were an ex-Marine. God knows where he had found the benevolence, or where any man ever found it.

“Elijah.” She looked at him. In the distance a car honked. The evening sky contained suggestions of rain. His smile persisted: a sturdy street-corner boy turned into a handsome pensive man but very solid-seeming, one thumb inside a belt loop, with a streetlamp behind him giving him an incandescent aura. Physically, he had the frame of a gym rat. She had the odd thought that his skin might taste of sugar, his smile was so kind. Kindness had always attracted her. It made her weak in the knees. “Elijah the prophet? Who answers all questions at the end of time? That one? Your parents must have been religious or something.”

ally, bored by the topic. “ ‘Or something’ was exactly what they were. They liked to loiter around in the Old Testament. They trusted it. They were farmers, and they believed in catastrophes. But when you have to explain your own name, you…well, this isn’t a rewarding conversation, is it?” He had a particularly deliberate way of speaking that made him sound as if he had thought up his sentences several minutes ago and was only now getting around to saying them.

She coughed. “So what do you do, Elijah?”

“Susan,” she said. “So much for the introducti

ons.” She leaned forward, showing off her great smile. “This wine. It’s so bad. I’m kind of glad I spilled it. Shall I spill more of it?” She hadn’t had more than a sip, but she felt seriously drunk.

“Well, you could spill it here.” He reversed his index finger and lifted up his necktie. “Or there.” He pointed at the sidewalk.

The Dragon Round by Stephen S. Power
Lord John and the Hand of Devils by Diana Gabaldon
Pretty Bitches by Ezell Wilson, April
Married Sex by Jesse Kornbluth
The Great Trouble by Deborah Hopkinson
That Summer (Part Two) by Lauren Crossley
Fire for Effect by Kendall McKenna
Nowhere to Run by Franklin W. Dixon
Mama Ruby by Monroe, Mary
The Idiot Girls' Action-Adventure Club by Laurie Notaro
Our partner