Read These Boots Are Made for Stalking Online

These Boots Are Made for Stalking

BOOK: These Boots Are Made for Stalking
>>DOWNLOAD HERE >>READ ONLINE NOW
ads 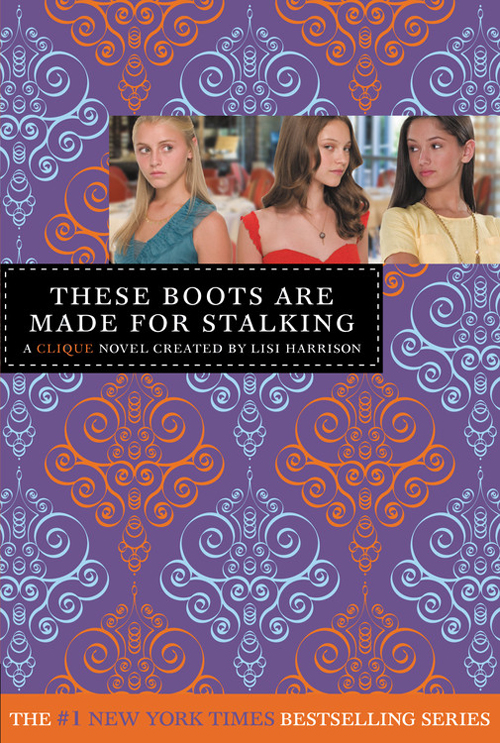 THE PRETTY COMMITTEE STRIKES BACK

IT’S NOT EASY BEING MEAN

SEALED WITH A DISS

P.S. I LOATHE YOU

CHARMED AND DANGEROUS: THE RISE OF THE PRETTY COMMITTEE

THESE BOOTS ARE MADE FOR STALKING

If you like THE CLIQUE, you may also enjoy:

The
Poseur
series by Rachel Maude

The
Secrets of My Hollywood Life
series by Jen Calonita

Poppy is an imprint of Little, Brown and Company.

The Poppy name and logo are trademarks of Hachette Book Group, Inc.

CLIQUE
®
is a registered trademark of Alloy Media, LLC.

THE BLOCK ESTATE: OUTSIDE THE GUESTHOUSE

An Excerpt from ALPHAS by Lisi Harrison

For Bee Bee, the ah-dorable four-legged inspiration for
Bark Obama and Bean Block.

And, of course, Meg Haston. You are truly ah-mazing.

“Rate my costume,” Massie Block demanded, spinning around in a circle so the Pretty Committee could see her black silk Theory
jumpsuit and red patent-leather Brian Atwood pumps from every angle. Hands on hips, she ran her tongue over her fang-enhanced
smile and dared her friends to give her anything less than a 9.2.

Alicia Rivera and Dylan Marvil conferred like they were front-row fashion critics and Merri-Lee Marvil’s two-story walk-in
closet was the main tent at Bryant Park. Dylan’s mom had given the girls permission to accessorize their Halloween costumes
with anything from her closet that had passed the
BEST IF WORN BY
tags dangling from their hangers.

“To
die
for.” Kristen Gregory grabbed a lacy camisole that hung from the crystal wall sconce like a cobweb.

Without warning, an electric shiver shimmied down Massie’s spine. Maybe it was the sting of her new lip-plumping Glossip Girl
Bite Me Berry stain. Maybe it was the eerie flicker of the Belle Fleur Cacao Tabaq soy candles Dylan had lit to get her friends
in the Halloween spirit. Or maybe it was the thrill of knowing that the Pretty Committee was back together and tighter than
Massie’s abs after a two-hour Zumba-thon.

Alicia lifted her palm and Massie leaned down to victory-five it. When their palms met, waves of understanding flowed between
them. Without saying a word, it was clear that Alicia would never try to be the alpha of her own clique again, like she’d
done with the Soul-M8s, her failed boy-girl clique. And Massie would try to be a little less Bumble & Bumble super-hold hairspray
and a little more Frederic Fekkai flexible hold.

“Are you sure Landon won’t think it’s juvenile?” Massie asked, adjusting her black lace gloves. Now that she had an ah-dorable,
fashion-savvy ninth-grade crush, the margin for fashion error was slimmer than a pair of J Brand Skinny jeans.

“Did you ask him to go trick-or-treating yet?” Kristen pushed herself to her feet, then teetered to the far wall in platform
Jimmy Choos to riffle through the hanging clothes. Polaroids of Merri-Lee wearing the outfits hung from the hangers, expiration
dates inked in red.

“Not officially,” Massie admitted. “But we’ve been texting about hanging out tomorrow night. He’s probably just waiting for
me to let him know the plan.” She nibbled her bottom lip, wishing she could sneak a quick text check.

“Josh’s been tweeting all week about how pumped he is to see me in my costume.” Alicia reached for a blood orange slice and
popped it in her mouth.

“Good.” Massie flashed a reassuring smile, to prove she was fine with Dylan and Kristen crushing on her exes. So getting two
of her crushes stolen had left her with more trust issues than the U.S. Treasury. But thanks to her new subliminal confidence-building
CD,
Surviving Male Betrayal,
she was guaranteed to lose those issues faster than Nicole Richie shed her baby weight. Or else Oprah and her book club would
have some serious explaining to do.

Just then, a deep, evil laugh boomed from the intercom. “MUUUUUUUUAAAAAHHHHHHAAAAAAAAAAAAHHHAAAAAAAAA.”

“Ahhhhhhhhhhhhhhhhhhhhhhhhhhhhhhhh!” the whole PC screamed. Claire panic-flung a gummy foot across the room. Dylan grabbed
the top off a Prada shoe box and held it in front of her like a shield. And Bean, Massie’s black pug, leapt off a bed of Hermès
silk scarves and made a beeline for Massie, her red silk cape fluttering behind her like she was an ah-dorable superhero.

“Sorrrrrry.” Layne plopped down next to Claire like she belonged there.

The PC insta-grabbed their phones.

Dylan:
K, did u invite Layne?

Dylan:
And the pants bite.

Massie:
Outfit should b 6 ft under.

Dylan:
Wonder if C invited her?

Massie took a giant gulp of her Draculatte to wash down the guilt lump starting to form in her throat. The truth was that
when Layne had complained in second-period French about not having a costume, Massie had mentioned where the PC would be after
school. Which meant she’d semi-invited the LBR. But she hadn’t
really
had a choice. When Dylan and Kristen had stolen ex-Derrington and ex-Dempsey, Layne had produced her brother Chris Abeley’s
ninth-grade friends. Including Landon Crane.

But most important, when Massie had been forced to hire actors for her new clique to make the old one jealous, Layne hadn’t
told a soul (or a Soul-M8).

“What’re you guys supposed to be anyway?” Layne piped up, double-knotting the green glitter laces on her black Converse sneakers.

“Huh?” Layne’s under-plucked brows inched toward each other as she helped herself to the tray of bite-size brownies, blood
oranges, and dark chocolate–covered popcorn.

Dylan smile-thanked Massie for the idea before yanking down the hem of her black Cosabella slip.

Massie beamed
You’re welcome
. This year, every girl in eighth was either dressing up like Bella Swan or one of the Cullen girls, which meant the vampire
trend was deader than dead. So she’d added an alpha twist.

“I get the tramp part.” Layne inspected Claire’s lace-trimmed burgundy slip. “But what’s the ‘pire’ part?”

“We’re not spray-tanning this year,” Massie explained. “So we’ll be super-pale.”

“Come on, Layne,” Claire said. “Let’s go find you a costume.” She pushed herself to her feet, then gripped Layne’s hands and
pulled her up too.

“Okay. But nothing trampy.” She followed Claire up the spiral staircase to the second floor.

“Style-sucker,” Alicia called after them. Her dark hair looked glossier than usual in the candlelight.

“Ah-greed,” Massie giggled, settling on the floor next to Kristen. Being back together with her friends felt better than one
of Jakkob’s post-highlight scalp massages. She pinky-swore to herself that she would never let crush issues crush the Pretty
Committee again.