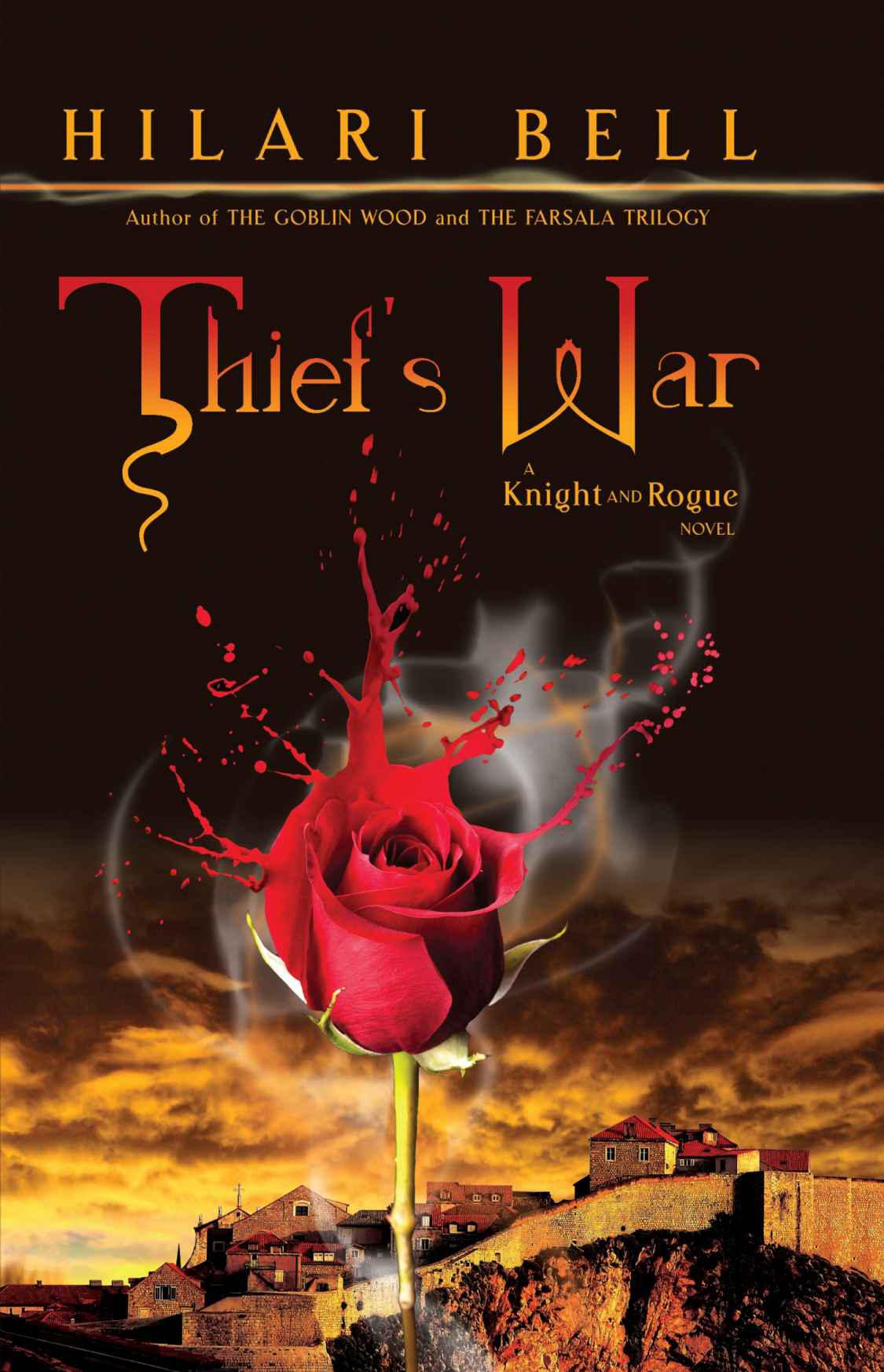 To Charles Bell, Wilson Bell and Joyce Griffen, a.k.a. Aunt Kelly, Uncle Bill and Uncle Chuck. You are missed.

The sounds of injustice reached our ears as we rode into the town square: shouted taunts, the mushy thump of soft fruit smashing against wood, and the low angry mutter of the crowd. It was a large crowd, for a smallish town—it looked like every adult in Casfell was out in the streets and our hound, True, moved in closer to the horses’ heels. There were so many people that at first I couldn’t see the object of their ire.

Fisk spotted it before I did. “There’s someone in the stocks.”

I followed his gaze and saw the flat wall of boards, two hands and a balding, gray-haired head emerging from it as if some obscene sportsman had mounted a kill there.

Fisk and I had seen these contraptions in several of the towns and villages we’d passed through lately. Except for the stocks, the towns appeared quite pleasant. The buildings were mostly made of plastered mud-brick in these treeless plains, roofed with thatch that glowed golden on days less overcast than this one. The stocks had been the only off note—and I’d not really believed that anyone would put them to use.

The law of the High Liege, which runs throughout the United Realm, is that crimes against property are paid in coin. If a man can’t pay another can redeem him, and he then works off the debt. Crimes of blood and pain are paid with the lash, or in extreme cases, maiming. And if life is taken, the noose.

These stocks, we were told, were an innovation out of the great city of Tallowsport, and that a man who owed coin and couldn’t raise it could pay back his victims and the law with this lesser pain. A “middle ground” of sorts. Though from what I could see, it might hurt as much as a flogging.

“He’s not a young man. After a few hours in that position his back will begin to cramp. A few more hours, and he’ll be in agony.”

’Twas too late now, for anyone to pay this man’s fine, but in any other part of the realm he’d have been allowed to work off his debt. A surge of anger, of the need to make this right swept over me. The Liege’s law shouldn’t have permitted this, but the Liege wasn’t here.

“Maybe they’ll let him out at sundown,” Fisk said hopefully. He knew what I was thinking. “That’s just a few hours off.”

Indeed, the gathering clouds, which we’d been hurrying to beat into town, made it seem almost dusk already. The low buildings, none more than two stories tall, did little to cut the cold wind that swept before the storm.

“And if no one was willing to put up coin to redeem him,” Fisk continued, “maybe he did something rotten enough to deserve this. Have you considered that?”

“Doubtful.” I gestured to the sullen townsfolk. “’Tis the guardsmen who are throwing fruit and insults. These people are angry with
them
.”

Indeed they were, an anger so bleak and dark that, True, who usually frolicked up to strangers for a pat, slunk behind us with his ears and tail drooping.

Fisk sized up the crowd with a gaze more expert than mine would ever be.

“There’s no way I can talk you out of this, I know. But we’ll have to wait till everyone’s gone to bed. You do realize that?”

I did. I also knew that ’twould gall Fisk to leave the poor man to suffer till nightfall as much as it did me. However…

“I’m not that foolish. He needs a crafty rescue, not a noble failure.”

“Then we might as well go to the inn, and get a room and a meal,” Fisk said practically. “And more information as well.”

I sometimes wonder if Fisk has quite forgiven me for rescuing Lady Ceciel—which I must admit, we shouldn’t have.

Almost a score of guardsmen, in the blue and brown tunics of the Tallowsport City Guard, were standing around the stocks. A daring daylight rescue would only bring Fisk and me to join their victim.

And remembering Lady Ceciel, a bit more information might not come amiss.

Still, a deep and helpless pity dragged at my heart as I turned my horse, Chanticleer, toward the inn at the far side of the square. Righting things like this was my chosen profession, and I was loath to let it wait.

“So,” Fisk said as a waitress in a clean cap and apron set plates down before us. “What’s all that about?”

Lanterns had been lit against the darkness of the oncoming storm, giving the large room a cozy air, and ’twas warm enough to hang my cape and Fisk’s coat on the pegs near the door. The taproom was redolent with the scent of roast pork, and the hefty helping of turnips, carrots and potatoes that accompanied it looked delicious. Despite my anxiety for the old man in the stocks, appetite stirred. We’d been riding all day.

“That’s a local problem.” The man who spoke sat on Fisk’s other side. He wore a blue cloth coat with brass buttons. A clerk, mayhap, or a well-to-do craftsman. “Bad business. But no matter for a stranger.”

“’Taint a local problem!” a stout man across the board from us said. This inn seated most of its customers in the old way, at a single long table with benches, though there were smaller, more private tables along the walls. For our needs, this common board was perfect.

“Judicar Makey may have been born in Casfell,” the stout man went on. “But he learned his law in Tallowsport. Those guardsmen are out of Tallowsport. Even those stocks are a Tallowsport perversion. Only thing local is the man in ’em! It’s a curst shame, and if our mayor was here it wouldn’t have happened!”

A number of voices chimed in to agree with that, and we soon had the story without having to ask more than a few questions.

The man in the stocks was a farmer named Ruffo. When the food train came through, Ruffo tried to sell them short measure, using crooked scales…or so the judicar who heard the case had claimed when he passed sentence.

Fisk and I had seen the long lines of freight wagons that hauled goods and coin out of the city and went back laden with food. Although in this early spring season, the only produce available was grain and a variety of hardy root vegetables, like those that vanished from our plates as we listened to the townsmen argue. The food trains were always accompanied by a large contingent of guards, which made sense, considering the coin they carried.

So what were those guards doing here, when the train had moved on?

Most of the townsmen said that Ruffo was an honest fellow who would never cheat on his scales, no matter how much he’d objected to the food train looting local larders. A smaller portion of the men around us thought that Ruffo hated the trains so much he might have cheated—but they seemed more admiring than disdainful.

Trust in the integrity of this Judicar Makey was notably lacking. Several men commented on how very well the judicar was doing these days, but no one uttered the word “bribery” aloud.

The argument was still rumbling on, and getting louder, when Fisk and I left the table and made our way up to our own room—a private room, which Fisk complained cost more than we could spare. But staging a daring rescue out of a room occupied by six other men was beyond even Fisk’s notion of economy.

Dex by Sheri Lynn Fishbach
Neverfall by Ashton, Brodi
Nobody Knows My Name by James Baldwin
Twenty-Six by Leo McKay
What If? by Randall Munroe
Norse Jewel (Entangled Scandalous) by Conkle, Gina
Prescription: Murder! Volume 1: Authentic Cases From the Files of Alan Hynd by Alan Hynd, Noel Hynd, George Kaczender
With Vics You Get Eggroll (A Mad for Mod Mystery Book 3) by Vallere, Diane
House of Cards by W. J. May, Chelsa Jillard, Book Cover By Design
The Arrangement 11 by H.M. Ward
Our partner